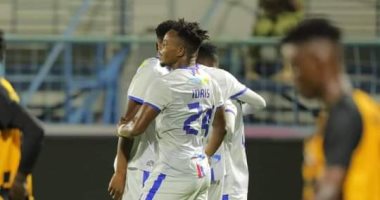 The Tanzanian Azam United team snatched the qualification for the 32nd round of the African Confederation Cup by winning a clean goal against its Somali host, Horseed, at Shamazy Stadium in Mbegala, Dar es Salaam in Tanzania, as part of the second leg of the preliminary round of the tournament..

Azam United, Tanzania, took advantage of their 3-1 victory in the first leg at their home stadium, to confirm their 1-0 victory today and qualify by 4-1 on aggregate.

The Somali Horseed failed to achieve a moral victory and compensated for its loss in the first leg, 3-1, and returned to lose again with a clean goal from its counterpart Azam United.

With this result, Azzam United of Tanzania will face its Egyptian counterpart Pyramids in the 32nd round of the African Confederation Cup.

In the first leg, the Tanzanian Azam United team achieved a 3-1 victory over its Somali counterpart, Horseeed, in the preliminary round of the African Confederation Cup..

The Pyramids team knew its rival Azam United of Tanzania in an unknown confrontation in the 32nd round of the CAF Confederation..