The subvariant of Omicron feared to be even more infectious than its ancestor strain is behind one in 30 Covid cases in England, according to official estimates.

A report by the UK Health Security Agency found the mutant BA.2 sub-strain accounted for 3.4 per cent of the country’s new infections by January 16 — and it is doubling every week. The growth advantage of the new variant is ‘substantial’, the health agency claimed.

Scientists believe it may have evolved to be slightly more transmissible than Omicron and could slowly become the UK’s dominant Covid virus. It is already outcompeting its parent variant in Denmark but the country’s Government deemed the strain such a non-threat it this week announced it was ending all Covid restrictions.

And Professor Paul Hunter, an epidemiologist at the University of East Anglia, told MailOnline there was no reason to panic about BA.2. He said it was not causing a ‘substantial difference to our current threat estimates’.

There had been fears it might have been slipping past vaccine immunity more easily than Omicron, which would explain its evolutionary edge.

But UKHSA analysis found two and three vaccine doses work just as well against both strains – providing about 70 per cent protection against symptomatic disease and even better immunity against severe outcomes.

Scientists have not yet been able to tell whether the sub-strain differs in severity from Omicron, which itself was a much milder variant that past strains.

However, there is nothing to indicate the strain would be any more deadly, with hospital admissions falling for thirteen days in a row.

It came as daily Covid cases, deaths and hospital admissions were down across the UK today as the country’s Omicron wave receded. Government dashboard data shows there were another 89,176 positive tests across the country in the past 24 hours, marking a 7 per cent decrease on last Friday.

There were 277 more coronavirus deaths registered in the UK today — down by around 4 per cent in a week. Meanwhile, latest hospital data shows 1,732 Britons were admitted with Covid on January 24, which was 12 per cent lower than the previous week and the 13th day in a row admissions have fallen week-on-week. 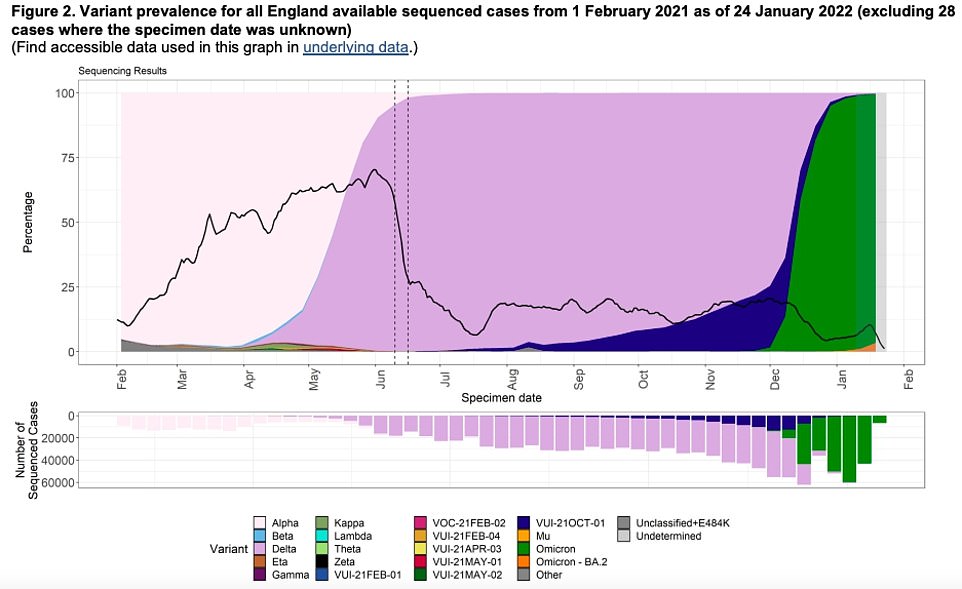 The highly infectious BA.2 variant (orange) already makes up 3.4 per cent of all new Covid infections in England, official data showed today. Graph shows: The proportion of all Covid cases made up by different variants over time 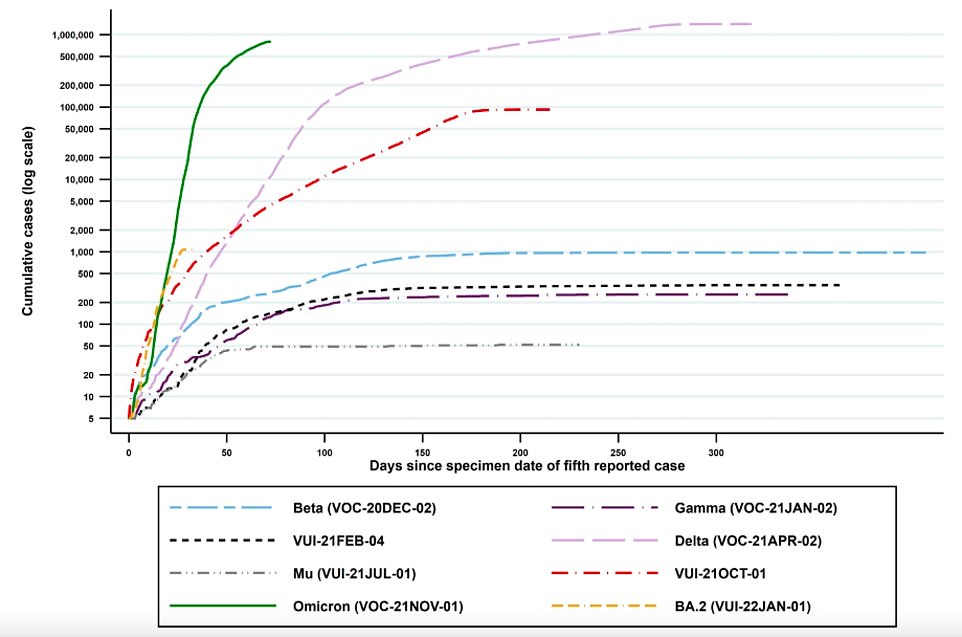 Graph shows: The rate at which BA.2 (yellow dashed line) has grown compared to Omicron (green line) since the fifth case of either variant was found 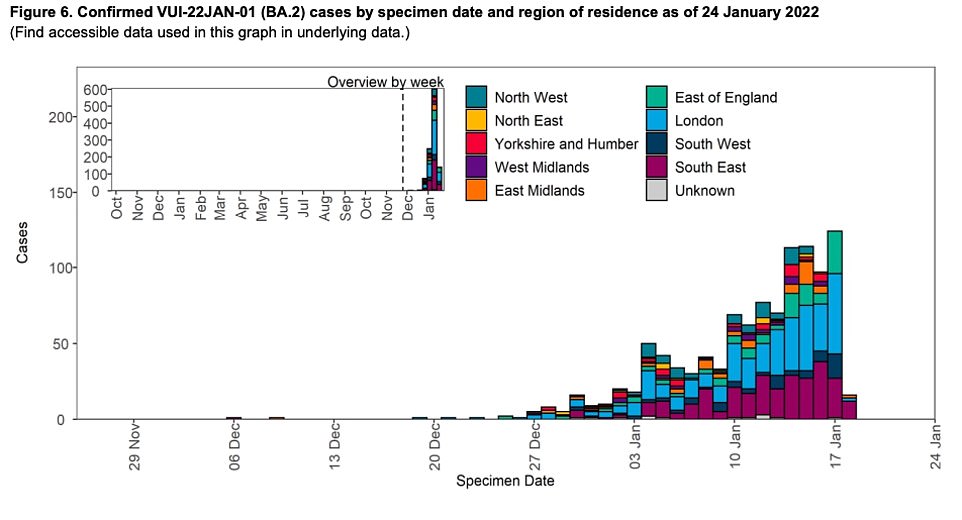 BA.2 had an increased growth rate compared to BA.1 in all regions of England, the UKHSA said. The growth advantage of the new variant is ‘substantial’, the health agency claimed. Graph shows: BA.2 growth in different regions in England up to January 17 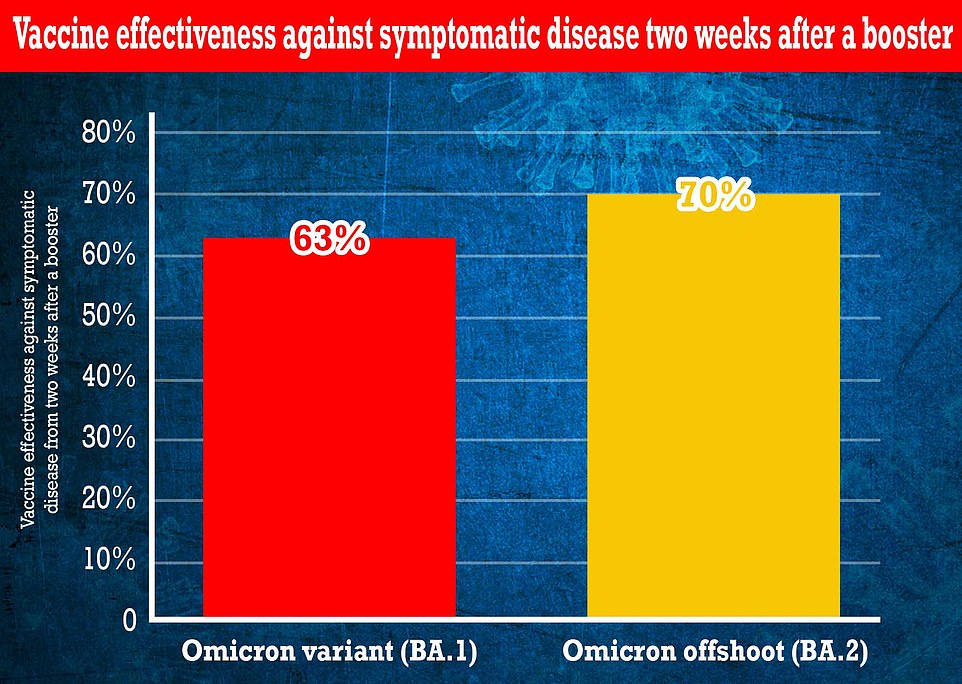 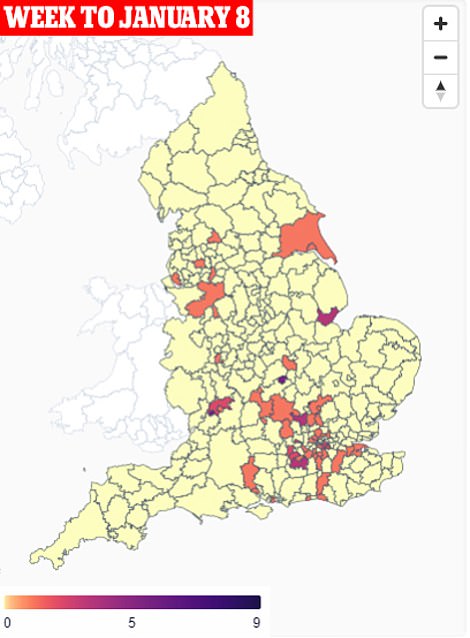 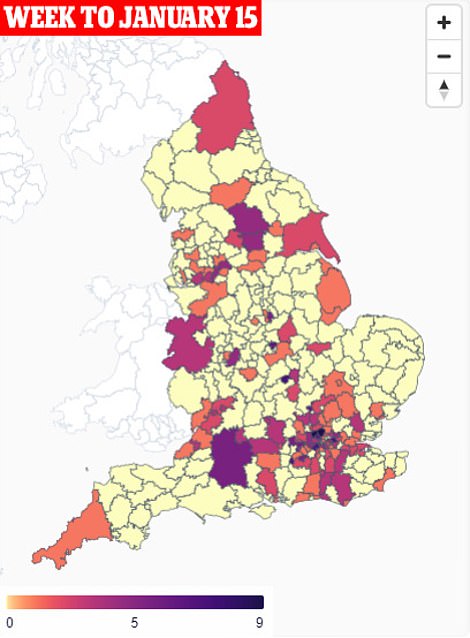 The above shows the number of BA.2 lineages detected by the Sanger Institute — one of the UK’s largest Covid surveillance centres — over the week to January 8 (left) and January 15 (right) broken down by local authority

What do we know about BA.2? Should we be concerned?

This is an off-shoot of the Omicron lineage.

It carries all the mutations of its parent, but also has a change that makes it harder to detect using PCR tests.

It has been spotted in 40 countries , including Denmark, the Philippines, India, Sweden and Singapore.

And the share of new cases caused by the variant has risen to one in 20.

Is it really harder to track?

Britain’s explosion of Omicron was fairly easy to track because of one of the variant’s specific quirks – a deletion of its spike ‘S’ gene.

It meant the strain could be detected on widely-used PCR tests without the need for lengthy laboratory analysis, known as genome sequencing.

The deletion allowed Omicron samples to stand out from other strains circulating at the time, including Delta, simply because they did not cause the same PCR ‘S-gene target failure’ effect.

PCR tests will still spot if someone with BA.2 has Covid.

Is it more dangerous?

It is already the dominant strain in parts of India and the Philippines, scientists say, with cases now rising in the UK, Germany and Denmark.

But there is no evidence to suggest it is more likely to cause serious disease.

There were fears it may be able to slip past vaccine immunity more easily than Omicron, which would explain its evolutionary edge.

But an analysis by the UK Health Security Agency found two and three doses of vaccines work just as well against both strains.

A booster was found to give 70 per cent protection against symptomatic infection from BA.2, compared to 63 per cent with the original Omicron.

Dr Tom Peacock, one of the first scientists to warn the world about Omicron, says there is no reason to be overly concerned.

The Imperial College London expert said he thinks the variant will not have a ‘substantial impact’ on the current wave.

Professor Francois Balloux, a geneticist at Imperial College London, says people not obsessed with Covid should treat it as the same disease as Omicron.

The strain has been designated as a variant under investigation by the UK Health Security Agency.

How many cases are there?

A total of 426 BA.2 cases were identified by the UKHSA by January 21, the earliest of which was dated to December 6.

But the true toll of BA.2 cases will be much higher, with just a small fraction of positive tests sequenced.

The UKHSA sequencing data shows that 96.1 per cent of cases up to January 16 in England were the original BA.1 variant of Omicron.

They also found 13.4 per cent of household contacts of people infected with BA.2 go on to catch the virus themselves. This compares to a slightly less rate with the BA.1 strain (10.3 per cent).

The UKHSA said: ‘In early UK data there is evidence of increased growth of BA.2 compared to BA.1 in community cases in all regions of England where there are sufficient cases to assess.

‘This growth advantage is visible in some other countries but is not clearly the same across all countries with genomic surveillance at present.

‘This may be related to differences in timing and level of exposure to BA.1 but requires further exploration.’

But other experts have warned people not to become panicked by the strain’s apparent higher transmissibility, arguing it should have little impact on Britains trajectory out of the pandemic.

Professor Hunter told MailOnline BA.2 could make up as much as eight to 10 per cent of cases as of today, although that prediction comes with ‘big uncertainty’.

However, he said: ‘As far as I can discover there is currently no evidence that BA.2 causes any more severe disease than the other Omicron variants, though it is early days.

‘As far as I can judge the consensus is that BA.2 will become the dominant variant sometime in the next month or two though the clinical significance is not going to be that different from other omicron variants.

‘So I don’t think it changes anything too much, though it will provide a bit of a bump in the round back to normality.

‘I don’t think this will lead to a substantial difference to our current threat estimates but as I say still early days.’

Professor Jonathan Ball, a molecular virologist at the University of Nottingham, said: ‘Early indicators suggest that the vaccines will provide similar levels of protection as we have seen for Omicron, so this is good news. Whether or not it causes more severe disease will become apparent as more data is collected.

‘Of course, it is important to keep monitoring the situation and try to gain a better understanding of how this variant behaves, but so far there is nothing in these early analyses to worry us unduly.’

Dr Tom Peacock, one of the first scientists to warn the world about Omicron, previously said there is no reason to be overly concerned about the variant.

The Imperial College London expert said he thinks the strain will not have a ‘substantial impact’ on the current wave.

Professor Francois Balloux , a geneticist at Imperial College London, said people not obsessed with Covid should treat it as the same disease as Omicron.

Unlike the original Omicron, BA.2 infections can only be confirmed through lab analysis rather than a PCR, which has made tracking its spread more difficult and seen it nicknamed a ‘stealth’ variant.

Scientists believe BA.2 may have evolved to be slightly more transmissible than Omicron and could slowly become the UK’s dominant Covid virus.

The original Omicron strain has a specific alteration — known as an ‘S’ gene dropout — which meant it could be detected through PCR tests without the need for lab analysis.

It doesn’t mean that BA.2 is undetectable by PCR, but samples will need to be sent for further analysis to confirm it is the sub-variant.

It is likely that anyone who has already caught Omicron has strong protection against this variant.

But scientists in Denmark are investigating a handful of cases where someone who previously had Omicron later caught BA.2.

Professor Francois Balloux, a geneticist at University College London, said it was difficult to know whether Denmark’s spiralling cases were fuelled by BA.2 or if it had just ‘surfed’ the Omicron wave of infections.

He added to MailOnline: ‘The high prevalence in Denmark might stem from their low rate of hybrid immunity (which is vaccines plus previous infection).’

Professor Balloux said it would ‘come as a surprise’ if BA.2 triggered another wave of cases in the UK.