Backpackers are picking fruit for $1 an hour and suffering horrific abuse at work, survey finds


Fruit and vegetable pickers in Australia are working up to 20 hours a day and for as little as $1 an hour, according to a shocking new report seen by Daily Mail Australia.

Piece-rate workers on grape and zucchini farms sometimes earn as little as $9 per day while blueberry farm workers can earn just $10 per day, according to a survey of 1,300 pickers by Unions NSW and the Migrant Workers’ Centre.

Under Australian law, farmers do not have to pay the minimum wage to piece-rate workers, who instead get paid for the amount of fruit they pick. 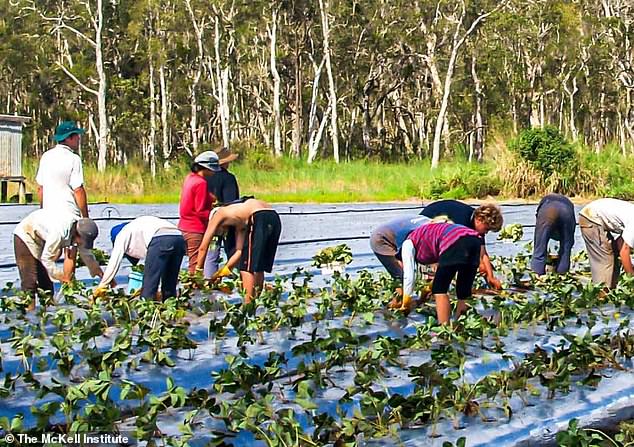 Fruit pickers in Australia are working up to 20 hours a day and for as little as $1 an hour, a shocking new report has revealed. Pictured: Backpackers on a farm in New South Wales

The survey, conducted between September and February, appeared to show that conditions are still bleak for many horticulture workers, who are mostly immigrants, despite a huge labor shortage due to the Covid-19 border closure.

The federal government has even offered $6,000 relocation payments to workers who move from cities but farmers still cannot get enough Australians to fill roles.

Farmers say the best pickers can earn well above the minimum wage and argue the system is needed to make sure workers are doing their jobs – but unions say it leads to exploitation and want a minimum hourly rate instead. 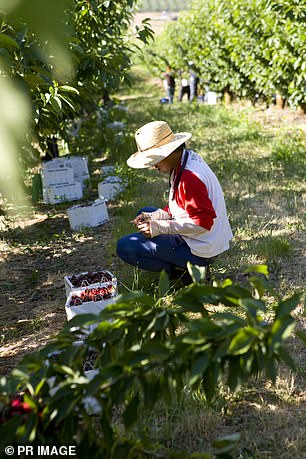 The rule – which is outlined in the Horticulture Award – is currently under review in the Fair Work Commission.

The results of the survey are in a report titled ‘Working for $9 a day; Wage Theft and Human Rights Abuses on Australian Farms’ which also recorded several reports of sexual harassment and abuse.

Stories of harassment in the industry are common and regularly reach the national media. Last year, for example, one backpacker said she was forced to clean her manager’s sprinklers wearing only a bikini.

Dozens of workers also said they had worked in return for only accommodation and food, were charged transport fees for a lift to work, or were forced to accept overcrowded accommodation provided by their employers.

Mark Morey, Unions NSW Secretary, said that workers are being treated like ‘pawns’ and huge overhaul is needed.

‘Farmers and the National Farmers’ Federation have made fantasy submissions to the Fair Work Commission, claiming that the piece rates system allows workers to earn above the minimum wage.

‘However the toxic reality is that the overwhelming majority of workers in this sector are being ripped off,’ he said.

‘They are also being treated like pawns, with about 12 per cent of those surveyed having worked as many as 20 hours a day under piece rates at least once, while a quarter of respondents say they have had shifts as short as one hour a day,’ Mr Morey added.

The report also found that 63 per cent of workers were not given a choice between working on a piece-rate or an hourly rate, as required by the The Horticulture Award.

Some 84 per cent of respondents were on a temporary visa, while 11 per cent were Australian citizens and five per cent were permanent residents. 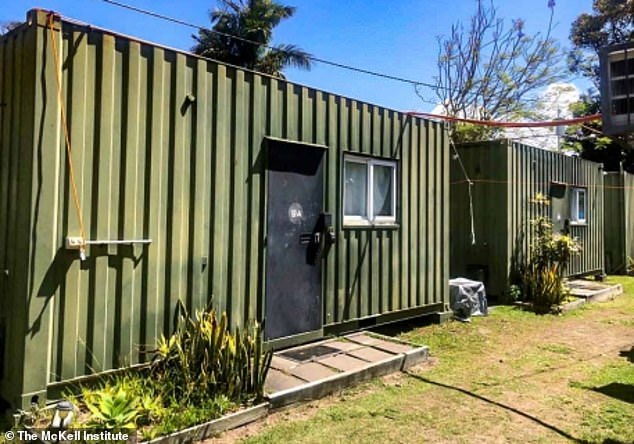 This converted shipping container housed four Pacific Islander farm workers for $120 each per week. The landlord was making $480 per week on one container- the same price as a three-bedroom house in the Coffs Harbour region

‘All workers, regardless of where they’re from or their visa status, deserve to earn a living wage, work in safe conditions, and be treated with dignity and respect,’ he said.

‘Many are also responsible for injuries sustained by workers, along with discrimination, bullying, sexual assault and harassment.’

The report recommends that the Fair Work Commission should amend the Horticulture Award to guarantee workers are paid at least the minimum wage.

The authors also want to see stronger oversight of backpackers’ accommodation to make sure housing laws are adhered to and changes to the visa system to allow fruit pickers a pathway to permanent residency.

It comes after an investigation by The McKell Institute in December found blueberry pickers in the Coffs Harbour region of New South Wales are being as little as $3 an hour and forced to stay in cramped, overpriced accommodation.

Some have even been scammed by dodgy labour hire firms who issued fake payslips but never actually transferred the workers their money.

Australian backpacker Sally realised she had been scammed by a subcontractor when her pay failed to show up in her bank account.

She messaged the person who hired her on WhatsApp but was spammed with 2,000 messages calling her a ‘dog’ and a ‘pig’.

The labour hirer was not registered with an ABN and contact details on the payslips did not work.

Researchers who spent 12 weeks on the mid North Coast during the 2020 picking season also found several examples of workers being grossly underpaid.

Some were given as little as $7 a bucket to pick low-quality fruit – which sometimes worked out as $3 an hour – well below the award rate of $24 an hour.

In one case, 28 year old German worker Jonas earned an average of just $6.21 per hour for 17 days of back-breaking work.

Other backpackers described common employment arrangements where accommodation, transport, food, and even vital equipment like gloves and berry containers had to be bought directly from farm owners, reducing daily earnings. 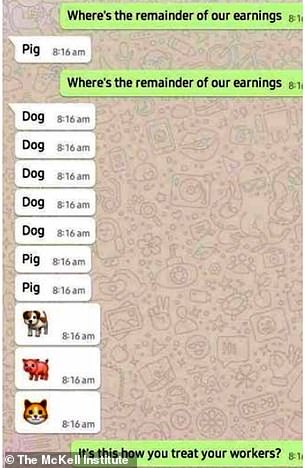 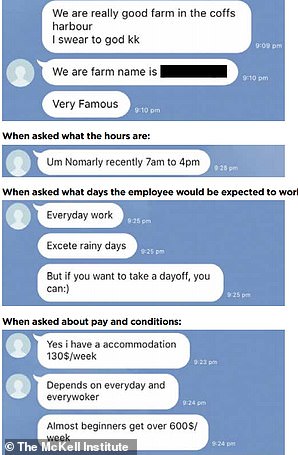 Left: Australian backpacker Sally was spammed with 2,000 messages calling her a ‘dog’ and a ‘pig’ by her labour-hire firm boss. Right: One undercover investigator messaged a hiring company which offered a job picking fruit at $3.50-$4 per kilo in September 2020

The investigation found that labour hire companies use Facebook, WeChat and Gumtree to falsely promote fruit-picking as fun work and lie about the potential wages.

One undercover investigator messaged a hiring company which offered a job picking fruit at $3.50-$4 per kilo in September 2020.

Via Asian messaging app Line, the contractor said the workers would pick for 63 hours a week from 7am to 4pm every day, earning $600 at just $9.50 an hour.

Exploitation and wage theft: What did the report find?

No worker shortage in Coffs Harbour

The COVID-19 outbreak actually increased numbers of migrant workers (mainly Working Holiday Makers) to around 2000 in the Coffs area during the study.

The rapid growth of industry has led to bad behaviour

An increase of blueberry farms over five years has resulted in an influx of labour-hirers who exploit an abundance of short-term workers.

Backpackers are being set up for exploitation

Tourists on the Working Holiday Maker visa wanting to extend their stay are vulnerable to underpayment, because of rules requiring them to work 88 days in regional Australia.

Wage theft is a business model

Some workers have alleged gross underpayments as low as $3 an hour, orchestrated through the systemic abuse of piece-rates.

The report said there was a ‘considerable’ power-imbalance between employers and workers because backpackers are required to complete 88 days of farm or mining work to qualify for a second-year visa to stay in Australia.

‘These foreign workers are often aware they are being exploited, but feel frightened and uncertain about making formal complaints,’ Mr Cavanough said.

‘Those who do complain often face hurdles like language barriers and bureaucratic delays which means their allegations are never investigated.’

‘This shocking new report can be added to the mountain of research indicating that Australian farms have become a hotbed of wage theft, exploitation, and worker abuse. It’s not just Coffs Harbour either – pick a spot on the map, and you will find outrageous exploitation,’ Mr Walton said.

‘This idea that exploitation is limited to a few bad apples needs to be done away with. This is a sector defined by and built on illegality.

‘By turning a blind eye, the government has created a system of rules and structures that rewards labour abusers and punishes those operators doing the right thing.

‘We’d like to see good farmers stand with us and call out the bad operators, rather than staying silent and let the rip offs continue.’

In December Agriculture Minister David Littleproud – who has described wage theft as ‘disgraceful’ – said he is open to a royal commission but changing the law to better protect workers would be quicker.

‘Look, you never say never to a royal commission, but I think you need to work through these issues calmly and make sure that you use common sense about how you can address it,’ he said.

‘You can address it with legislation and if you can do that quickly, then why go through the torture of a long, protracted royal commission when you could, in fact, rectify this with legislation and particularly if it’s harmonised across the country? That would be a far stronger leadership way in which to deal with this.’

The McKell report outlined a range of reforms including a crackdown on rogue recruiters, stronger penalties, greater enforcement from workplace investigators, reforms of Australia’s visa schemes and new laws to ensure farmers are required to pay a minimum hourly rate. 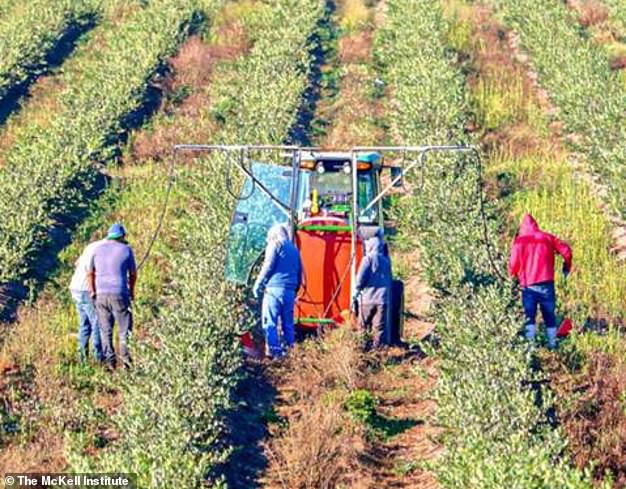 AWU National Secretary Daniel Walton has called for a royal commission to investigate exploitation. Pictured: Workers on a farm

Euro 2020: Watch all the angles of Schick’s halfway wonder goal

Euro 2020: Watch all the angles of Schick's halfway wonder goal