Phoebe Dyvenor and Priyanka Chopra were among the first stars making their arrival at the 2021 British Academy Film Awards ahead of the virtual ceremony at London‘s Royal Albert Hall on Sunday.

The actress opted for a dramatic black gown as she arrived on the socially-distanced red carpet, while Priyanka wore a more androgynous look in the form of a red embroidered jacket and white harem trousers.

This year’s BAFTAs will see the most diverse list of nominees in the awards show’s history compete to win a coveted gold mask, with stars including Anthony Hopkins and Vanessa Kirby nominated for the top prizes.

Gorgeous: Phoebe Dyvenor and Priyank Chopra were among the first stars making their arrival at the 2021 British Academy Film Awards ahead of the virtual ceremony at London’s Royal Albert Hall on Sunday

Phoebe, who starred in Netflix’s Bridgerton, sported a gorgeous black tulle gown with a fishtail hem as she made her way along the red carpet.

She opted for a touch of added glamour in the form of emerald jewel earrings, and her tresses styled in loose curls as she arrived ahead of presenting one of the awards.

Elsewhere Priyanka donned a more androgynous look with a statement red jacket covered with gold embroidery, which thanks to its open front offered a glimpse of her ample cleavage.

The Bollywood star teamed it with white harem trousers and black heels, with a pale blue tassel necklace for a touch of sparkle.

Priyanka was joined by her dapper husband Nick Jonas for the occasion, and the US singer ensure he caught the eye in a black tuxedo. 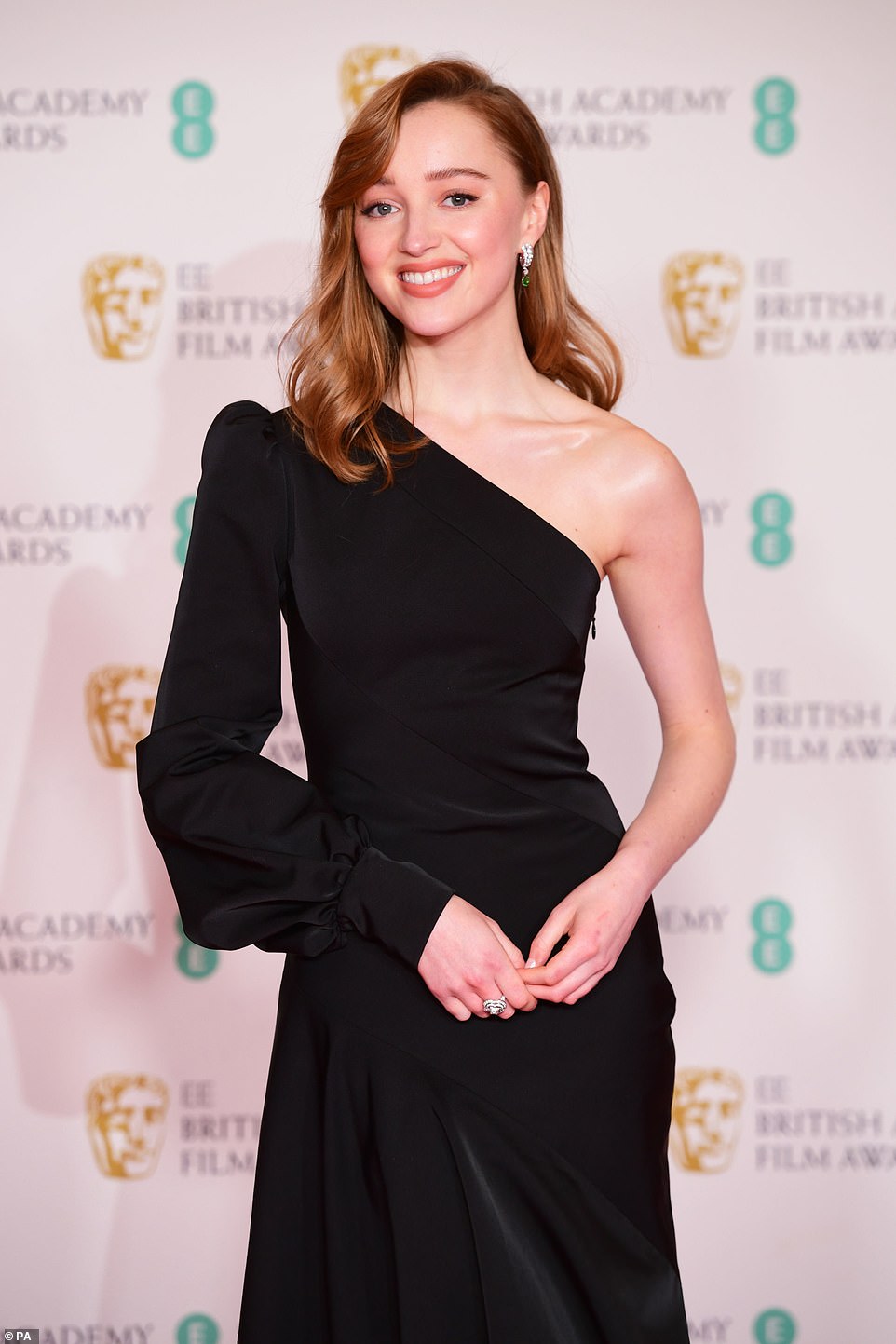 Beautiful: The actress opted for a dramatic black gown as she arrived on the socially-distanced red carpet 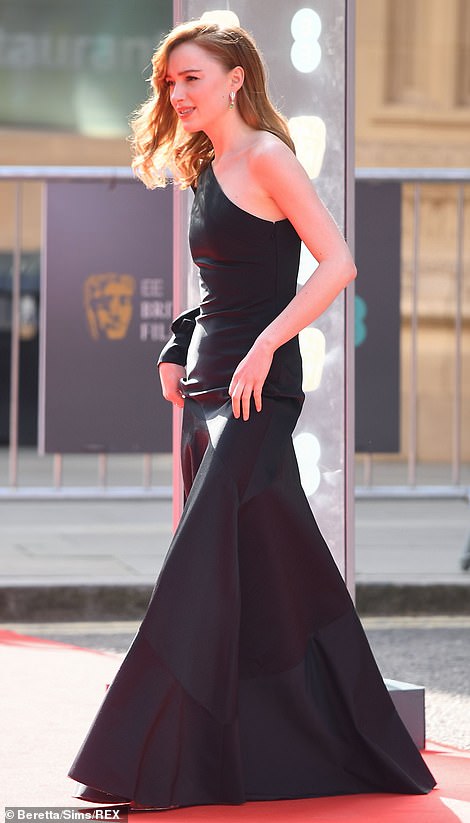 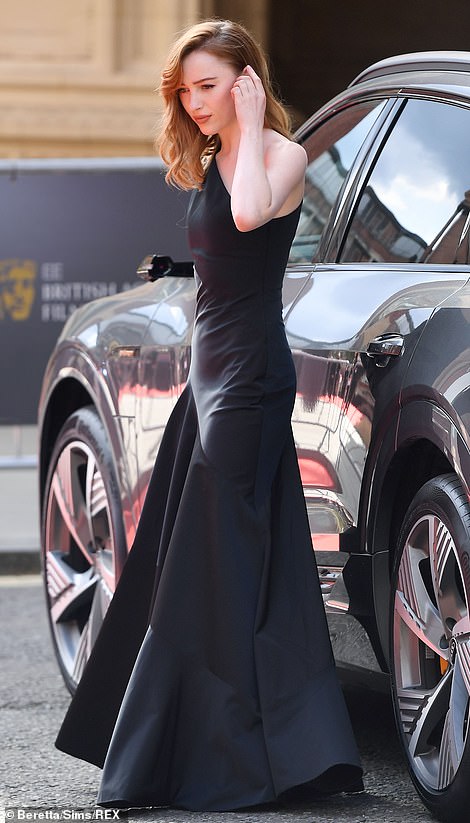 Stunning: Ahead of the red carpet Phoebe was seen making her way into the ceremony, sporting her gorgeous black gown with a fishtail hem 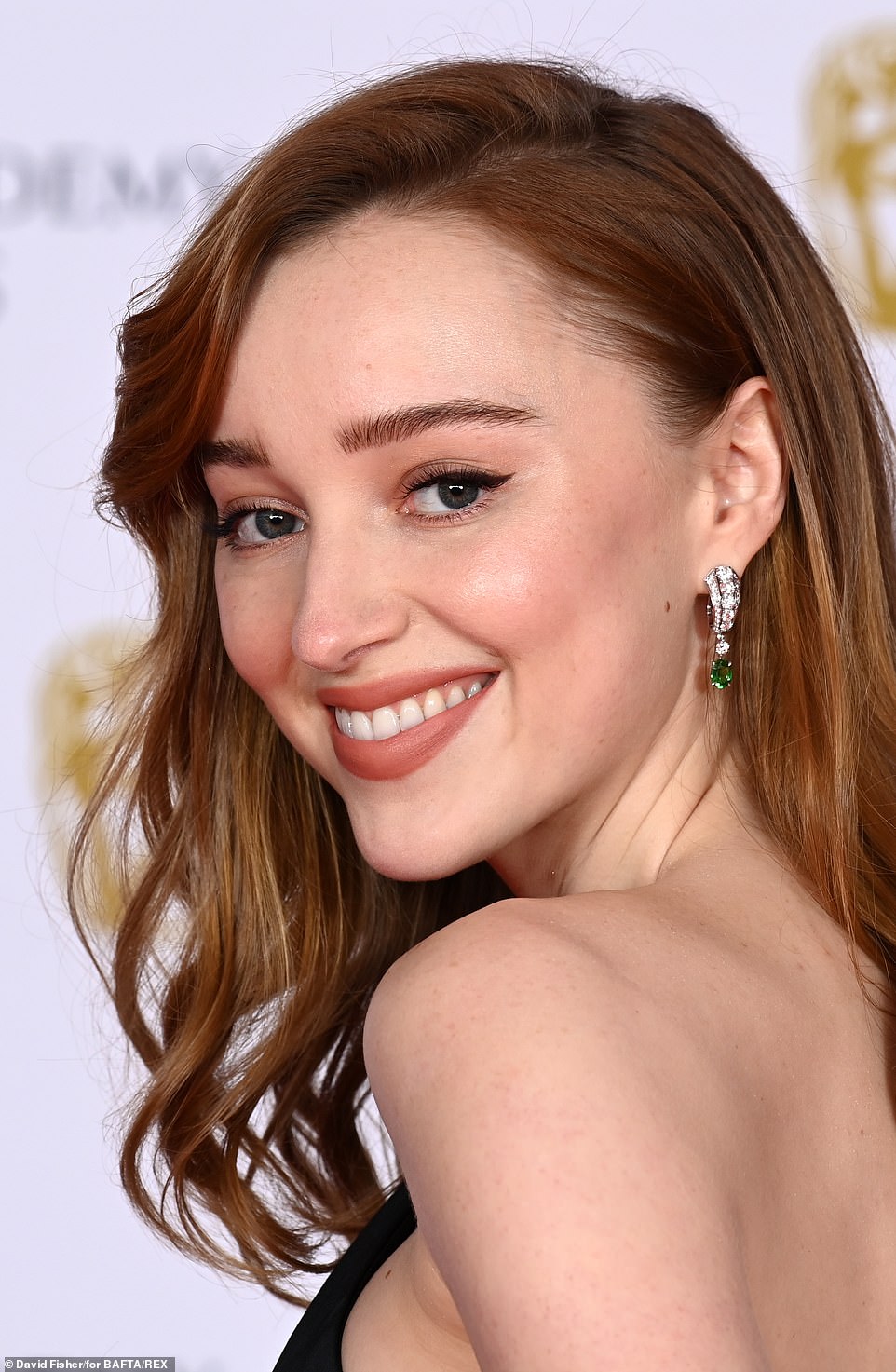 Flawless: Phoebe opted for a touch of added glamour in the form of emerald jewel earrings, and her tresses styled in loose curls as she arrived ahead of presenting one of the awards 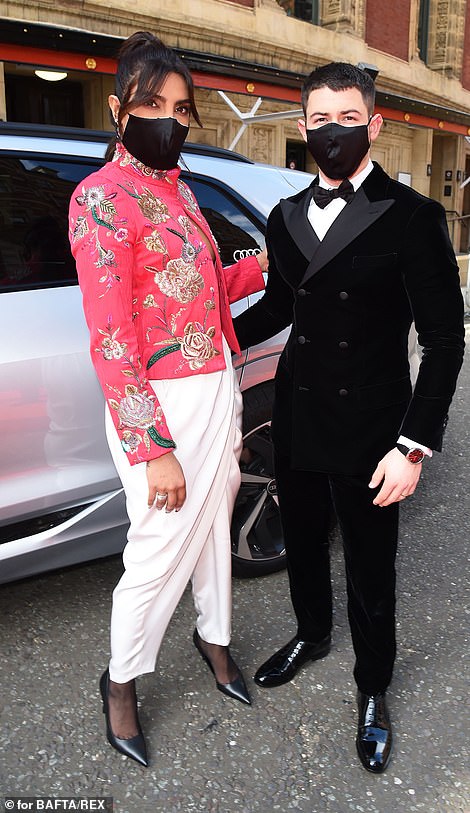 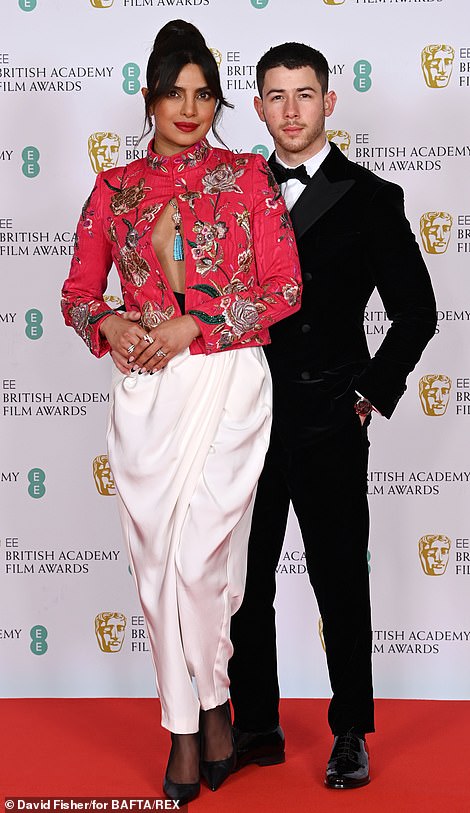 Together: Meanwhile Priyanka was spotted making her way into the ceremony alongside her husband Nick Jonas, with the pair ensuring they adhered to Covid restrictions by wearing their masks (left) before walking the red carpet (right) 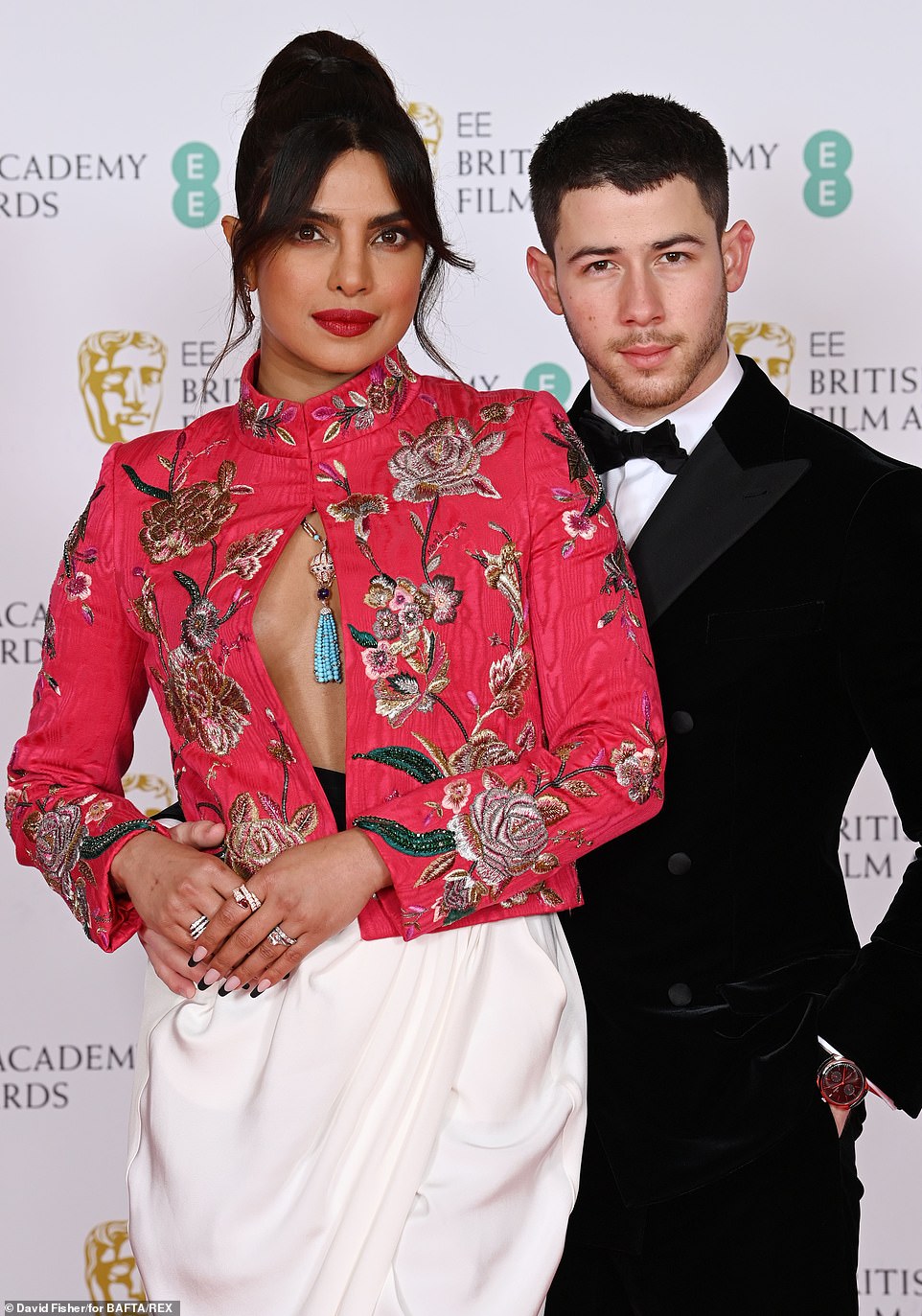 Cosy: Priyanka Chopra and her husband Nick Jonas also put on a loved-up display as they arrived together for the evening 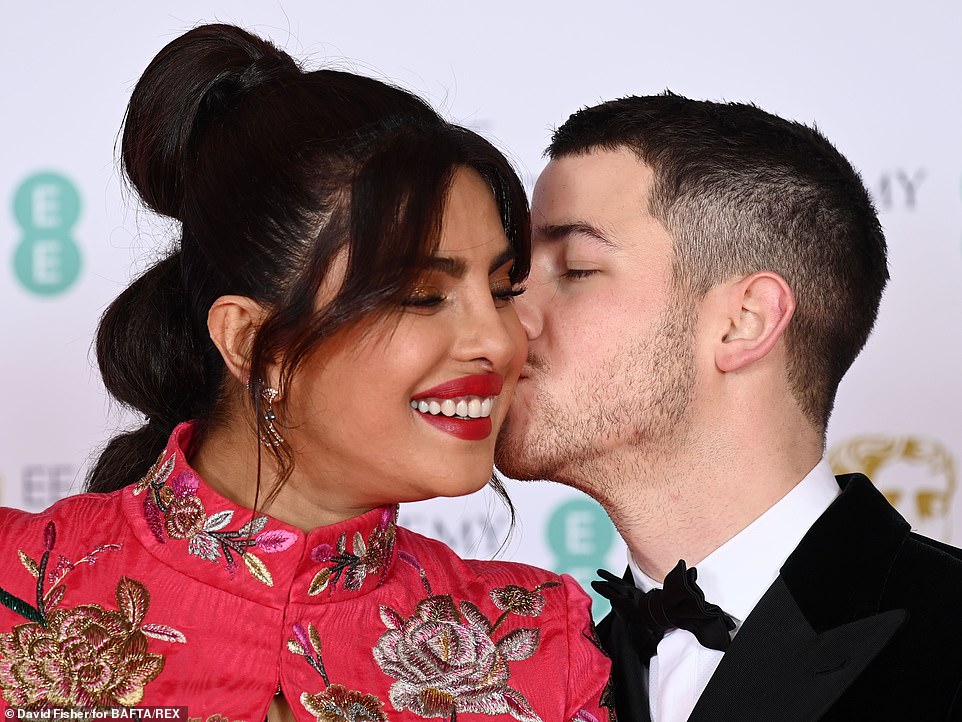 Cute: The couple put on a cosy display as they headed into the awards ceremony together 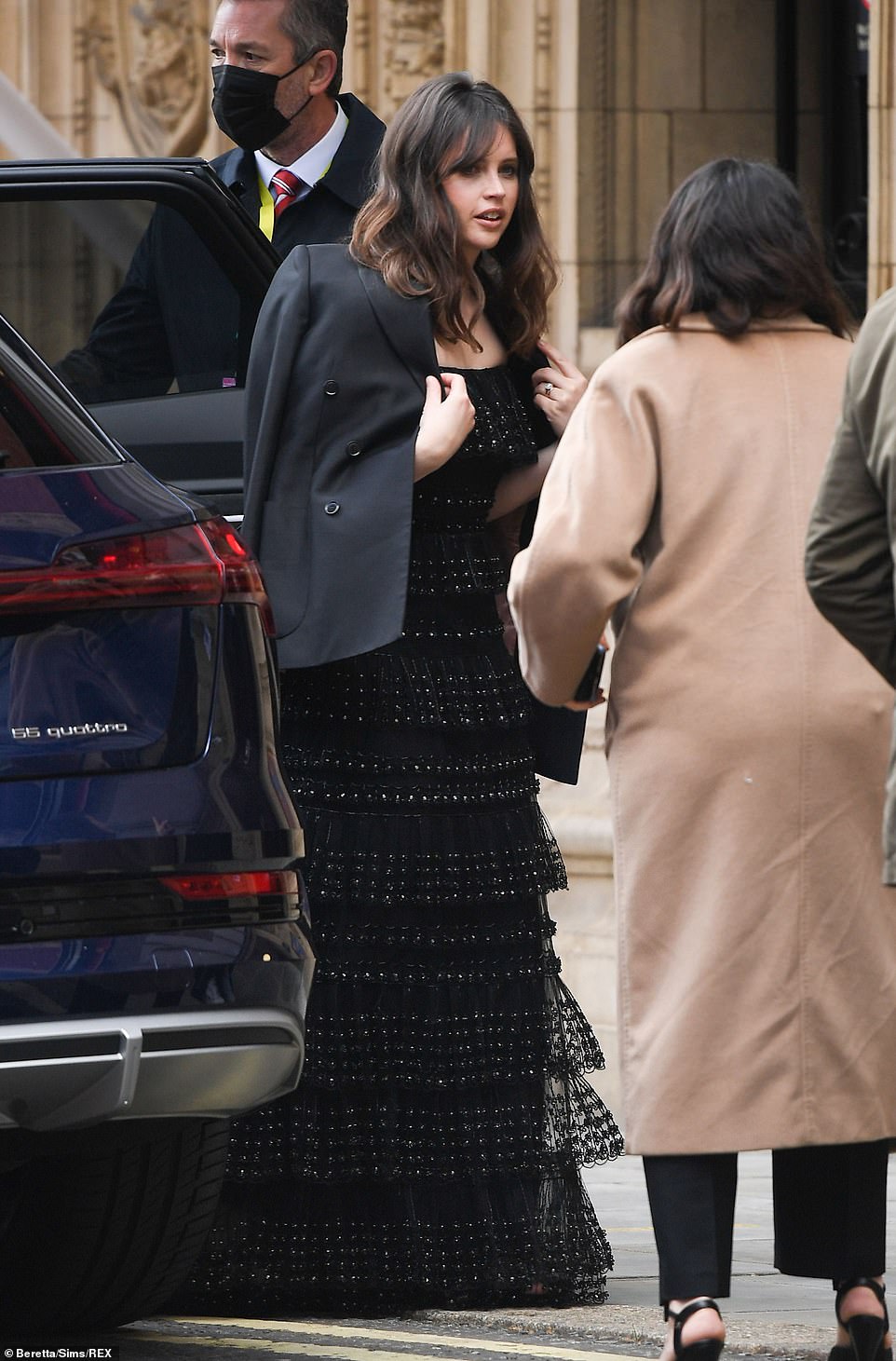 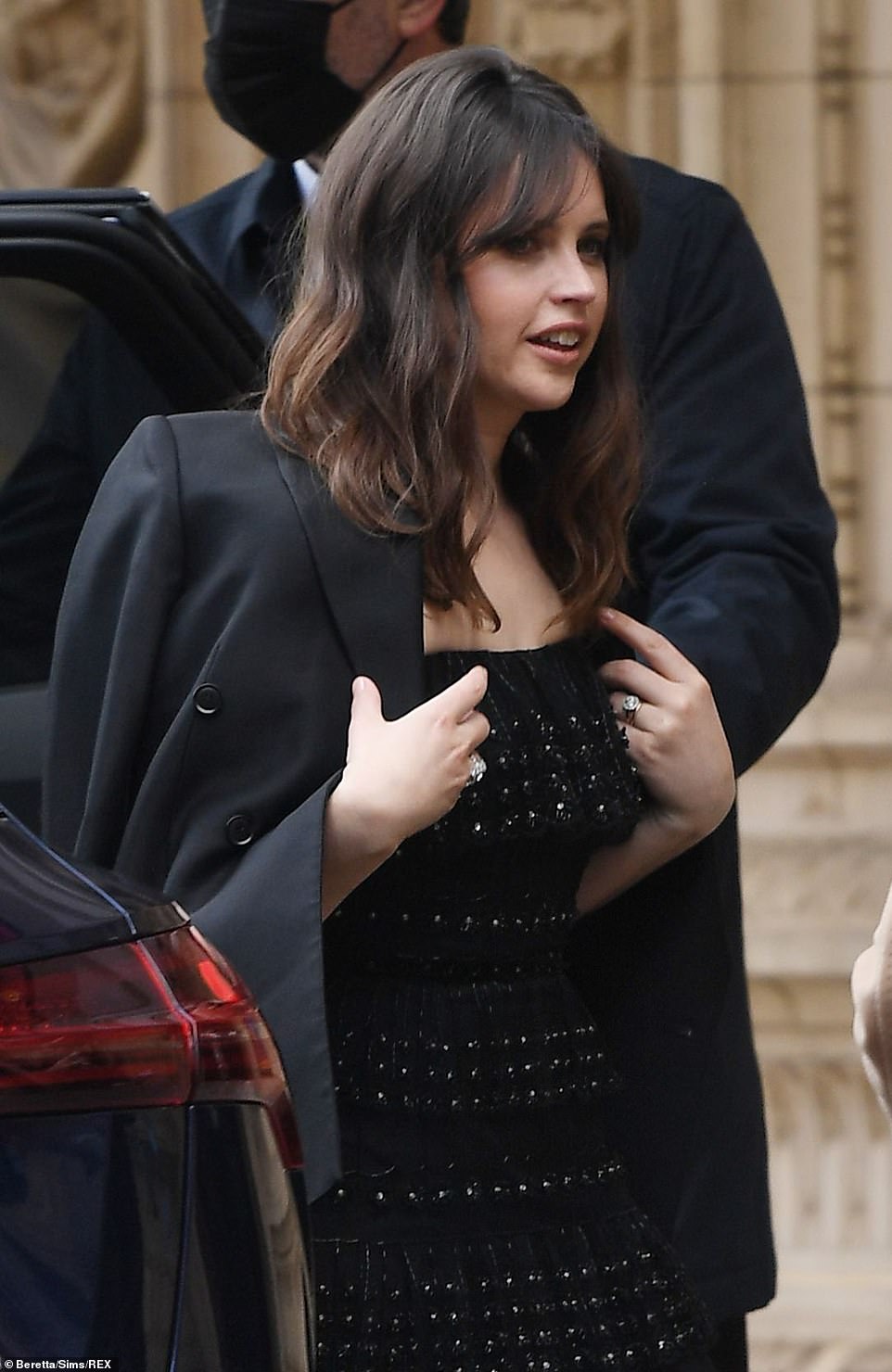 Beauty: The actress, 37, draped a tailored black blazer over her shoulders and styled her brunette tresses in soft waves 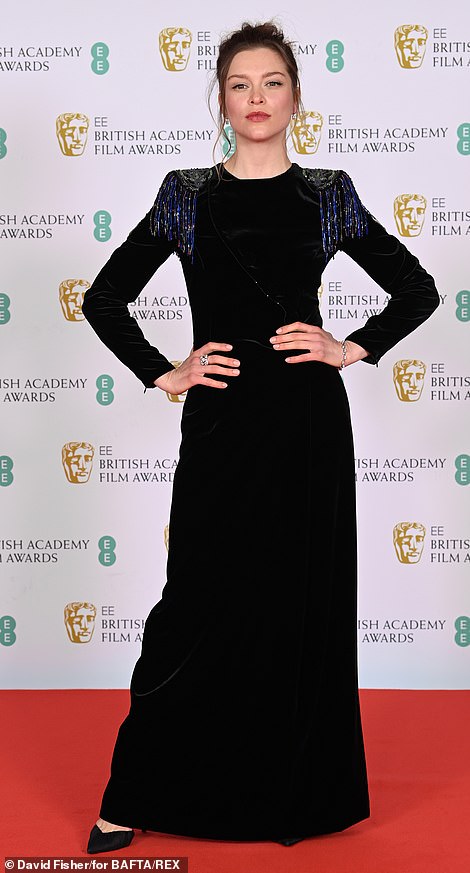 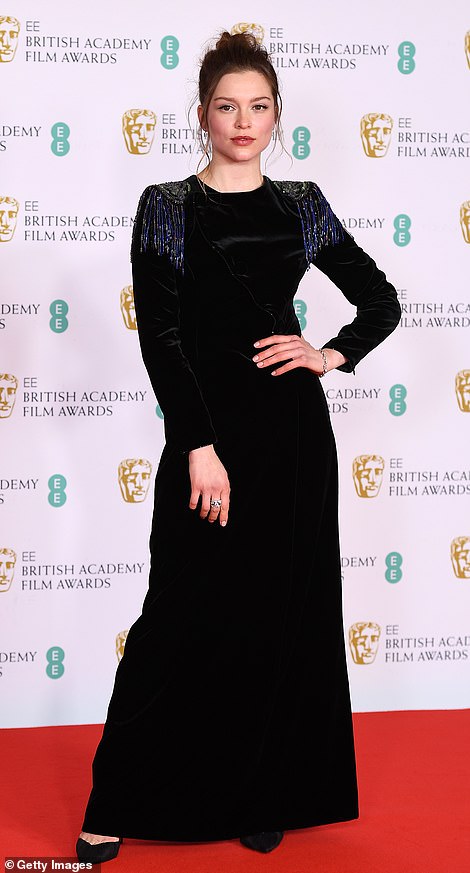 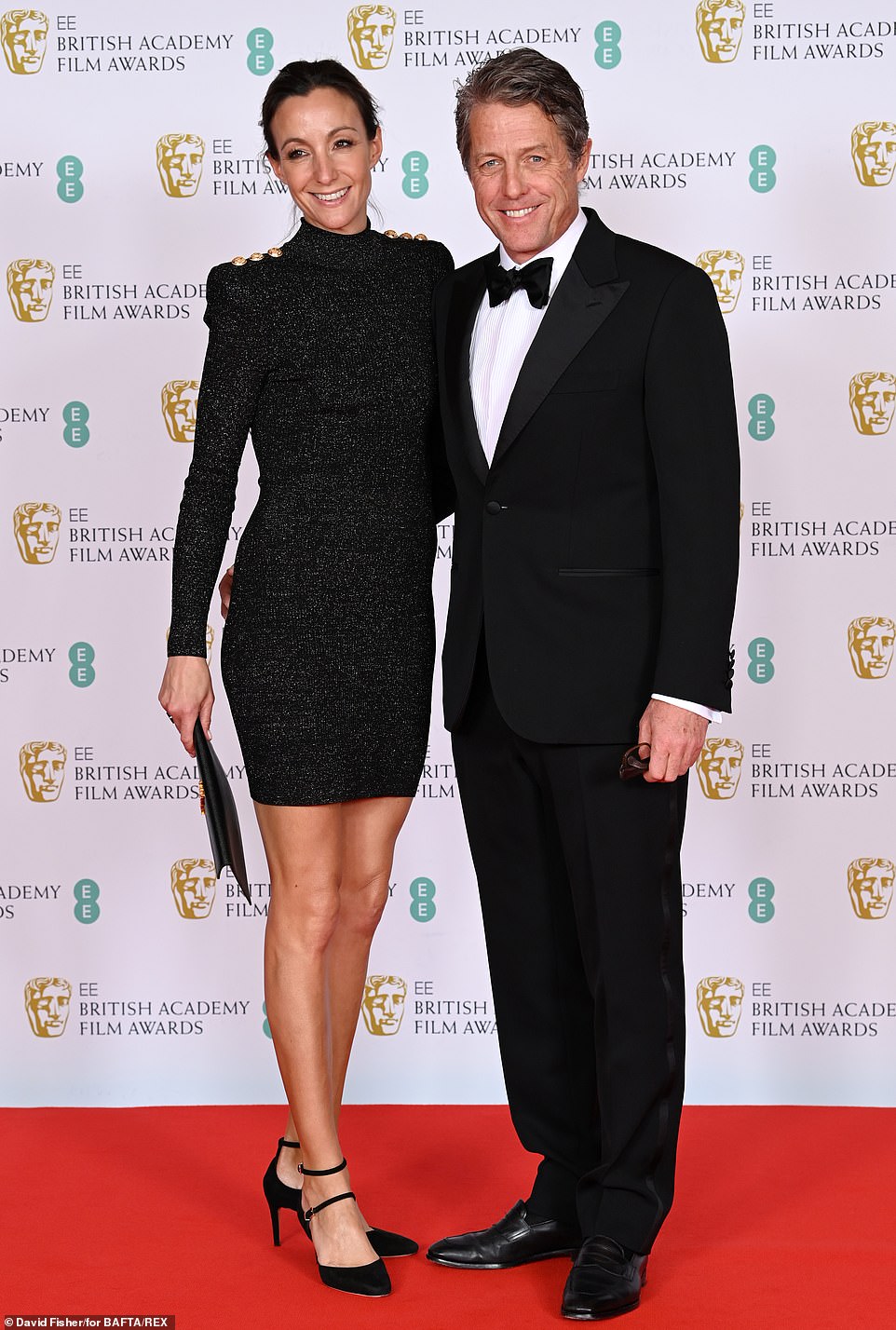 Dressed to impress: Hugh Grant and his glamorous Anna Elisabet Eberstein put on a united display as they hit the red carpet 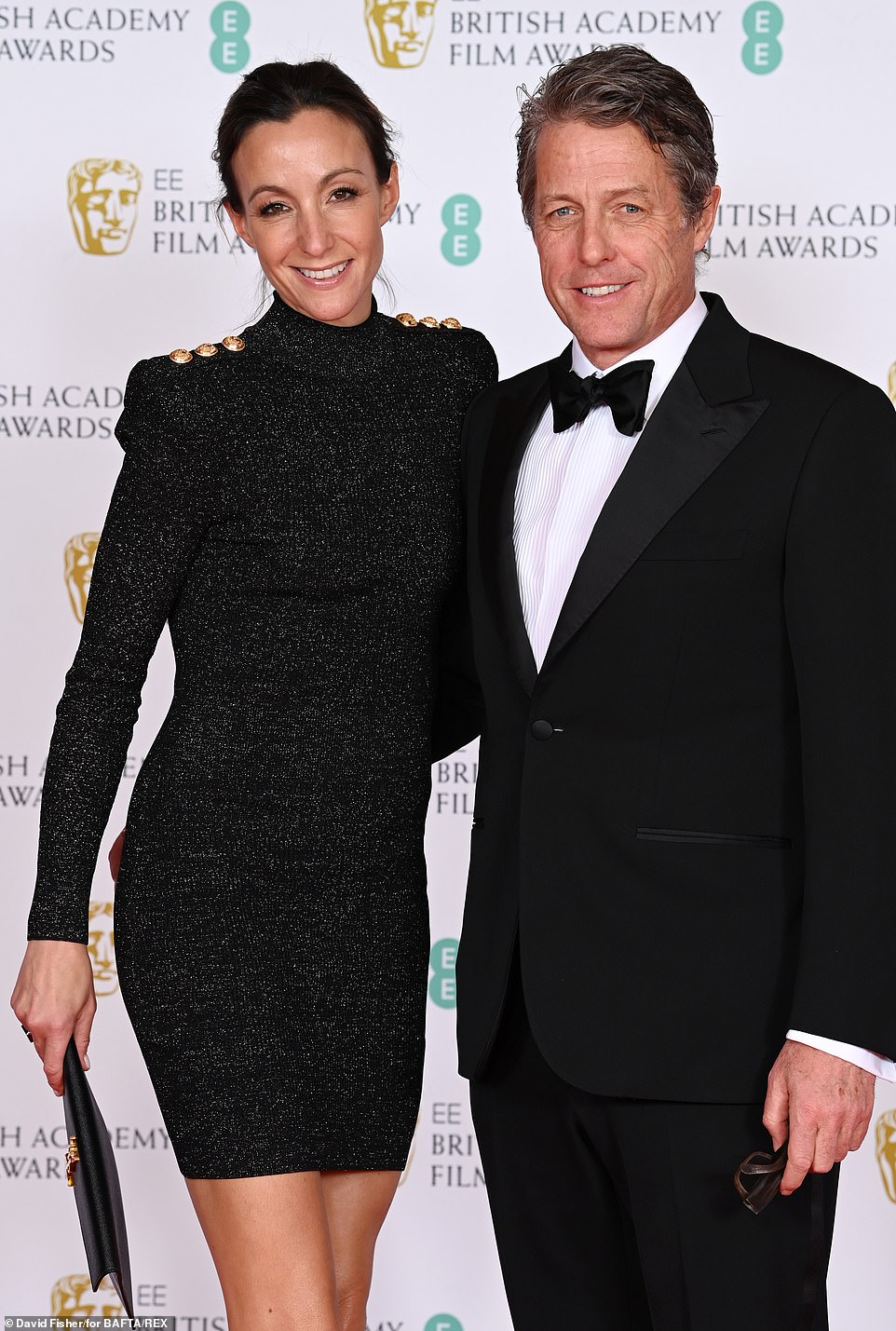 Looking good: The actor, 60, cut a dapper figure in a black suit and bow tie, while Anna put on leggy display in a black sparkly minidress

Clara Amfo looked effortlessly stylish in her plunging black suit as she made her way down the red carpet ahead of the virtual ceremony.

The presenter’s two-piece boasted a funky black fringed detailing, and finished the look with matching heels.

Clara was joined by singer Celeste, who sported an eye-catching deep green gown as she arrived for the ceremony. 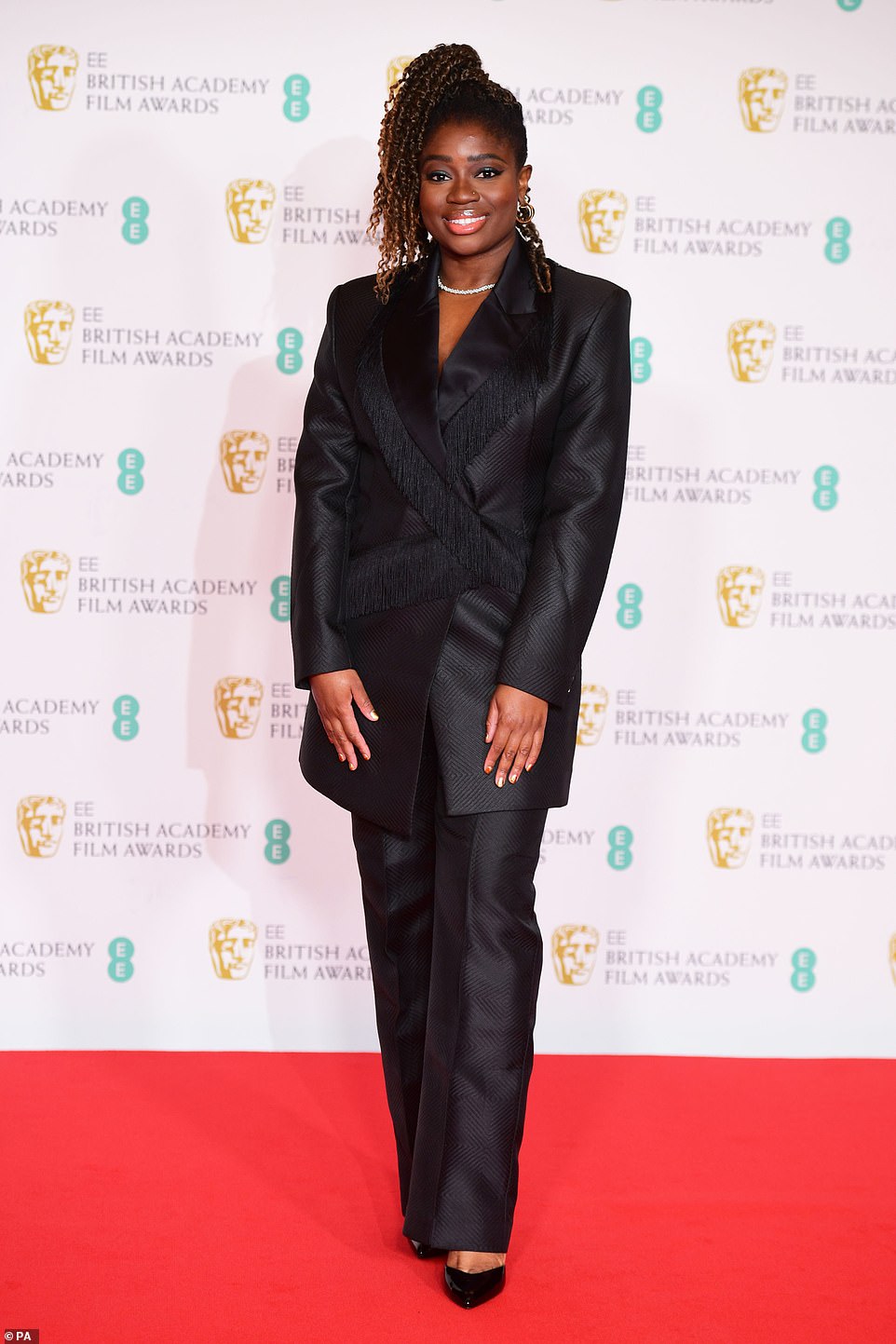 Looking good: Clara Amfo looked effortlessly stylish in her plunging black suit as she made her way down the red carpet ahead of the virtual ceremony 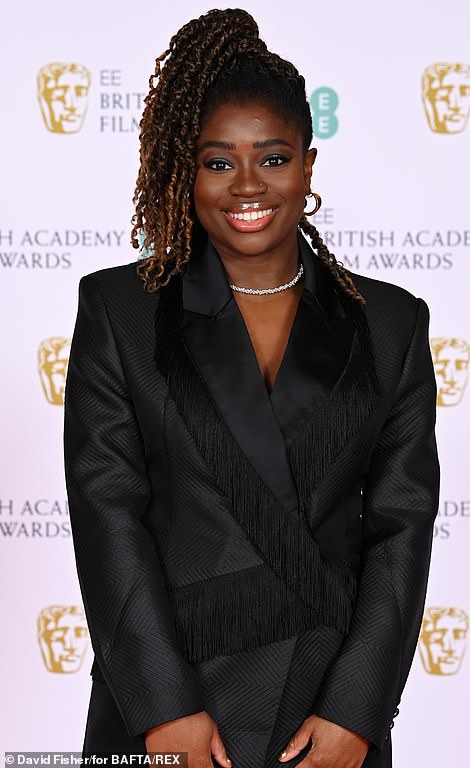 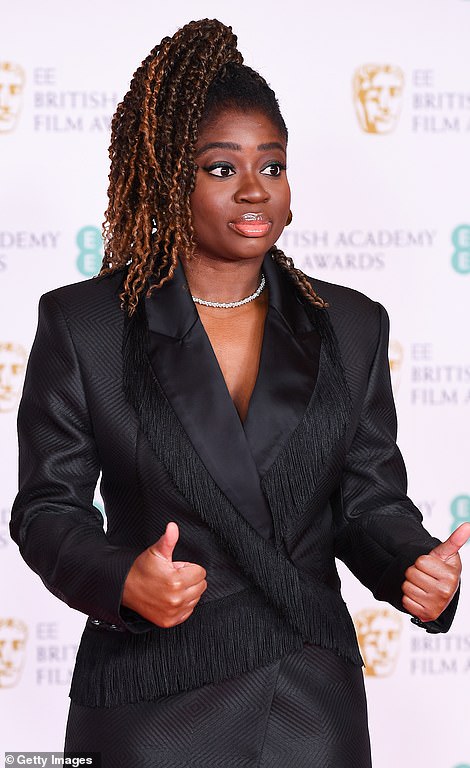 Looking good: The presenter will act as the host for EE’s online content during the ceremony 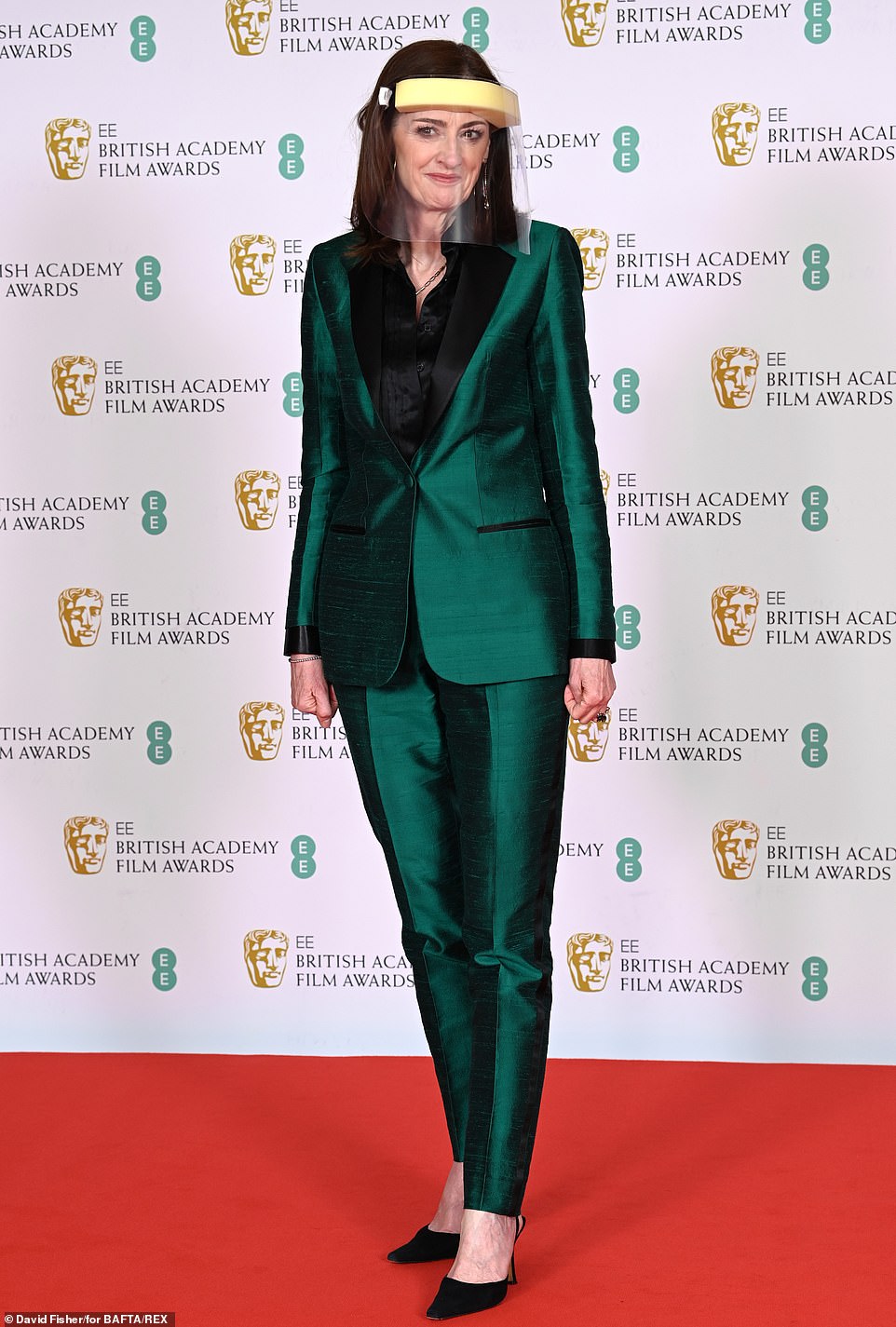 She didn’t forget her face covering! Clearly keen to ensure was adhering to the government’s coronavirus restrictions, Amanda Berry donned a face shield along with her chic green suit as she headed down the red carpet

The BAFTA and EE British Academy Film Awards 2021 is the first of the Academy’s film ceremonies to be held virtually.

The TV version of the awards show took place online during summer 2020, but last year’s film ceremony managed to go ahead a month before the Covid pandemic forced the UK into lockdown.

With the pandemic still raging, another change will take place this year: the BAFTAs will happen in two parts.

Both shows, recognising the very best in film of the past year, will be broadcast virtually from London’s Royal Albert Hall.

The first show celebrates the craft of film while the second main show will feature the mainstream awards.

Show one was hosted by Clara Amfo and eight of the 17 gongs were awarded including Best Casting, Best Visual Effects and the Outstanding Contribution to British Film, which was given to Bulletproof’s Noel Clarke.

In a moving speech he said: ‘Thirteen years ago when I won the rising star award I bounced off my chair and I popped my collar as I went up. 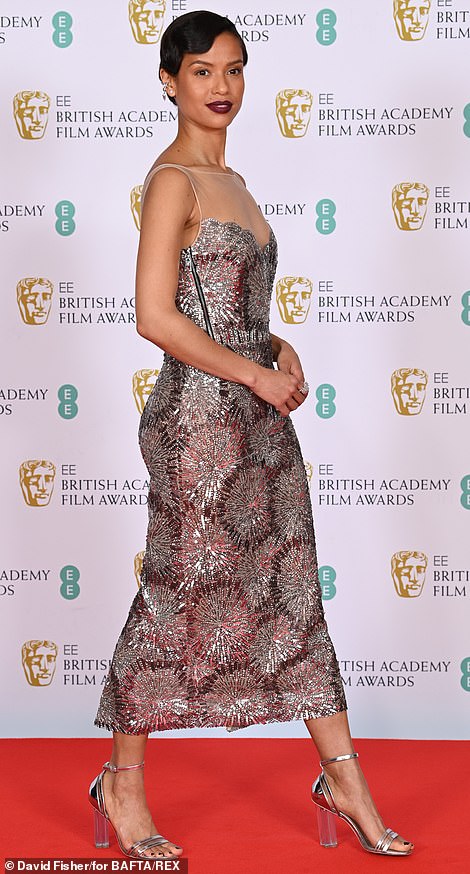 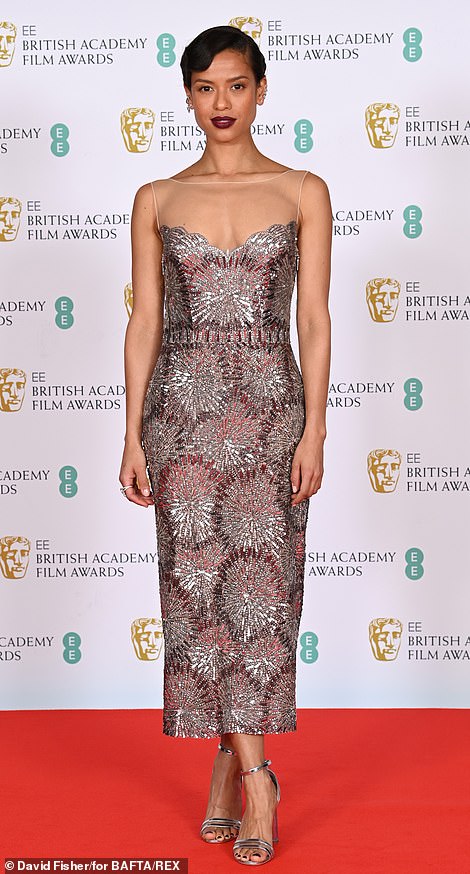 ‘For years I never really understood why I did that. I couldn’t articulate it. For years people have told me how arrogant it was, that I shouldn’t have done it, and I have always said to myself that if I ever got back on this stage again I would apologise for it.

‘I’m not going to do that. Recently I realised why I did it. I felt vindicated. I won something at the time that someone like me was never supposed to. Something that I had been told I couldn’t.’

‘I am so, so thankful for this. Years ago I ended with the words, ‘Yes we can’ and we still can. It’s just tough. So I wanted to end this one a little bit different. 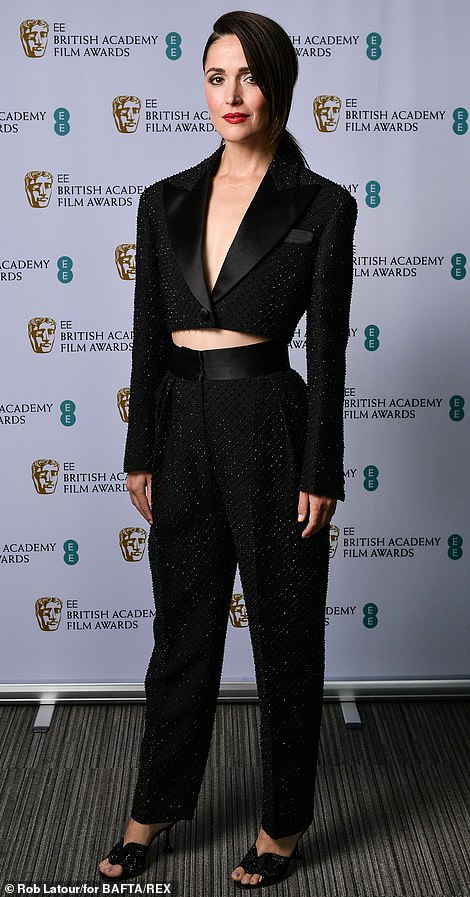 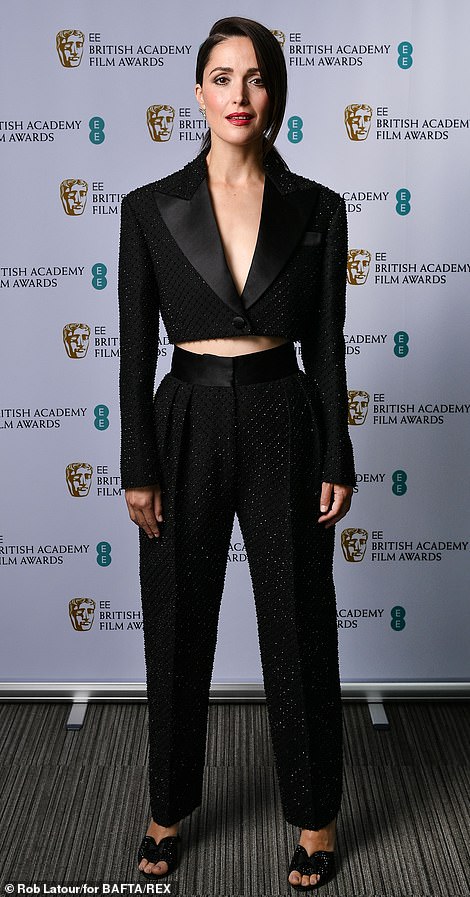 Show two is to be fronted by Dermot O’Leary and Edith Bowman from London’s Royal Albert Hall where the acting prizes will be given out. No audience will be present.

Both programmes are being broadcast in all major territories around the world and a total of 50 feature films received nominations this year.

Presenters will appear during the ceremony from both London and Los Angeles, but all nominees will accept their prizes virtually in front of a virtual audience watching from home.

Among the prizes announced on the second night will be the public-voted EE Rising Star Award and the Fellowship, BAFTA’s highest honour.

BAFTA has announced their most diverse list of nominees in the awards’ 74-year history.

In a first for BAFTA, four women have been nominated in the Director category. Three of the nominated directors are also nominated for Film Not in the English Language.

As part of BAFTA’s pledge to support fresh talent, four of the five nominated films in Outstanding Debut are also nominated across other categories, with first-time nominees accounting for four of the six nominated Directors and 21 of the 24 nominees in the performance categories.

British talent is rife in 2021, with the Outstanding British Film category increasing from six to 10 nominations, three of which are also nominated for Best Film.

Of the difficult times the awards and creative industries have had during the past 12 months – which saw a total shut-down of TV and film production across the world – BAFTA’s Chief Executive Amanda Berry said: ‘The last year has seen the Covid-19 pandemic impact everyone, and the film industry is no exception.

‘I would like to thank all those who have supported us and enabled BAFTA to continue to celebrate the very best work in film, from our members who embraced the changes we made to the voting process to the distributors for ensuring that many more films were available for online viewing.

‘Film has always held an essential place in our culture but I think we can all agree that it has been even more important during this time.

‘I very much look forward to celebrating the incredible talent of all our nominees.’

In the past year, BAFTA undertook a wide-ranging Review, signalling the beginning of a significant cultural shift within the organisation.

The changes introduced for the Film Awards are the first phase in an ongoing process of levelling the playing field for all entered films.

Krishnendu Majumdar, Chair of BAFTA, said of this: ‘This year’s nominations showcase and celebrate the remarkable range of performances and nominees behind the camera from 50 films and we’re delighted to recognise such high-quality work.

‘We are also delighted to see the strength of British film shine through in all categories.

‘After last year’s nominations, we started the BAFTA Review process with the intention of levelling the playing field and introduced​ a range of measures to ensure that all entered films were seen by our members and judged on merit.

‘We hope today you can see some of those changes reflected in the breadth and depth of those nominated and we congratulate all our nominees.’

Marc Samuelson, Chair of the BAFTA Film Committee, said: ‘It has been an extremely tough year for everyone, including for cinemas and for the film industry, so we are looking forward to some fun, and a celebration of great talent across the weekend.

‘The industry and film lovers are coming together to shine a spotlight on the creativity and craft behind the 50 nominated films, and to recognise and celebrate the efforts of the industry to keep going during this particularly challenging time.’

VANESSA KIRBY Pieces of a Woman

MADS MIKKELSEN Another Round

THE TRIAL OF THE CHICAGO 7 Stuart Besser, Marc Platt

OUTSTANDING DEBUT BY A BRITISH WRITER, DIRECTOR OR PRODUCER

FILM NOT IN THE ENGLISH LANGUAGE

ANOTHER ROUND Thomas Vinterberg

THE TRIAL OF THE CHICAGO 7 Alan Baumgarten

THE OWL AND THE PUSSYCAT Mole Hill, Laura Duncalf – WINNER

ANOTHER ROUND Tobias Lindholm, Thomas Vinterberg

THE TRIAL OF THE CHICAGO 7 Aaron Sorkin

NEWS OF THE WORLD Dariusz Wolski

THE ONE AND ONLY IVAN Santiago Colomo Martinez, Nick Davis, Greg Fisher

Algorand (ALGO) could advance even more in the ongoing bull market, but the risk remains high