Michaela Coel called for intimacy coordinators on film and TV sets to stop actors being ‘exploited’ at the British Academy Television Awards.

The actress, 33, took home the gongs for Leading Actress and Mini-series for I May Destroy You at the ceremony at the Television Centre on Sunday.

Taking to the stage to accept her award, Michaela dedicated her win to intimacy coordinator Ita O’Brien and thanked her for ‘making the space safe… so we can make work about exploitation, loss of respect, abuse of power, without being exploited or abused in the process.’ 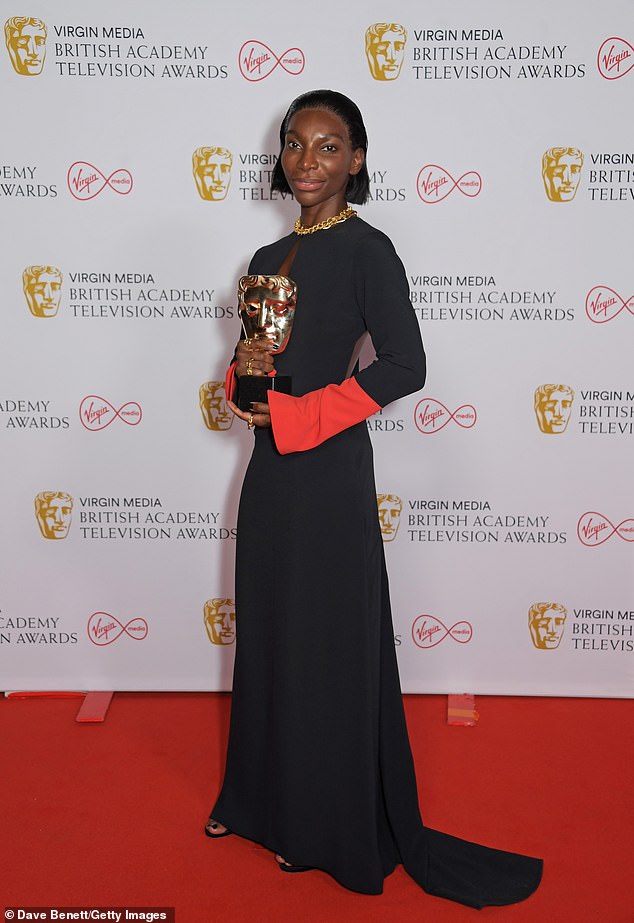 She said: ‘I know what it’s like to shoot without an intimacy coordinator, the messy embarrassing feeling for the crew the internal devastation for the actor – your direction was essential to my show, and I believe essential for every production company that wants to make work exploring themes of consent.’

Michaela’s speech comes after she offered support to the 20 women who made allegations of misconduct against actor Noel Clarke.

The actress praised the women for coming forward and offered solidarity.

Michaela, who was snubbed for her work in the critically acclaimed series at the Golden Globes this year, looked sensational as she attended the ceremony at Television Centre in White City on Sunday. 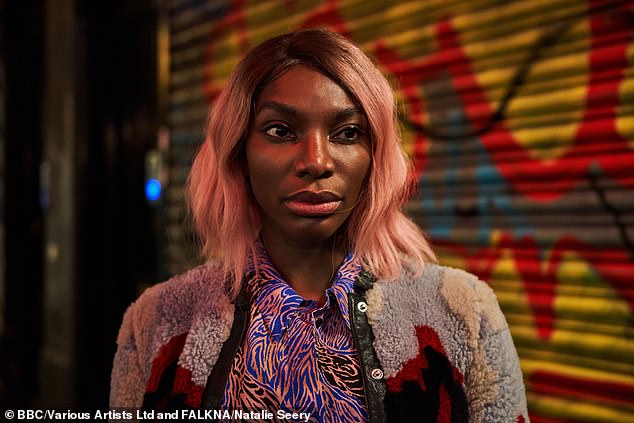 Success: The actress, 33, took home the gongs for Leading Actress and Mini-series for I May Destroy You at the ceremony at the Television Centre on Sunday

The TV star grinned from ear to ear as she posed with her Mini-Series award backstage before she then took home the Leading Actress award.

Michaela attended the star-studded ceremony in a flowing backless gown and with a statement red cuff sleeve detail.

The star cut a glamorous figure as she slicked back her raven tresses and accentuated her features with a slick of red lipstick.

She added a selection of gold accessories to her gown, including a chunky chain necklace and some statement rings.

I May Destroy You was one of last summer’s most critically-acclaimed shows around the world when it aired on BBC One and HBO.

It follows Arabella as she comes to terms with a sexual assault after her drink was spiked at a nightclub, in a storyline based on the harrowing real-life experience of Michaela. 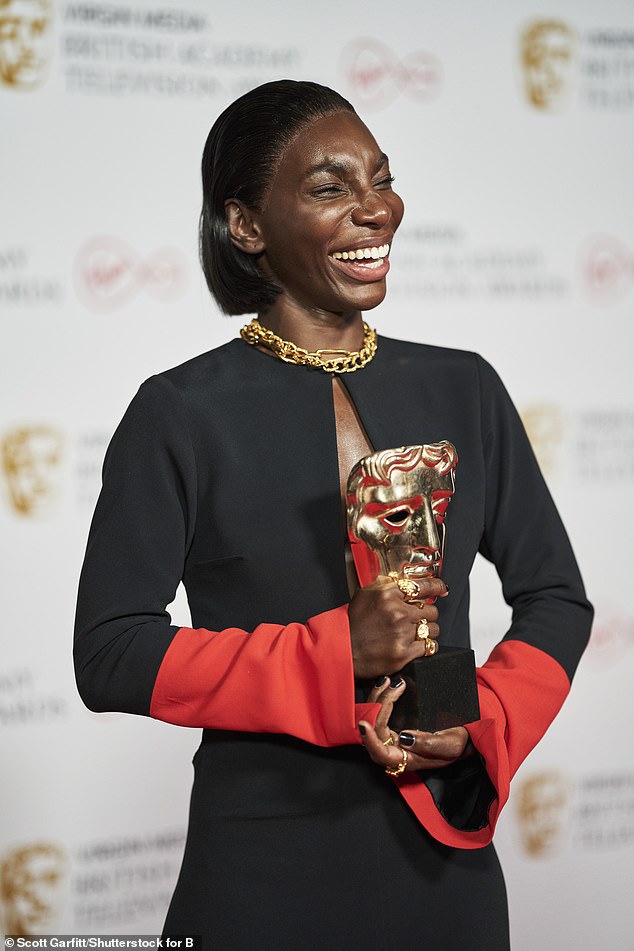 Wow: The TV star, who was also nominated in the Leading Actress category, looked sensational for the evening in a flowing backless gown and with a statement red cuff sleeve detail

Fans of the actress took to Twitter following her wins, with one writing: ‘Congrats Michaela! I May Destroy You was excellent. She’s amazing’.

Another said: ‘Brilliant! Absolutely loved I May Destroy You,’ while another added: ‘So well deserved’.

In February, fans of I May Destroy You were outraged when the hit show, and creator Coel, were snubbed by the 78th Golden Globe Awards.

The actress, who starred, wrote, directed, and produced the critically-acclaimed series, failed to get a nod in any category. 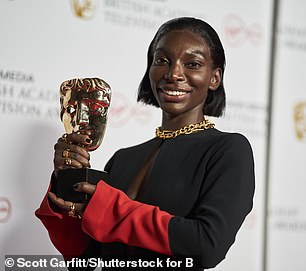 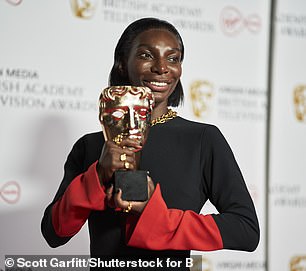 Award: Michaela grinned as she posed with her award for the series that was one of last summer’s most critically-acclaimed shows 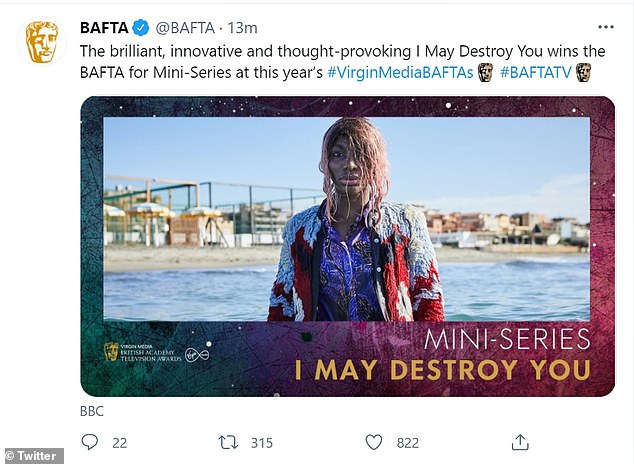 Plot: The show follows Arabella as she comes to terms with a sexual assault after her drink was spiked at a nightclub, in a storyline based on the harrowing real-life experience of Michaela

The show did lead the winners for the Royal Television Society Awards in March, however, scooping all three of its nominated categories; for Mini-Series, with creator Coel scooping both Actor (Female) and Writer- Drama. 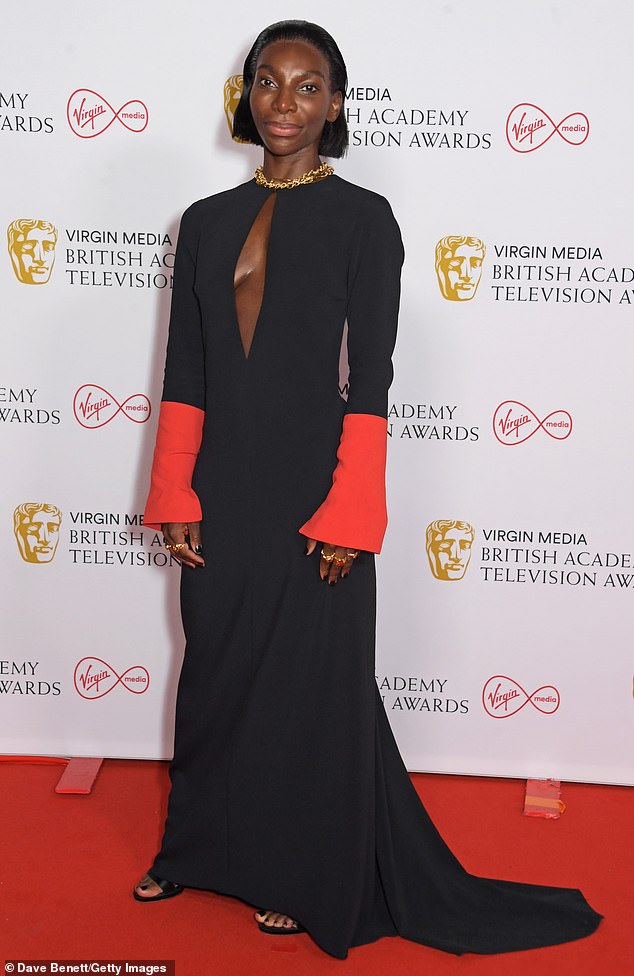 Stunning: The TV star added a selection of gold accessories to her gown, including a chunky chain necklace and some statement rings

Leading Actor award was won by first-time nominee Paul Mescal for his performance as Connor in Normal People.

Malachi Kirby, another first-time winner, won for his performance in Small Axe in the Supporting Actor category. Small Axe had led this year’s nominations with 15 nods.

And Small Axe – which features five films that tell stories about lives of West Indian immigrants in London from the 1960s to the 1980s – also picked up two Leading Actor nominations with John Boyega and Shaun Parkes both receiving nods.

Rakie Ayola also won her first BAFTA for Supporting Actress for her performance in Anthony.

Another first-time nominee, Aimee Lou Wood scooped a gong in Female Performance in a Comedy Programme for playing Aimee Gibbs in Sex Education. 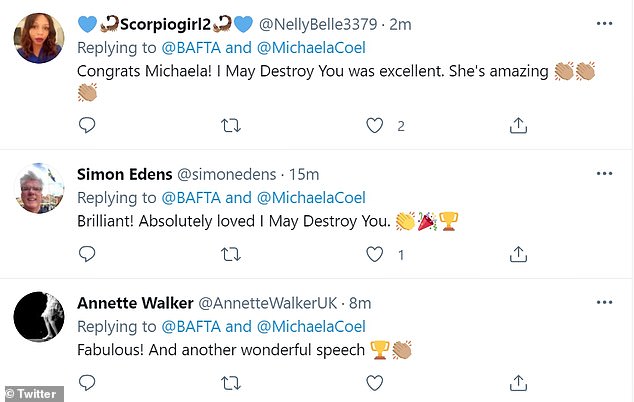 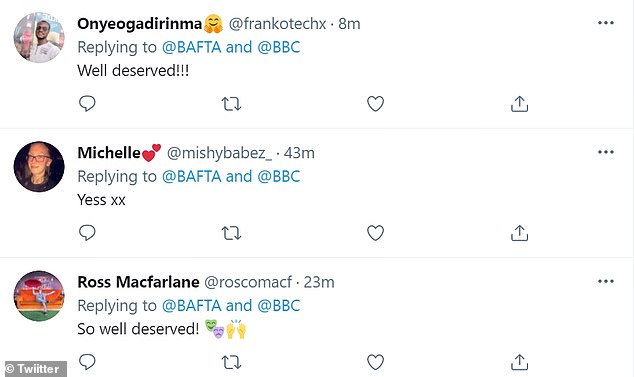 Reaction: Fans of the actress took to Twitter following her wins, with one writing: ‘Congrats Michaela! I May Destroy You was excellent. She’s amazing’

Comedian Romesh Ranganathan received the BAFTA for Entertainment Performance for The Ranganation.

Save Me Too received the BAFTA for Drama Series and Sitting in Limbo won for Single Drama. 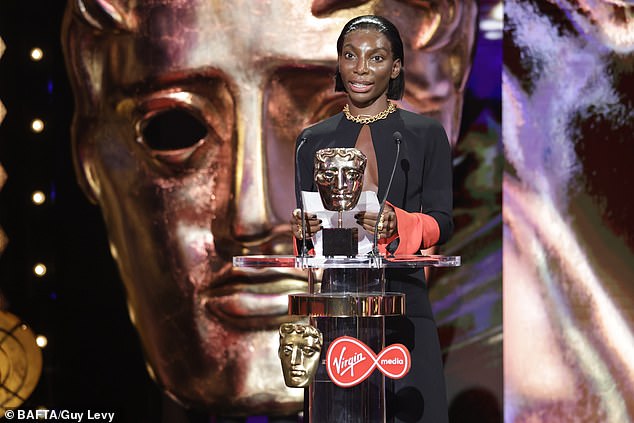 Unimpressed: In February, fans of I May Destroy You were outraged when the hit show, and creator Coel, were snubbed by the 78th Golden Globe Awards

The School That Tried to End Racism received the BAFTA for Reality & Constructed Factual. Long Lost Family: Born Without Trace won in the Features category. They Saw the Sun First won the BAFTA for Short Form Programme.

Casualty was awarded the BAFTA for Soap & Continuing Drama, its first since 2018. The Great House Giveaway won the BAFTA in the new Daytime category.

News Coverage was awarded to Sky News’ Inside Idlib, and the award for Current Affairs was presented to America’s War on Abortion (Exposure). International was awarded to Welcome to Chechnya: The Gay Purge (Storyville).

Once Upon a Time in Iraq received the BAFTA for Factual Series, Locked In: Breaking the Silence (Storyville) won Single Documentary and The Surgeon’s Cut won Specialist Factual.

England V West Indies Test Cricket triumphed in the Sport category, while the award for Live Event was presented to Springwatch 2020.

And Virgin Media’s Must-See Moment, the only award voted for by the public, was scooped by Britain’s Got Talent for the moment when Diversity performed a routine inspired by the events of 2020. 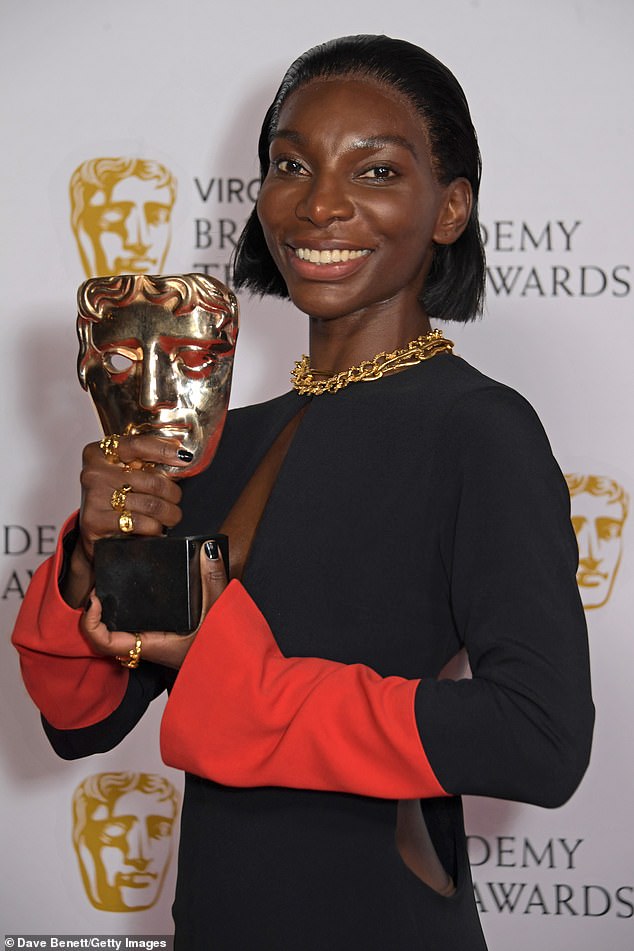 Success: Plot: The show follows Arabella as she comes to terms with a sexual assault after her drink was spiked at a nightclub, in a storyline based on the harrowing real-life experience of Michaela

Covid restrictions meant TV fans couldn’t be in attendance on the red carpet as usual and some nominees weren’t able to attend because of filming bubbles.

In an attempt to ensure everyone can access the awards, Virgin Media beamed them onto the red carpet through the latest hologram technology.

Ahead of Sunday’s ceremony, it was also reported that BAFTA TV had ‘temporarily paused’ Fellowships and Special Awards.

It comes after Noel Clarke, who has been accused by more than 20 women of sexual harassment and bullying, was suspended from BAFTA amid the allegations after he won the Outstanding British Contribution to Cinema award in April. 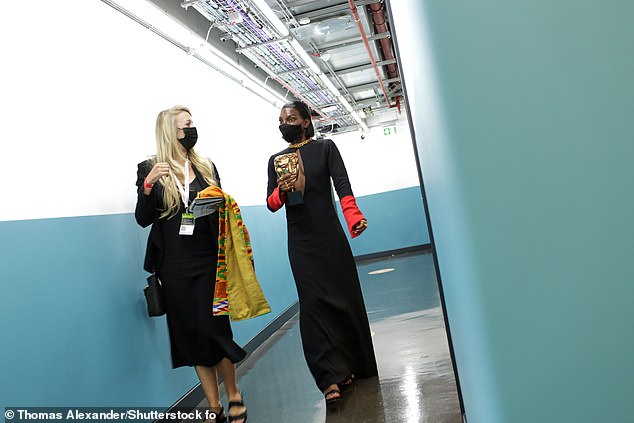 It was recently reported the British Academy of Film and Television Awards spent two weeks deciding how best to respond to allegations against Clarke, 45, prior to presenting him with one of its highest honours.

According to reports, bosses have suspended ‘all the individual honours’ which are ‘in the gift of the Academy’ ahead of the ceremony, with The Mirror stating bosses are fearing giving an award to another scandal-ridden industry figure.

The Mirror claims a message was sent to members last week which explained that BAFTA were ‘reviewing its selection protocols for its prestigious solo accolades’.

The publication reported that the message said: ‘We wanted to let you know that while we review the processes behind selecting the awards that are “in the gift of the Academy” – the Special Awards and Fellowships – we have temporarily paused these kinds of awards and they will not feature in Sunday’s ceremony.’

The Mirror claims that the only other time a TV Fellowship was ‘given and then cancelled’ was Rolf Harris. 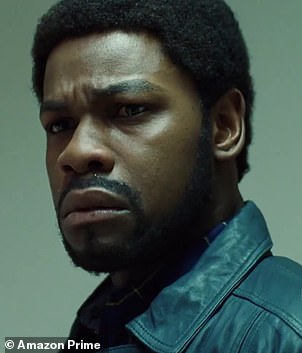 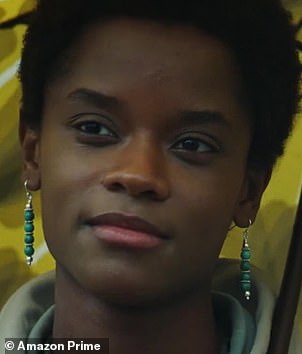 Big hit: Small Axe starring John Boyega (left) and Letitia Wright (right) led the nominations with 15 nods, with Malachi Kirby winning on the night for his performance in the Supporting Actor category

The disgraced children’s entertainer was stripped of his BAFTA Fellowship after he was convicted of 12 indecent assaults at Southwark Crown Court in June 2014, and was sentenced to six years behind bars.

Harris was released from HMP Stafford on parole in May 2017 after serving just three years of his sentence.

Over the years, a collection of people have been awarded a BAFTA Fellowship, the highest accolade the Academy can bestow, including Joan Bakewell, Kate Adie, Jon Snow, Julie Walters and Joanna Lumley. 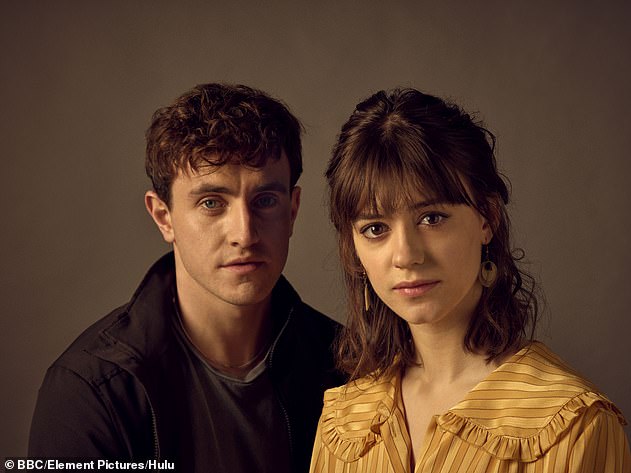 While the likes of Idris Elba, Lenny Henry and the late Cilla Black have previously won a Special Award during the ceremony.

However, the BAFTA website states that awards ‘in the gift of the Academy’ are ‘presented at the discretion of the BAFTA Television Committee; therefore they may not all be presented in any given year’.

SAVE ME TOO – WINNER

PAAPA ESSIEDU – I May Destroy You

MICHAELA COEL – I May Destroy You – WINNER

WERUCHE OPIA – I May Destroy You

FEMALE PERFORMANCE IN A COMEDY PROGRAMME

DAISY MAY COOPER – This Country

MALE PERFORMANCE IN A COMEDY PROGRAMME

REECE SHEARSMITH – Inside No.9

I MAY DESTROY YOU – WINNER

THE BATTLE FOR HONG KONG (DISPATCHES)

DAVID MITCHELL – Would I Lie to You? At Christmas

LOSING IT: OUR MENTAL HEALTH EMERGENCY

ONCE UPON A TIME IN IRAQ – WINNER

RACE ACROSS THE WORLD

THE SCHOOL THAT TRIED TO END RACISM – WINNER

DISABLED NOT DEFEATED: THE ROCK BANS WITH LEARNING DISABILITIES – DELTA 7

THEY SAW THE SUN FIRST – WINNER

AMERICAN MURDER: THE FAMILY NEXT DOOR

VIRGIN MEDIA’S MUST-SEE MOMENT (voted for by the public)

"Making sure Georgia's voter rolls are up to date is key to ensuring the integrity of...