Bank Holiday heatwave! ‘Monsoon May’ is set to be replaced by 73F heat within days


A band of rain is set to continue the May ‘monsoon’ across the UK this week as a sunny Spring Bank Holiday Monday leading into a scorching two-week heatwave is promised for the following week.

From a week Monday, May 31, Britons can finally expect some respite from the heavy downpours and gale-force winds – but until then the damp and blustery weather is largely expected to continue.

Central, northern and western parts of the UK are predicted to see heavy rain well into the middle of the week, with thunder expected in parts of southern Wales and southern England along with downpours tomorrow – and highs of 12C (53F) in London.

Rain showers and cold temperatures are also expected to continue into the coming week in the north and midlands, as temperatures are predicted to remain well below average for the time of year at a low of 6C (42F) in cities including Manchester, Newcastle and Edinburgh.

The rain will eventually slow by Wednesday in Cardiff and southern Wales, with the rest of the UK predicted to dry up on Thursday as the rain eases off, making way for slightly brighter weather and warmer temperatures – with highs of 19C (66F) in London.

A heatwave bringing a possible string of 22C (73F) days could follow after the Spring Bank Holiday weekend if Southerly winds bring sub-tropical Atlantic air – as the Met Office predicts ‘much drier’ weather for June. 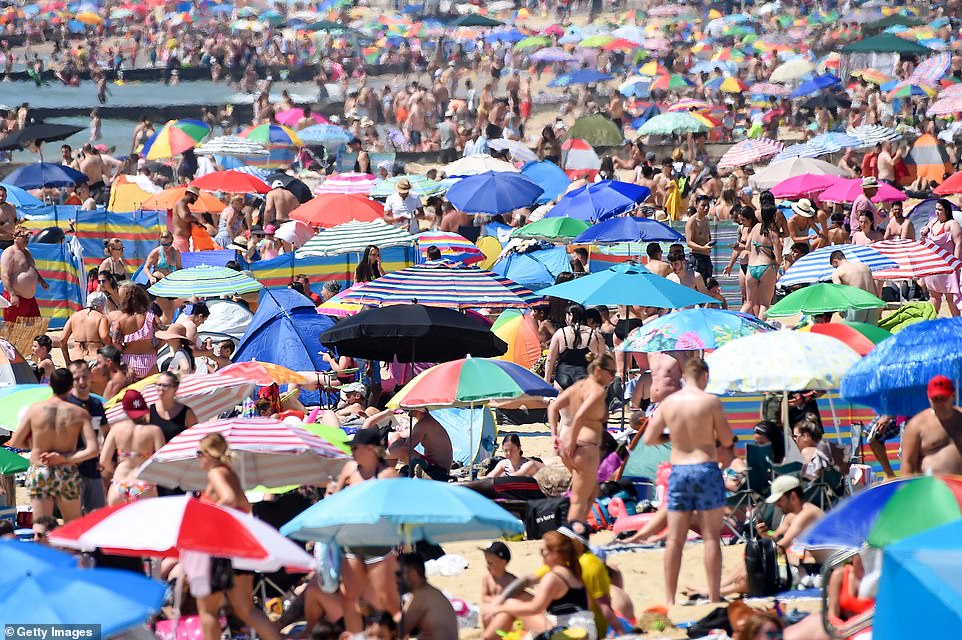 She added: ‘We’re pointing towards seeing things settling down from the middle of next week onwards, particularly in the south.

‘There is a good deal of uncertainty in the forecast, but we’re hoping by the end of May we will have much drier and settled weather across the UK.’

She said the long-term forecast suggests June will be much drier than May.

‘The most likely scenario at the moment is looking like predominantly dry weather, at quite a contrast to what we’ve seen with the wet weather in May, so that would be an improvement,’ she added.

Domestic holiday hotspots in the South West have been deluged by downpours amid one of their rainiest Mays on record. 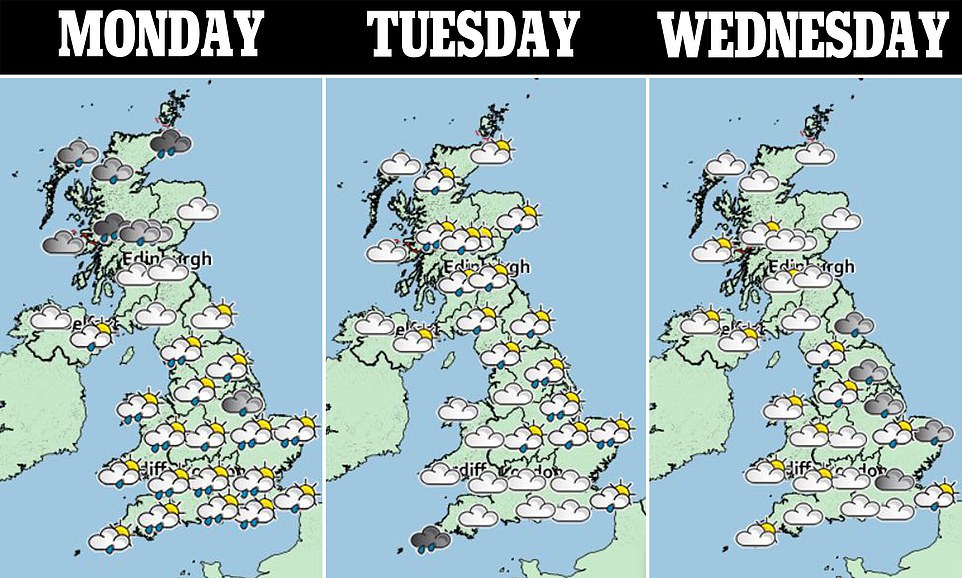 Weather forecast: Tomorrow, Monday May 23, will see rain across most of the UK with thunder expected in south west England and southern Wales. Tuesday will see slightly warmer temperatures in the south east but further rain for most of central and northern UK. Wednesday will see rain begin to east in Wales and the west coast of England, but storms in the east 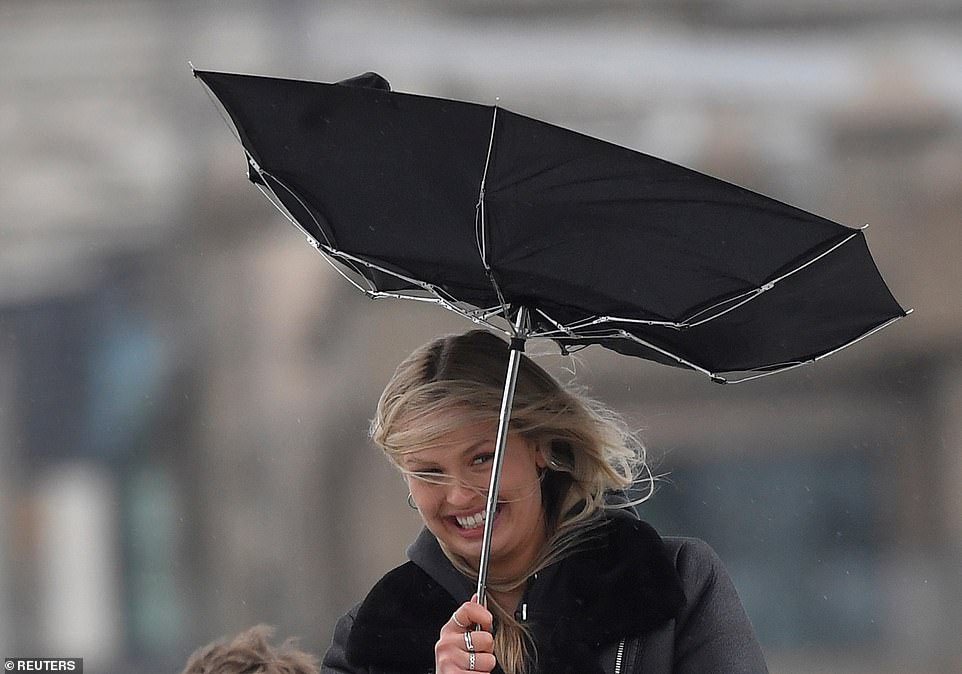 A wet and windy weekend has seen many battle with a brolly. Here a woman shields herself from rain during winds in London 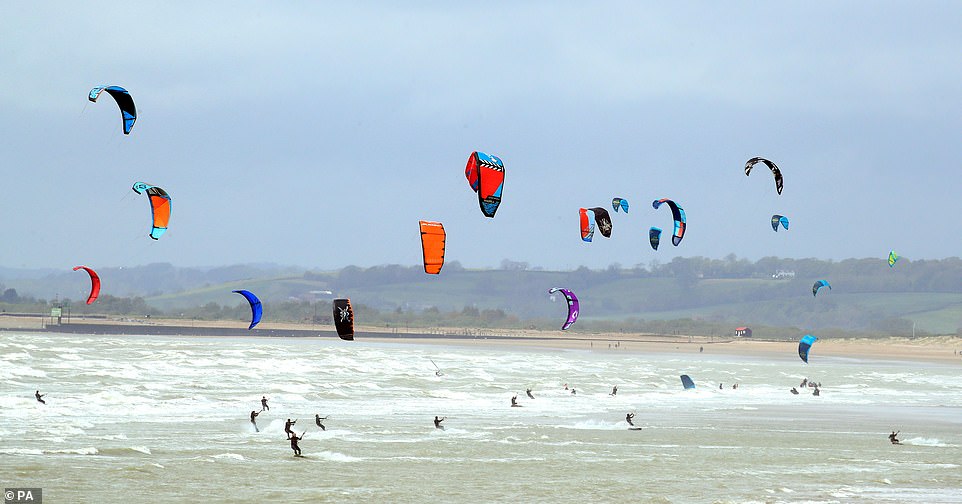 Kite surfers enjoy with windy conditions in Camber, East Sussex. Sunday, May 23. As rain covers most of the UK 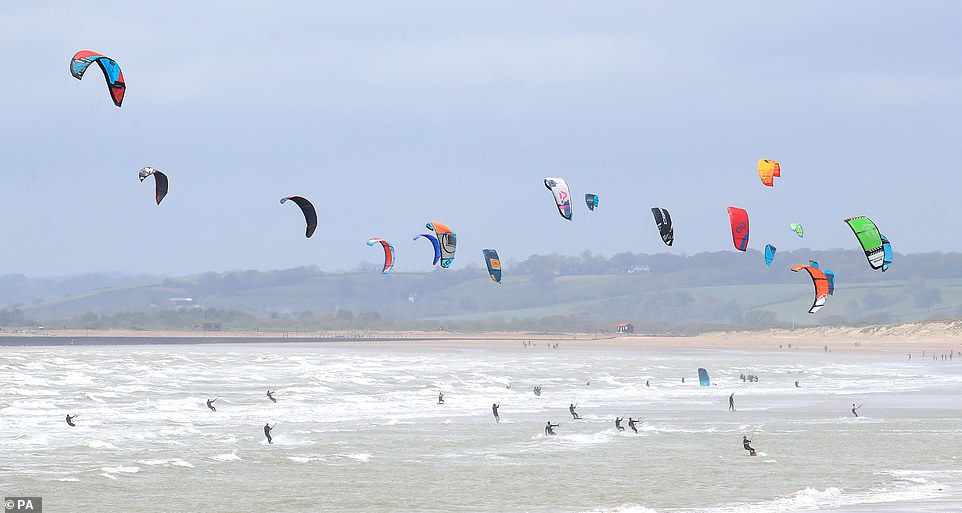 While people in the UK have been encouraged to holiday at home amid international travel restrictions, popular retreats in Devon and Wales have been ravaged by potentially record-breaking levels of rain.

This comes amid a particularly wet spring for the UK as a whole, the Met Office has said. Wales has seen almost double the average levels of rainfall for the entire month so far.

The nation has been hammered with 170mm of rainfall so far, making this month already Wales’ fourth dampest May on record.

On average, the nation normally sees 86mm of rain in May, with the record being 184.2mm.

This makes it the eighth wettest May for the south-west pocket of the UK, against a record of 190.3mm. 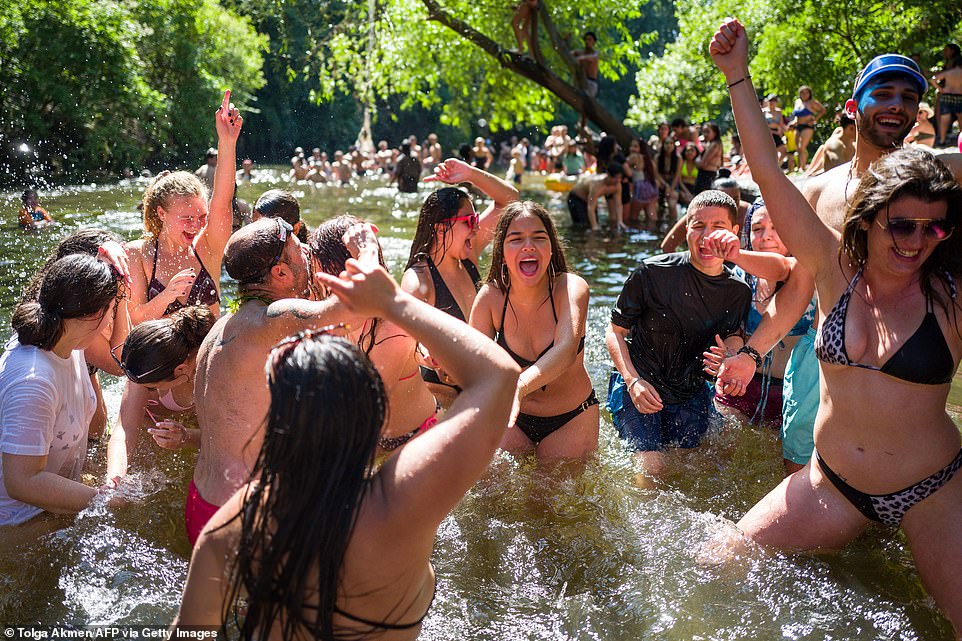 Last year: Sun-seekers cool off in the water and sunbathe on the riverbank at Hackney Marshes in east London on June 24, 2020 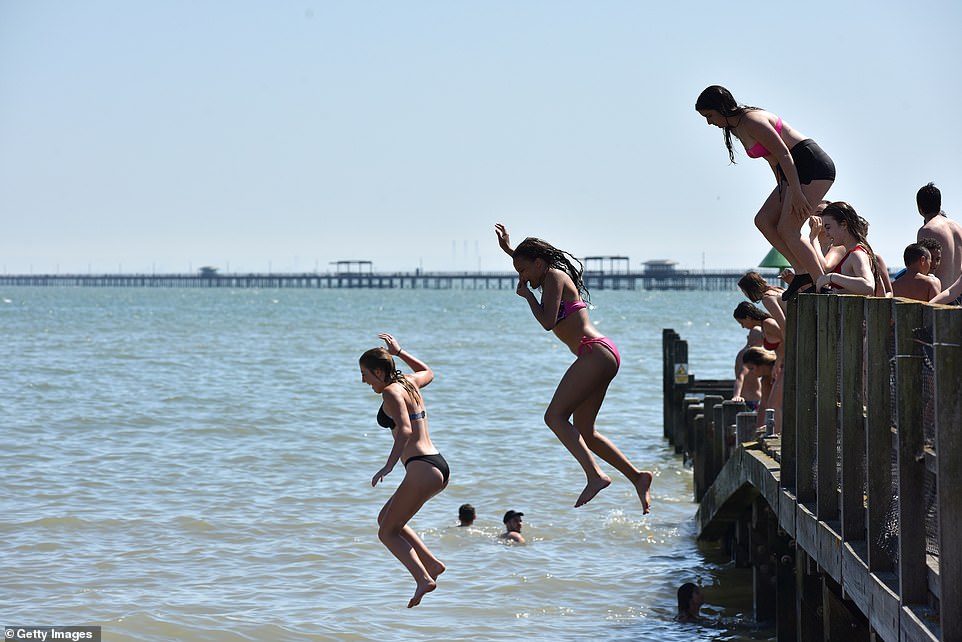 Last year: Girls jump from a jetty into the sea as crowds of people gather on the beach on June 25, 2020 in Southend-on-Sea, Essex

Met Office’s Ms Shuttleworth said the UK as a whole has seen 131 per cent of the usual month’s rainfall already.

Ms Shuttleworth said: ‘We have seen a lot of rain in Devon and Wales over the past week.

‘They have seen well above those average in those sorts of regions.

She added: ‘If this drier weather does come in, it looks like it will scupper any rainfall carrying on and accumulating as it has at this point in the month.’

Lifeguards have urged dogwalkers to take care when walking near cliffs, including keeping their pets on a lead and bringing fully-charged phones with them.

The Royal National Lifeboat Institution has recommended that anyone who does enter the sea checks tide times daily and ensures any equipment and lifejackets are in full working order beforehand.

A Kraft Heinz Company and Van Leeuwen Ice Cream partnership resulted in the limited-edition mac and...