A Banksy mural which appeared overnight on the side of a house on England’s steepest road just before it was sold was today removed.

The piece, entitled ‘Aachoo!’, was first discovered on the external wall of the semi-detached property on Vale Street in Totterdown, Bristol, last December.

The image depicted an elderly woman sneezing and created the illusion that the force of the pensioner’s sneeze had knocked over houses built above it.

Today crowds of onlookers nervously watched on as workers began the delicate and arduous task of removing the piece from the property by crane after it appeared to have been sold. 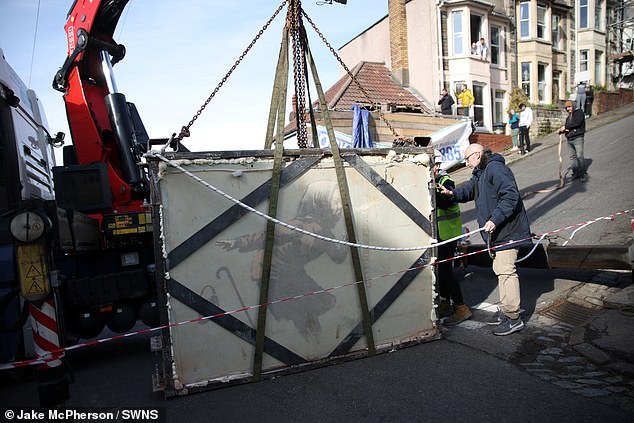 Workers remove the Banksy mural from the external wall of the semi-detached property on Vale Street in Totterdown, Bristol 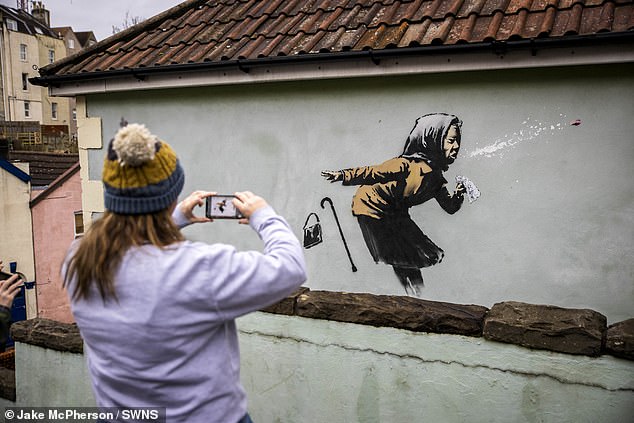 The image, entitled ‘Aachoo!’, depicted an elderly woman sneezing and created the illusion that the force of her sneeze had knocked over the houses 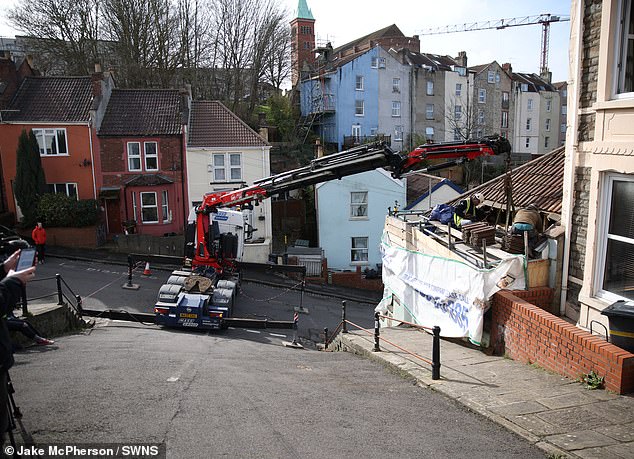 Local reports say one of the people helping move the Banksy was Federico Borgogni – a restorer from Italy.

He is a specialist at removing frescos and had previously help move one from nearby Fishponds.

Mr Borgogni, who was present at the Banksy today, confirmed he was involved in the restoration, but refused to divulge any more information.

The task of removing the Banksy today was in the hands of Mass Developments UK Limited.

Owner Mark Steventon-Smith said it had been a tough job, but would not shed any light on the owners, sale, or potential destination of the ‘Aachoo’ Banksy.

Speaking after the high-value wall was grounded, he said: ‘I really can’t say anything, and I can’t say where it’s going either.

‘But I’m so happy to finally see it on the ground. We were told to be very careful, but the owner has insured the Banksy.’

Another neighbour refused to comment, except to say the whole process left her feeling ‘irate.’

The ‘Aachoo!’ artwork caused a stir last year when it appeared on the external wall of the £300,000 property which was due to be sold. 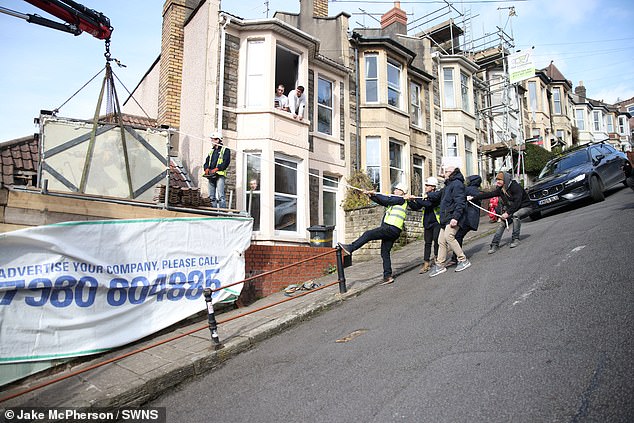 A man who claimed to be a family friend of the house’s previous owners said they had turned down an offer for the piece  for £2.5 million 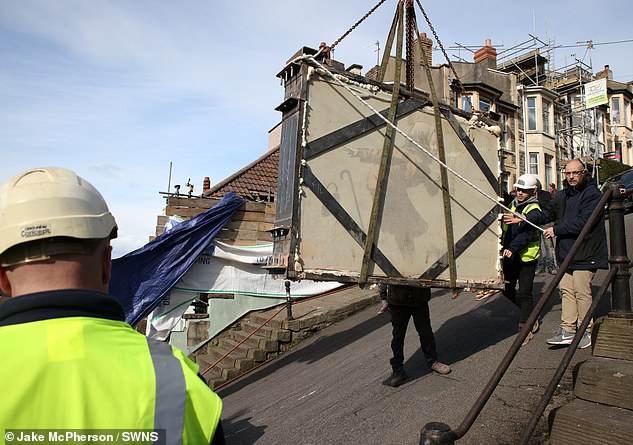 Despite the Banksy being valued at £5million, rumours that the owner had pulled out of the sale were quickly quashed.

Nick Makin – whose mother Aileen Makin had previously owned the home when the street art appeared overnight – had denied claims the family had decided against exchanging contracts.

The family had said they wanted the artwork to stay in place and be protected, insisting the sale was merely put ‘on hold for 48 hours.’

Mr Makin admitted the family had to ‘take a moment to think about it’ after the valuation was revealed, and that his mother had been left distressed by the attention.

However it later appeared that a new family had moved into the property and the artwork was later covered with a scaffolding board. 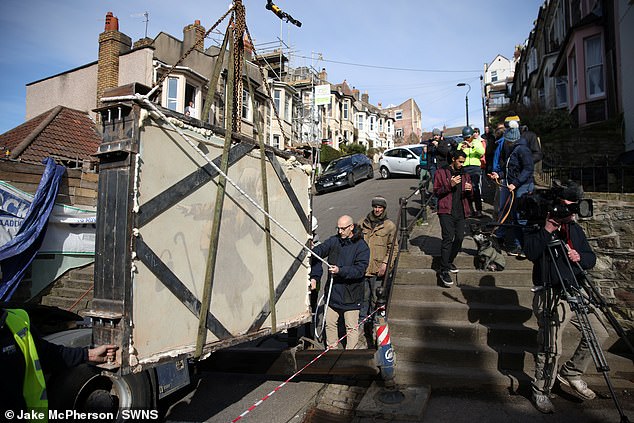 It is unknown who the buyer of the artwork is.

The scenes come after Banksy took to social media this month to claim responsibility for a mural which appeared overnight on the walls of a Victorian jail where Oscar Wilde was famously held.

The painting, which depicts a prisoner attempting to escape over the wall with a typewriter in his hand, was etched onto the side of HMP Reading.

The prison is renowned as the location where Irish poet Oscar Wilde was incarcerated from 1895-1897 for committing ‘gross indecency’ and went on to inspire his final published work ‘The Ballad of Reading Gaol’.

Before the piece was confirmed as belonging to Banksy, it was welcomed by Labour’s Reading East MP Matt Rodda who said it highlighted the ‘national and international importance of this unique historic building’.

Just months earlier, a mural of a little girl hula hooping with what appeared to be a bicycle tyre was painted on a brick wall on the side of a beauty parlour in Lenton, Nottingham. 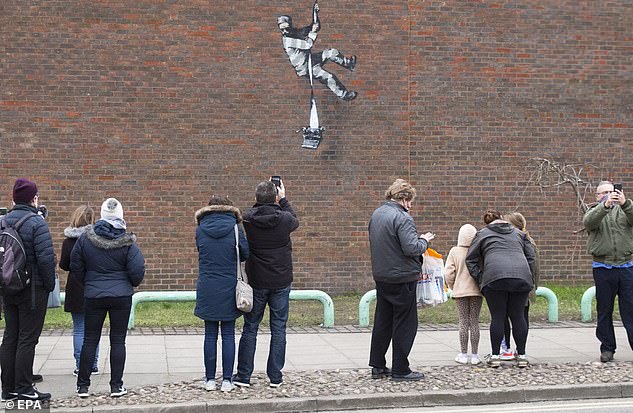 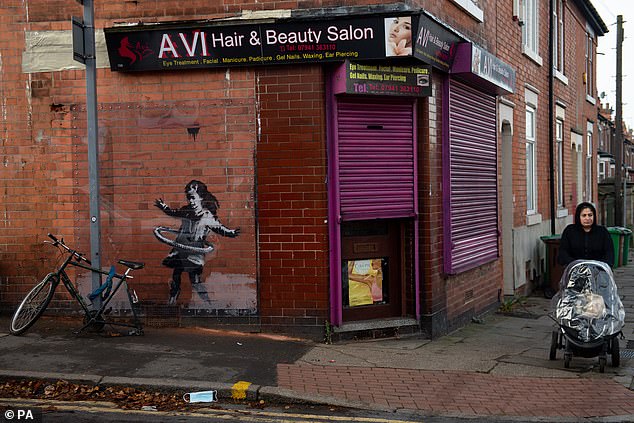 Last year a mural of a little girl hula hooping with what appeared to be a bicycle tyre was painted by Banksy on a brick wall in Lenton, Nottingham

Meanwhile in July last year, Banksy’s artwork inside a London Underground train carriage, with messages about the spread of coronavirus, was removed by Transport for London (TfL).

The artist uploaded a 59-second video captioned: ‘If you don’t mask – you don’t get’ to his Instagram and YouTube pages.

It showed Banksy spray painting stencils of his famous rats inside a Circle Line train.

The anonymous street artist, who made his name with his trademark stencil-style ‘guerrilla’ art in public spaces, including on walls in London, Brighton, Bristol and on the West Bank barrier separating Israel and Palestine, is known to create his masterpieces under the cover of darkness.

He will often confirm he is the creator of a piece of artwork by posting images of them on Instagram or on his website.

Establishing himself as the world’s most elusive artist, the ‘graffiti guerrilla’, who began his street art 25 years ago, has seen his works coveted by collectors and celebrities including the Hollywood stars Brad Pitt and Angelina Jolie.

Wow. It Only Takes 3 Minutes To Get Started With TurboXBT Short-Term Contracts! 2021