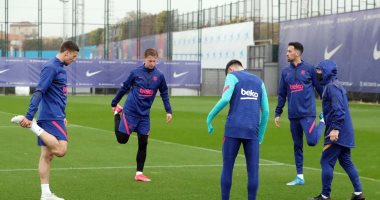 The Spanish club Barcelona continues its preparations to face Granada, tomorrow, Monday, at the Camp Nou, in the fifth round of the Spanish League, and the club’s official page published a video clip of the team’s training today..

The Catalan newspaper, Mundo Deportivo, reported that Barca trained today at the Juan Gamper stadium to put the final touches on the Granada match..

Dutch coach Ronald Koeman led the team’s training in which Ansu Fati participated, and he continues his recovery steps, and is scheduled to return to participate in the matches starting from the Levante meeting on September 26 in the seventh round of the Spanish Football League..


Fati was excluded from meeting Granada in the fifth round, as well as from facing Cadiz on Thursday in the sixth round, until he regains full fitness after recovering from his long knee injury, and Koeman seeks to push him against Benfica in the Champions League; The match that will be held in Lisbon to compensate for the defeat against Bayern Munich in the first round of the group stage.