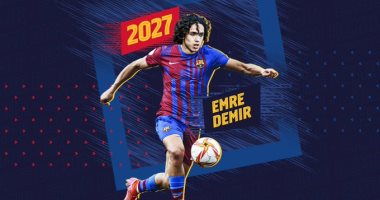 The Spanish club Barcelona announced that it had reached an agreement with its Turkish counterpart, Kayserispor, to include the young talent Emre Demir, 5 years, as he will join Barca after the end of the current season from Kaysorespor, and the player will sign a contract until June 2027..

According to the statement published by Barcelona on its official website, the deal will cost Barcelona’s treasuries an amount of money worth more than 2 million euros to include 17-year-old Demir, and a penalty clause in his contract worth 400 million euros.

Barcelona and Kaysorespor agreed to keep Demir in his ranks until June 2022, then he will join the youth team from the following season..

Born in 2004 in Mersin, Turkey, Demir is a left-footed attacking midfielder with great technical skills.

Demir represents the Turkey U-16 national team at the moment since 2018, and has participated in 14 matches so far, while he has worn the Kayserispor shirt in 26 matches and scored a goal since his promotion to the first team in 2019.

This evening, Thursday, Barcelona will visit Cadiz at the “Ramon de Carranza” stadium, in the sixth round of the Spanish League competition, at ten in the evening today.