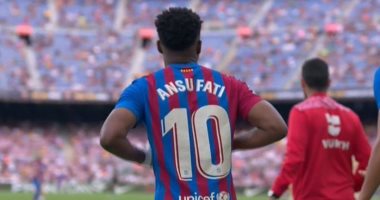 Young star Ansu Fati, the Spanish player of Barcelona, ​​​​returned to participate again with the Catalan team after a long absence of injury, during the confrontation with Levante, which is currently being held at the Camp Nou stadium, the stronghold of the Catalan team, in the seventh round of the Spanish League competition “La Liga”. For the current season 2021-2022.

Fati participated as a substitute for Dutch striker Luke de Jong, to appear in the No. 10 shirt with Barcelona, ​​​​for the first time since the departure of Argentine star Lionel Messi to Paris Saint-Germain during the last summer transfer period.

And Barcelona, ​​the Spanish club, gave the talent Ansu Fati the shirt of Argentine star Lionel Messi, after his departure from the Blaugrana, which ended in the summer, and joining Paris Saint-Germain.

“Our new player No. 10 is made in La Masia,” Barcelona commented after giving Ansu Fati the Messi shirt.

Messi’s No. 10 shirt has been vacant throughout the recent period, after Argentine Lionel Messi left Barcelona to join Paris Saint-Germain.