Australia’s most feared inmate Bassam Hamzy was upset and distressed at his cousin’s brazen assassination on the streets of Sydney, according to his lawyer.

One of the few people permitted to speak with the Brothers 4 Life founder in jail, solicitor Mohammad Khan, has revealed Hamzy’s distraught reaction to last week’s slaying of relative Bilal Hamze.

Bilal, 34, was gunned down outside Japanese eatery Kid Kyoto, on Bridge St, about 10.25pm on Thursday evening after dining on kingfish with a date described as a Kim Kardashian lookalike.

Police sources believe Bilal, himself a crime boss, had a price on his head amid an underworld conflict between associates of the Hamzy and Alamaddine clans.

The day after the shooting, Bilal’s notorious relative Bassam held a conference from Supermax, New South Wales’s most secure prison, with his solicitor Mr Khan.

The notorious gangster somehow already knew what had happened. 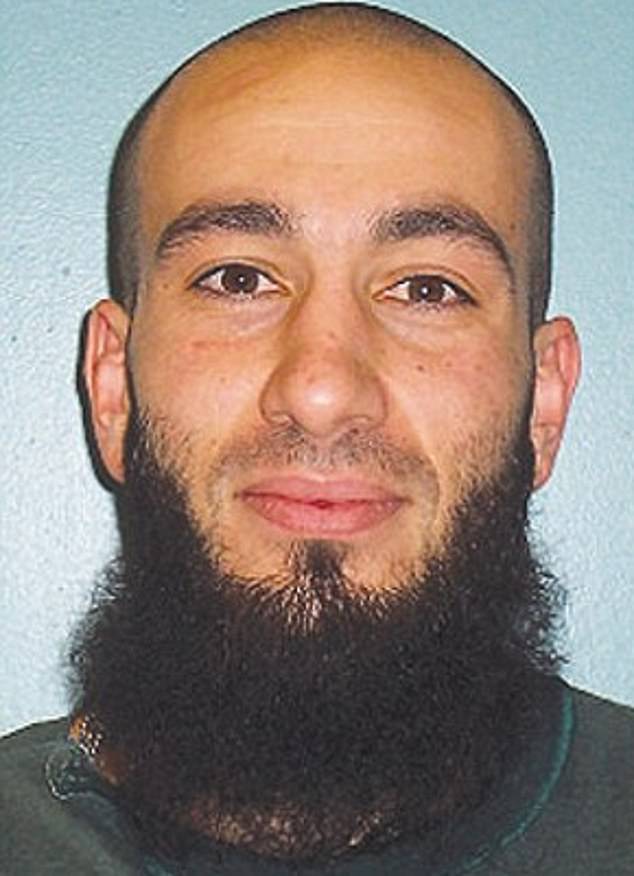 Bassam Hamzy (pictured) is one of NSW’s most notorious prisoners having been convicted of murder, drug and gang offences. He was ‘upset and distressed’ at the news of Bilal’s death

‘He was naturally upset and distressed that his cousin was killed earlier and the circumstances of the killing being in the CBD,’ Mr Khan told Daily Mail Australia.

Hamzy, 41, learned of the death on Friday morning prior to his meeting, but did not say how.

Hamzy is serving a 40 year jail term over murder and gang-related offences, after first being locked up in 1998 over the killing of a Sydney teenager.

He founded the Brothers 4 Life street gang in his cell after converting to radical Islam. At one point he infamously made up to 450 calls a day from a secret mobile phone until he was sprung by prison authorities.

Bilal Hamze is his third close relative to die in the past 12 months. His younger brother Mejid was gunned down at his Condell Park home last October and his father Khaled died of illness in August.

He is due to be laid to rest on Thursday following prayers at the Lakemba Mosque, with police expecting to keep a close eye on proceedings.

But Daily Mail Australia can reveal that Bilal’s death has led to unexpected complications for the Hamze family. 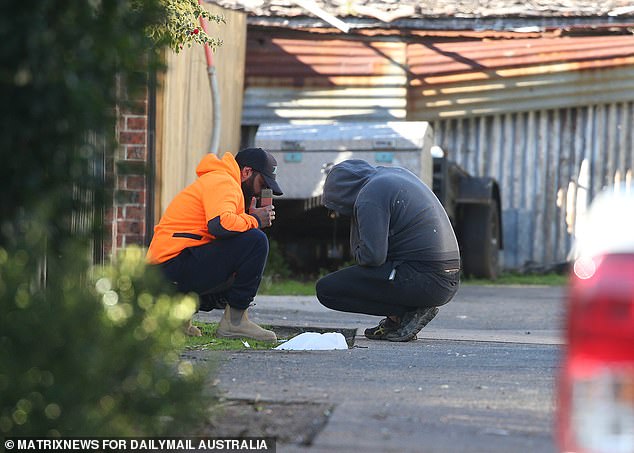 About 20 associates of Bilal Hamze descended upon his mother Maha’s home in Auburn (pictured), in the city’s west, on Friday, to mourn their friend 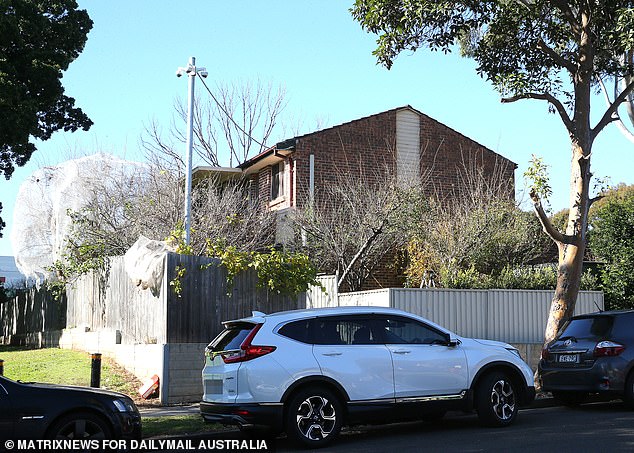 Hi-tech fortifications at the Hamze matriarch Maha’s housing commission townhouse in Auburn caught the attention of NSW authorities this week.

A private telegraph pole with three CCTV cameras has been installed out the front of the matriach’s home.

In a statement, the NSW Housing and Land Corporation told Daily Mail Australia the prominent CCTV pole was unauthorised and hadn’t been installed by the agency. The devices likewise weren’t installed by NSW Police.

A state government spokesman said housing authorities will probe whether the pole and cameras should be ripped out of the ground. 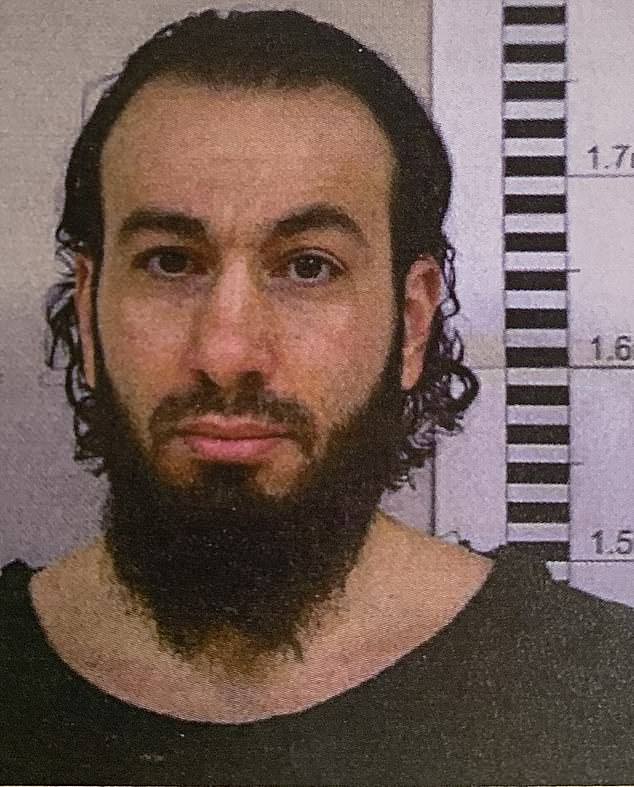 Hamzy (pictured) is serving a 40 year jail term over murder and gang-related offences, after first being locked up in 1998 over the killing of a Sydney teenager. 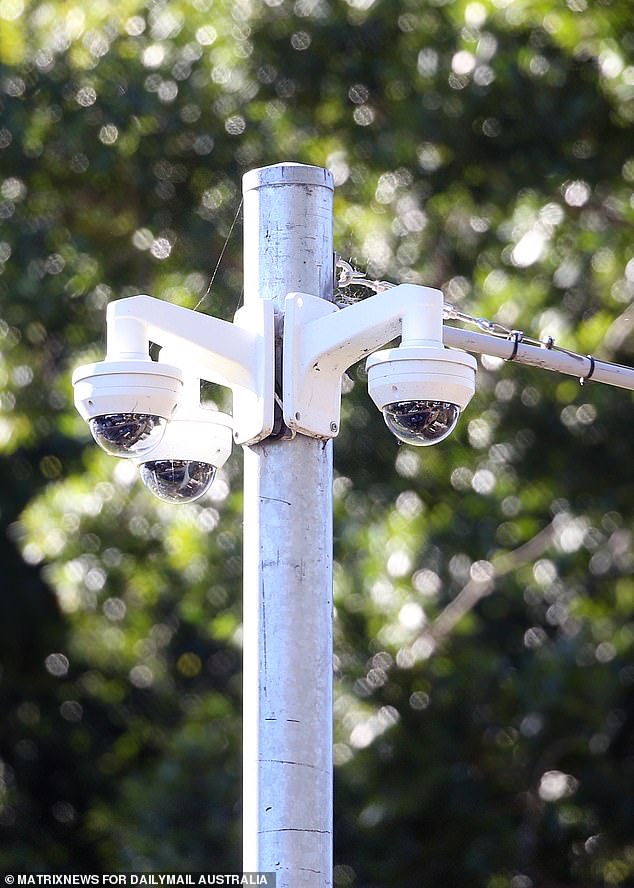 ‘Land and Housing Corporation will work with the Department of Communities and Justice and the tenants to determine whether the pole and cameras need to be removed,’ the government spokesman said.

The townhouse has twice been the target of drive-by shootings.

Shots were fired at the home in February, shattering a window at the adjacent Auburn hospital and injuring a nurse.

Mrs Hamze was shot eight times in her right leg in another drive-by shooting at the premises in 2013.

That shooting was related to a debt recovery feud between her son and another man, and Mrs Hamze was collateral damage. She survived. 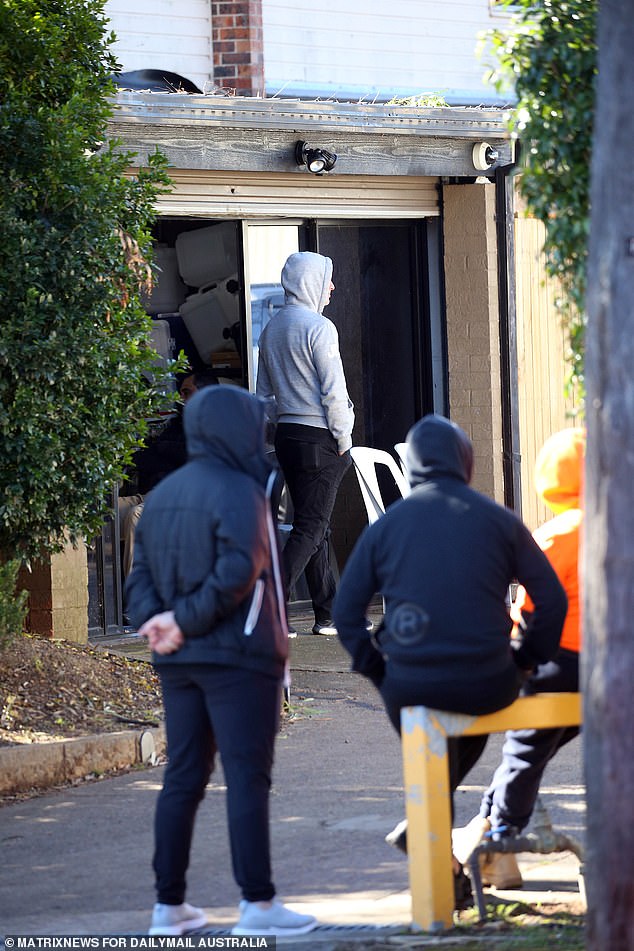 Some 22 associates of the Hamzy and Alameddine families have been hit with court orders restricting their movements and freedoms by police, out of concerns regarding gang conflict.

A lawyer for Bassam Hamzy’s brother Ghassan Amoun will fight to have one such serious crime prevention order relaxed in the Supreme Court on Tuesday morning, ahead of Hamze’s funeral.

‘I’ll be making some submissions to try and relax those conditions in terms of communicating during the funeral and mourning period,’ Ahmed Dib told Daily Mail Australia.

Mr Dib previously told Seven News that it was a time ‘when you need family members around you’.

But 2GB breakfast host Ben Fordham took a hard line against the move on Monday. ‘There’s no way in the world an exemption should be allowed,’ he said.

Regardless of what happens with his relatives, Bassam Hamzy will have to mourn his relative in private, in the comfort of his cell.

Bilal Hamze’s last meal: How crime boss ignored cops warning and entertained his ‘Kim Kardashian-lookalike date’ with wagyu beef and kingfish sashimi at a trendy Japanese restaurant – before being executed in the street in brazen gangland hit

Bilal Hamze and his glamorous ‘Kim Kardashian-type’ date splurged over $200 on kingfish sashimi and wagyu beef at a trendy Japanese restaurant  just moments before he was assassinated on the street in a gangland hit.

Hamze, the cousin of notorious Brothers 4 Life gang leader Bassam Hamzy, was gunned down in a brazen drive-by shooting on Bridge Street, near Circular Quay, at about 10.25pm last Thursday. 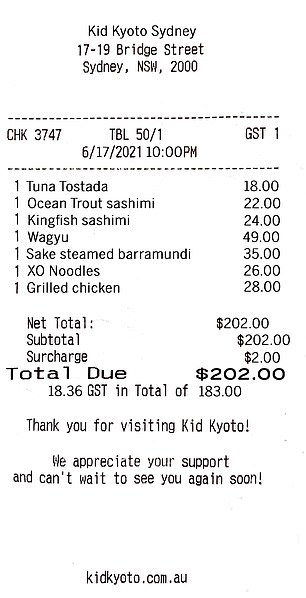 Sources at the popular Kid Kyoto restaurant told Daily Mail Australia Hamze stood out because of the tight white pants he was wearing and the attractive woman by his side for the lavish dinner.

The pair, who were the last customers to leave the restaurant, enjoyed tuna, trout and kingfish sashimi for their entree and then gorged on wagyu beef, barramundi, shitake noodles and sake chicken for their main.

Hamze, who had a bounty on his head and a distinctive tear-shaped tattoo under his right eye, was strolling down a busy lane when a black stolen Audi with two armed hitmen inside drove past and fired up to ten bullets at him.

An emergency services source told Daily Mail Australia that Hamze was shot twice in the stomach and once in the shoulder.

Paramedics desperately tried to keep Hamze’s organs from falling out in the aftermath of the shooting but he went into cardiac arrest in the ambulance and was unable to be revived at St Vincent’s Hospital.

Police later found the burnt-out wreckage of an Audi RS3, believed to be the getaway car, on a quiet street 17 minutes away in Northwood on the Lower North Shore.

Bilal was hiding out in the city amid underworld conflict with members of the rival Alameddine clan. But his ostentatious display at dinner suggests he thought he was safe away from his nearby hideout in Pyrmont. 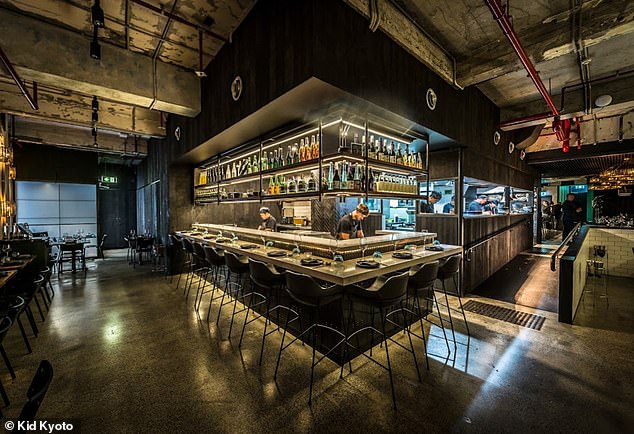 Crime boss Bilal Hamze enjoyed a fine dining experience at Kid Kyoto (pictured) on Thursday night with a glamorous mystery woman. He was executed just moments away after leaving the trendy Japanese restaurant

Associates of the slain crime boss formed a guard of honour at his grieving mother’s high security housing commission townhouse on Friday morning.

Two dozen male friends, most of them dressed in hoodies and tracksuit pants, gathered to pay their respects and stand protectively out the front of matriarch Maha Hamze’s home in Auburn, Sydney.

His mother’s humble home was itself a scene of recent bloodshed – and is fitted with security technology more befitting a prime minister’s residence.

The publicly-owned property is protected by at least six CCTV cameras including a private telegraph pole where three devices capture a 360 degree view of the street.

Groups of men lurked near the entrance to the matriarch’s home and in a nearby park, occasionally comforting one another. 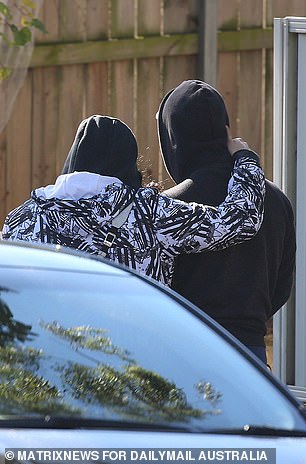 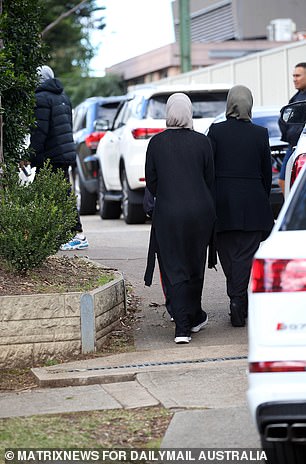 Police sources have claimed Bilal was hiding out in the city amid underworld conflict with members of the rival Alameddine clan. Pictured: Friends and family descended on the Auburn home of the mother of Bilal Hamze

Police cars drove by at least once an hour and as the day went on a queue of Toyota Hiluxes and Audis formed in the driveway.

At one point, a young man arrived, desperately hiding his face from the TV cameras under a fluoro hoodie – and left moments later by jumping the fence and scurrying off into a park.

Most retreated inside a converted garage with blacked out windows when television cameras swooped.

There is reason for the high security: Maha was shot eight times in the leg when the home was shot up in 2013.

The property was likewise the target of a drive by shooting one evening in February. No one inside was injured but a nurse at a nearby hospital was hurt when a stray bullet destroyed a window she was standing near. 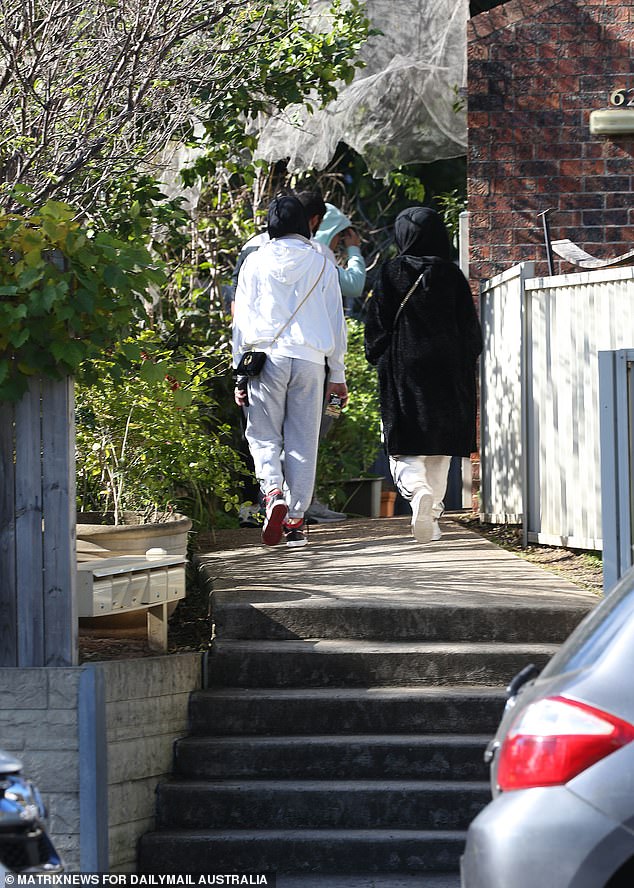 Mourners are seen arriving at Bilal Hamze’s mother’s home in Auburn, in Sydney’s west, on Friday following the news of his assassination 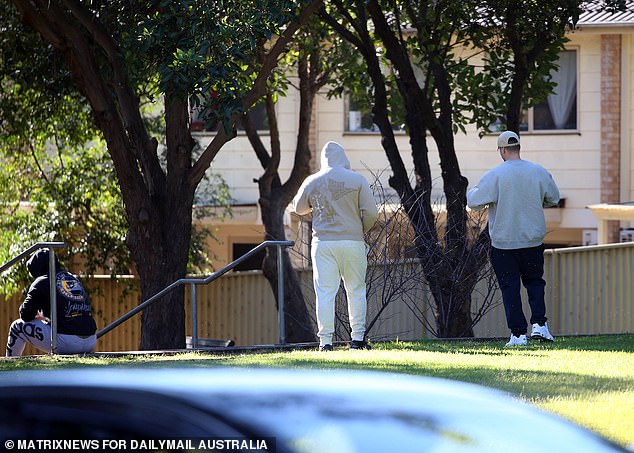 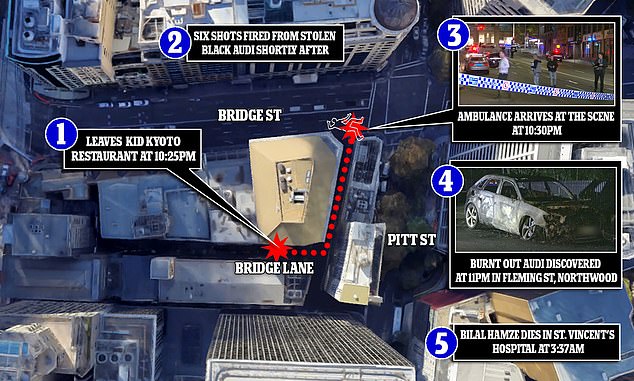 Hamze was shot twice in the stomach times after leaving Kid Kyoto restaurant. He then went into cardiac arrest in the ambulance and was unable to be revived when arriving at St Vincent’s Hospital. Police later discovered a burnt out Audi

‘Police were told a number of shots were fired by a per or persons … more than one person anyway, who was passing in a black vehicle,’ Superintendent Doherty said.

‘This was a brutal execution-style murder that was carried out in a busy street in the middle of Sydney CBD.’

‘It was extremely fortunate that no members of the public were injured.

‘We believe he left an establishment nearby and as he walked onto Bridge Street he was shot down in a hail of bullets.’ 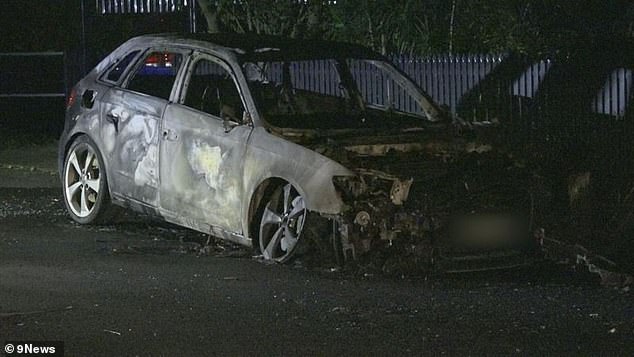 Police found the burnt-out wreckage of an Audi, believed to be the getaway car, on a quiet street in Northwood on the Lower North Shore on Friday morning 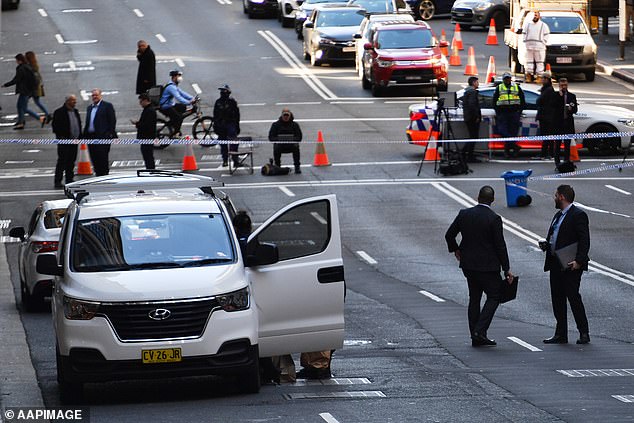 An emergency services source told Daily Mail Australia the gangster was shot in the stomach twice after leaving the popular Japanese restaurant Kid Kyoto. Pictured: Police at the scene on Bridge Street in the CBD on Friday

Criminal Groups Squad Detective Superintendent Robert Critchlow said Hamze had been warned he was a target of a rival.

‘He has been warned that he is at risk, he has been given advice as to his safety,’ Mr Critchlow said on Friday.

‘That advice was not received in the sense it was given. He sought to live his life the way he wanted to and made some choices.

Mr Critchlow said police were ‘certainly concerned’ and had been monitoring the situation.

‘There are regular things that arise in the criminal space that that we act upon quietly and in a way that doesn’t attract attention and we avert a lot of these crimes,’ he said.

‘But ultimately if a violent criminal group wishes to use violence towards another person to achieve their own goals, they will do it.

‘What we do now is gather the evidence and lock them up.’