A ‘beautiful’ man has died in hospital six days after a horror e-scooter crash with a VW Golf that also seriously injured his girlfriend.

Shakur Pinnock, 20, spent a week on a life support machine at Birmingham‘s Queen Elizabeth Hospital before he died yesterday.

It followed a collision involving a Volkswagen Golf in Prestwood Road, Wolverhampton, on Saturday, June 12.

He was airlifted to hospital where his girlfriend, who was a passenger on the scooter, was pictured holding his hand as she lay in another hospital bed. 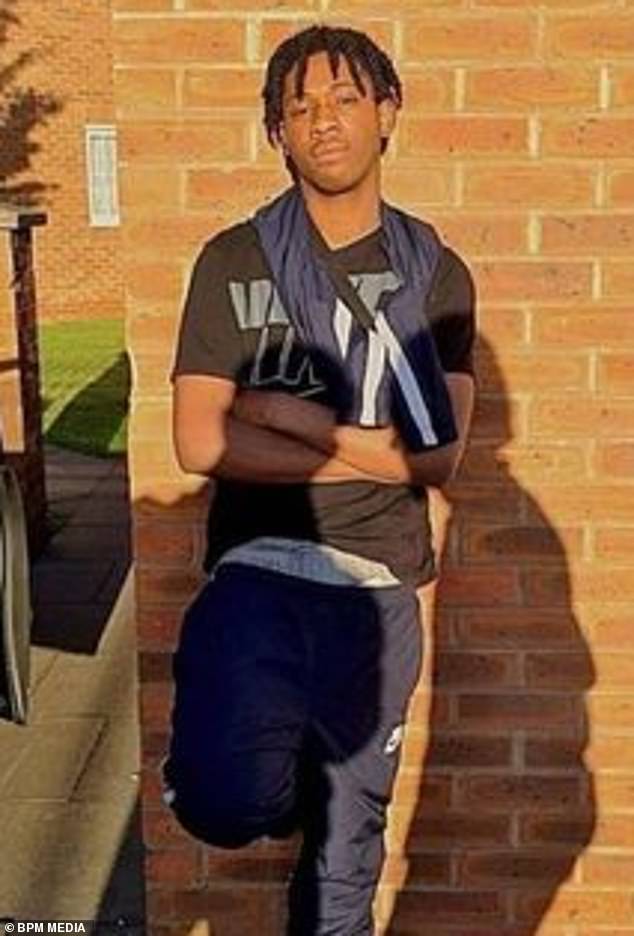 Shakur Pinnock (pictured), 20, spent a week on a life support machine at Birmingham’s Queen Elizabeth Hospital before he died yesterday 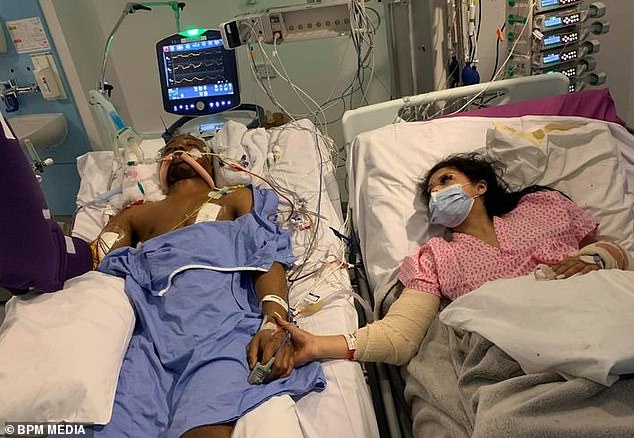 Shakur’s girlfriend, Chanté Hoosang, was also seriously injured in the crash. The 19-year-old, who was the passenger on the e-scooter, was taken to see Shakur in her hospital bed on Tuesday, June 15, so she could hold his hand

In a heartbreaking post on Facebook, Shakur’s mother, Celine Fraser-Pinnock, said he tragically died in hospital at 3.48pm yesterday.

She said: ‘I miss you so much. My beautiful, gorgeous baby. He succumbed to his injuries and passed away at 3.48pm today.’

The 56-year-old previously said medical staff had discussed turning off Mr Pinnock’s life support because they said they had done ‘all they could do’.

She said she begged them to keep the machine on to give her son ‘a bit more time to heal’. 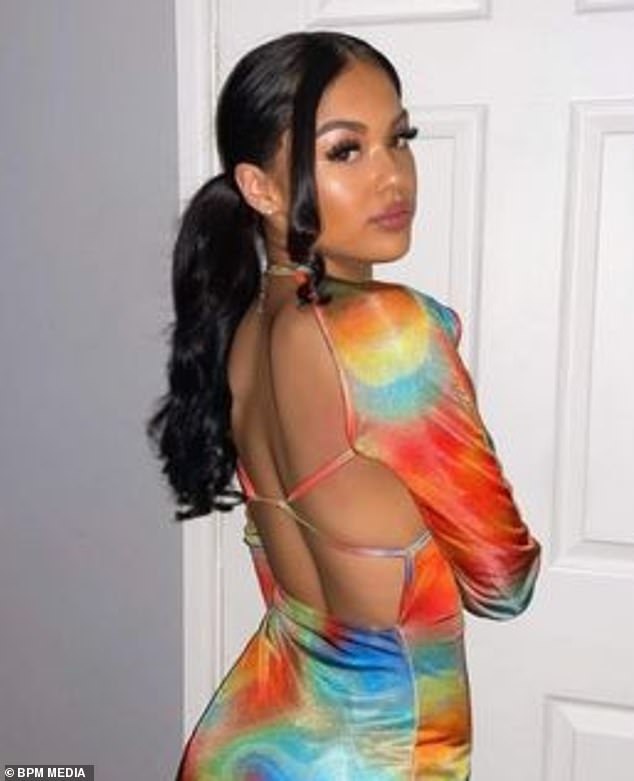 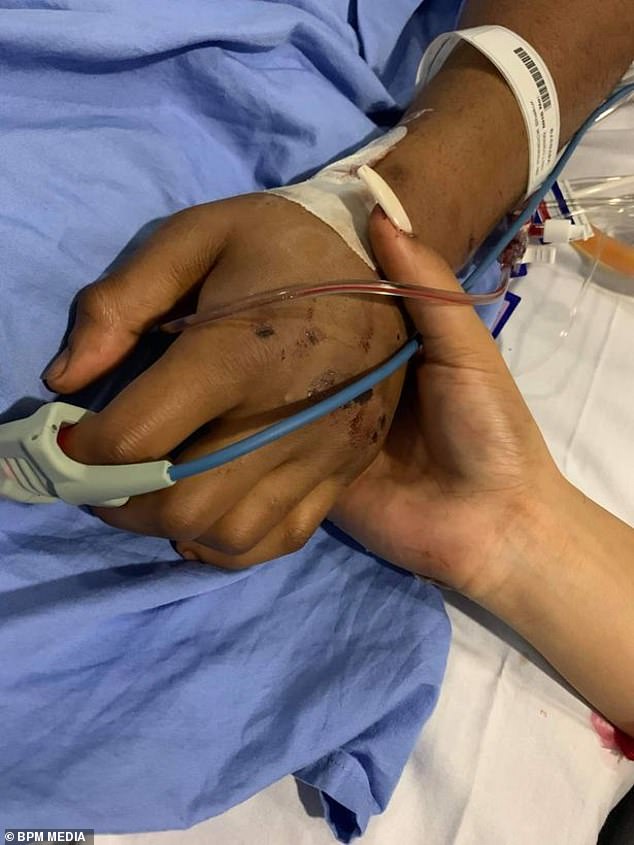 Mr Pinnock was airlifted to hospital where his girlfriend, who was a passenger on the scooter, was pictured holding his hand as she lay in another hospital bed

The 19-year-old, who was the passenger on the e-scooter, was taken to see Shakur in her hospital bed on Tuesday, June 15, so she could hold his hand.

In a Facebook post earlier today, her mum said: ‘I have no words sorry. Pray for Chanté’s and the family’s strength.’

A spokesperson for University Hospitals Birmingham NHS Foundation Trust said: ‘The trust extends its deepest condolences to the family and loved ones of Shakur Pinnock. 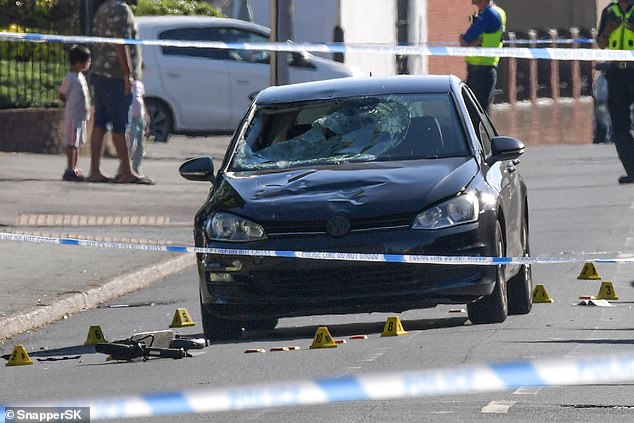 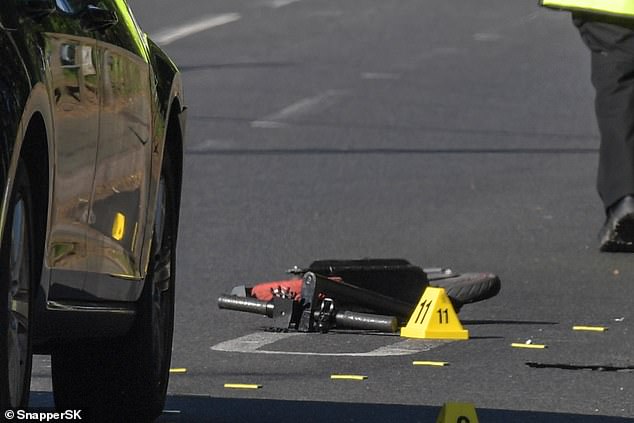 The death followed a collision involving a Volkswagen Golf in Prestwood Road, Wolverhampton, on Saturday, June 12 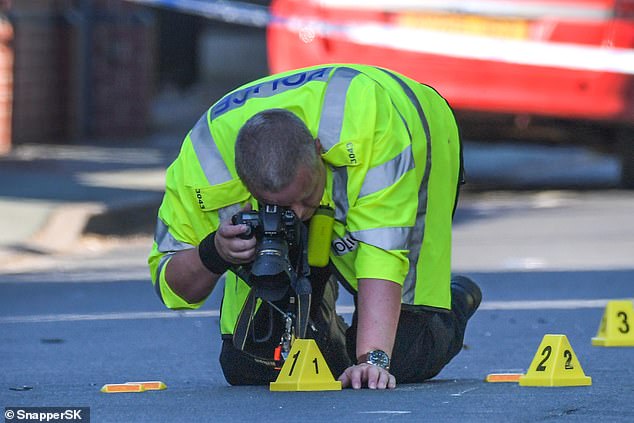 ‘Our thoughts are with them at this very sad time.’

West Midlands Police previously appealed for anyone who witnessed the crash to come forward.

Anyone with information or dashcam footage should contact the force via the live chat facility at www.west-midlands.police.uk between 8am and midnight.

It comes amid a rise in popularity of electric scooters, also known as e-scooters.

Their top speed is typically 25mph, though some can reach double that. Most models are illegal to ride on public roads.

As they become more ubiquitous, new legislation, including mandatory insurance, is being introduced to keep road users and pedestrians safe. 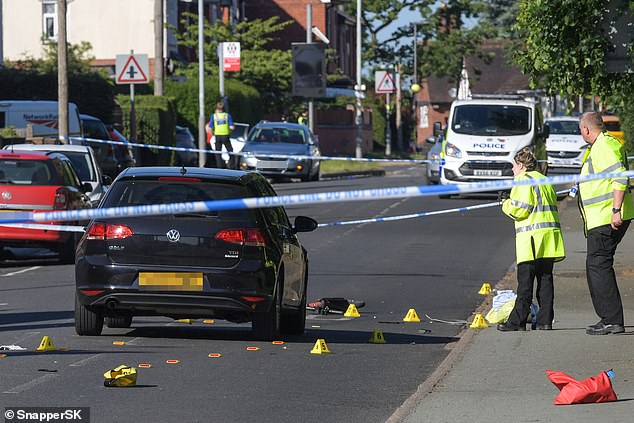 Investigators marked out the path of the car and placed evidence markers on the ground. West Midlands Police appealed for help in a statement released yesterday 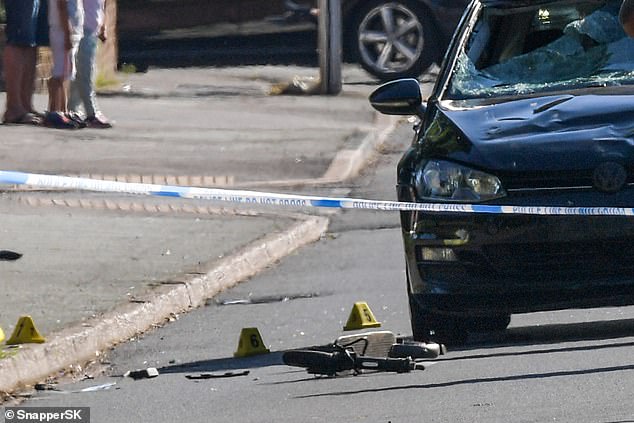 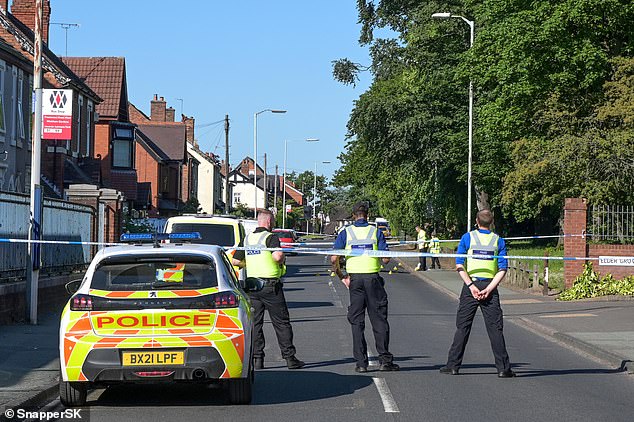 News of the incident comes amid a rise in popularity of electric scooters, also known as e-scooters

Riding a scooter under the influence of alcohol could lead to a driving ban, while using a mobile phone while riding could see six points added to your licence.

On June 7, London launched a trial of rental scooters with a top speed of 15.5mph. A similar trial is also under way in Newcastle.

It is the first time e-scooters will legally be allowed on the capital’s roads, although private e-scooters continue to be illegal in public areas in the UK.

London’s scheme will initially be restricted to six boroughs and areas – Canary Wharf, Ealing, Hammersmith and Fulham, Richmond, City of London and Kensington and Chelsea – although users will also be allowed to ride through Tower Hamlets.

The trial is using geo-fencing technology in a bid to stop e-scooters being used outside the set boundaries.

Under the trial, e-scooters will only be permitted on London’s roads and cycle paths – not on footways – and riders will be required to take an online safety course before their first hire.

The rental scooters come with insurance and riders must have a full or provisional driver’s licence to be allowed to hire one.

Unregulated privately-owned e-scooters remain illegal to use on public roads and have not been designed for safe use on the capital’s streets.

The Times reported that police last week seized 25 privately owned scooters in a ‘day of enforcement’ in London’s West End.

The government hopes e-scooters will offer Londoners an accessible and environmentally-friendly method of travel, without emitting greenhouse gases like petrol and diesel vehicles.

But evidence is mounting over their safety record, with critics suggesting they make it easier for criminals to whip people’s phones from their hands on the street and make a fast getaway. 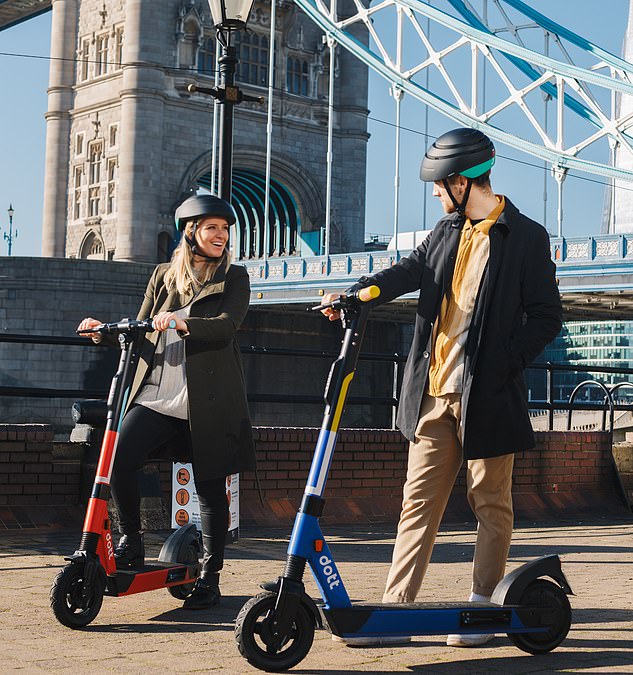 On June 7, London launched a trial of rental scooters with a top speed of 15.5mph. A similar trial is also under way in Newcastle. Pictured: Dott electric scooters, as seen in a promo image in London

In July 2019, TV presenter and YouTube influencer Emily Hartridge was killed while riding her e-scooter in Battersea, London.

Hartridge, who was thrown from the scooter on a roundabout, is believed to be the first person to die in the UK in an accident involving an e-scooter.

She was later ruled to have been riding too fast with an under-inflated tyre when she was tragically killed in a crash with a lorry.

In the UK, two other people are now known to have died using them, while in the United States the number of e-scooter accidents that leave people needing hospital treatment has risen by more than 222 per cent in four years.