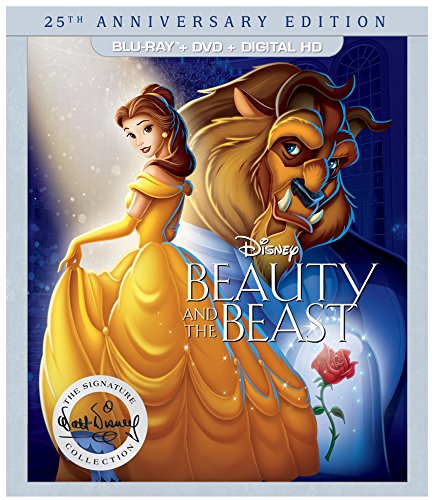 Be our guest at the enchanted 25th Anniversary celebration of BEAUTY AND THE BEAST, universally acclaimed as one of Disney’s finest animated features and now honored in the Walt Disney Signature Collection. Join brave, independent Belle on the adventure of a lifetime as she sets out to rescue her father and finds herself in the enchanted castle of a mysterious beast. Enjoy this timeless tale overflowing with unforgettable characters and Academy Award(R)-winning music (Best Song, Best Score, 1991)!|It took more than 600 animators, artists, and technicians three and a half years to complete the project.|BEAUTY is the first animated Disney feature scripted by a woman, Linda Woolverton.|The film marked the first time each animator was credited on screen specifically for the character he or she brought to life.|Disney’s animation department won a Scientific and Technical Academy Award for the design and development of the Computer Animated Production System used to make the film.|The style of illustration was inspired by French painters Fragonard and Boucher.