Every 4in on your belly ‘raises risk of early death’ by 11% but chunky thighs and big hips slash the chance of dying prematurely, study suggests

Having a beer belly raises the risk of premature death – even if the rest of your body is slim, research shows.

But having broad hips or larger thighs can help us to live longer, the study said.

Researchers looked at data from more than 2.5million people and found that every extra 4in (10cm) of waist size was associated with an 11 per cent higher chance of dying prematurely.

Many academics believe waist circumference is a more accurate indicator of obesity, and risk for illnesses such as type 2 diabetes and heart disease, than the commonly-used body mass index (BMI). 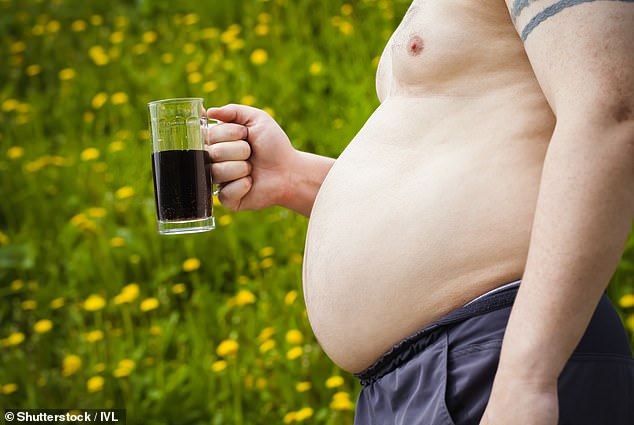 Researchers looked at data from more than 2.5million people and found that every extra 4in (10cm) of waist size was associated with an 11 per cent higher chance of dying prematurely (file image)

This is because fat around the waist – or ‘visceral fat’ – sits around vital organs including the liver, kidneys, intestines and pancreas.

The new study was published in the British Medical Journal.

Study author Tauseef Ahmad Khan, from the department of nutritional sciences at the University of Toronto, said: ‘People should be more concerned about their waist rather than focusing only on weight or BMI.

A study found that patients who took metformin, sold under the name Glucophage, have slower rates of mental decline and dementia.

Metformin is used to treat type 2 diabetes, which affects nearly four million in the UK. The study looked at 1,037 Australians aged 70 to 90 of whom 123 had type 2 diabetes. Those taking metformin had much better brain function and lower dementia risk compared to those not taking the drug.

Author Professor Katherine Samaras, of the Garvan Institute in Sydney, said: ‘This study has provided promising initial evidence that metformin may protect against cognitive decline.’

‘Waist is a better indicator of belly fat and while one cannot target where one loses fat from, losing weight through diet and exercise will also reduce waist and therefore belly fat.’

Dr Khan added: ‘Belly fat is the fat that is stored around the organs in the abdomen and its excess is linked to high cholesterol, high blood pressure, heart disease, diabetes, and stroke. Therefore, having more belly fat can increase the risk of dying from these diseases.’

The researchers found that most measures of abdominal fat were ‘significantly and positively associated with a higher all-cause mortality risk’ even after BMI was taken into account.

They said: ‘We found that the associations remained significant after body mass index was accounted for, which indicated that abdominal deposition of fat, independent of overall obesity, is associated with a higher risk.’

But their findings suggested that thigh and hip circumference were ‘inversely associated with all-cause mortality risk’.

Dr Khan said hip fat is considered beneficial and thigh size is an indicator of the amount of muscle.

The risks of belly fat were the same when accounting for BMI, suggesting that it increases a person’s chances of death regardless of their overall weight.

More than 70 health studies, which followed more than 2.5million people for between three and 24 years, were analysed by the researchers.

How to find the best company shares to invest in