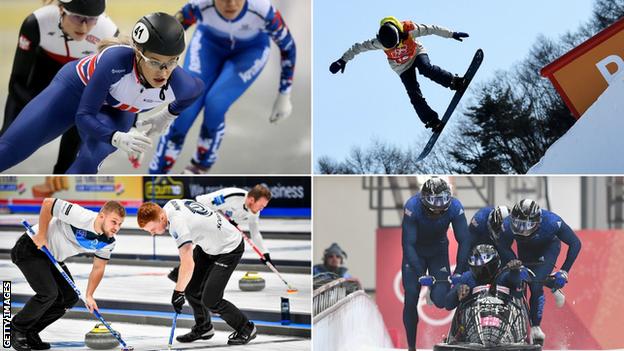 Since the coronavirus pandemic reared its ugly head in early 2020, the eyes of the sporting world have been on the Tokyo Olympics.

But less than six months after the re-arranged Games are due to finish next August, another Olympics will take place – the 2022 Winter Games in Beijing.

Little attention has been paid to winter sports athletes who saw their seasons cut short in the spring because of the global pandemic.

New seasons are starting but there have been measures put in place to limit the spread of Covid-19, including event cancellations, venue closures, and global travel restrictions in major sports.

BBC Sport has taken a look at GB’s key Olympic winter sports to look at the impact on preparations for the 2020-21 campaign – which is an important Winter Olympic qualifying period.

Fortunately for GB’s skiers and snowboarders, the winter season had, or almost had, finished when the pandemic struck, but UK-based athletes had to get creative with their off-season training, with gyms in garages and ramps in gardens.

Those UK-based athletes were the last to return to the snow in August when many headed to Europe for pre-season training camps.

Since then, some have already returned to competition. Alpine skier Alex Tilley got her World Cup campaign under way in Soelden in Austria in October but competition across most other disciplines kicks off this weekend.

The Alpine skiing World Cup tour will not travel to North America this season while a number of speed and technical events have been divided to reduce the number of participants at venues.

Others will travel stateside though, including freestyle skiers, while many will go east to the Snowboard, Freestyle and Freeski World Championships in China next February.

GB Snowsport says it “wouldn’t be surprised” if big events, such as World Cups, were cancelled, but are carrying on as if “all competitions are going to happen”.

However, some have already bitten the dust, including a ski and snowboard big air World Cup in China, while the cross-country, Nordic combined and ski jumping World Cups planned for Lillehammer next month have been postponed.

“We have to be very adaptable anyway coming from the UK and competing in snowsports. Nothing is ever that straight forward for us,” he said.

Both the new skeleton and two-man/woman bobsleigh World Cup seasons will get under way on Friday with back-to-back races in Sigulda, Latvia, before a further double header in Innsbruck, Austria, in December.

The first four-man bobsleigh World Cup will take place in January in Winterberg, Germany, as Sigulda does not host four-man events and the IBSF decided to only have two-man races in Innsbruck in order to “keep the number of participants to a minimum for the first half of the World Cup season”.

Races in North America will not take place this season because of quarantine and travel restrictions, while US athletes will only be allowed to compete from January.

As a result, February’s skeleton and bobsleigh World Championships have been moved from Lake Placid, USA, to Altenberg in Germany.

The only top-tier race taking place outside of Europe will be the World Cup season finale in Beijing in March, which will also double up as a test event for the 2022 Winter Olympics.

Both GB’s skeleton and bobsleigh athletes were able to return to training at their Bath base in mid-June, meaning Olympic skeleton bronze medallist Laura Deas could get back to pushing her sled instead of her car.

Preparations for the 2020-21 season have been incredibly disrupted for Britain’s skaters by the prolonged closure of ice rinks around the UK.

While British Ice Skating managed to get access to one rink for the performance figure skating squad from June, the short-track team could not return to the ice until September as they can only train in Nottingham.

Access to rinks has again been affected by the second lockdown in England, with only a select few able to open just for elite skaters.

The biggest issue facing skaters, however, is funding. With neither figure skating nor short-track funded by UK Sport, many skaters rely on income from coaching – which they have been unable to do during the pandemic – to help fund their own careers.

As for upcoming competitions, they are few and far between. In August, British Ice Skating took the “extremely hard” decision to cancel this winter’s British Championships.

At the elite level, all short track World Cups have been cancelled for the remainder of 2020 while the European Short Track Championships, due to take place in Gdansk, Poland, in January, have already been postponed by a week.

As for GB’s figure skaters, the focus is for January’s European Championships in Zagreb and the World Championships in Stockholm in March, which are both currently scheduled to go ahead as planned.

Britain’s curlers had to get creative with their training methods when lockdown arrived. While some had extensive home gym equipment, others used textbooks in rucksacks or farm tyres to keep in shape.

For the curlers that sweep, a household broom or curling broom on a wooden kitchen floor became part of their daily training programme.

They returned to the ice in August, one month later than normal, but a return to high-level competition remains some way off.

Curling was affected by the coronavirus pandemic even before the UK went into lockdown, with the cancellation of the men’s, women’s and mixed doubles World Championships in March. The men’s worlds had been due to take place in Glasgow.

A further blow was dealt when the World Curling Federation announced the cancellation of the European Curling Championships – due to take place in Lillehammer, Norway, this month – because of the “complications involved with international travel” caused by the virus’ spread.

All of the sport’s Grand Slams – equivalent to golf’s majors – have been cancelled while other events have been ruled out because of travel and quarantine restrictions.

As it stands, their first major competition is likely to be next year’s men’s, women’s and mixed doubles World Championships, which take place across March and April.