Belgium national team contented itself with a goal against Belarus in the World Cup qualifiers.. Video 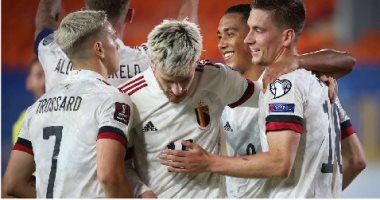 Belgium won a valuable victory over its host Belarus, with a goal free of charge, in the match that was held at the “Dynamo Stadium”, as part of the sixth round of Group E of the European qualifiers for the 2022 World Cup..

Denis Praet of Leicester City scored the winning goal for Belgium in the 33rd minute with a powerful shot from inside the penalty area.

The Belgium team was absent from a large number of players, most notably Romelu Lukaku, Witsel, Yannick Carrasco and goalkeeper Thibaut Courtois, who returned to Real Madrid after a statement from the coach, in addition to the star Kevin De Bruyne, who was absent from the camp due to injury, while Eden Hazard participated as a substitute in the 60th minute.

With this result, Belgium strengthens the top of Group E with 16 points from 6 matches, while Belarus is in fourth place with 3 points..

In the last round, Belgium defeated the Czech team with three goals, while Belarus lost 3-2 to Wales..

In the same group, Wales fell to a goalless draw against its guest Estonia.

Watch this bird wet a giant rat before swallowing it whole