Belgium strengthens its group lead in the World Cup qualifiers with three goals against the Czech Republic.. Video 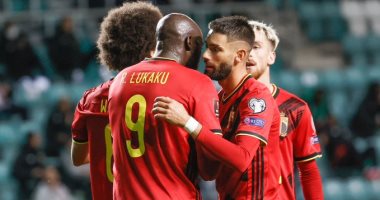 Belgium defeated its Czech guest 3-0 in the match that brought them together on Sunday evening at the King Baudouin stadium in the capital, Brussels, as part of the fifth round of Group E of the European qualifiers for the 2022 World Cup.

The Belgian national team ended the first half of the match with a double, scored by Chelsea star Romelu Lukaku and Real Madrid star Eden Hazard in the 8th and 41st minutes.

In the second half, Alexis Salmackers, AC Milan player, added the third goals of the Red Devils team, in the 65th minute.

The Belgian team raised its score to 13 points at the top of the tenth group, while the balance of the Czech team stopped at 7 points in second place.

In the same group, Wales, led by Real Madrid star Gareth Bale, defeated Belarus 3-2 in the meeting that brought them together this afternoon.