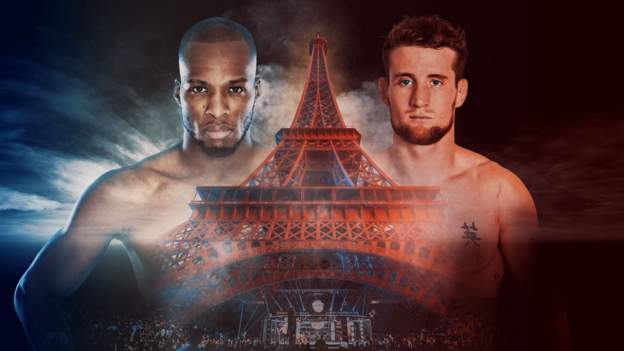 “Bellator wants a real show; they want someone to put a stamp on this groundbreaking moment,” said Michael ‘Venom’ Page.

“I’m definitely the man to call if you want to make some noise.”

History will be made in Paris on Saturday, as Bellator becomes the first major mixed martial arts promotion to host an event in France.

It is a sign of the US-based promotion’s intent to make an impact in Europe that it has beaten UFC to that honour.

And the BBC will be part of it – broadcasting MMA for the first time when it streams the 10-fight card live on the iPlayer.

The Bellator Paris event has been made possible by the legalisation of mixed martial arts in France, a ruling that came into effect at the start of January.

And Bellator has turned to charismatic Englishman Page to make Saturday night sizzle.

The Londoner takes on undefeated Scotsman Ross ‘The Hitman’ Houston in a highly anticipated welterweight bout – with Bellator hoping for the sort of fireworks that will make Europe take notice.

Since 2019, the Viacom-backed organization has made a concentrated effort throughout the continent by snapping up some of the most promising free agents on the market.

In the same year, Bellator launched its European Series, which has seen nine events hosted across several countries including the UK, Ireland and Italy.

So what can viewers expect when Page takes on Houston?

‘I was born to entertain’

Showman Page impressed London on Bellator’s first visit to the English capital in 2016 with a ‘Knockout of the Year’ against Brazilian veteran Evangelista Santos.

But despite his flair for the sensational, he’s putting no pressure on himself to dispatch Scotland’s Houston in a similar fashion.

“I try not to put too much pressure on myself to make it happen; you can definitely force it too much. It’s just who I am – I was born to entertain,” he told BBC Sport.

When the Londoner began making international headlines with Bellator in 2015, Inverness-born Houston was working on an oil rig just south of Paris.

The undefeated Scot eventually quit his job to pursue fighting professionally. After claiming the Cage Warriors welterweight title in 2018, he signed for Bellator earlier this year.

One of Europe’s top prospects, Houston knows a win over Page will have immediate title ramifications at 170 pounds.

“A win over Page puts me on course to my second world title and puts me right at the top of the division,” Houston said. “He’s got a huge name; he’s known all around the world, so I think it’s a great way to introduce myself.”

‘It took a lot of lobbying to get to this point’

Bellator’s Paris event will be limited to 1,000 spectators on Saturday because of Covid-19 safety protocols.

Although the Accor Arena will not boast a capacity crowd, Guillaume Duseaux – host of French podcast La Sueur – believes the arrival of Bellator underlines the diligent work of many who secured MMA’s legalisation in France, overturning a national ban on the sport in 2016.

“It took a lot of lobbying from Bellator, the UFC, and a lot of other organizations to get to this point,” Duseaux explained.

“The minister of sport, Roxana Maracineanu, was willing to develop MMA and that was very important. The success of MMA Factory with fighters such as Francis Ngannou, Cyril Gane, and coach Fernand Lopez has really helped the sport.

“The rise of Conor McGregor was also important for educating French people about MMA; he’s a huge star over here. When he fights, all the mainstream publications and broadcasters discuss it.”

MMA is a mainstream sport in the US, thanks to UFC’s television deal with ESPN, but cracking Europe has proved trickier.

“We are so excited about this deal. We’ve watched the sport grow over the years and it’s had its fair share of hurdles, particularly in this part of the world. Getting Bellator on terrestrial TV was a big deal, but getting it on the BBC’s iPlayer is truly historic.”

UFC president Dana White is likely to bring his promotion to France over the next 12 months, but if everything goes according to Page’s plans, the masses will remember that Bellator was the first major promotion to host an event in the region.

“Other people will definitely come to France and do business, but my performance will guarantee that no one will forget Bellator was the first big show in France,” he said.

MMA will be broadcast LIVE on the BBC for the very first time and you can watch live coverage of Bellator Paris on BBC iPlayer this Saturday, 10 October from 16:30 BST.

The average age of death from coronavirus is 82.4 years writes DAVID ROSE

These are the best zoo holiday light displays, according to readers

Viral Video of 6 Year-Old Being Banned from Call of Duty: Warzone Was Faked for a Competition

Alexei Popyrin out of Australian Open after another five-set marathon