Belle Gibson twist as she is embroiled in Melbourne drugs case

May 2009: Gibson claims to have undergone multiple operations on her heart and also momentarily died on the operating table

July 2009: Gibson claims that a doctor diagnosed her with terminal brain cancer and that she only had four months to live

Mid 2013:  Gibson releases an app which features her recipes

Mid-2014: Gibson begins working with Apple on the development of an Apple Watch-specific platform for her Whole Food Pantry 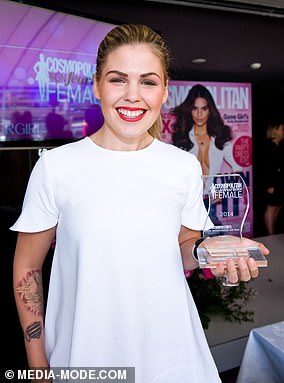 Gibson was briefly a celebrity – the recipient of 2014’s Cosmopolitan magazine ‘Fun, Fearless, Female’ award after her too-incredible-to-be-true battle with cancer

March 8, 2015: The Age newspaper unveils an investigation into Gibson’s claims of donating the proceeds of her profits to charity

April 2015: Women’s Weekly publishes an interview with Gibson, where she admits of her cancer claims: ‘None of it’s true’

May 6, 2015: Victoria’s consumer watchdog launches legal proceedings against Gibson over her false claims of defeating cancer by way of a wholefood diet

June 2015: Gibson gives a TV interview to 60 Minutes’s Tara Brown. ‘I’m not trying to get away with anything,’ she said

September 2017: Gibson is fined $410,000 by the Federal Court for her false claims of charitable donations

December 2019: Consumer Affairs Victoria is quietly secures its first warrant ‘of seizure or sale’ against Gibson

January 23, 2020: The Daily Mail reveals Gibson has been ‘adopted’ by the Ethiopian Oromo community of Melbourne and is going by the name Sobantu

May 21, 2021: The sheriff again raids Gibson’s home and neighbours witness her crying outside

June 1: It is revealed that Gibson was bizarrely embroiled in a criminal narcotics case at the Victorian County Court more than 18 months prior

The BBC has been accused of last-minute 'ambush' of Right-leaning new television network GB News, which...