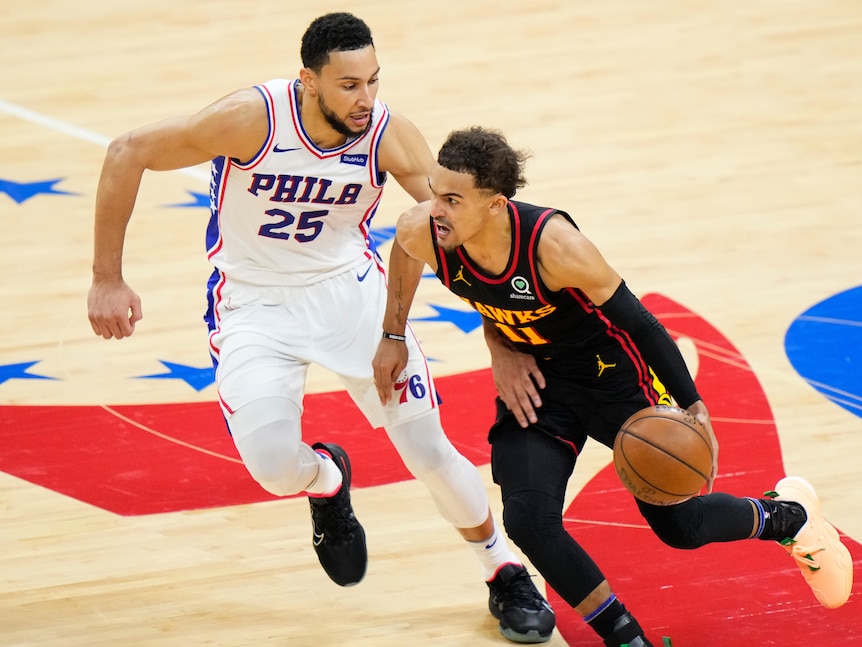 Ben Simmons’s top-seeded Philadelphia 76ers have been knocked out of the NBA playoffs in just the second round by fifth-seed Atlanta Hawks, with the Aussie star’s play coming under the microscope yet again.

It is the fourth straight year the Sixers have failed to progress past the second round of the playoffs, and comes after similar questions were asked about the make-up of the team when they were bounced 4-0 in the first round last season.

The 76ers famously underwent a lengthy rebuild, dubbed The Process, that ended with them pairing Simmons with superstar centre Joel Embiid.

Between them they have garnered seven All Star appearances, four All-NBA spots and five berths in All-Defence teams, but it has not translated to major playoff success.

Fourteen-year NBA veteran Jim Jackson said on the broadcast that Simmons’s place on the team was one of the biggest questions the team had to answer after another “disappointing loss”.

“In regards to your second-highest-paid player, potentially your best player, you can’t have him on the floor at the end of the game,” Jackson said.

“That is an issue they have to address, because ‘The Process’ has all been about these young men growing together and competing for a championship.

“You’ve gotten yourself to the best record in the eastern conference but not able to get over the hump because of the mental challenges of your second-best player. That has to be addressed.”

Simmons, whose inability to shoot from distance has seen him attract plenty of criticism since he was drafted in 2016, was once again in the firing line in the lead-up to the decider.

Coach Doc Rivers said calls for him to be benched ignored his defensive and play-making prowess, while admitting the team needed him to score more.

But, for the fourth time in the series, the 24-year-old could not get out of single digits, culminating in him turning down an apparently open dunk with his team down by two points with 3:30 left in the game.

Highlighting Simmons’s flaws was the performance of opposing point guard Trae Young, who averaged more than 30 points in the series during a breakout playoff run.