Bentley to spend £2.5bn turning Crewe into a dream factory for EVs

The first fully electric Bentley will roll off the production line within three years, and within eight years every new car will be fully electric as the Crewe plant in North West England is transformed into a ‘Dream Factory’, said the firm as it hailed the 10 year investment as a vote of confidence in Britain and ‘a major boost for the UK economy’.

The cash injection is a critical step in the ‘Beyond100’ strategy charting the second century of the company founded in 1919 by engineer Walter Owen ‘W.O.’ Bentley, which is now part of Germany’s giant Volkswagen Group, and sees Bentley under the umbrella of electric-power leaders Audi. 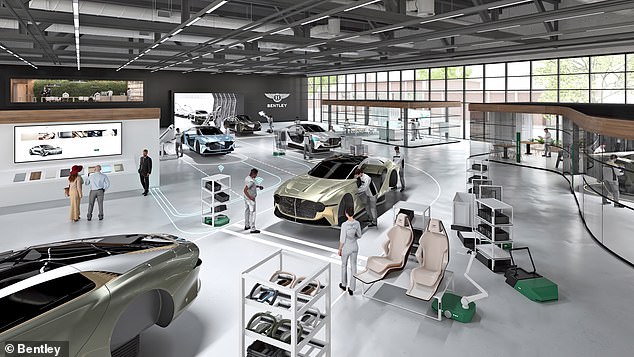 Confidence vote in Britain: Bentley today announced a landmark £2.5billion investment in its UK factory to fulfil its ‘green dream’ of building fully electric luxury cars in the UK from 2025

Bentley said: ‘The first Battery Electric Vehicle (BEV) is scheduled to roll off the production line in 2025 and will mark a significant moment in Bentley’s long and illustrious history.

‘It is also a critical step in the company’s Beyond100 strategy – the ground-breaking plan launched in 2020 that will ensure Bentley is exclusively electric and end-to-end carbon neutral by 2030.’

‘The significant investment programme will also result in a complete transformation of Bentley’s entire product portfolio, and the historic Crewe Campus.’

Adrian Hallmark, chairman and chief executive officer of Bentley Motors, said: ‘Beyond100 is the boldest plan in Bentley’s illustrious history, and in the luxury segment.

‘It’s an ambitious and credible roadmap to carbon neutrality of our total business system, including the shift to 100 per cent BEV in just eight years.

‘Our aim is to become the benchmark not just for luxury cars or sustainable credentials but the entire scope of our operations.

‘Securing production of our first BEV in Crewe is a milestone moment for Bentley, and the UK, as we plan for a long-term sustainable future in Crewe.’

Bentley’s company’s headquarters in Crewe is home to all of its operations including design, research and development, engineering and production of the company’s three model lines: Continental, Flying Spur and Bentayga. 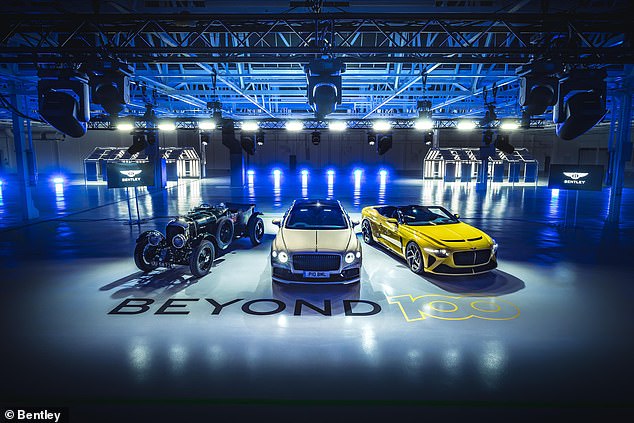 The cash injection is a critical step in the ‘Beyond100’ strategy charting the second century of the company founded in 1919 by engineer Walter Owen ‘W.O.’ Bentley 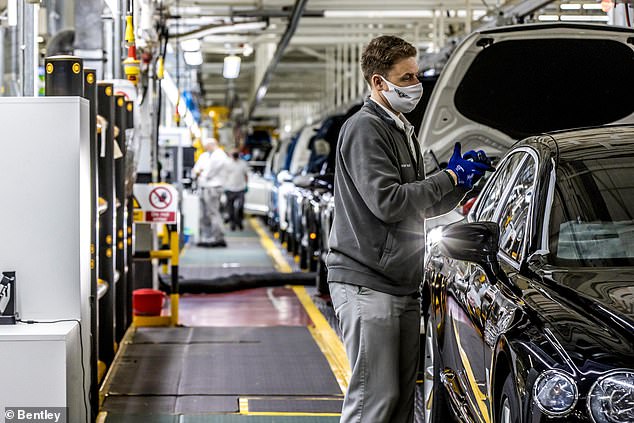 As part of its ambitious ‘Beyond100’ strategy and timetable Bentley aims to see:

The company said: ‘Bentley’s first-ever BEV will be developed and built in the UK with the company committing to investing £2.5 billion in sustainability over the next ten years

‘The announcement is a major boost for the UK economy and also helps secure Bentley’s first step into electrification at the production plant, where all Bentley models are built and 4,000 colleagues work.’

The company says it will ‘reinvent every aspect of its business’ across its ‘entire operations and products’.

Earlier this month Bentley announced record sales – up nearly a third – as it charges ahead with ambitious plans to electrify its entire range. It announced record deliveries of 14,659 cars to its customers world-wide in 2021 – an increase of 31 per cent on its previous record year in 2020 when it sold a then record 11,206 luxury vehicles. 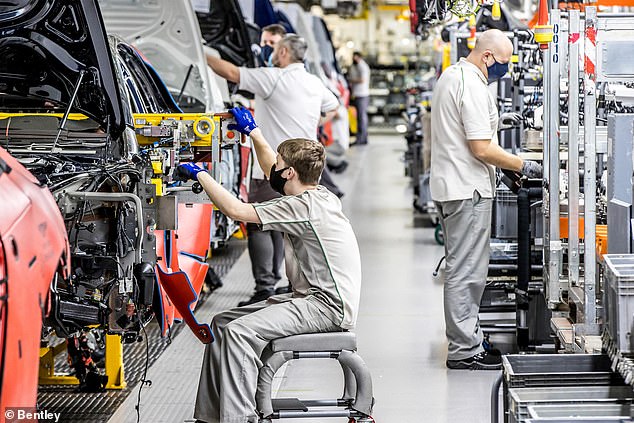 Bentley says the investment is a first step into electrification at the production plant and will preserve the jobs of 4,000 workers there

It highlighted ‘unprecedented’ demand for its petrol-electric hybrid models – spearheaded by the Bentayga SUV priced from £158,000 and the new Flying Spur limousine from £164,000. Some 1 in 5 Bentayga sales alone are of new Hybrid models as it commits to being ‘the first fully electrified and zero carbon luxury car company in the world.’

Bentley bosses say the results are a testament to the workforce and to measures taken to continue production despite Covid, logistical issues and global shortages of key computer chips needed in modern cars, and increasing demand for new hybridised models.

In October Bentley announced record third quarter operating profits to date of Euros 275million, putting it on course for a record full year, with figures to be announced in March.

Peter Bosch, board member for manufacturing at Bentley Motors, added: ‘Today is arguably the most important day in Bentley’s modern history, and is a testament to the hard work and skill of our colleagues in Crewe.

‘The journey really does start now. We are already marking the pinnacle in luxury car production and have already transformed our factory to become carbon neutral, with industry-leading environmental credentials.

‘With our new ‘Dream Factory’ concept, we now go to zero also with water, waste and other environmental impacts until 2030.

‘Unique craftsmanship, customer interaction and employee experience will be enhanced by digital tech, higher flexibility and new ways of personalisation.

‘We will develop the best of Crewe into the future benchmark of luxury car manufacturing.’