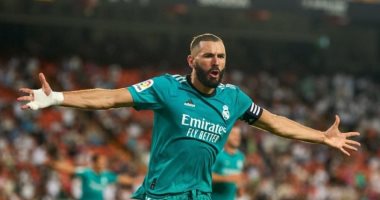 Real Madrid’s French striker Karim Benzema continues to shine remarkably with the Royal in the Spanish League this season 2021-2022.

Karim Benzema scored the killer goal for Real Madrid against Valencia, in the exciting match that brought the two teams together yesterday evening, Sunday, in the fifth round of the La Liga competition.

And the French Karim Benzema raised his score to 5 goals, at the top of the list of top scorers in the Spanish League, with a goal difference from the Brazilian Vinicius Junior, the runner-up with 4 goals.

According to the Spanish newspaper “Marca”, Karim Benzema, the 34-year-old Real Madrid striker, aims to repeat the achievement of the legend Puskas in the Spanish League.

She added that Real Madrid striker Karim Benzema’s award for La Liga’s Pichichi would make him the second oldest player Puskas has won at the age of 37.

Real Madrid beat Valencia 2-1 to take the lead in the Spanish League, in the match that brought the two teams together at the Mestalla Stadium, in the fifth round of the La Liga competition for the current season.

Real Madrid was the best party during the events of the first half and the most offensive, while Valencia relied on counter-attacks, and the most dangerous headers were brilliantly removed by Courtois, Real Madrid goalkeeper in the 43rd minute.

The first half witnessed the exit of 3 players from both teams due to injury. The young American, Noah Moussa, replaced the recent star Carlos Soler in the 15th minute, and Tony Lato replaced Terry Correa in the 23rd minute for Valencia, and Lucas Vazquez participated in the Real Madrid instead of Danny Carvajal in the 26th minute.