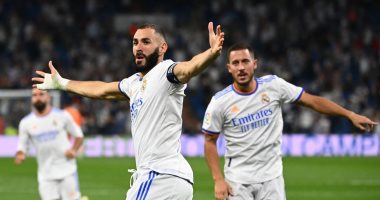 Most of the La Liga matches were played on Saturday and Sunday evenings, and there are only two remaining matches (Getafe with Elche and Granada with Real Betis) that will take place on Monday.

These are the top 10 facts about the fourth round of the Spanish League:

1- Benzema, top scorer in La Liga and with the most assists:

Karim Benzema scored in only four rounds in the season 5 goals and assisted four decisive balls. In yesterday’s match between Real Madrid and Celta Vigo at the Santiago Bernabeu stadium, the French striker scored a hat-trick, the latter from a penalty kick, and passed the ball to the goal that Vinicius Junior signed.

2- Football returns to the Bernabeu after 560 days:

After 560 days, football returned to the Santiago Bernabeu in the Celta Vigo and Real Madrid match, and the last match hosted by the Meringue stronghold was the Barcelona match that was held on March 1, 2020, where it ended with the victory of the owner of the land with two clean goals, and the French Zinedine Zidane was technical director of Real Madrid at the time, But he watched yesterday’s match from the stands.

3- Atletico Madrid and the last minute: 3 out of 10 points in the season:

In the third round match, Villarreal player Issa Mandy scored an own goal at the last moment of the Atletico Madrid match, which ended in a positive draw (2-2). In the fourth round match, which was held on Sunday evening against Espanyol, Thomas Lemar scored the second goal of “Rokhi Blancos”, which brought the three points to the Spanish League title holder, and thus Atlético Madrid scored 3 out of the 10 points it achieved this season in La Liga.

Frenchman Antoine Griezmann returned to Atletico Madrid again, and appeared in the Roji Blancos shirt in the Espanyol match for the first time since May 18, 2019, after which he left for Barcelona.

Griezmann played 61 minutes against Espanyol, during which he made a gray performance and hit only two balls that were outside the goal and did not succeed in any dribbling.

5- Valencia achieves two consecutive victories after a year and a half:

Since February 2020, Valencia has not been able to achieve two consecutive victories in the Spanish League, but it broke that rule yesterday, Sunday, after its victory over Osasuna by four goals to one, and in the last round match, it defeated Alaves with three clean goals.

Iker Muniain passed 3 decisive balls in the 4 goals scored by Athletic Bilbao in the Spanish League this season, with two wins and two draws in four matches so far.

Real Sociedad achieved its third consecutive victory in the Spanish League at the expense of the Cadiz team with two clean goals, scored by Mikel Oyarzabal, the first from a header and the second from a penalty kick, equaling the number of Turkish Nihat Kahveci as the team’s second historical scorer in La Liga with 58 goals, according to the official statistics of the competition. He stands 8 goals away from the team’s all-time top scorer: Mexican Carlos Vela, who scored 66 goals.

The 3 goals scored by Real Mallorca in the first 3 rounds of the Spanish League were enough to earn 7 out of 9 points, but it failed to continue its strong start, and the day before yesterday, Saturday, it suffered its first defeat against Bilbao with a clean double.

Levante has not achieved any victory in the Spanish League since last April 10, and despite scoring 13 goals in the last 8 matches (the last 4 matches last season and the first 4 this season), it was not enough to achieve any victory, as it tied in 6 matches, the last of which was Last Saturday against Rayo Vallecano, with a goal for the same, and lost 2.

10- The first goal of Espanyol in La Liga .. was not enough to win:

The Espanyol team scored its first goal of the season yesterday, Sunday, in the Atletico Madrid match, through Raul de Tomas, but it was not enough to achieve its first victory after returning to the first division.

TRON Price Analysis: Will the token get to $1, and should you buy TRX in September 2021?

TRON Price Analysis: Will the token get to $1, and should you buy TRX in September 2021?