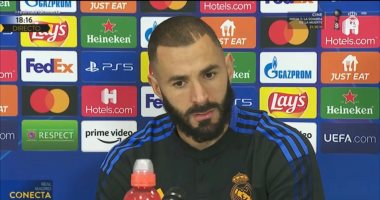 Real Madrid striker Karim Benzema confirmed that winning titles with Real Madrid is more important than winning the Golden Ball, during the statements he made during the press conference for his team’s match against Inter Milan, scheduled to be held at nine in the evening, tomorrow, Wednesday, in the first round of the group stage of the Champions League. Europe.

Benzema said: “There is no secret to the improvement, it is the product of daily work and every year I take better care of myself because I work in training and that shows later in the matches.”

Benzema added: “I think we are a very strong team and what I have to do is always help Real Madrid to try to win something.”

Benzema confirmed: “The dream of all the players is to win the Ballon d’Or, but the most important thing is to win titles, but of course I want to win this cup one day.”

“I think I’ve already talked a lot about Kylian Mbappe, we all know and I think the best thing for me is to focus on tomorrow’s match.”

And the Real Madrid striker stressed: “What I did with Cristiano Ronaldo and Bale is over and I think it is a trio that will remain in football history, with Vinicius and Eden Hazad I am good too, they are great players.”

Benzema continued: “I think Vinny is a young player who now has experience at this club. It helps us a lot. He is also helping us quickly and will continue to do so. I always talk to him and try to help him succeed here. He’s a top player and I believe in him.”

He explained: “My problem with my finger will not allow me to stop, I do not have time, so I play with a bandage.”

He continued: “The Champions League is the highest competition. We are not behind anyone, they are 11 against 11 and there are no favourites. There are many matches where people think the team will win and then it does not happen. Let’s go fight for the Champions League because it is very important.”

And the Real Madrid star added: “The goals committed are a problem for the whole team. We work to avoid receiving goals, but that happens sometimes. We will work in training so that this does not happen.”

He concluded his speech: “The Champions League is a special tournament, all teams want to win and we have to enter the stadium to try to do that.”