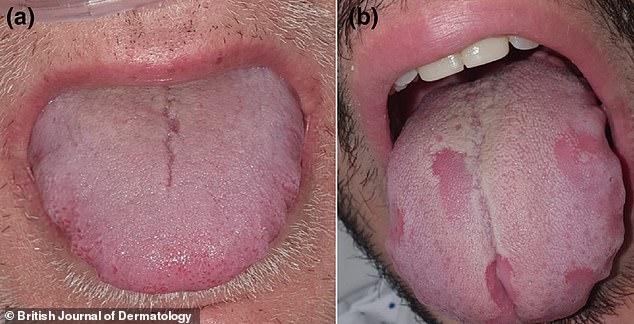 Is ‘covid tongue’ the latest sign of infection? One in four coronavirus patients develop bumps and swelling in their mouth, while 40% get red, burning feet or hands, study finds

By Mary Kekatos Senior Health Reporter For Dailymail.com and Afp

Changes to the mouth, hands or feet could be the latest signs of infection with the novel coronavirus, a new study suggests.

Researchers found that 25 percent of COVID-19 patients seen in April 2020 had a tongue inflammation or bumps and ulcers on the tongue.

What’s more, nearly 40 percent of those patients had redness, burning and hives on the palms of the hands and the soles of the feet.

The team, from Hospital Universitario La Paz, Madrid, Spain, says doctors and nurses should examine the oral cavities and hands and feet of suspected COVID-19 patients in order to potentially diagnosed them more quickly

About one in four of 666 COVID-19 patients treated in April in Spain had so-called ‘covid tongue,’ which included inflammation, bumps and swelling of the tongue (pictured above)

The findings were published in the British Journal of Dermatology in the form of a ‘research letter’ in September but were presented on Tuesday.

It involved 666 mild-to-moderate COVID-19 patients treated between April 10 and 25 at the field hospital at IFEMA, the Madrid exhibition center, which closed on May 1.

Overall, 45.7 percent had changes seen on their tongues, hands or feet.

About one in four patients, 25.7 percent, noticed changes to their tongue, what has become known as ‘covid tongue.’

The most common change was transient lingual papillitis, which is inflammation of the papillae, or the small bumps on the surface of the tongue.

Another 6.9 percent reported having aphthous stomatitis, which occurs when  benign and non-contagious mouth ulcers from.

In addition, 6.6 percent reported glossitis, an inflammation of the tongue that causes it to swell in size and change in color.

Nearly four percent had patchy depapillation which is when a whitish coating appears on the surface of the tongue.

Meanwhile, approximately 40 percent of patients reported changed to their hands and feet.

The most common condition was diffuse desquamation, which is widespread skin peeling, in which the outermost layer is shed,

Some patients also reported a burning sensation, hives or a rash on their extremities (above)

About 15 percent had reddish‐to‐brown appear on the palms of their hands and soles of their feet causing an urge to scratch.

Seven percent of the patients reported burning sensation, called erythrodysesthesia, at the beginning of the disease.

A smaller percentage, 6.9 percent, reported hives while 2.9 percent had a rash.

‘In summary, almost half of patients with mild‐to‐moderate COVID‐19 admitted in a field‐hospital during a two‐week period showed mucocutaneous findings,’ the authors wrote.

‘Redness and swelling of the hands and feet, fine palmoplantar desquamation and reddish‐to‐brown macules can help us to diagnose COVID‐19 infection and should be routinely checked.