President Joe Biden on Friday vowed there would be consequences for Russia after another round of ransomware attacks but he didn’t detail what those might be.

Biden, however, said he felt optimistic about his conversation with Vladimir Putin that took place earlier in the day. He called his Russian counterpart to demand Putin ‘take action’ about the ransomware attacks on the United States, warning him that he will take ‘any necessary action’ to defend the U.S.

‘It went well. I’m optimistic,’ Biden told reporters at the White House about the call.

The president said he made it ‘very clear’ that when a ransomware attack originates on Russian soil ‘we expect them to act’ even if the attack wasn’t directed by the Russian government.

‘I made it very clear to him that United States expects when ransomware operation is coming from his soil but is not, not sponsored by a state, we expect them to act,’ he noted.

He also replied ‘yes’ when asked if there would be consequences for Russia but offered no further details. When Biden met with Putin in Geneva last month, he issued his first warning of consequences to come if the cyber attacks persisted. 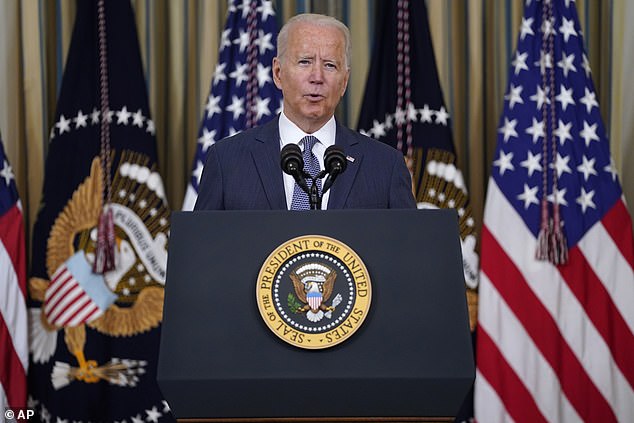 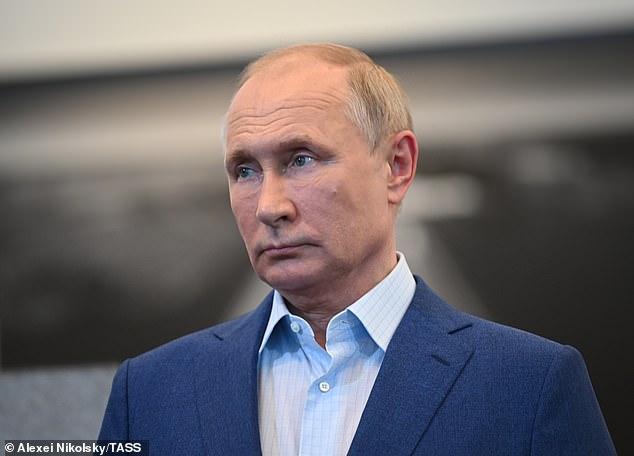 In the one-hour call with Putin, Biden ‘underscored the need for Russia to take action to disrupt ransomware groups operating in Russia and emphasized that he is committed to continued engagement on the broader threat posed by ransomware,’ according to a readout of the call from the White House.

The president ‘reiterated that the United States will take any necessary action to defend its people and its critical infrastructure in the face of this continuing challenge,’ the statement noted.

The call came after REvil – a Russian-based group of cyber hackers – launched another round of ransomware attacks last week and Republicans criticized Biden for giving an initial lackluster response.

White House press secretary Jen Psaki said the call took place because Biden knew, even after his June sitdown with Putin in Geneva, that ongoing conversations would need to take place at the leader level.

‘The president knew, even when they met in Geneva, that there would be a need for ongoing discussions and engagements,’ she said at her press briefing on Friday.

‘I’m not going to give you a tone and tenor readout here,’ she said.

She said Biden made clear that ‘we reserve the right to take action.’

Biden said on Wednesday he would personally deliver a message to Putin about the rash of cyber attacks taking place on American companies and groups.

‘I will deliver it to him,’ he told reporters at the White House when asked his message for the Russian president.

Last week, a U.S. software firm was hit by a REvil – a Russian cybercriminal group – in a ransomware attack that crippled hundreds of companies worldwide.

Kaseya provides services to more than 40,000 organizations and it was considered the single, largest global ransomware attack on record.

Additionally, Russia’s S.V.R. intelligence agency hacked a contractor for the Republican National Committee last week, the New York Times reported, although the committee said none of its data had been breached.

Psaki said on Tuesday that the US and Russia have kept up a dialogue on the issue since the June 16 sitdown between the two leaders.

Since the Geneva summit ‘we have undertaken expert-level talks that are continuing, and we expect to have another meeting next week focused on ransomware attacks,’ she said.

‘And I will just reiterate a message that these officials are sending. As the President made clear to President Putin when they met, if the Russian government cannot or will not take action against criminal actors residing in Russia, we will take action or reserve the right to take action on our own,’ she added.

The White House has not offered any hint of their response or what action officials may take. 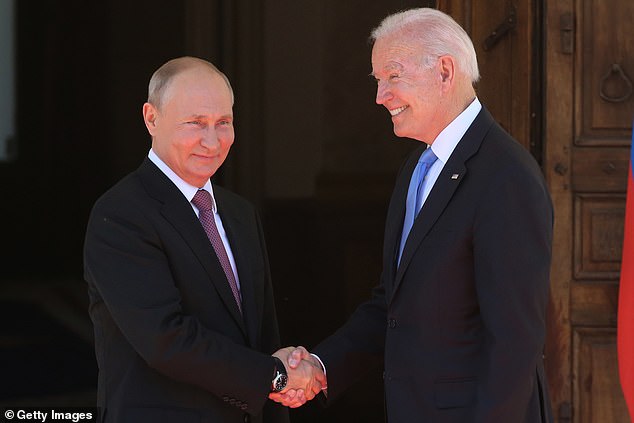 At their meeting on June 16 in Geneva, President Biden warned President Putin he will take action if the ransomware attacks continue

Right-wing media and groups excoriated Biden for an awkward exchange in Michigan on Saturday where he fumbled with paper in his suit jacket pocket to answer a question on the ransomware attack.

During that trip to a cheery farm store, Biden said he was just briefed on the attack, which was launched on Friday, but he had to refer to notes to give a non-answer updating reporters on the situation.

And, on Tuesday, Biden again pulled out notes to deliver a prepared response to reporters questioning whether he would retaliate against Russia.

‘I can tell you a couple things,’ Biden said when asked if the attack warrants a response from the U.S. as he started reading from a notebook. ‘I received an update from my national security team this morning.’

The president insisted the attack ‘appears to have caused minimal damages to U.S. businesses,’ despite reports showing at least 1,000 American companies were affected – and the hacking gang claims up to 1 million companies were targeted.

‘We’re still gathering information to the full extent of that attack,’ Biden said after delivering an update on the coronavirus pandemic and state of vaccinations from the White House.

He previewed: ‘I’m going to have more to say about this in the next several days. We’re getting more detail and information – but that’s what I can tell you now.’

REvil was able to breach Kaseya, a Miami-based IT firm, and use their malware protection product to target, it claims, up to 1 million different businesses in at least 17 different countries.

The gang is publicly demanding $70 million bitcoin to fix the issue, which the White House is advising Kaseya against.

REvil has lowered their asking price to $50 million, according to private negotiations reported by Reuters on Monday.

Biden has faced a slew of criticism for his slow response to the ransomware attack and his failure to ‘get tough’ on Russia despite vowing retaliation if there were any attacks on U.S. critical infrastructure.

Rep. John Katko told DailyMail.com Monday night the U.S. is ‘facing a time of reckoning’ in relations with Russia.

‘Only weeks after President Biden sat down with Putin and allegedly talked a tough game with Russia, hackers from Russia again attacked thousands of U.S. companies, compromising our nation’s critical infrastructure,’ Katko, ranking member of the House Committee on Homeland Security, said.

OPINION: Lakers' Anthony Davis on injury tag: 'I don't have to prove nothing to anyone'

All these shiny new swimming pools, glowing stadiums and miles of pleasant countryside — with Mount...