Biden heads to Illinois to push his American Families Plan

President Joe Biden will pitch his plan for free childcare in a trip to Illinois on Wednesday, touting the ‘human’ infrastructure package he will push to pass Congress without Republican votes.

Biden will visit McHenry County College in Crystal Lake, a community college with a workforce development program and a child care center similar to the programs he wants to pass as part of his American Families Plan.

The sales pitch is part of the president’s larger economic agenda that includes around $4 trillion in traditional infrastructure spending along with his investments in social programs such as free community college, green projects and expanded paid family medical leave. 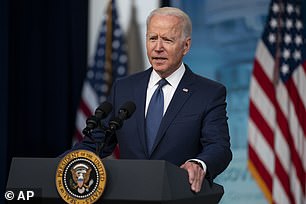 The administration is negotiating a nearly $1 trillion bipartisan infrastructure bill – which focuses on traditional infrastructure projects –  with senators that would need Republican support to pass.

Biden is looking to pass a second bill – focused on social programs – through the Senate via a process called reconciliation, which would allow Democrats to get it approved without a single Republican vote and bypass the 60-vote threshold needed to advance legislation.

Liberals, however, are stacking that measure with more than $6 trillion in spending to expand social programs that benefit working Americans and the poor. Moderate Democrats like Senator Joe Manchin of West Virginia have expressed their concern at the ballooning costs.

Republicans oppose the measure, which is financed by tax increases on the wealthy.

Biden has made clear he would like both measures to pass but he said one is not dependent upon another.

In his remarks during the trip, Biden will discuss his plans for child care and workforce development programs, two years of free community college, universal prekindergarten and paid family and medical leave.

‘As the president presses for the bipartisan infrastructure framework, he’s also pressing ahead on a dual track for the full breadth and scope of the Build Back Better agenda, which includes his critical climate priorities and the American Families Plan,’ White House press secretary Jen Psaki said Tuesday when previewing his trip.

Congressional Democrats are hoping to move on both bills in the halls of Capitol Hill this month but the legislative language on the two measures is still being worked out. 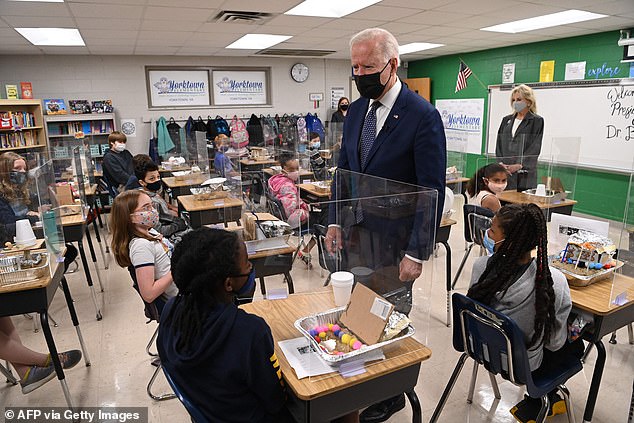 Biden will pitch his American Families Plan and its provisions for free childcare, universal pre-K and free community college during the trip; above Biden visits a Virginia elementary school in May

Biden will be greeted by Chicago Mayor Lori Lightfoot and Illinois Gov. J.B. Pritzker when he lands. He’ll be stopping in a district held by Democratic Rep. Lauren Underwood.

The district is a key swing district that will help determine which party controls the House of Representatives after next year’s midterm election.

Biden won Illinois in the 2020 presidential election but Donald Trump carried McHenry county, where Biden will visit on Wednesday.