President Joe Biden toured stunning hurricane devastation in LaPlace, Louisiana Friday – and tied to the recovery effort to his ‘Build Back Better’ agenda and his $3.5 trillion reconciliation plan that a top Senate Democrat wants to put it on a slow track.

Days after Hurricane Ida walloped the Louisiana coast and followed a path of destruction through the state, Biden came here to meet with local officials.

‘You know I get kind of beat up, criticized,’ Biden said at a meeting with government officials in LaPlace, an area that bore substantial damage when Hurricane Ida hit.

‘Things have changed so drastically in terms of the environment. You’ve already crossed a certain threshold. You can’t build back a road, a highway or a bridge to what it was before. You’ve ego to build back to what it is now,’ Biden said.

He spoke to officials after landing in New Orleans and driving through rows electric poles toppled by the storm.

Dozens of white line crews could be seen lining the road as his motorcade passed. Biden once again praised crews from 24 states he said had come to aid the relief effort. One lineman in a green safety jacket gave a one-finger salute to the motorcade as it passed, as DailyMail.com observed traveling with the president. 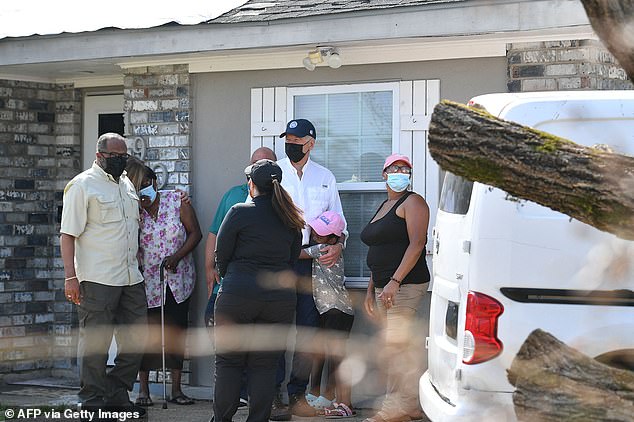 President Joe Biden tours a neighborhood affected by Hurricane Ida in LaPlace, La., giving a hug to a child 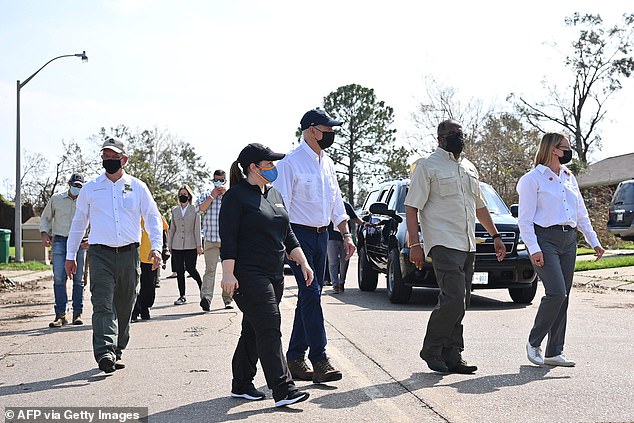 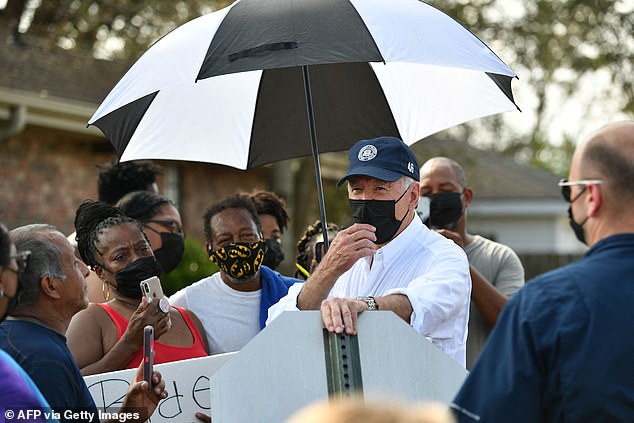 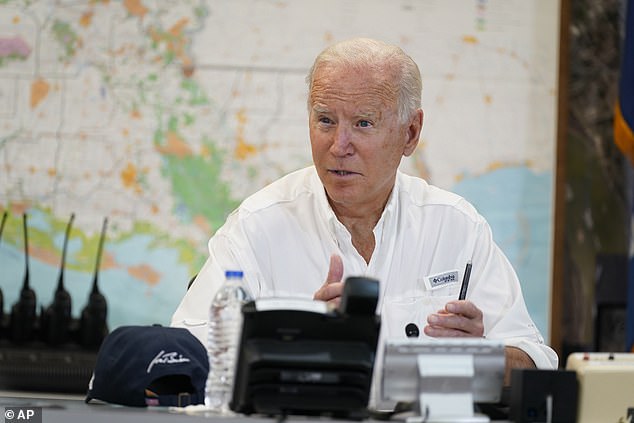 Biden saluted those crews in his brief remarks while pool cameras rolled, noting that people responded from across the country to help.

‘You’re not going to put up the same system … Build it better,’ he said, talking about burying power lines even if it costs more to defray future costs.

‘I just want you all focused on that as you take a look,’ he said, with House Republican Whip Rep. Steve Scalise (R-La.) in the room. Not a single Republican backed his sweeping ‘reconciliation’ bill when Democratic leaders brought it up, while his infrastructure bill drew some Republican support in the Senate.

His pitch came hours after Sen. Joe Manchin (D-W.Va.) published a searing op-ed called for a ‘strategic pause’ for the reconciliation bill – a posture that could imperil it.

He pointed to the Feds’ $15 billion in levees after Hurricane Katrina, with a system that appears to have held and kept New Orleans mostly dry.

‘That was a lot of money. Think how much money it saved?’ Biden said.

He said his daughter Ashley, who went to Tulane, told him: ‘What are you spending time talking to the governor of New York? Why are you not in Louisiana?’

New York also got slammed by the hurricane, and some locals fear they could lose the nation’s attention.

Biden talked up $500 FEMA checks. Sometimes it’s just what you need that moment that can make a difference,’ he said. 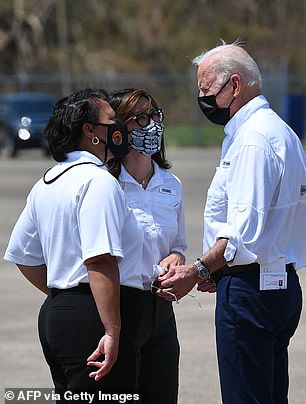 Biden acknowledged he was pitching his program in the fallout of the storm. ‘I realize I’m selling as I’m talking to you now,’ he said. But he said his infrastructure proposal would provide good paying jobs.

His press aide, Karine Jean-Pierre, wouldn’t provide specifics when asked if Biden had met with Manchin, who in a searing op-ed called for a ‘strategic pause’ for the reconciliation bill. Manchin has considerable leverage in the 50-50 Senate, and could stall the reconciliation package or use his sway to try to slash its bottom line.

On his stop, Biden will visit some of the hardest hit areas south of LaFourche, Louisiana where the Category 4 Hurricane made landfall and ripped through structures and devastated entire communities.

His trip comes after Hurricane Ida pummeled Louisiana, before making its way through a swath of the country to cause massive flooding in the Northeast, causing further mayhem and killing dozens. The severe flooding stunned residents of Pennsylvania, New Jersey and New York off guard – and could draw national attention away from hard hit coastal areas that took the initial brunt of the storm.

The trip will give Biden the opportunity to address the federal response and meet with local leaders – just days after he defended the chaotic evacuation from Afghanistan. 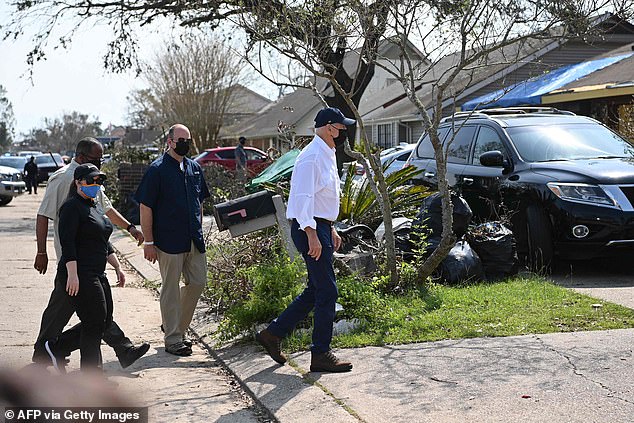 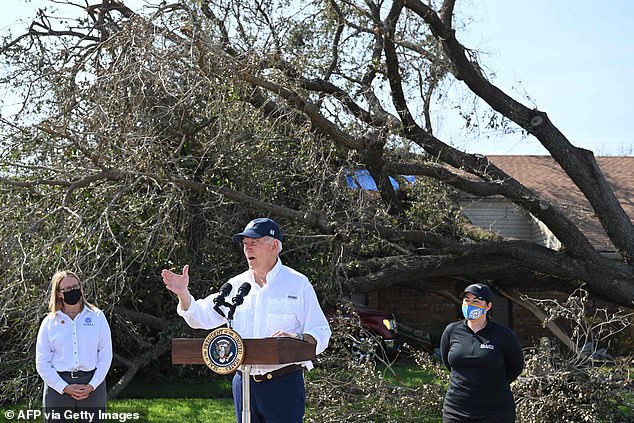 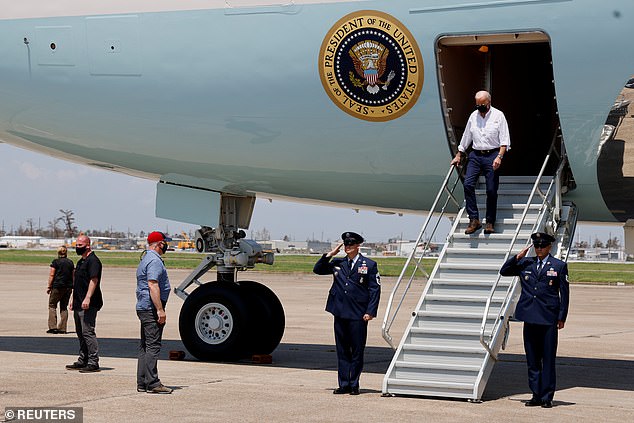 President Biden, arriving in New Orleans, will take an aerial tour of some of the hardest hit communities, including Laffite, Grand Isle, Port Fourchon and Lafourche Parish 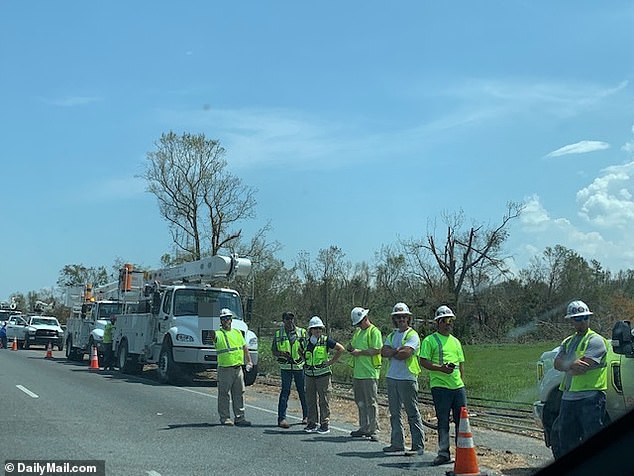 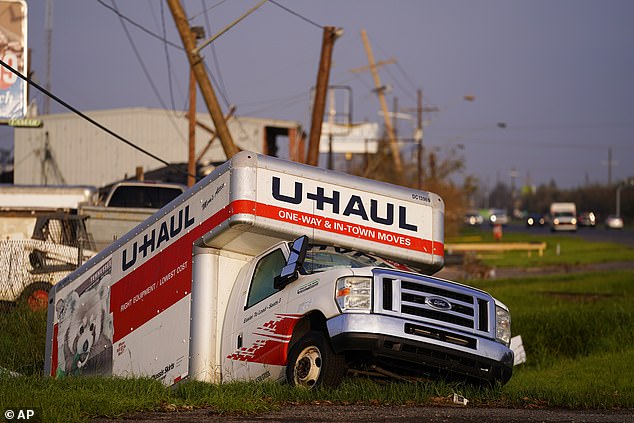 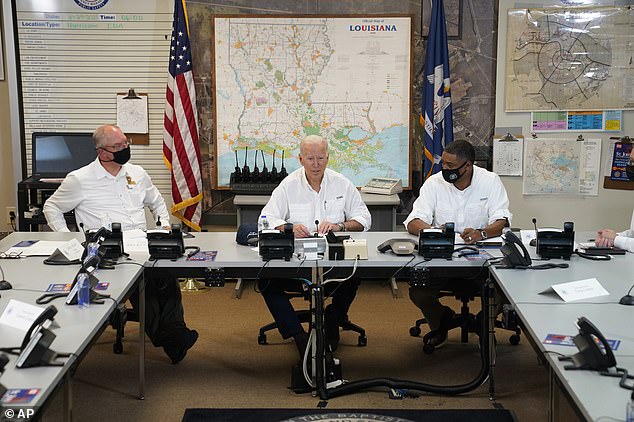 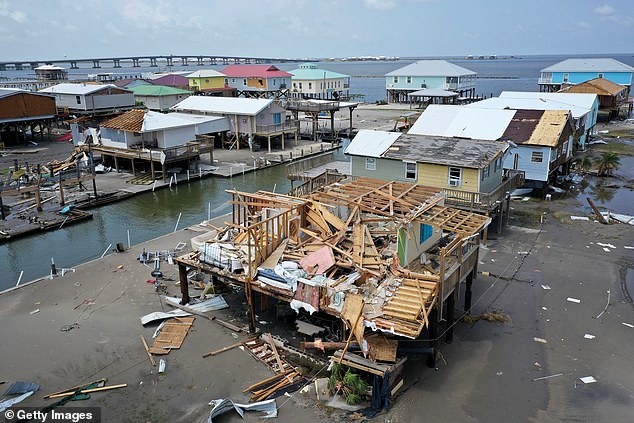 He will also take an aerial tour of some of the hardest hit communities, including Laffite, Grand Isle, Port Fourchon and Lafourche Parish.

Biden told the nation Thursday he had been monitoring the devastation caused by Hurricane Ida ‘closely,’ after the Category 4 Hurricane slammed into the Louisiana coast, bringing death and destruction on the way as it made its way up through Pennsylvania and New York.

‘While the catastrophic flooding wasn’t as severe as it was during Hurricane Katrina 16 years ago, Ida was so powerful that it caused the Mississippi River literally to change direction — the flow — change the flow temporarily,’ Biden noted.

He said the ‘good news’ is that the $15 billion levee system put in place around New Orleans after catastrophic failures during Hurricane Katrina appears to have held.

‘It held. It was strong. It worked,’ he said. ‘But too many people and too many areas are still unprotected and saw a storm surge and flooding that was devastating,’ Biden said. 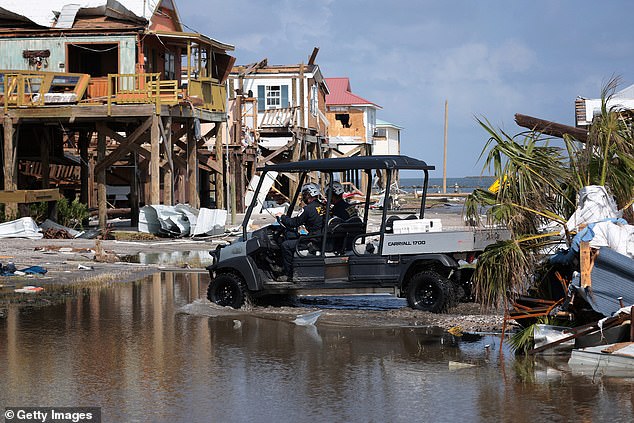 A search and rescue team drives through standing water while checking homes destroyed in the wake of Hurricane Ida on September 2, 2021 in Grand Isle, Louisiana. Ida made landfall August 29 as a Category 4 storm near Grand Isle, southwest of New Orleans, causing widespread power outages, flooding and massive damage

He pointed to 170 mile and hour winds he said were still unconfirmed by FEMA ‘causing unimaginable damage, with debris and downed powerlines making roads impassable and slowing response efforts to save folks and property.’

Floods let to a series of deaths in the northeast as waters raged in Philadelphia and even Biden’s hometown of Wilmington.

Biden said he will meet with Louisiana Gov. John Bel Edwards and various parish presidents as he views the disaster response. 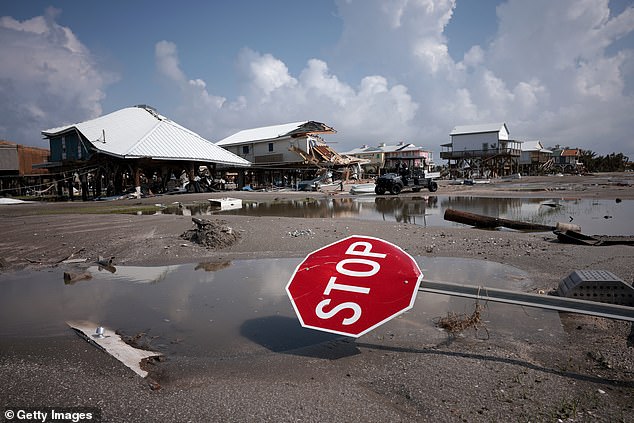 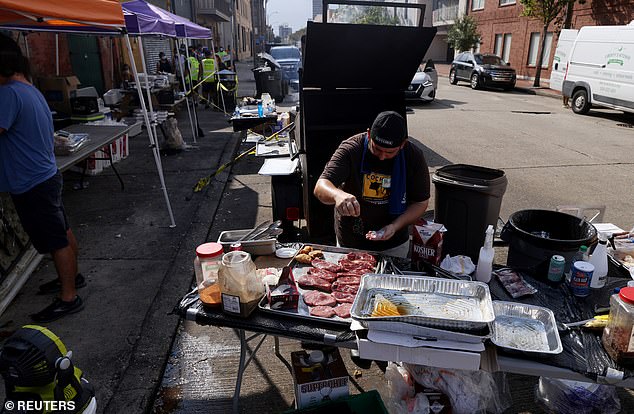 Michael DiSimone, CEO of the Link Restaurant Group prepares meat to be barbecued to give to people for free as power continues to be out in most of the city after hurricane Ida ripped through the state in New Orleans, Louisiana, U.S., September 1, 2021 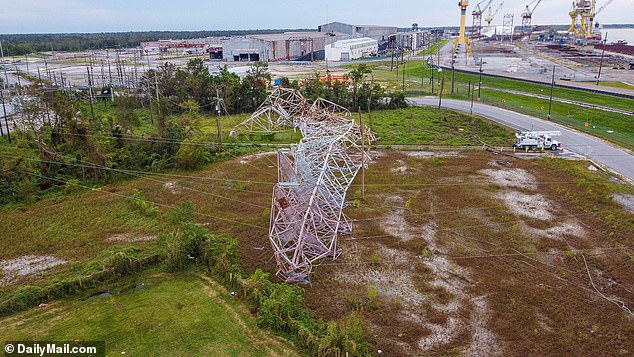 An official in Jefferson Parish says a transmission tower that provides power for New Orleans and the east bank of the parish has collapsed into the river near Bridge City. According to the parish’s Emergency Management Director, cables strung across the Mississippi River

‘Governor Edwards encouraged me to come and assured me that the visit will not disrupt recovery efforts on the ground. That’s what I wanted to be sure of,’ said Biden – who appears to be skipping hard hit communities in southern Louisiana where people are still digging out and assessing massive damage.

He ran into difficulties when he flew to Surfside Florida to view damage there earlier this summer after the tragic Champlain Towers South collapse. There was a shift on the rubble while Biden was at a hotel several blocks away, and the president visited a memorial wall rather than the disaster site itself.

During that visit, Biden met with local leaders including Florida Republican Gov. Ron DeSantis, his counterpart in a coronavirus feud.

“We’re not going anywhere. Tell me what you need,’ he told the assembled leaders, including DeSantis, who praised federal efforts.

Banquet hall explodes in Manville, New Jersey, one of many fires unreachable due to flooding