President Biden has warned his Ukrainian counterpart that he has just weeks to prepare for a Russian invasion after Washington dismissed Moscow’s main security demands.

Biden shared a phone call with Volodymyr Zelensky Thursday night, during which he warned the Ukrainian leader of the ‘distinct possibility’ that Vladimir Putin will attack his country in February.

This would mean the invasion is timed to coincide with the coldest weeks in eastern Europe, when the ground will be frozen solid allowing tanks and artillery to manoeuvre easily. US officials have previously said that an unseasonably mild winter appears to have delayed Putin’s attack plans by turning the region into a quagmire.

Separately, a senior British intelligence official warned that Putin is likely to launch an attack on Kiev from Belarus in the north using war games set to take place there next month as cover.

The official, speaking to The Times, said this could coincide with an amphibious assault from Crimea on the southern port city of Odessa using transport ships seen sailing around Europe last week in an effort to split the Ukrainian military across two fronts, hundreds of miles apart.

Tens of thousands of troops could then move in from the east, potentially with the aim of capturing the entire country. While Russia’s current troop numbers at the border are insufficient for this operation, the official said, Putin could mass a force large enough to get the job done in ‘two to three weeks’.

Russia is thought to have between 100,000 and 120,000 troops currently massed at the border, which have been recently reinforced with medical teams and logistical support of the kind that is needed to sustain an invading force. Tens of thousands more troops could arrive in the coming weeks, the official said.

‘Some estimates are another 60,000 will come, if not greater than that. It’s certainly not just a negotiating tactic or an idle threat when you deploy this many troops with this capability,’ they said. 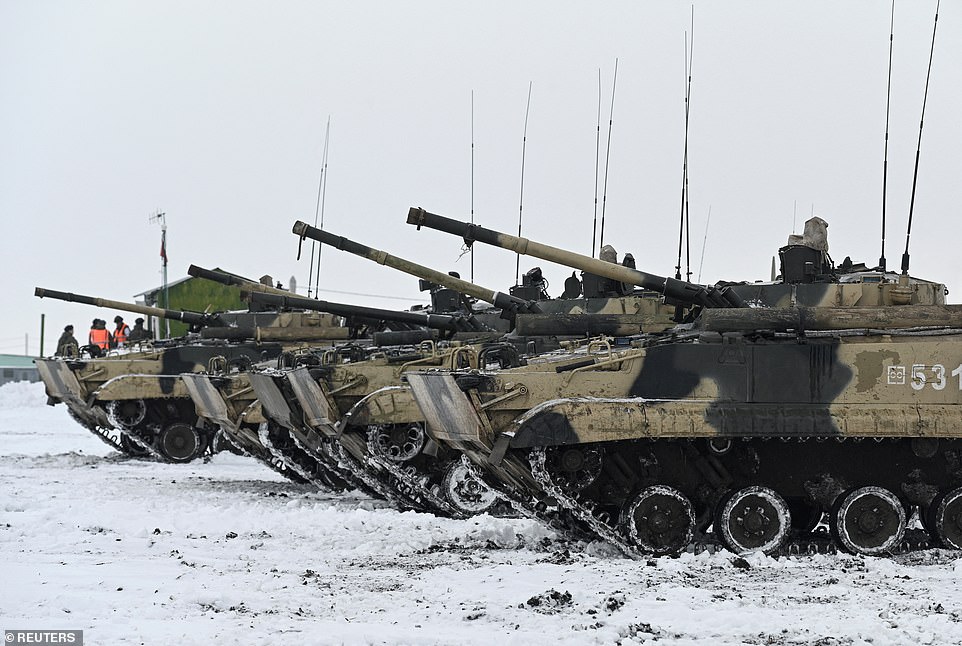 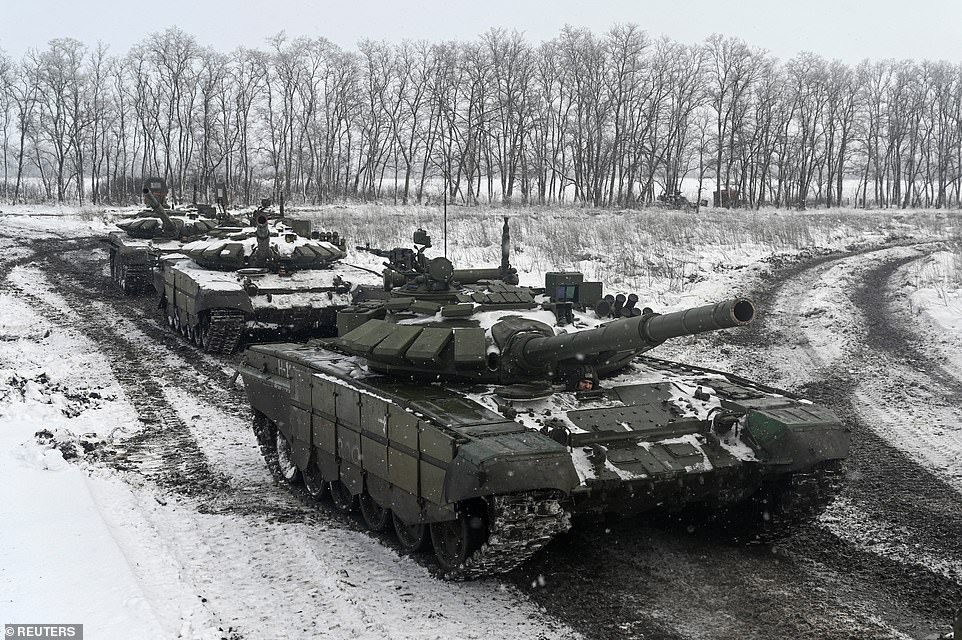 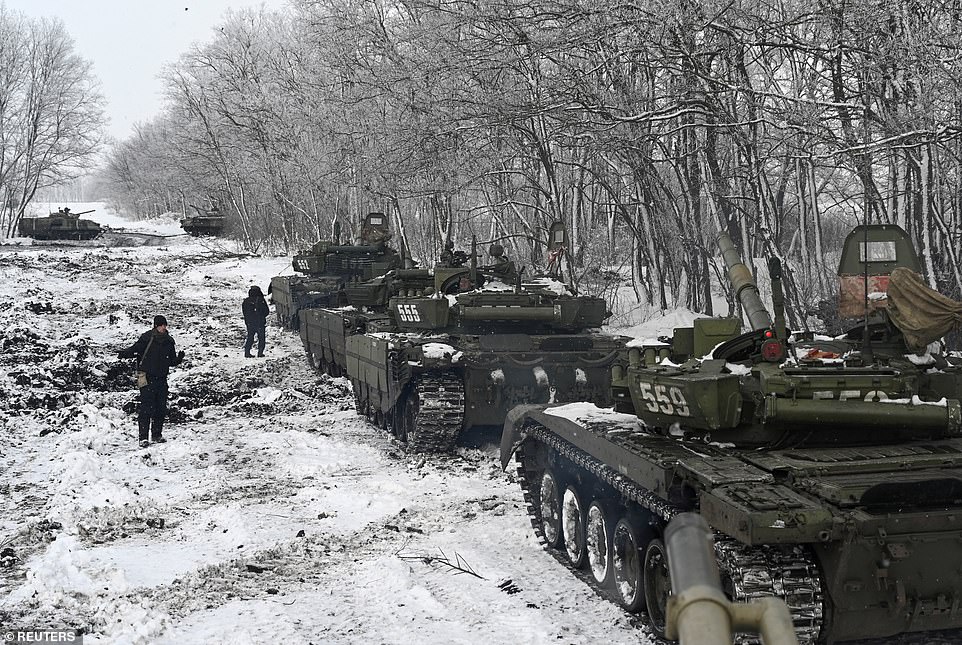 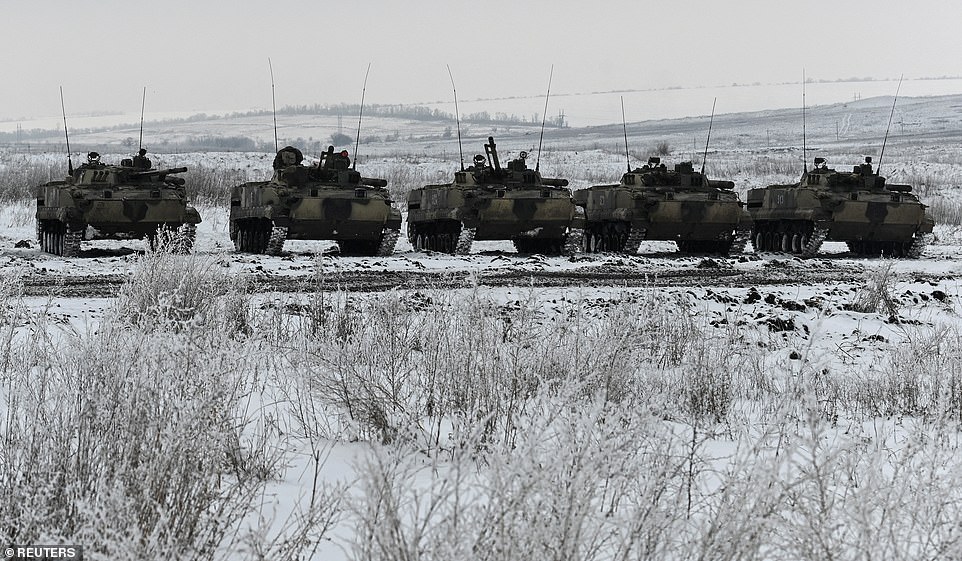 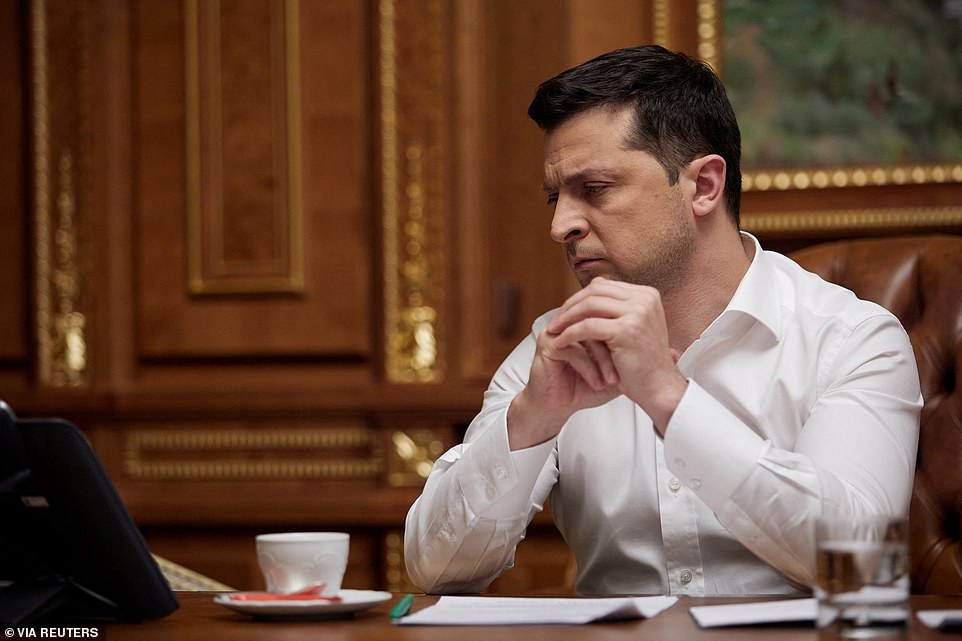 The warnings were issued a day after two letters were sent to Vladimir Putin, rejecting his demands that Ukraine be banned from joining NATO and that the alliance withdraw all its forces from ex-Soviet states.

US Secretary of State Antony Blinken sent one letter, while the other was sent by NATO chief Jens Stoltenburg. Neither missive has been made public, but both men have said no ground was given on Putin’s key demands. Instead, Blinken said ‘serious’ counter-offers were made that he hopes will tempt the Kremlin into continuing talks.

Dmitry Peskov, Putin’s spokesman, said yesterday that there is ‘little ground for optimism’ after reading the letters – but left the door to more talks open and said Russia will not rush to give a response.

Tensions have soared in recent weeks, as the United States and its NATO allies expressed concern that a buildup of about 100,000 Russian troops near Ukraine signaled that Moscow planned to invade its ex-Soviet neighbor.

Russia denies having any such designs – and has laid out a series of demands it says will improve security in Europe.

But as expected, the U.S. and the Western alliance firmly rejected any concessions on Moscow’s main points Wednesday, refusing to permanently ban Ukraine from joining NATO and saying allied deployments of troops and military equipment in Eastern Europe are nonnegotiable.

The U.S. did outline areas in which some of Russia’s concerns might be addressed, possibly offering a path to de-escalation.

But, as it has done repeatedly for the past several weeks, Washington also warned Moscow of devastating sanctions if it invades Ukraine.

In addition to penalties targeting Russian people and key economic sectors, several senior U.S. officials said Thursday with certainty that Germany would not allow a newly constructed gas pipeline to begin operations in the event of an incursion.

All eyes are now on Putin, who will decide how Russia will respond amid fears that Europe could again be plunged into war.

In the meantime, Biden spoke to his Ukrainian counterpart Zelenskyy on Thursday to reiterate American and allied support, including recent deliveries of U.S. military aid.

Biden warned Zelenskyy that the U.S. believed there was a high degree of likelihood that Russia could invade when the ground freezes and Russian forces could attack Ukrainian territory from north of Kyiv, according to two people familiar with the conversation who were not authorized to comment publicly. 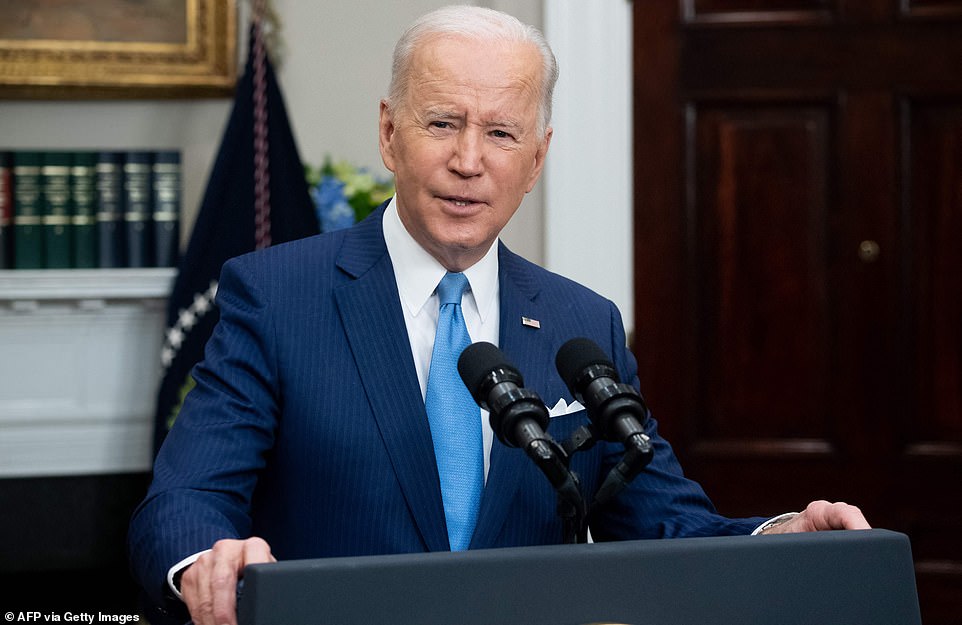 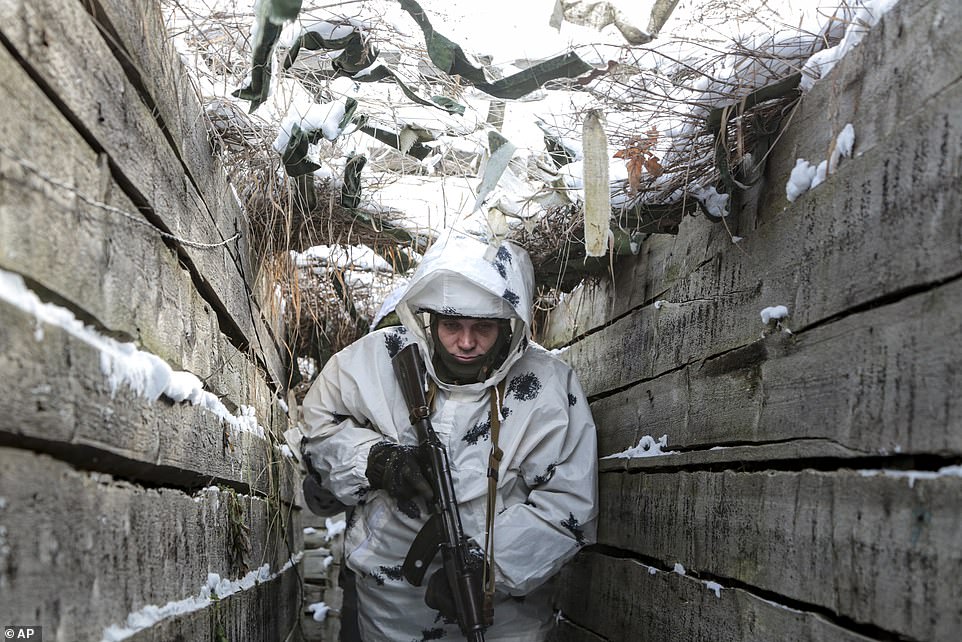 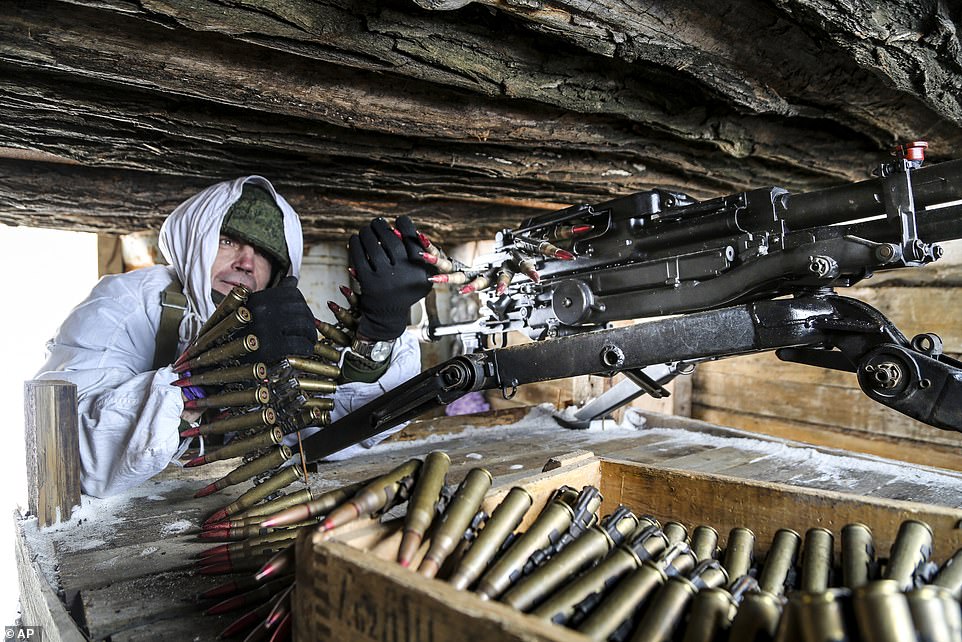 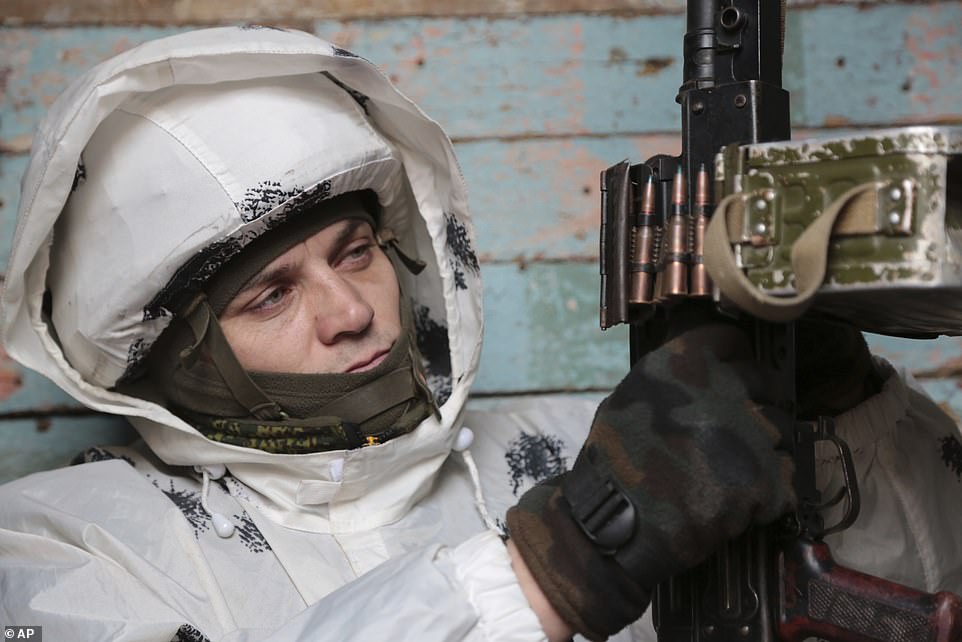 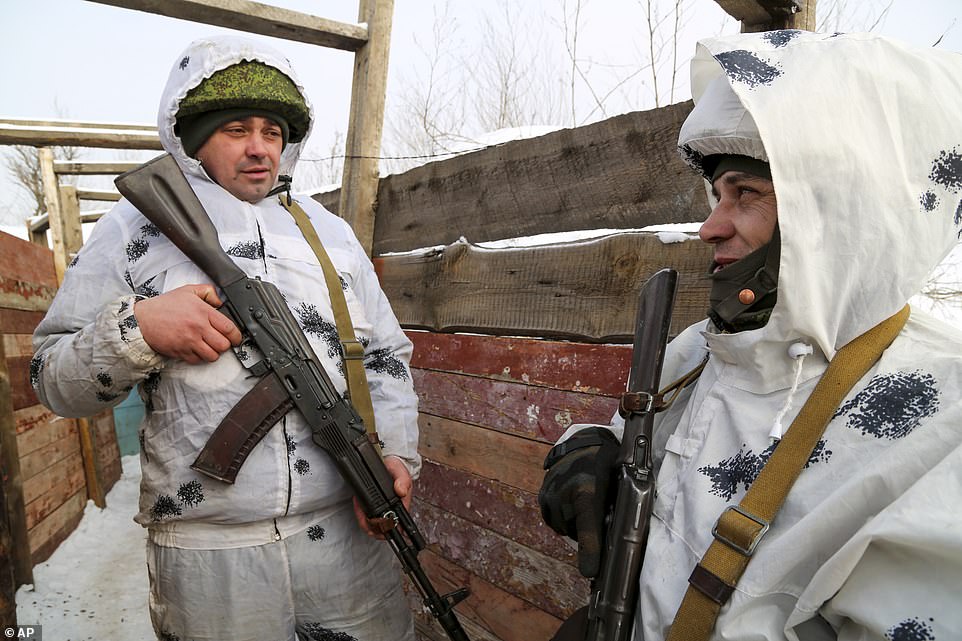 Military experts have said Russia may be waiting for optimal ground conditions to move heavy equipment into Kyiv as part of any invasion. Eight years ago, Russia invaded Ukraine’s Crimean Peninsula in late February.

Zelenskyy tweeted that he and Biden also discussed the possibility of additional financial support for Ukraine.

The White House said Biden told Zelenskyy he was ‘exploring additional macroeconomic support to help Ukraine’s economy’ as it comes under pressure as a result of Russia’s military buildup.

Meanwhile, the United States announced that the U.N. Security Council will hold an open meeting Monday on what U.S. Ambassador Linda Thomas-Greenfield called Russia’s ‘threatening behavior.’ She said the deployment of more than 100,000 troops along Ukraine’s border and other destabilizing acts pose ‘a clear threat to international peace and security and the U.N. Charter.’

Kremlin spokesman Dmitry Peskov told reporters earlier that the response from the U.S. – and a similar one from NATO – left ‘little ground for optimism.’ But he added that ‘there always are prospects for continuing a dialogue, it’s in the interests of both us and the Americans.’

White House press secretary Jen Psaki was circumspect when asked whether the Biden administration saw a sliver of hope in that the Russians said they would keep communications open even as they said that they lacked optimism..

‘We don’t know if the Russians are playing games on diplomacy. We hope not,’ Psaki said.

Foreign Minister Sergey Lavrov said the U.S. response contained some elements that could lead to ‘the start of a serious talk on secondary issues,’ but emphasized that ‘the document contains no positive response on the main issue.’ Those are Moscow’s demands that NATO not expand and that the alliance refrain from deploying weapons that might threaten Russia.

The evasive official comments reflect the fact that it is Putin who will single-handedly determine Russia’s next moves. He has warned of unspecified ‘military-technical measures’ if the West refuses to heed the demands.

Peskov added that Putin and Biden will decide whether they need to have another conversation following two calls last month.

Ukraine’s Foreign Minister Dmytro Kuleba said Kyiv had seen the U.S. response before it was delivered to Russia and had no objections. He tweeted it was ‘important that the U.S. remains in close contact with Ukraine before and after all contacts with Russia.’ 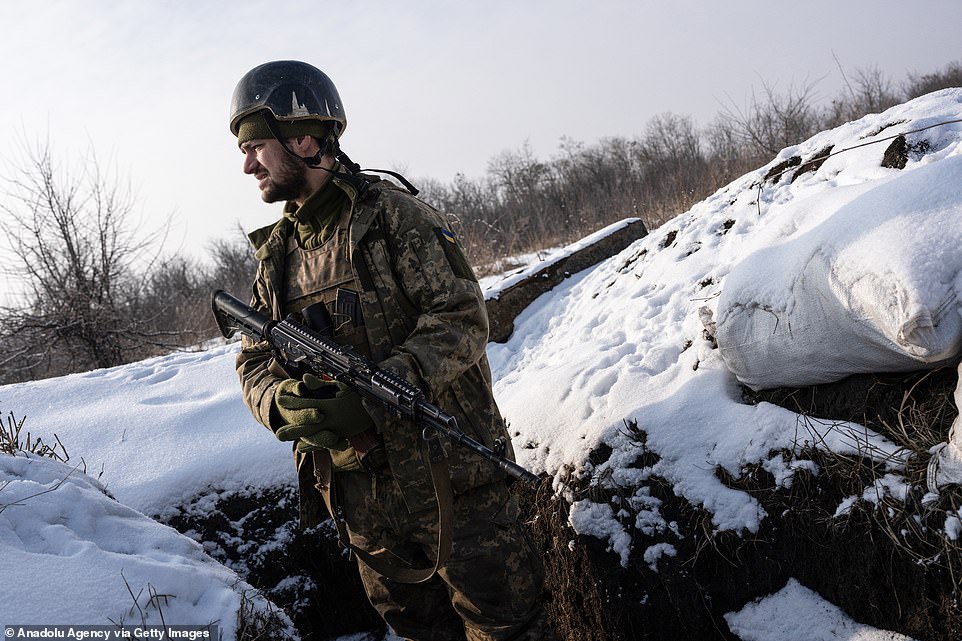 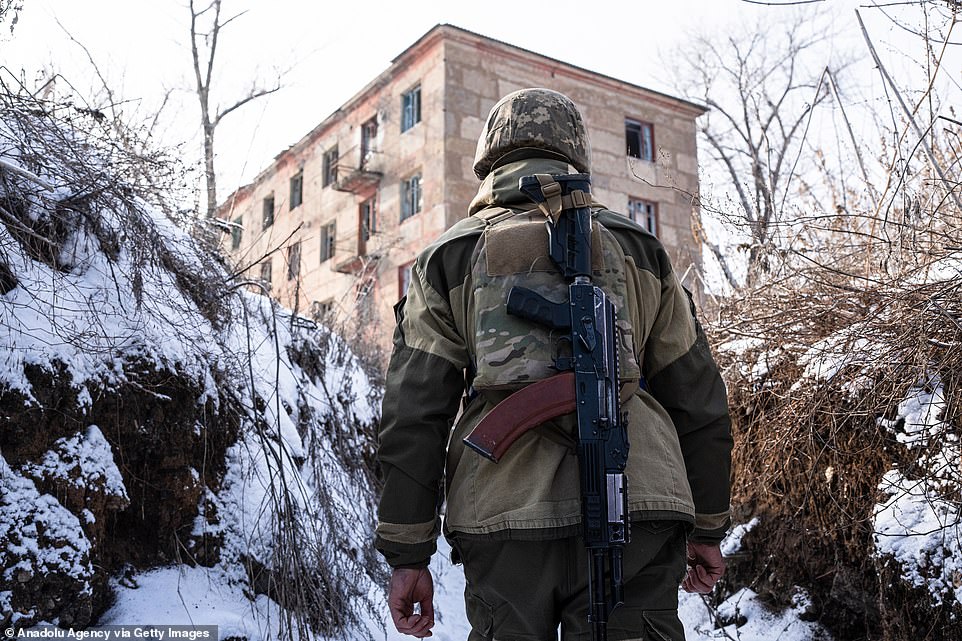 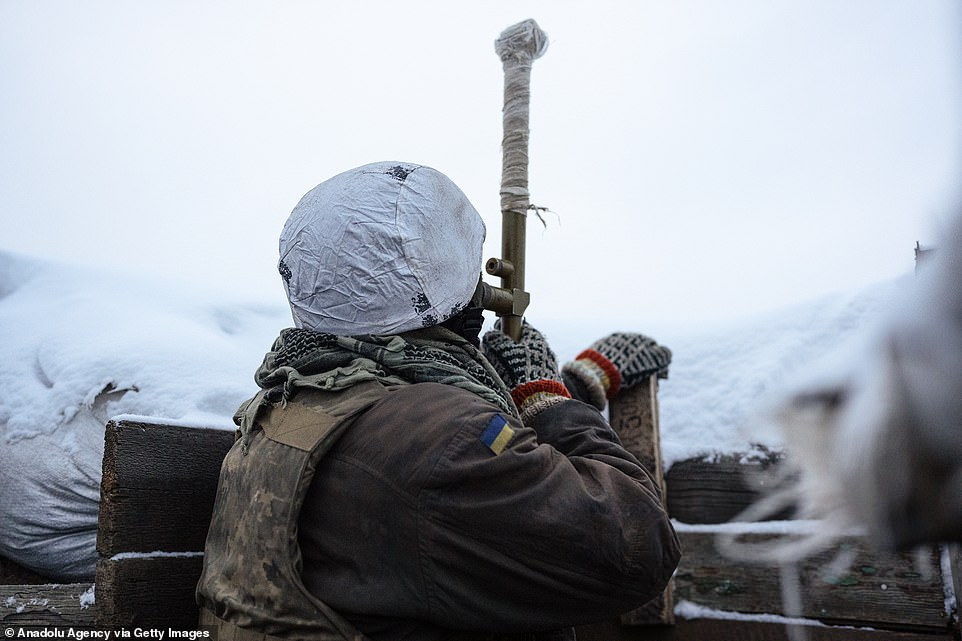 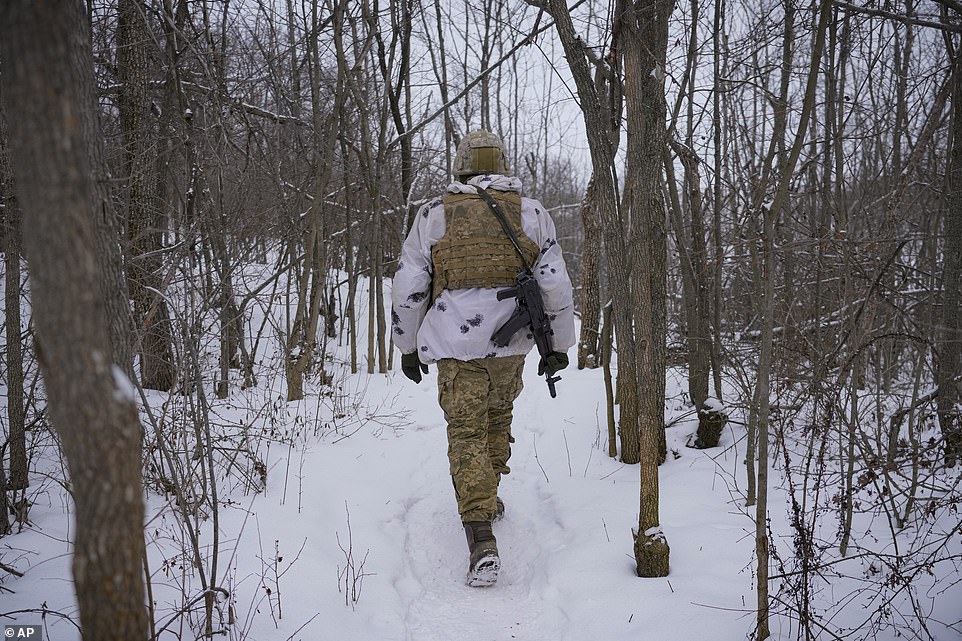 On a visit to Denmark, Kuleba emphasized his country’s need to strengthen its defenses.

Germany’s Foreign Minister Annalena Baerbock said during a parliamentary debate on Ukraine that her government is closely coordinating its policy with allies, considering a range of options that could include the new Nord Stream 2 Russian gas pipeline to Germany.

While the diplomacy sputters on, so too do maneuvers that have escalated tensions. Russia has launched a series of military drills involving motorized infantry and artillery units in southwestern Russia, warplanes in Kaliningrad on the Baltic Sea, dozens of warships in the Black Sea and the Arctic, and Russian fighter jets and paratroopers in Belarus.

NATO said it was bolstering its deterrence in the Baltic Sea region, and the U.S. ordered 8,500 troops on higher alert for potential deployment to Europe.

As war fears mounted, thousands of Ukrainians expressed their resolve to stand up to the Russian pressure under the hashtag (hash)UkrainiansWillResist on Twitter and Facebook.

‘No one will force Ukrainians to accept the Kremlin ultimatum,’ wrote Andrii Levus, who initiated the campaign.

Ukraine’s Interior Ministry has organized training on acting in emergency situations, with an emphasis on dealing with explosives.

Beyond concerns about a possible Russian offensive in Ukraine, there also has been speculation that Moscow’s response could include military deployments to the Western Hemisphere.

While a senior Russian diplomat recently refused to rule out such deployments to Cuba and Venezuela, a top Putin associate expressed skepticism Thursday at that prospect. 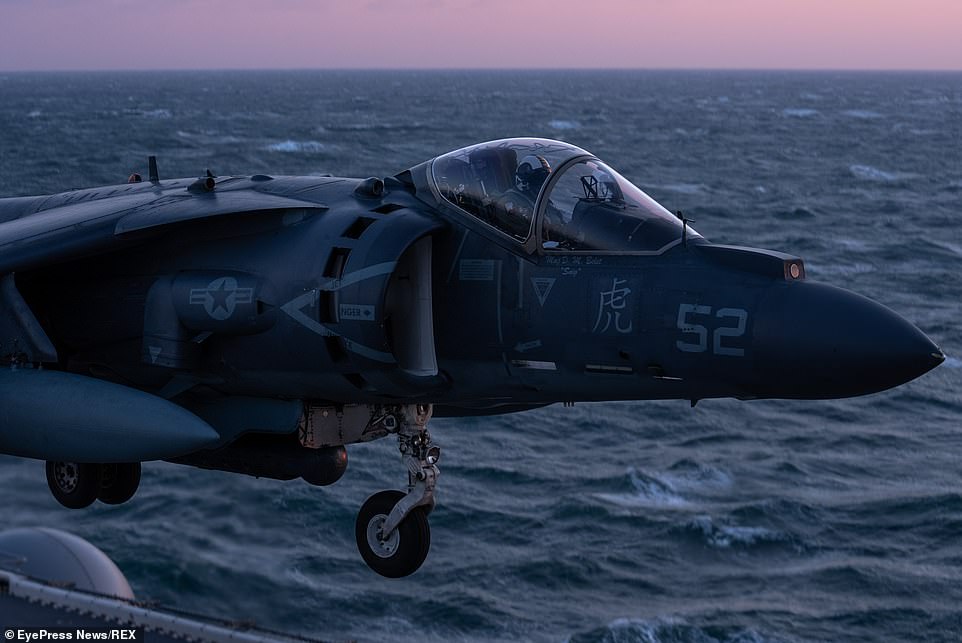 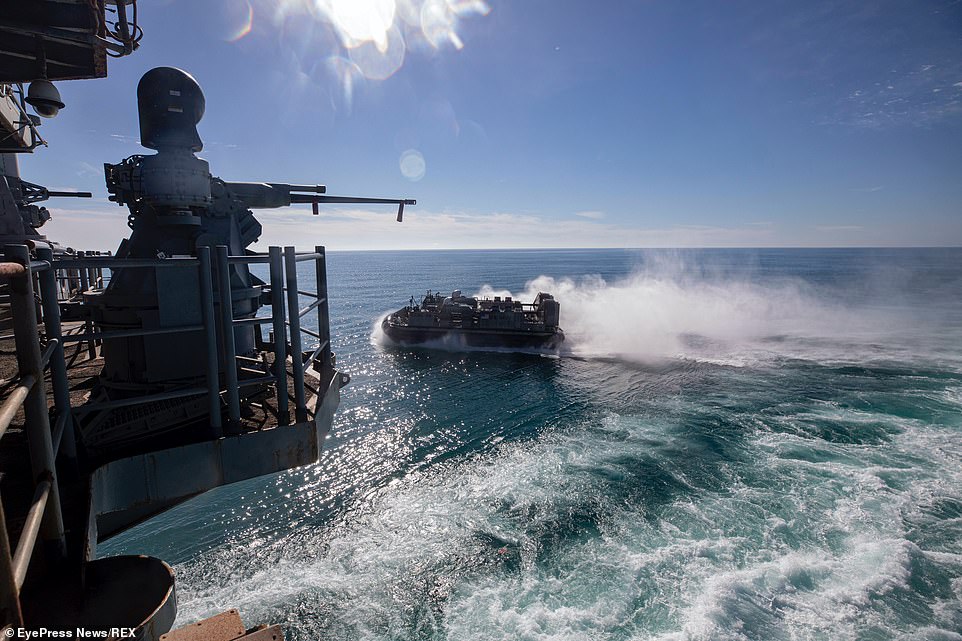 ‘Cuba and Venezuela are aiming to come out of isolation and restore normal relations with the U.S. to a certain extent, so there can’t be any talk about setting up a base there as happened during the Soviet times,’ Dmitry Medvedev, a deputy head of Russia’s Security Council, told Russian media.

While he charged that the West is using Ukraine as a way to contain Russia, he somberly acknowledged that a Russia-NATO conflict ‘would be the most dramatic and simply catastrophic scenario, and I hope it will never happen.’

While concerns about a possible Russian attack linger, a separatist conflict simmers in Ukraine. Following the 2014 ouster of a Kremlin-friendly president in Kyiv, Moscow annexed Ukraine’s Crimean Peninsula and backed an insurgency in the country’s eastern industrial heartland.

Fighting between Ukrainian forces and Russia-backed rebels has killed over 14,000 people, and efforts to reach a settlement have stalled.

Since the conflict began, Russia has been accused of sending troops and weapons to the separatists, something it has denied.

On Thursday, Peskov wouldn’t comment on a proposal from the Kremlin’s main political party, United Russia, which suggested that Moscow respond to the delivery of Western weapons to Ukraine by sending arms to the rebels.

He added that Putin is aware of the proposal but had no immediate reaction.