President Joseph Biden will travel to Poland on Friday to discuss the international response to ‘the humanitarian and human rights crisis that Russia’s unjustified and unprovoked war on Ukraine has created,’ White House spokeswoman Jen Psaki said late Sunday.

Biden’s trip to Warsaw will come a day after he meets in Brussels with NATO Allies, G7 Leaders and European Union Leaders to discuss international efforts to support Ukraine as Russian forces continue to pummel their neighbor.

In Poland, Biden will hold a bilateral meeting with Polish President Andrzej Duda. However, Biden will not visit Ukraine during his trip to Europe, Psaki said earlier Sunday after officials in Kyiv issued an open invitation to the president.

More than 2 million refugees have entered Poland from Ukraine since the start of the Russian invasion on Feb. 24, the Polish border guard said on Friday.

The White House also said Biden will host a call Monday at 11 a.m. EST with President Emmanuel Macron of France, Chancellor Olaf Scholz of Germany, Prime Minister Mario Draghi of Italy and Prime Minister Boris Johnson of the United Kingdom to discuss their coordinated responses to Russia’s invasion of Ukraine.

United Nations data showed as of Thursday about 3.2 million have fled abroad from Ukraine since last month, in what has become Europe’s fastest growing refugee crisis since World War Two. 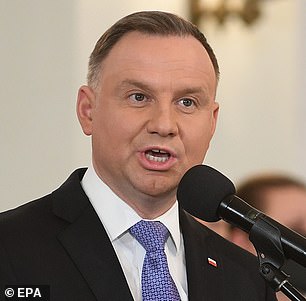 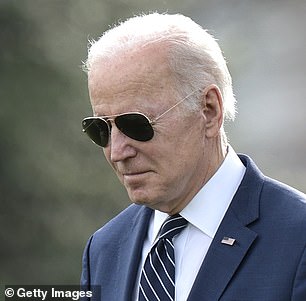 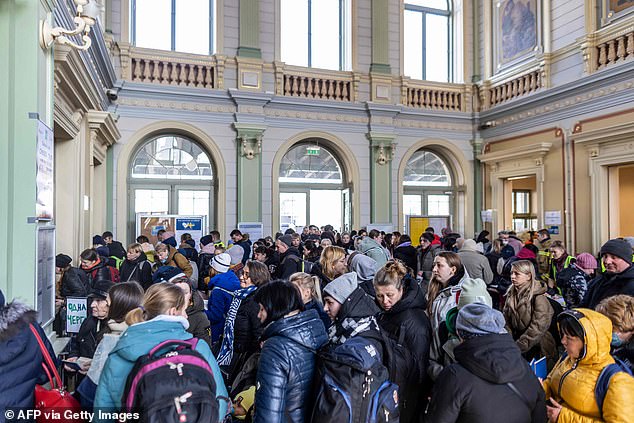 Refugees from Ukraine are seen standing in line for free train tickets in the hall of the main railway station in Przemysl, southeastern Poland, on Sunday. Ten million people – more than a quarter of the population – have now fled their homes in Ukraine since Russia’s invasion on February 24, the United Nations refugees chief said 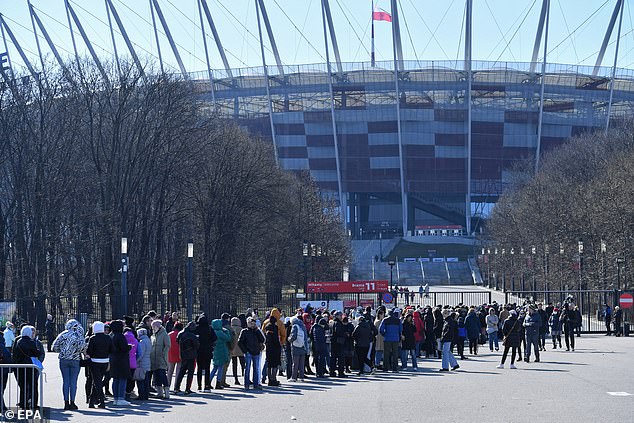 The UN said some of the 2 million people entering Poland from Ukraine have moved on to other countries in the EU but the ‘the majority are believed to be still in Poland.’

On Thursday, Biden will attend an emergency NATO Summit on Ukraine as well as a G7 meeting. He will also join a scheduled European Council Summit to discuss Ukraine “including transatlantic efforts to impose economic costs on Russia, provide humanitarian support to those affected by the violence, and address other challenges related to the conflict,” the White House said.

U.S. Ambassador to the United Nations Linda Thomas-Greenfield said earlier Sunday that a visit by Biden to war-ravaged Ukraine was ‘not on the table.’

‘This is a country at war. I can’t imagine that that would be on the table,’ Thomas-Greenfield told CNN’s State of the Union host Jake Tapper on Sunday morning when asked about Biden visiting Ukraine.

Ahead of the trip this week, Biden was pictured Sunday on a bike ride in Rehoboth Beach, Delaware, where he is visiting his vacation home for the weekend. 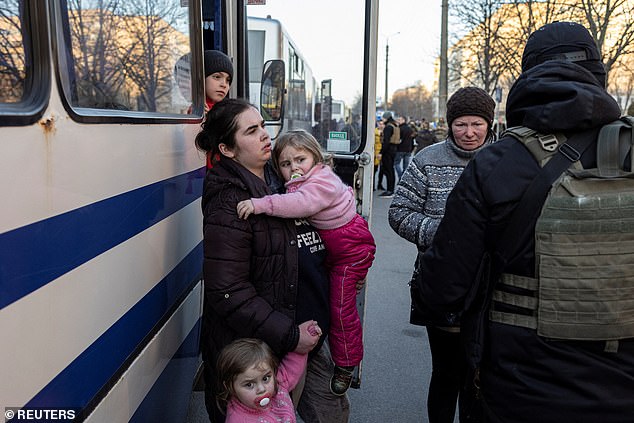 Evacuees from the villages occupied by Russian soldiers arrive in the town of Brovary, near Kyiv, on Sunday 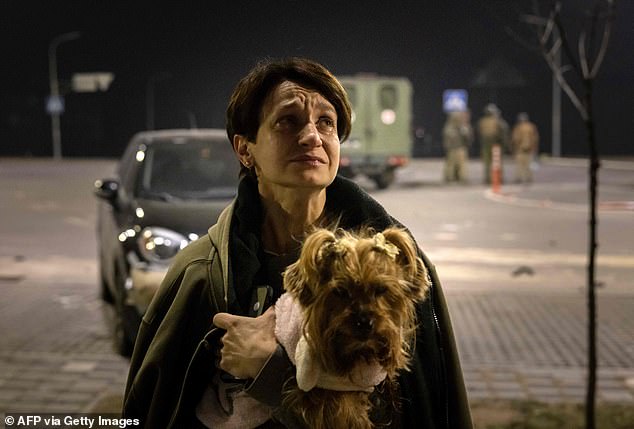 A resident, carrying her dog, leaves her apartment after a warehouse was hit by debris from a downed rocket in Kyiv on Sunday 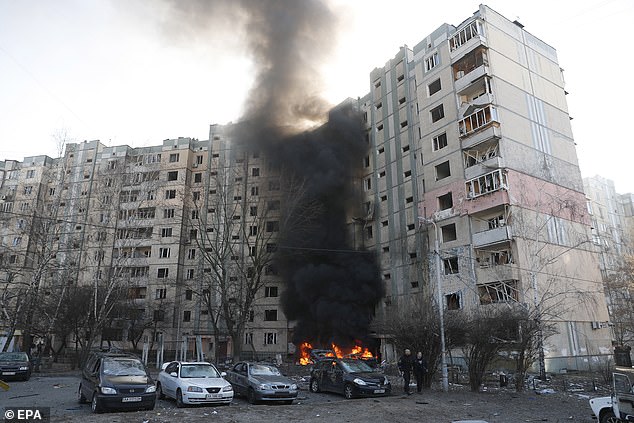 Ukraine is experiencing its 25th day of attack from Russia with the United Nations saying 900 civilians have died since invasion on February 24. Pictured: Ukrainian firefighters and security teams response to a building hit by Russian missiles in Kyiv, Ukraine on Sunday March 20

Meanwhile, Ukraine was experiencing its 25th day of attack from Russia, which has seen seen the death of 900 civilians, according to the United Nations.

Local authorities in the besieged Ukrainian port city of Mariupol say that the Russian military bombed an art school where about 400 people had taken refuge – reducing the building to rubble, although there is no immediate word on casualties.

Authorities in Ukraine’s eastern city of Kharkiv say at least five civilians, including a nine-year-old boy, have been killed in the latest Russian shelling

Ukrainian President Volodymyr Zelensky’s chief diplomatic adviser Ihor Zhovka said Biden ‘should not be afraid’ to visit Kyiv ‘if you are brave’ enough.

The invitation comes as Biden plans to travel to Brussels for a North Atlantic Treaty Organization (NATO) summit this upcoming week. 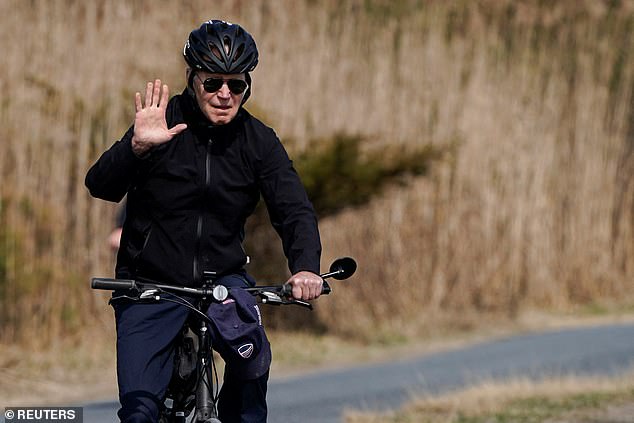 President Joe Biden is visiting Europe this week, but will not be making a stop in war-torn Ukraine despite invites from officials to survey the damage from war with Russia. Pictured: Biden takes a bike rid in Rehoboth Beach, Delaware on Sunday, March 20, 2022

Zhovka has requested that Biden facilitate Ukraine’s upcoming acquisition of U.S. weapons, which include fighter jets and missiles.

The adviser also slammed Ukraine’s allies, alleging Zelensky is ‘disappointed’ in the U.S. and NATO’s apparent rejection to fulfill the nation’s request to impose a no-fly zone over its airspace.

Biden, who has not publicly issued a decision on Zelensky’s request, was warned earlier this week that imposing the no-fly zone would be an ‘act of war’. It remains unclear how Biden will proceed. 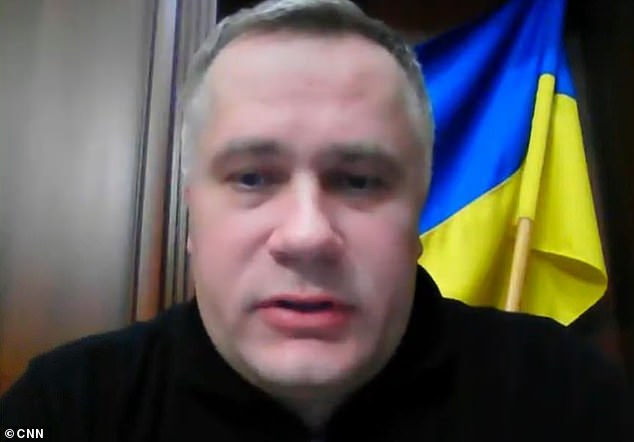 Ukrainian President Zelensky’s chief diplomatic adviser Ihor Zhovkva (pictured) invited Biden to visit Kyiv next week amid Russia’s ongoing invasion of the country, saying ‘one should not be afraid to – if you are brave’ 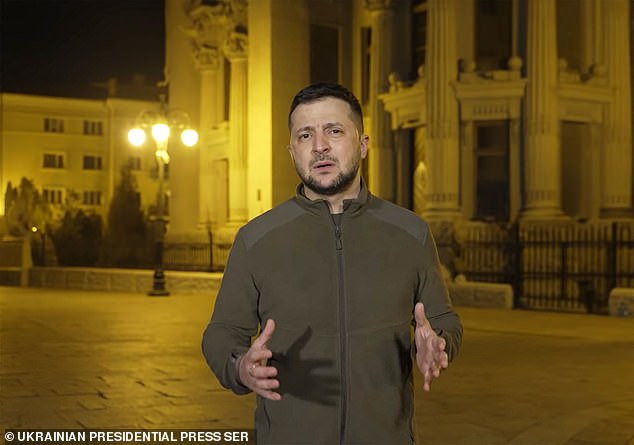 He explained that Zelenksy is ‘disappointed’ in the U.S. and NATO’s apparent rejection to fulfill Ukraine’s request to impose a no-fly zone over its airspace

Zhovka also noted how leaders of three other nations have visited Kyiv and met with Zelensky.

‘So why [doesn’t] President Biden come to Ukraine to meet with the president?’

When questioned about the danger of Biden traveling to Kyiv, Zhovka said: ‘Well, definitely it is dangerous when you have a war against my country, a war in Europe.’

It is unclear if Biden will accept Zhovka and Zelensky’s invitation, which comes as Ukraine is set to receive a new shipment of U.S. weapons within days, including javelin and stinger missiles.

‘The (weapons) will be on the territory of our country in the nearest future. We are talking about days,’ Ukraine’s National Security and Defense Council Secretary Oleksiy Danilov confirmed in a televised interview Saturday.

Ukraine’s allies have delivered planeloads of weapons shipments to bolster its military against the Russian invasion. Russia has criticized such deliveries from NATO member states.

Ukraine and the West claim that Russia’s invasion is floundering in part due to fierce Ukrainian resistance, poor planning and low morale among Russian forces.

According to one US intelligence estimate, 7,000 Russian troops, including four generals, have been killed since the Russian invasion on February 24 and between 14,000 and 21,000 troops have been injured in the fighting.

Moscow’s Defense Ministry says that less than 500 soldiers have been killed.

Ukraine’s military has also suffered heavy losses, likely to be much higher than the 1,300 troops which Kyiv has confirmed as killed.

According to Ukraine’s military, Russia has lost 466 tanks, 115 helicopters, 914 vehicles, 95 aircraft, 213 artillery systems, 44 anti-aircraft weapons and 60 fuel tanks. Russia has not responded to Kyiv’s latest estimates, and the information could not be independently verified.

The estimates come as Russia used its latest hypersonic missile for the first time during its attack on Ukraine, a military spokesman said.

The World Health Organisation said it has verified 43 attacks on hospitals and health facilities, with 12 people killed and 34 injured.

US Secretary of State, Antony Blinken, said on Thursday that American officials were evaluating potential war crimes and that if the intentional targeting of civilians by Russia is confirmed, there will be ‘massive consequences’.

She said many of the daily attacks battering Ukrainian cities ‘are reportedly indiscriminate’ and involve the use of ‘explosive weapons with a wide impact area’. DiCarlo said the devastation in Mariupol and Kharkiv ‘raises grave fears about the fate of millions of residents of Kyiv and other cities facing intensifying attacks’.

Hundreds of civilians were said to have taken shelter in a grand, columned theatre in the city’s centre when it was hit on Wednesday by a Russian airstrike. On Friday, their fate was still uncertain, with conflicting reports on whether anyone had emerged from the rubble.

Officials say communications are disrupted across the city and movement is difficult because of shelling and fighting.