Before-and-after satellite images have revealed the devastation caused to a Syrian militia compound by the first military action of President Biden’s administration.

The US dropped seven 500lbs bombs on the site – which was used by two Iranian-backed Shia militia groups – killing an estimated 22 fighters.

Images taken before the blast shows the large compound – located around 370 yards from the Iraqi border – with around a dozen buildings inside it.

But after Thursday’s attack all the buildings have been obliterated and there is a sea of blackened dirt and debris spreading into the surrounding desert.

Despite the devastating scene, Pentagon sources told CCN the attack was ‘the more restrained option’ which they took to ‘draw a line’ with the Iranians after smuggled weapons injured American troops and killed a contractor. 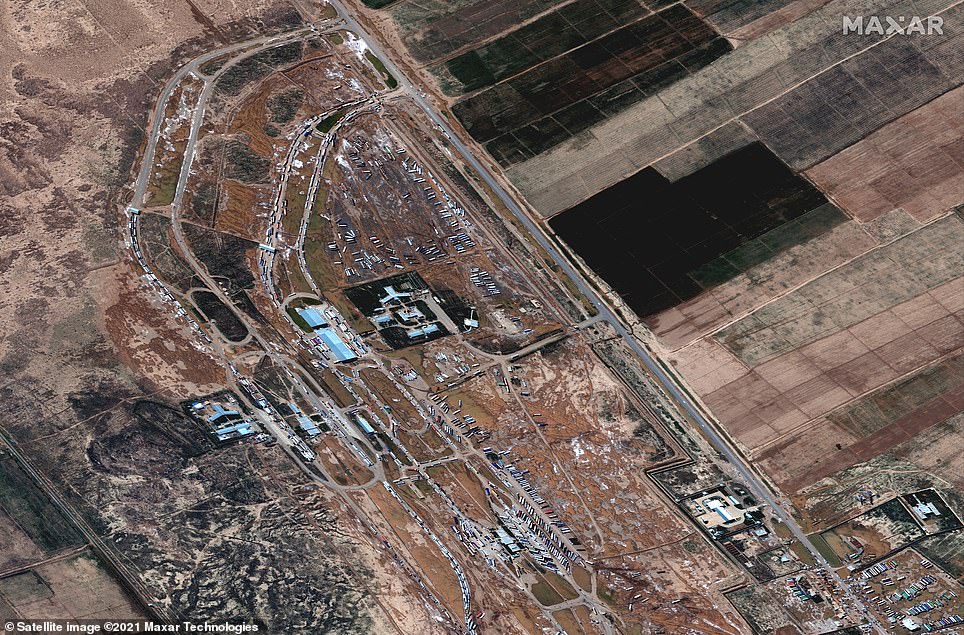 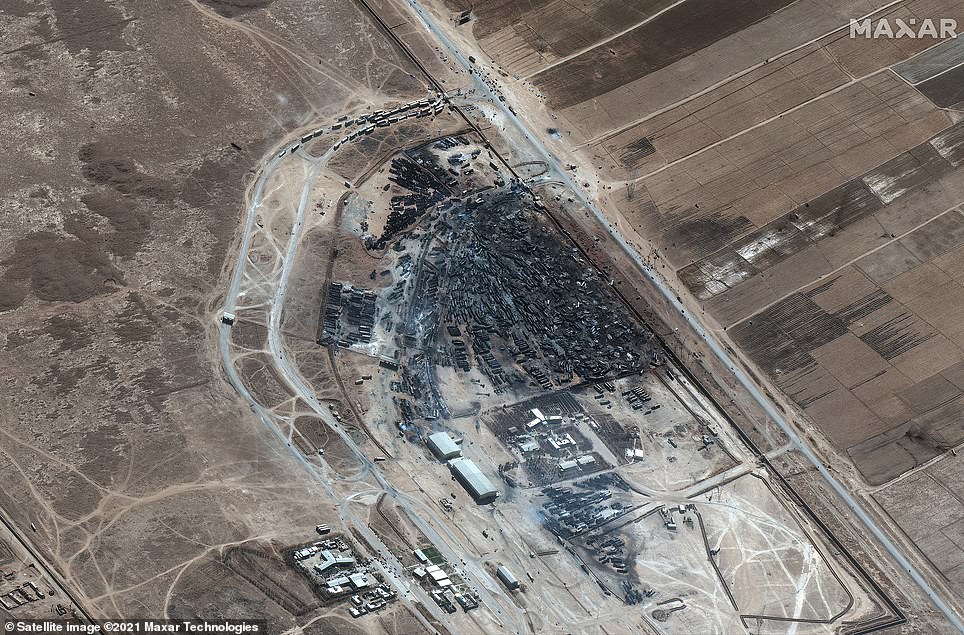 The US dropped seven 500lbs bombs on the site – which was used by two Iranian-backed Shia militia groups – killing an estimated 22 fighters. Pictured are before-and-after images of the compound 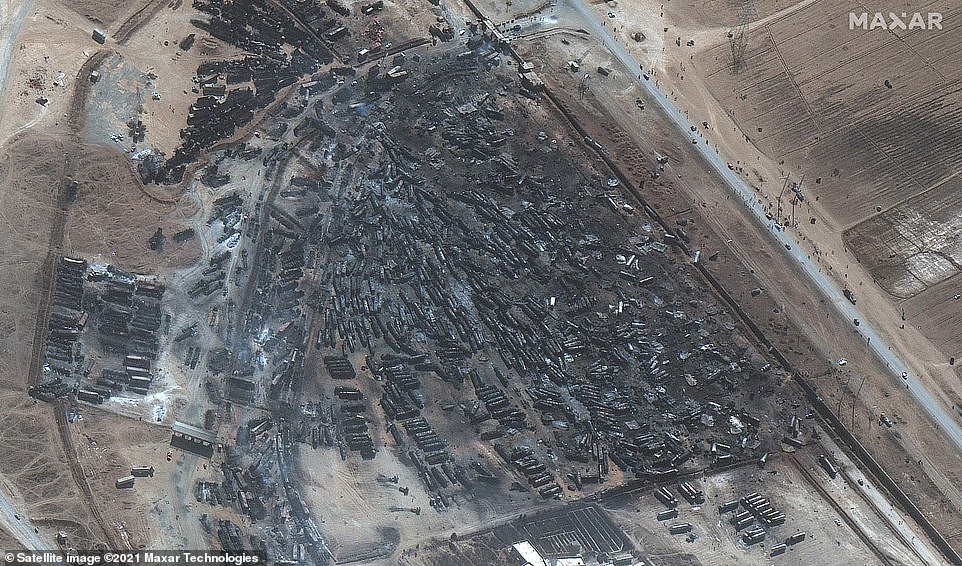 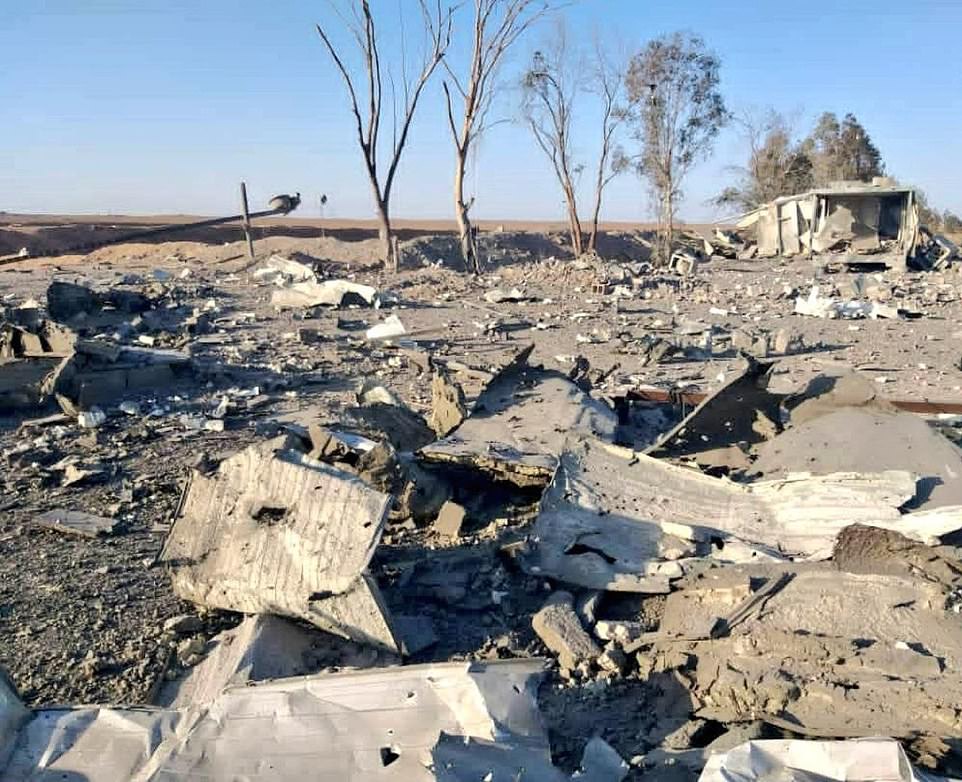 Despite the devastating scene, Pentagon sources told CCN the attack was ‘the more restrained option’ which they took to ‘draw a line’ with the Iranians. Pictured is damage on the ground 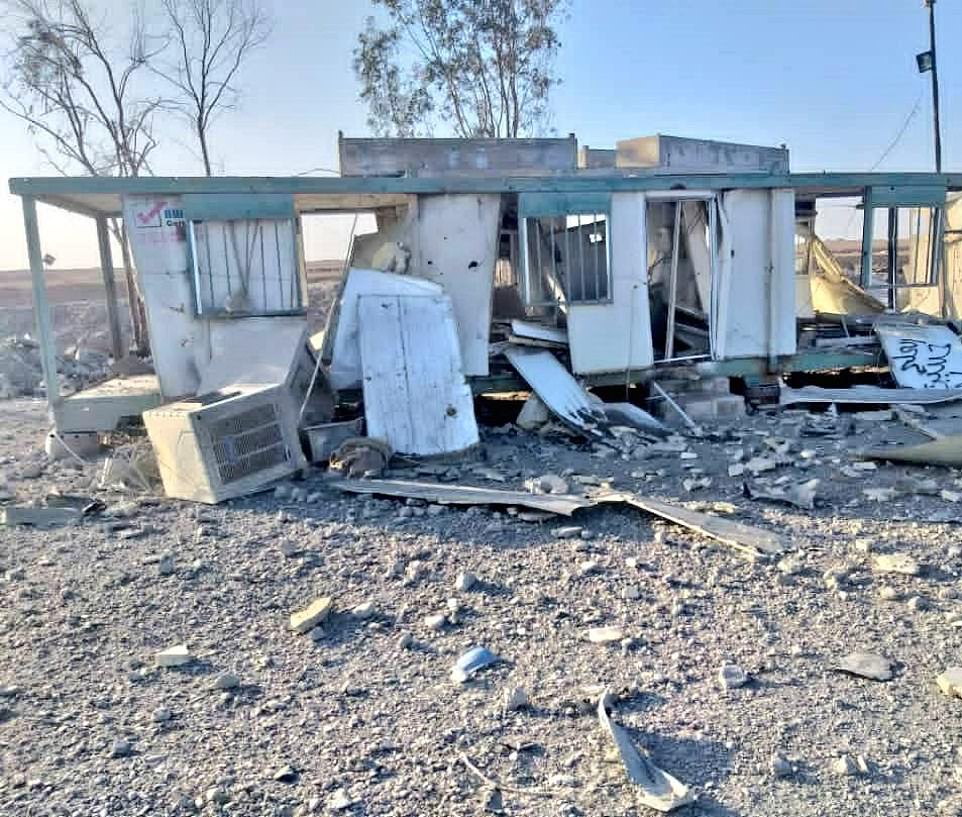 The airstrike was the first military action undertaken by the Biden administration, after repeated tensions between Iran and the Trump White House over the previous four years which reached a peak following Qassem Soleimani’s killing in early 2020

The Pentagon said Thursday’s strikes targeted the Shi’a militants who carried out a February 15 rocket attack in Iraq that killed a civilian contractor and wounded a US service member.

The group also declared that US troops would remain targets until they leave Iraq, according to extremism expert Rita Katz.

Little is known about the group, but some regional experts fear it may be a front for one of Iraq’s larger Shi’a militias.

Katz has warned that the number of Shi’a factions in Iraq is ‘multiplying’.

The February 15 attack came after NATO announced it would scale up its mission in Iraq from 500 personnel to 4,000 to fight the remnants of ISIS.

The compound at Al Bukamal had been used by the groups to ferry weapons across the border, according to the Pentagon.

The airstrike was the first military action undertaken by the Biden administration, after repeated tensions between Iran and the Trump White House over the previous four years which reached a peak following Qassem Soleimani’s killing in early 2020.

While the strike could be the first retaliatory move by the United States following last week’s attacks, it was said to be limited in scope, potentially lowering the risk of escalation.

Also a decision to strike only in Syria and not in Iraq would give the Iraqi government some breathing room as it carries out its own investigation of a February 15 attack that wounded Americans.

The officials, speaking on the condition of anonymity, said the strike was directly approved by President Biden.

In announcing the strikes, John Kirby, the Pentagon’s chief spokesman, said: ‘This proportionate military response was conducted together with diplomatic measures, including consultation with coalition partners.’

‘The operation sends an unambiguous message: President Biden will act to protect American and coalition personnel. At the same time, we have acted in a deliberate manner that aims to deescalate the overall situation in eastern Syria and Iraq.’

Retaliatory US military strikes have occurred a number of times in the past few years.

The rocket attacks against US positions in Iraq were carried out as Washington and Tehran are looking for a way to return to the 2015 nuclear deal abandoned by former president Donald Trump. 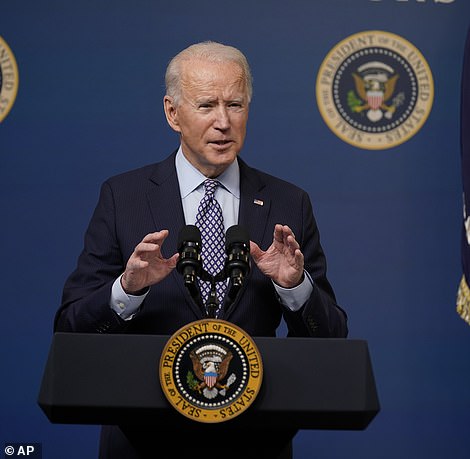 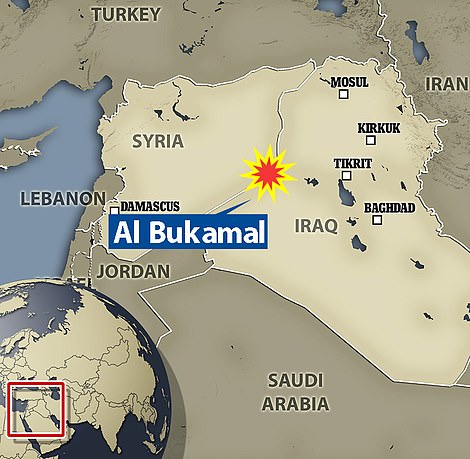 President Joe Biden (left) personally authorized the strike. Pictured is a map showing the location of the compound on the Syria-Iraq border 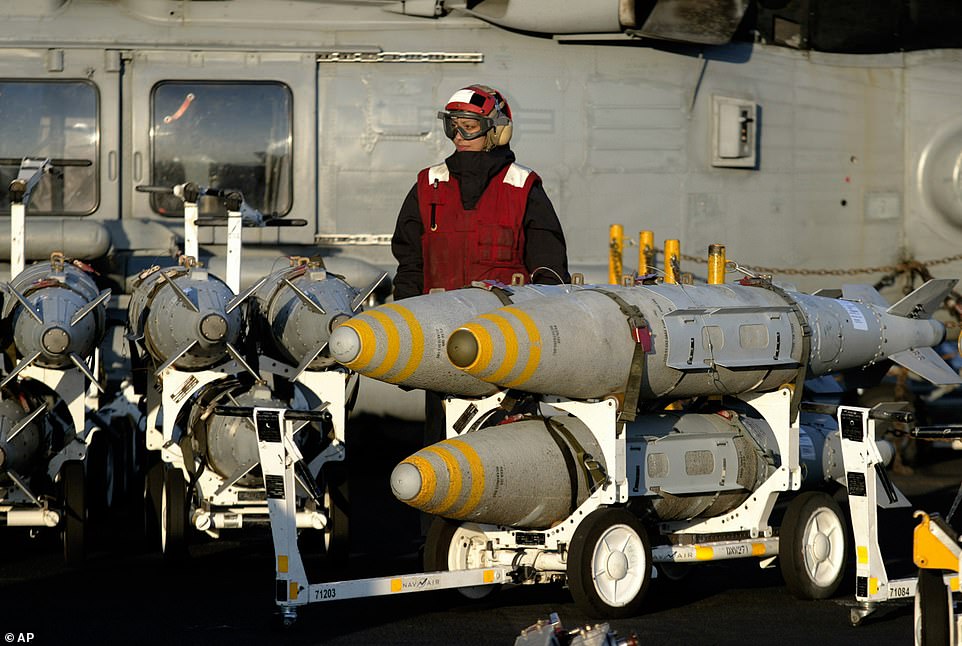 Biden administration officials condemned the February 15 rocket attack near the city of Irbil in Iraq’s semi-autonomous Kurdish-run region, but as recently as this week officials indicated they had not determined for certain who carried it out.

Officials have noted that in the past, Iranian-backed Shiite militia groups have been responsible for numerous rocket attacks that targeted US personnel or facilities in Iraq.

Kirby, the Pentagon spokesman, had said Tuesday that Iraq is in charge of investigating the February 15 attack.

‘Right now, we’re not able to give you a certain attribution as to who was behind these attacks, what groups, and I’m not going to get into the tactical details of every bit of weaponry used here,’ Kirby said.

‘Let’s let the investigations complete and conclude, and then when we have more to say, we will.’ 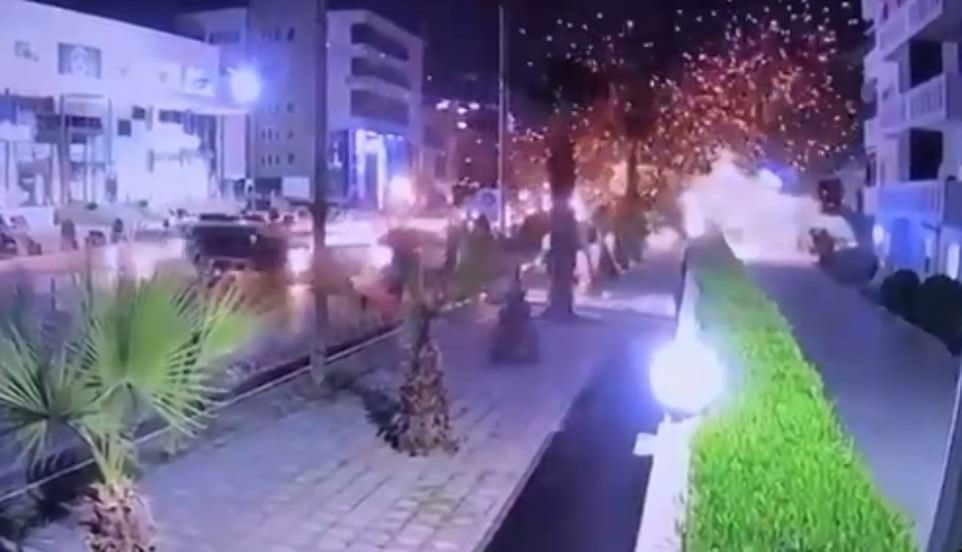 Video shows red hot shrapnel and smoke filling the air after a rocket landed in the middle of a street in Erbil on February 15. As well as the US contractors wounded and the foreign contractor killed, five Iraqi civilians were wounded in the attack 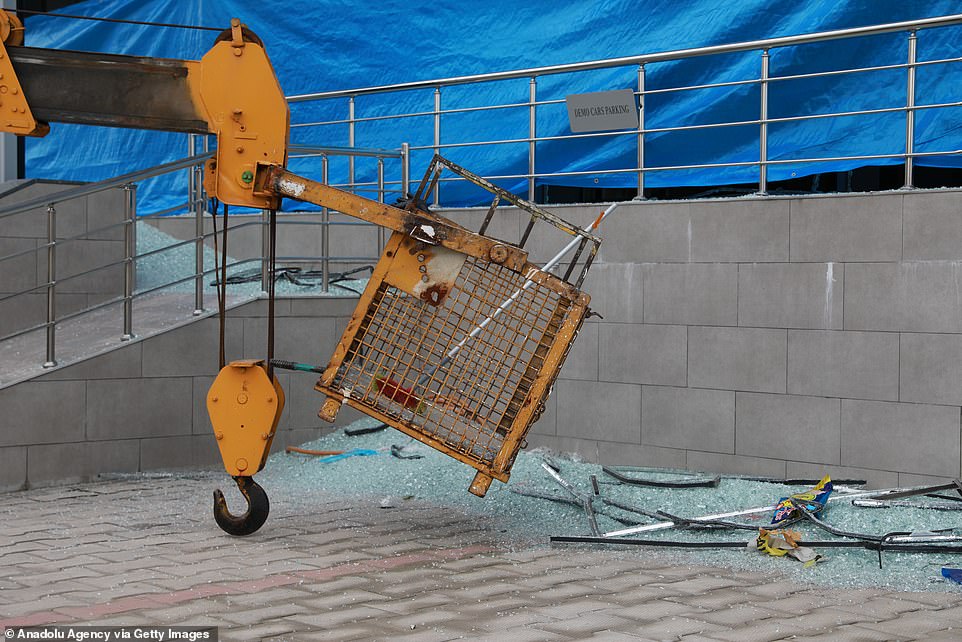 A view of the scene after a rocket attack outside the international airport in Erbil, the capital of northern Iraq’s Kurdish region on February 16 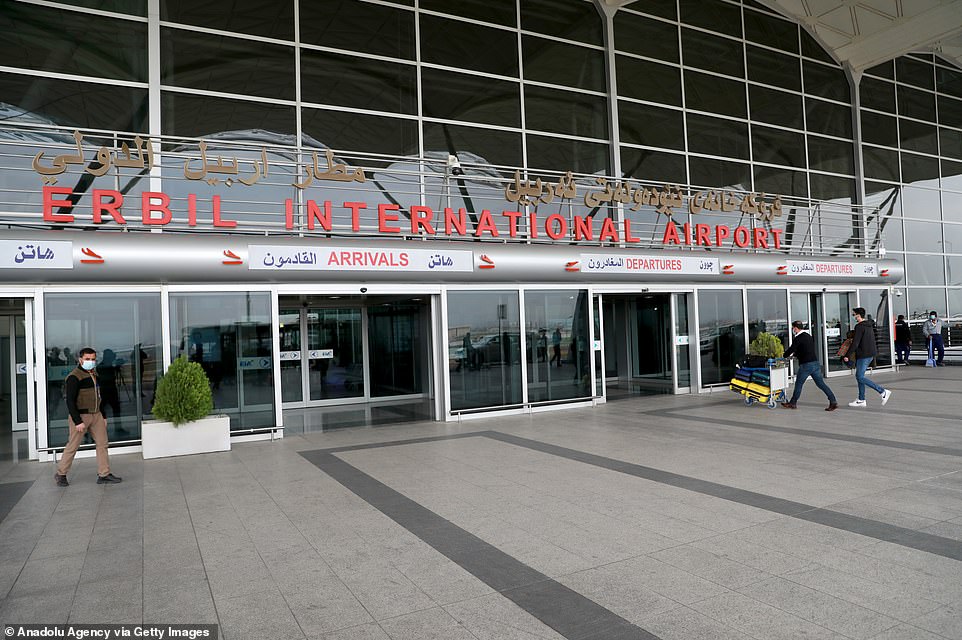 A view of the Erbil International Airport after flights restarted, following a rocket attack outside the international airport, in Erbil, Iraq on February 16 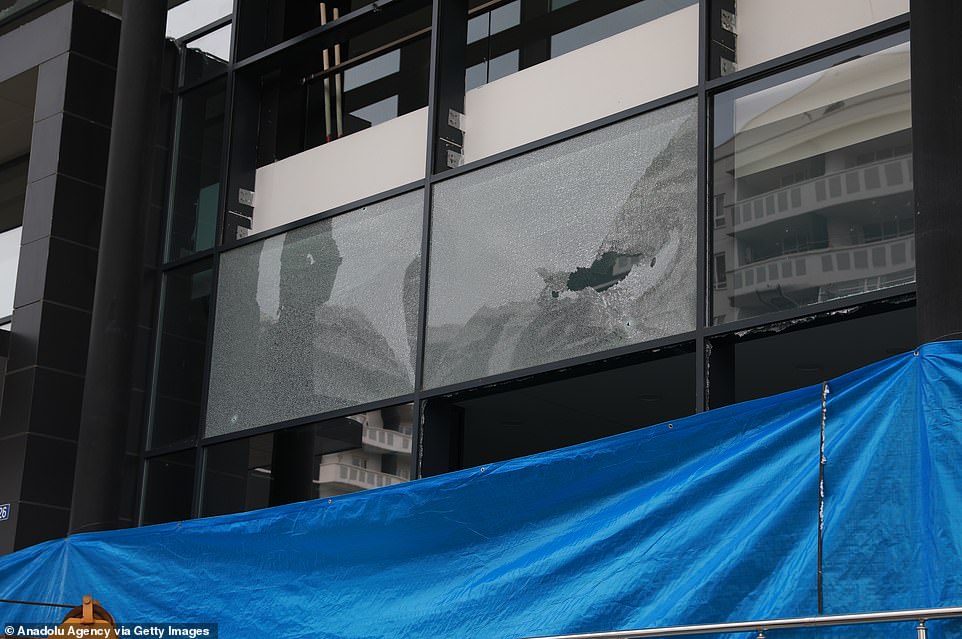 A view of the scene after a rocket attack outside the international airport in Erbil, the capital of northern Iraq’s Kurdish region on February 16. The group, calling itself the Guardian of Blood Brigades, said in a statement that it had fired 24 rockets at the airport and they hit their target

Pro-Iran attacks against the US in Iraq

Western military and diplomatic sites in Iraq have been targeted by dozens of rockets and roadside bombs since late 2019, with both foreign and Iraqi personnel killed.

In December 2019, a US contractor was killed in a rocket attack on a base in Kirkuk province, prompting the US to respond with air strikes against Kataeb Hezbollah.

Furious pro-Iranian militia men stormed the US embassy in Baghdad following the strikes on Kataeb Hezbollah.

Kataeb Hezbollah is an Iran-sponsored Shia Muslim faction which is part of Iraq’s Popular Mobilization Forces (PMF). The PMF was assembled by Iraq to help combat Islamic State but, since defeating the radicals, the PMF has been unwilling to bend to the government in Baghdad.

Just days after the storming of the US embassy, top Iranian commander Qasem Soleimani was killed in a US rocket strike on January 3. His motorcade was obliterated by a US Reaper drone after he arrived from either Syria or Iraq. Several PMF commanders were also killed in the strike.

Soleimani was the architect of Iran’s foreign policy and Washington said his travel throughout the Middle East, especially into Iraq and Syria, was inextricably linked to Tehran’s anti-American designs.

Following the strike, rocket attacks were carried out by pro-Iranian militia on al-Asad, a coalition airbase in the west of Iraq. In March 2020, another rocket attack killed two Americans – a soldier and a contractor – and a British soldier.

In October, the US threatened to close its embassy in Baghdad unless the attacks stopped. The Iraqi government facilitated an indefinite truce with hardline groups and the fire had come to a near halt.   But there have been violations, the most recent of which had been a spray of rockets targeting the US embassy on December 20.

A week later, a rocket attack in Baghdad’s Green Zone appeared to target the US Embassy compound, but no one was hurt.

‘I’m confident in the target that we went after, we know what we hit,’ Defense Secretary Lloyd Austin told reporters flying with him from California to Washington.

Speaking shortly after the airstrikes, he added: ‘We’re confident that that target was being used by the same Shia militants that conducted the strikes,’ he said referring to the February 15 rocket attack in northern Iraq that killed one civilian contractor and wounded a US service member and other coalition personnel.

Austin said he recommended the action to Biden.

The frequency of attacks by Shiite militia groups against US targets in Iraq diminished late last year ahead of Biden’s inauguration, though now Iran is pressing America to return to Tehran’s 2015 nuclear deal.

The US under the previous Trump administration blamed Iran-backed groups for carrying out the attacks.

Trump had said the death of a US contractor would be a red line and provoke US escalation in Iraq.

The December 2019 killing of a US civilian contractor in a rocket attack in Kirkuk sparked a tit-for-tat fight on Iraqi soil that brought the country to the brink of a proxy war.

US forces have been significantly reduced in Iraq to 2,500 personnel and no longer partake in combat missions with Iraqi forces in ongoing operations against the Islamic State group.

May 2018: Trump withdrawing from the Iran nuclear deal which was drawn up in 2015 under President Obama.

August 2018: The Trump Administration imposes first round of sanctions, prohibit trade with a number of business sectors

November 2018: The Trump Administrations imposes a second round of sanctions which target oil and banking industries. The sanctions have a crippling effect on the Iranian economy

April 2019: Trump designates one arm of the Iranian military as a ‘terrorist group’ – an inflammatory move that prompts the Iran to hit back and call the US a ‘state sponsor of terrorism’ 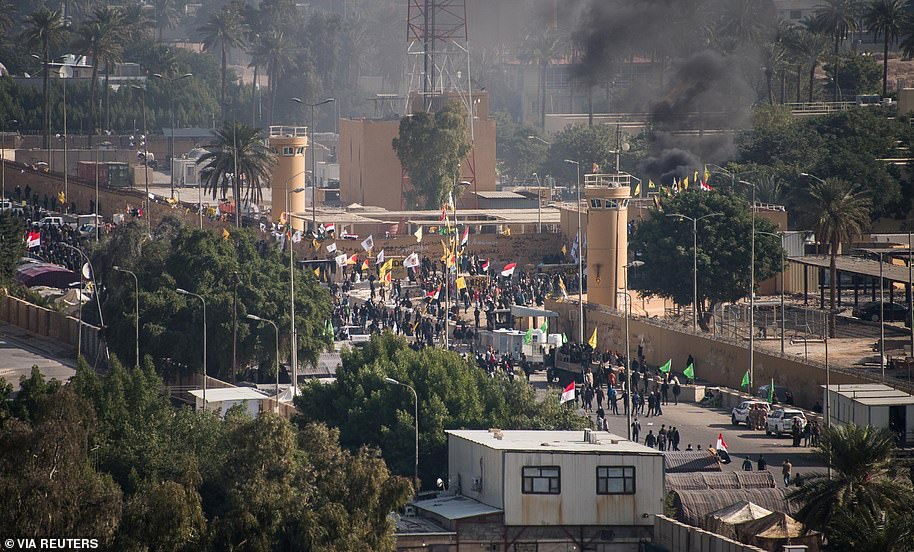 Iraqi security forces deploy during the second day of protests at the U.S. embassy in Baghdad, Iraq, in December 2019 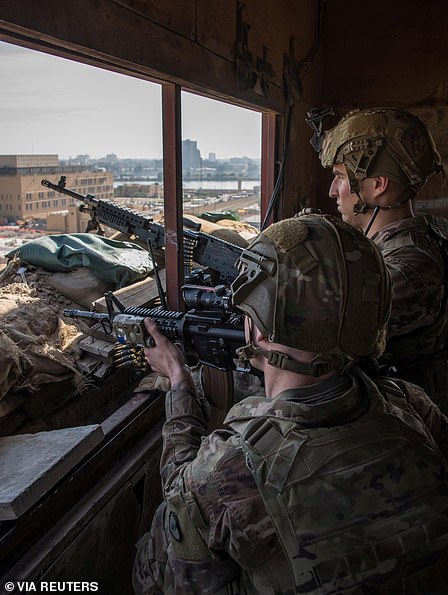 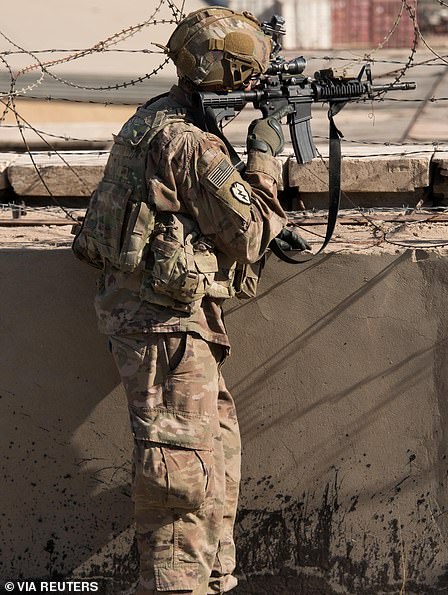 Under siege: US soldiers keep watch on the US embassy in Baghdad from an observation post in December 2019

May 2019: Four tankers – including two belonging to US ally Saudi Arabia – are struck and damaged in the Gulf of Oman. The US blames Iran for the attack

May 2019: A rocket lands near the US embassy in Baghdad, prompting Trump to tweet ‘If Iran wants to fight, that will be the official end of Iran. Never threaten the United States again!’

June 2019: Iran shoots down a US surveillance drone over the Strait of Hormuz. An enraged Trump who considers launching airstrikes in retaliation

July 2019: Iranian president Hassan Rouhani said that if any more American drones violated Iranian airspace ‘then they will receive the same response’ as the one that was blasted out of the sky the previous month

July 2019: Additional troops and fighter jets are put in place in the Middle East ‘to defend American forces and interests’ amid escalating tension

September 2019: Iran is blamed for an attack on two Saudi oil fields responsible for five percent of the global oil supply – or about 5.7 million barrels per day. Secretary of State Pompeo described the attack as ‘an act of war’

September 2019: US national security officials reportedly presented President Trump with a ‘menu’ of options that include military strikes and cyber attacks

December 2019: Thousands of pro-Iranian militia men storm the US embassy in Baghdad. 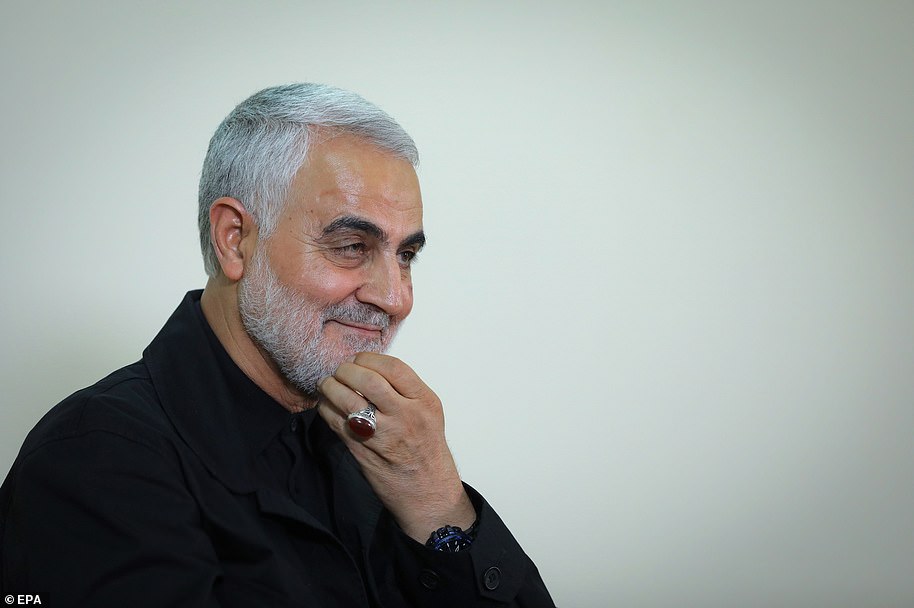 Iran vows revenge for the killing and rockets strikes are launched by pro-Iranian factions against US bases in Iraq.

Two British warships are ordered to escort UK-flagged ships through the Strait of Hormuz.

March 2020: Another rocket strike in Iraq kills two Americans – a soldier and a contractor – and a British soldier.

April 2020: Revolutionary Guards chief Hossein Salami says he has ordered Tehran’s naval forces to destroy any US warships that threaten the ‘security’ of Iranian vessels, after Trump said he had told the US Navy to fire on any Iranian ships that harass it at sea.

October 2020: US threatened to close its embassy in Baghdad unless the attacks stopped.

December 2020: Spray of rockets are launched at the US embassy. Trump vows that if one American is killed he will launch a massive bombing campaign.

January 2021: Iran seizes a South Korean-flagged tanker in the Gulf, the first such seizure in more than a year.

It comes amid Iranian pressure on Seoul to release $7billion in Iranian oil funds that are frozen because of US sanctions.