Bill Gates’s money manager shared nude photos of women in the office, rated female colleagues on their looks and made racist and sexually-offensive remarks, former employees have claimed.

When a female staff member was attending Weight Watchers, Larson asked if it was to lose weight for him.

Another woman at his firm was asked by Larson if she would strip for a certain amount of money. 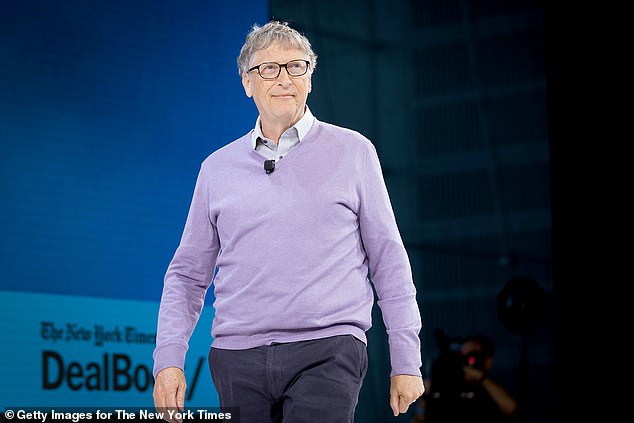 Gates, 65, was not a social friend of Larson, but the pair had a close working relationship

It is unclear if Larson, a golf fanatic who maintains a low profile, was married at the time. In 2014 The Wall Street Journal reported he was married with three children.

The New York Times’ revelations about Larson comes after the May 4 announcement that the Gateses were divorcing.

The announcement has opened the floodgates to stories about his affair, in 2000, with a Microsoft employee.

Epstein, who had been charged with sexually abusing dozens of young girls in the early 2000s, died by suicide while in custody in 2019.

Melinda Gates was said to have been deeply uncomfortable with Epstein after their first meeting, and urged her husband to steer clear of the pedophile financier.

She was also unhappy with an investigation into Larson, in 2018, which ended with the woman involved receiving a payoff.

At times the Gateses were dragged into complaints about Larson.

One woman who managed a local bike store, which was mostly owned by a firm, Rally Capital, that Cascade had invested in, complained that Larson repeatedly propositioned her. She repeatedly rebuffed him, but she claimed – in a lawyer’s letter sent to the Gateses, threatening to sue – that he had exposed himself to her, and said he wanted to have sex with her and another woman.

Bill Gates agreed to settle the matter by having a payment made to the bike store manager.

Melinda French Gates insisted that an outside investigator review the incident and Cascade’s culture – an investigation that took place in 2018, as Larson went on leave. 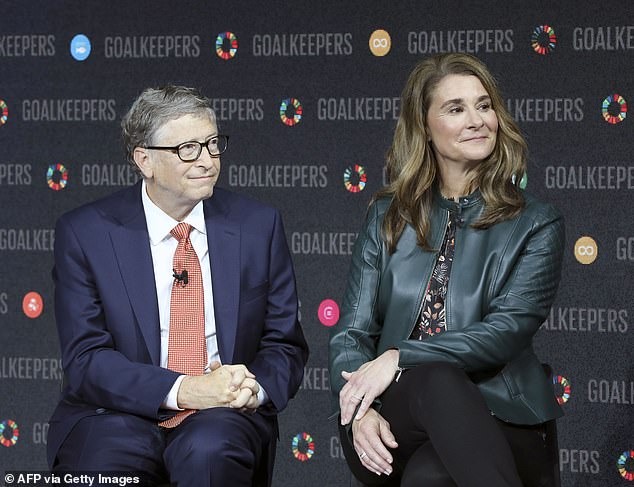 Bill and Melinda Gates, pictured in 2018, hired Larson in 1994 to manage their finances

Bill Gates’s relationship with Larson began in 1993, when his previous financial manager, Andrew L. Evans, was sent to prison for bank fraud.

After taking the job, Larson decided to go ‘off the radar,’ said Roger McNamee, a co-founder of Elevation Partners, a Silicon Valley firm that was an early investor in Facebook.

A former employee told The New York Times that the philosophy was: ‘We don’t want Bill’s name in the headlines.’

Larson’s firm, incorporated in Washington state near the offices of both Bill and Melinda Gates’s companies and Microsoft, grew to more than 100 people, all working to increase the wealth of both the Gateses personally, and their Foundation.

Larson was known to be a comparatively traditional investor, who preferred safe bets to huge risks.

He invested their money in farmland, hotels, stocks, bonds, even a bowling alley.

Thanks to Larson’s team and the rise in value of Microsoft’s shares, Bill Gates’s fortune has gone from less than $10 billion to about $130 billion. 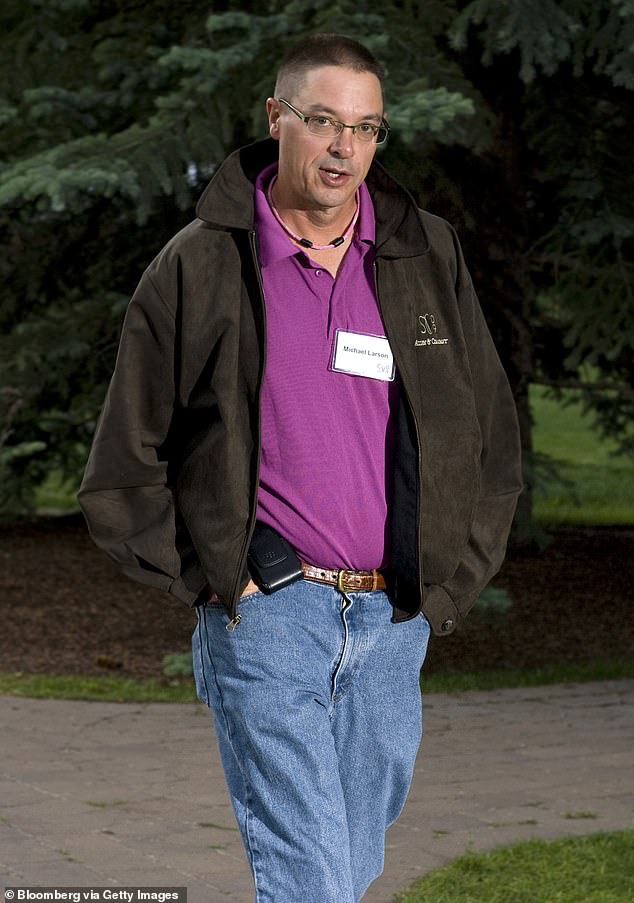 Larson is seen in July 2009, arriving for the annual conference in Sun Valley, Idaho

In September 2014, the Gateses held a dinner for Larson at their Seattle mansion, nicknamed Xanadu 2.0, to celebrate Larson’s 20 years of working with them.

Gates gave a toast to Larson, The Wall Street Journal reported at the time, and said Larson has his ‘complete trust and faith’.

He added: ‘Melinda and I are free to pursue our vision of a healthier and better-educated world because of what Michael has done.’

Larson and Gates were not friends, and did not mingle socially. But Gates certainly appeared to have Larson’s back.

Walsh said he was impressed by the 2014 party.

‘It was almost tender – and endearing,’ he told The Wall Street Journal.

Yet behind closed doors, the problems were plain to see.

Stacy Ybarra, who joined the company in 2001 as an investor relations analyst, announced that she was leaving in 2004 for another firm, InfoSpace.

Larson was furious, and set out to sabotage her new company – telling Ybarra and others that he had shorted InfoSpace’s stock out of spite, according to the three people, who heard about his remarks at the time, The New York Times said.

Ybarra then decided to stay at Larson’s firm.

In November of that year, Larson was asking his staff about the best time to vote for the presidential election.

Ybarra, who is black, replied that she had voted that morning without having to wait in line.

Larson responded: ‘But you live in the ghetto, and everybody knows that black people don’t vote.’

Complaints were made, and Bill and Melinda Gates later spoke to Ybarra as part of an investigation.

In January 2005, she quit Cascade, received a small payout and agreed to not speak about the firm in the future.

Chris Giglio, Larson’s spokesman, denied that he had made the racist remark.

‘During his tenure, Mr Larson has managed over 380 people, and there have been fewer than five complaints related to him in total,’ Giglio said.

‘Any complaint was investigated and treated seriously and fully examined, and none merited Mr Larson’s dismissal.’

In November 2006, the Gateses were again alerted to concerns about Larson – this time in a letter from Robert E. Sydow, a California fund manager who had been close friends with Larson and was godfather to one of Larson’s children.

Sydow’s firm, Grandview Capital Management, had been hired by Larson to manage a $1.6 billion slice of the foundation’s endowment.

Sydow warned Larson that he needed ‘to stop using his power to hurt others in anger,’ and in the letter to the Gateses warned them about a toxic environment at the firm.

As a result, Larson’s office was moved to a different floor, away from his staff, and employees including Larson were required to undergo sexual harassment and sensitivity training.

Yet one former employee told The New York Times that Larson did not seem to take it seriously.

They recalled him saying: ‘We don’t need this.’ 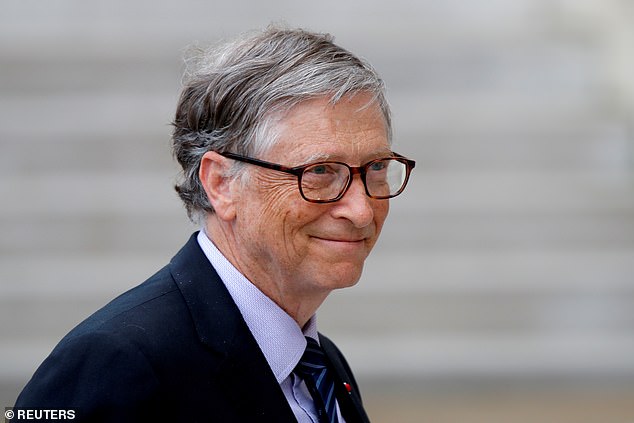 Bridgitt Arnold, a spokeswoman for Bill Gates, said that Bill and Melinda Gates Investments (BMGI), whose name is sometimes used interchangeably with Cascade’s, has robust policies to deal with employee complaints about wrongdoing.

‘BMGI takes all complaints seriously and seeks to address them effectively to guarantee a safe and respectful workplace,’ Giglio said.

She added that ‘any issue raised over the company’s history has been taken seriously and resolved appropriately.’

Larson said, ‘Calling BMGI a toxic work environment is unfair to the 160 professionals who make up our team and our culture.’

Courtney Wade, a spokeswoman for Melinda Gates, said: ‘Melinda unequivocally condemns disrespectful and inappropriate conduct in the workplace. She was unaware of most of these allegations given her lack of ownership of and control over BMGI.’

Larson did admit to using tough language with his staff.

‘Years ago, earlier in my career, I used harsh language that I would not use today,’ Larson said.

‘I regret this greatly but have done a lot of work to change.’

Dominic Cummings is not the world's most credible witness, says expert