Billionaire James Dyson and his wife are selling their three-storey luxury Singapore apartment for £34.5million, at a reported loss of £9million in just a year.

The inventor, 73, also owns a sprawling £26million mansion in the wealthy Asian city-state but has decided to cut his losses on its most expensive penthouse which he bought last June.

He sparked fury when he announced plans to move his business headquarters to Singapore in January last year despite being one of the most prominent Brexit advocates.

The Wallich Residence super penthouse is located at the top of the 931ft Guoco Tower, which became Singapore’s highest building when it was completed in 2016.

James Dyson is selling Singapore’s most expensive penthouse – the Wallich Residence super penthouse – which sits atop the city’s tallest skyscraper, the Guoco Tower. It features an outdoor swimming pool and cabana (pictured) 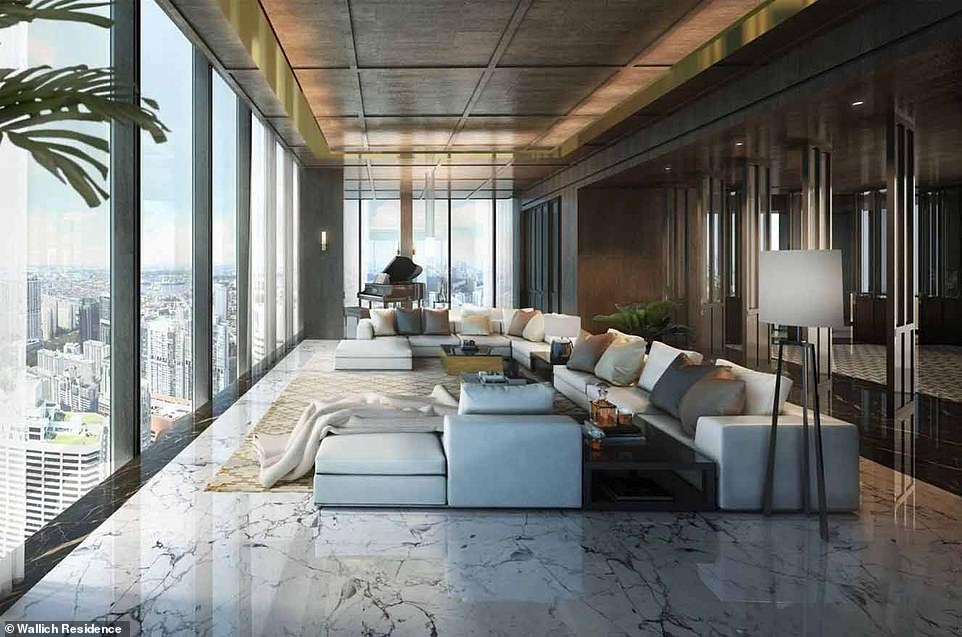 The 21,000sq ft apartment, spread over three floors, is Singapore’s largest raised apartment. Though pictures of the interior feature marble floors and a grand piano, the listing says that a team of designers and architects stand ready to customise it however the buyer wishes

Mr Dyson and his wife Deirdre became tenants of the 99-year leasehold property on June 20 last year, according to title records 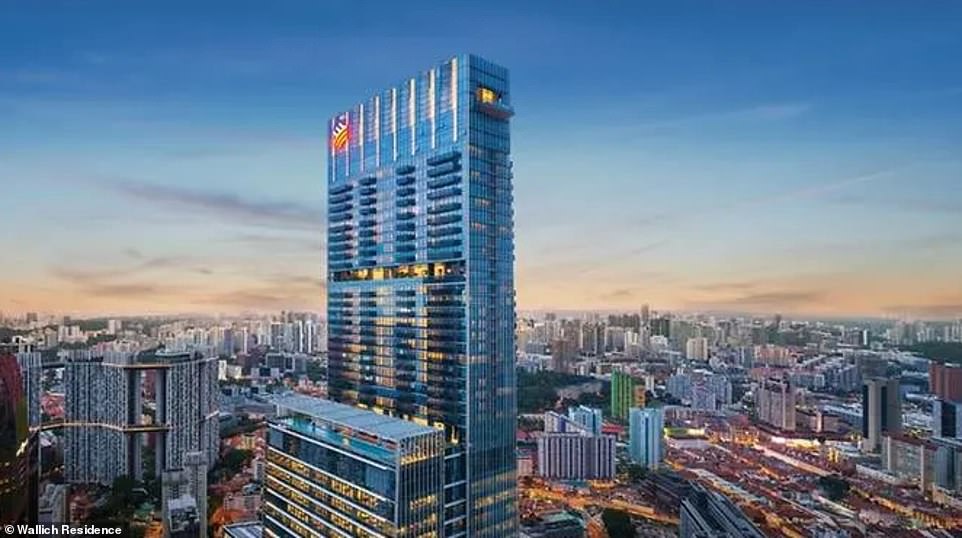 The 64-storey tower became the tallest in Singapore when it was completed in 2016. The building features 181 apartments stretching from the 39th to 64th floors, as well as a five-star hotel and offices

It boasts a 600-bottle wine cellar, five bedrooms, three floors and it features a rooftop swimming pool and Jacuzzi room.

With 21,000sq ft of living space, it is also Singapore’s largest raised apartment. 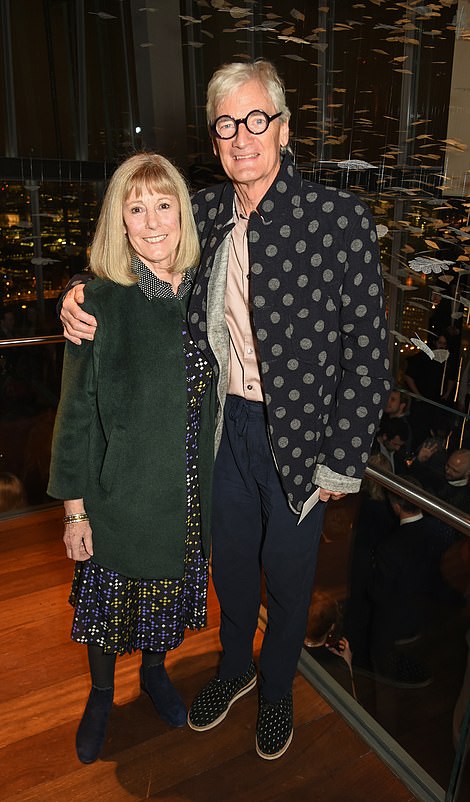 Mr Dyson started out as a fine art student before switching to design, and began selling his bagless vacuum cleaner in Japan in 1986. He is now worth an estimated £9.5bn (pictured with wife Deirdre in 2016)

Photos show an interior decked out with marble floors, a walk-in wardrobe big enough to hang a chandelier in, and a grand piano – although the listing said a team of specialist designers and architects stand ready to customise it however the buyer wishes.

The apartment will also grant the new owner access to the facilities and services at the five-star Sofitel Singapore City Centre, which is located in the same building.

He will also have the use of a concierge team who specialise in bespoke services for their clients, including chartering yachts and private planes, as well as hiring chefs to cater dinner parties.

‘An offer has been accepted on the Wallich penthouse,’ said a spokesman for Dyson’s firm.

He declined further comment on the family’s personal properties or affairs but said Dyson would continue to maintain a home in the wealthy Asian city-state and it does not affect the business’s plans there.

Mr Dyson and his wife Deirdre Hindmarsh became tenants of the 99-year leasehold property on June 20 last year, according to official title records.

Deirdre, who is thought to be in her early 70s, met James while the pair were studying at Byam Shaw School of Art in the mid-1960. They married in 1968 and have three children together, Emily, Jake and youngest son Sam.

The Business Times newspaper, which first reported the sale, said an offer of £34.5 million was accepted for the penthouse, or a drop of more than 15 per cent from Dysons’ purchase price of £43.5million.

The apartment, which also includes a pool, hot tub, and a private garden with city views, was once valued at £57million, making it the city-state’s most expensive penthouse.

The buyer is Indonesian-born tycoon Leo Koguan, the paper said.

The US citizen is chairman and co-founder of infotech provider SHI International, which counts Boeing and AT&T among its 20,000 customers, business magazine Forbes says.

A large entertaining space complete with bar facilities occupies one of the floors. The new owner will also have use of a concierge service which offers a range of services, including booking private chefs for dinner parties 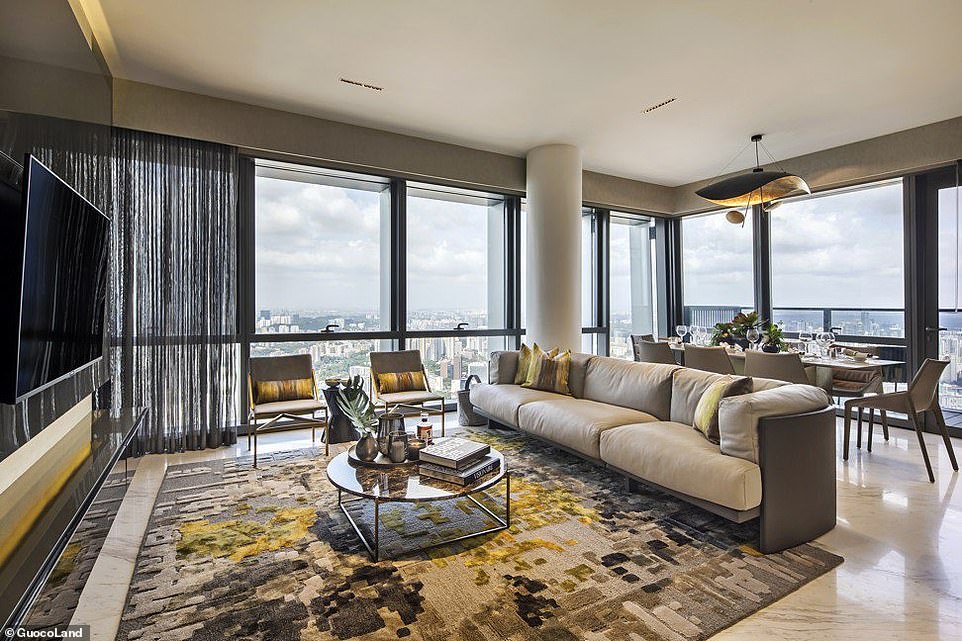 The apartment sits atop the five-star Sofitel Singapore City Centre hotel, with the owner entitled to access all of the facilities and services that the hotel offers (pictured, one of the apartment’s living spaces) 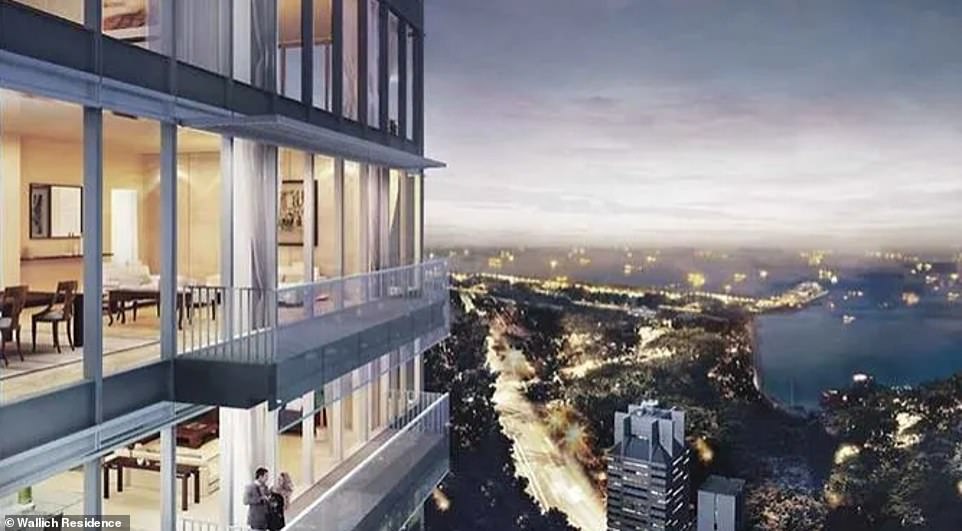 The Guoco Tower is located on the southern side of the island state of Singapore with views overlooking the Singapore Strait, and close to several historic Buddhist temples and a short walk from the famous Gardens By the Bay 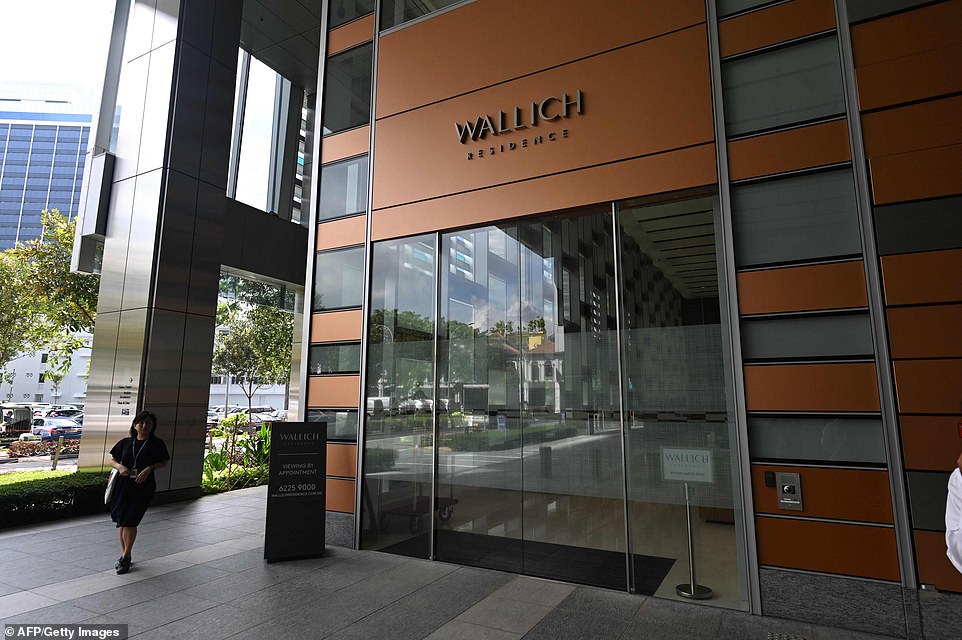 An entrance to Wallich Residence at Guoco Tower, which Mr Dyson is selling after only one year. He owns several more multi-million pound homes including two in England, one in France, and another in New York 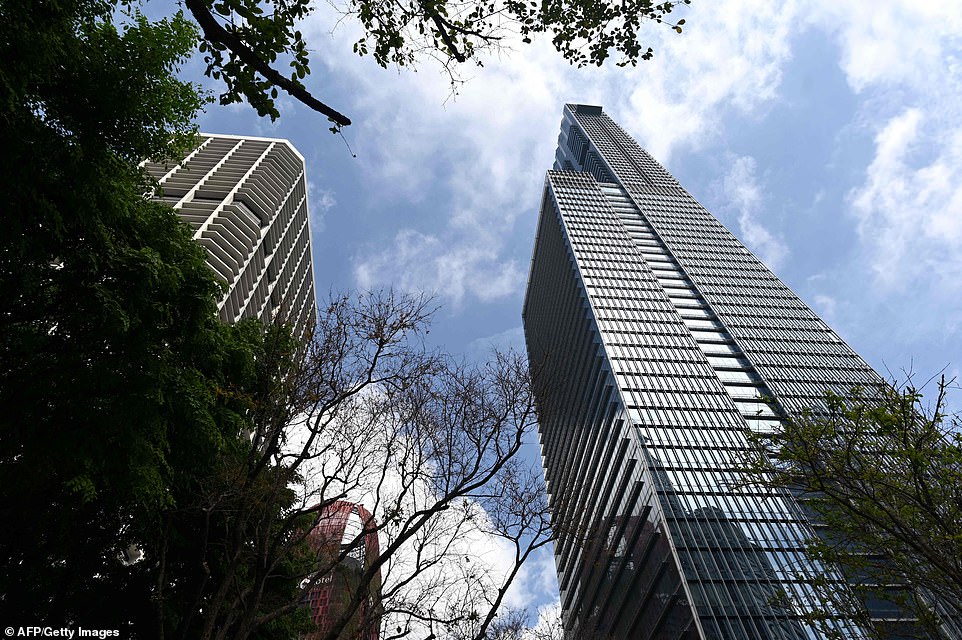 Guoco’s penthouse apartment became known as the city’s most expensive when it was unveiled the following year with a guide price of 100million Singapore dollars. Mr Dyson paid a significantly lower sum to acquire it

Affluent and developed, the city-state has long attracted wealthy residents from around the world – a trend that has helped fuel a rise in property prices over the years.

The Dysons’ other home in Singapore is a luxury property on a plot of land with an infinity pool and an indoor waterfall.

The freehold property, which sprawls over 15,000 square feet of tropical land, boasts a waterfall, an infinity pool and a landscaped garden.

Located in an exclusive area of the city, the modern build backs on to Singapore’s Botanic Gardens – a UNESCO World Heritage Site. 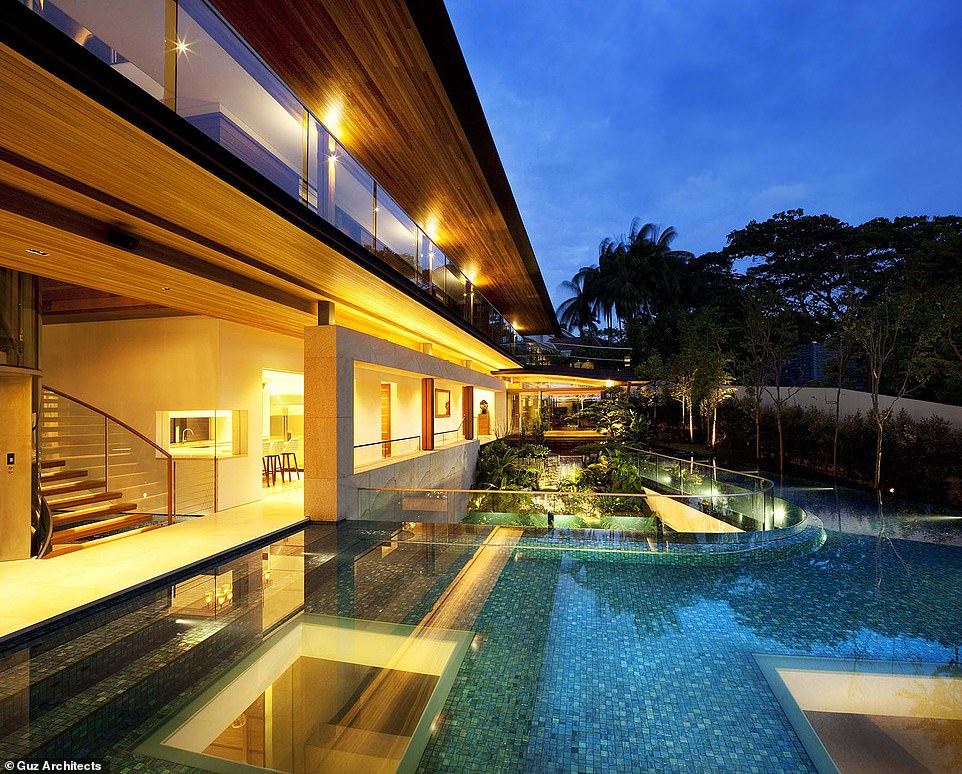 Mr Dyson still owns this luxury Singapore modern mansion which was marketed for an eye-watering £26million, which he bought in July last year 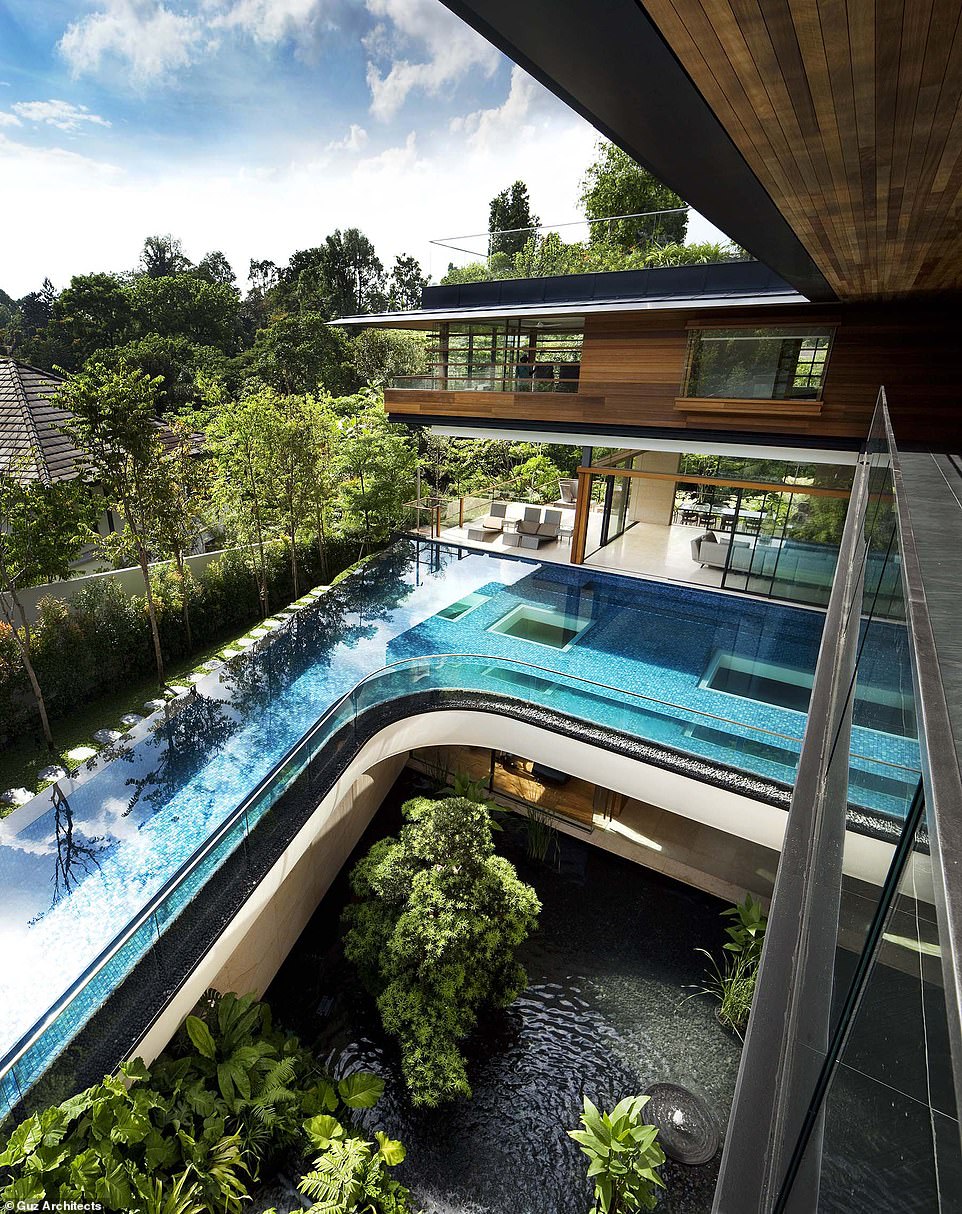 The freehold property, which sprawls over 15,000 square feet of tropical land, boasts a waterfall, an infinity pool and a landscaped garden 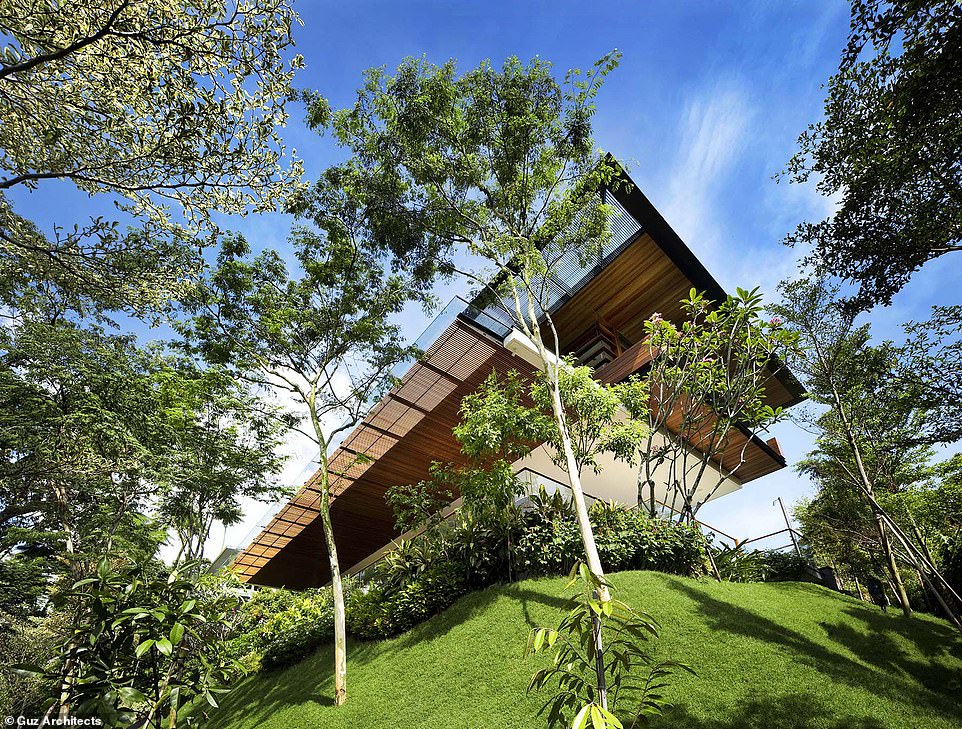 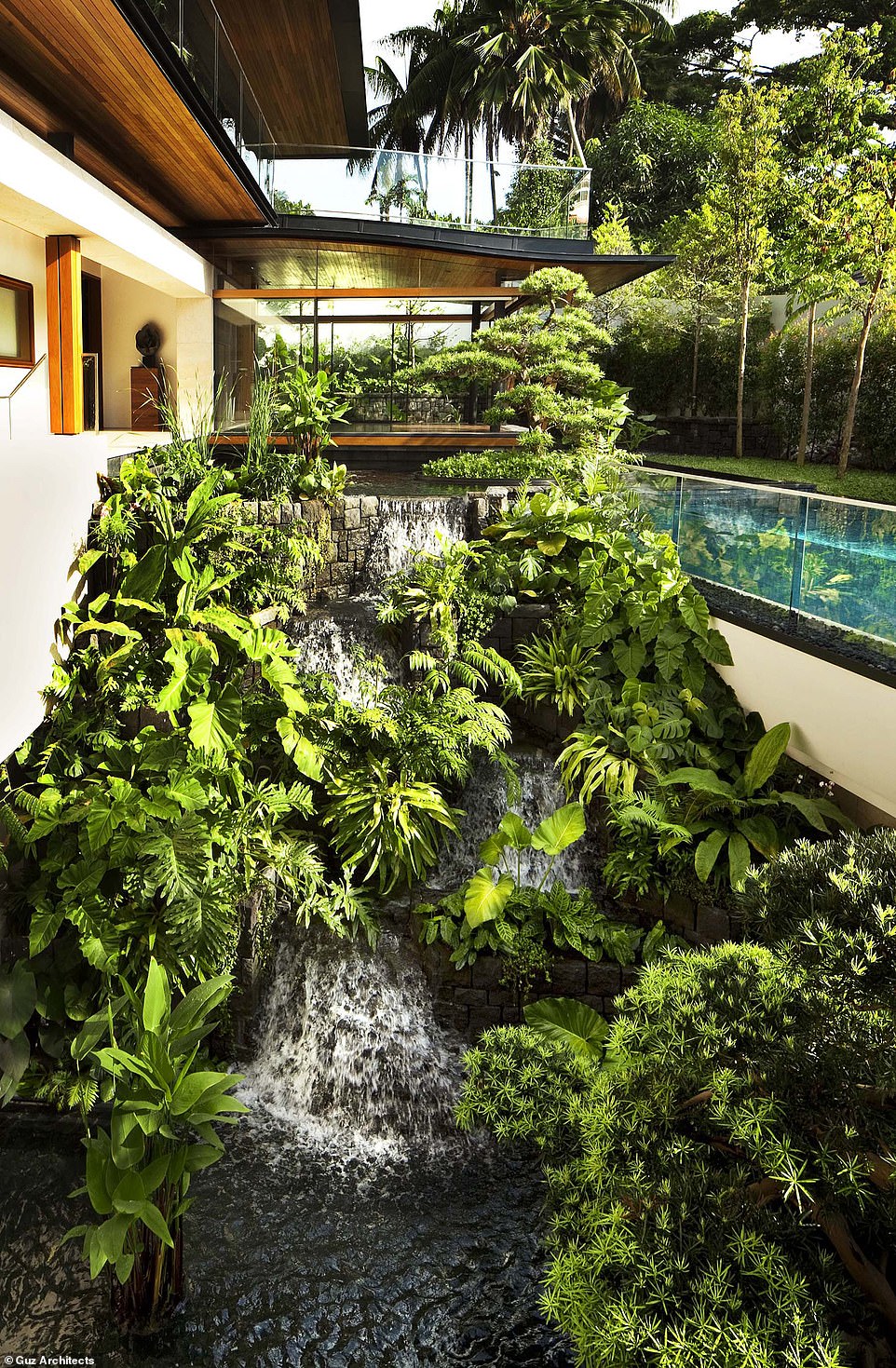 In order to buy the tropical-themed property, one must gain approval from the Singapore government by making ‘exceptional economic contributions’ to the country 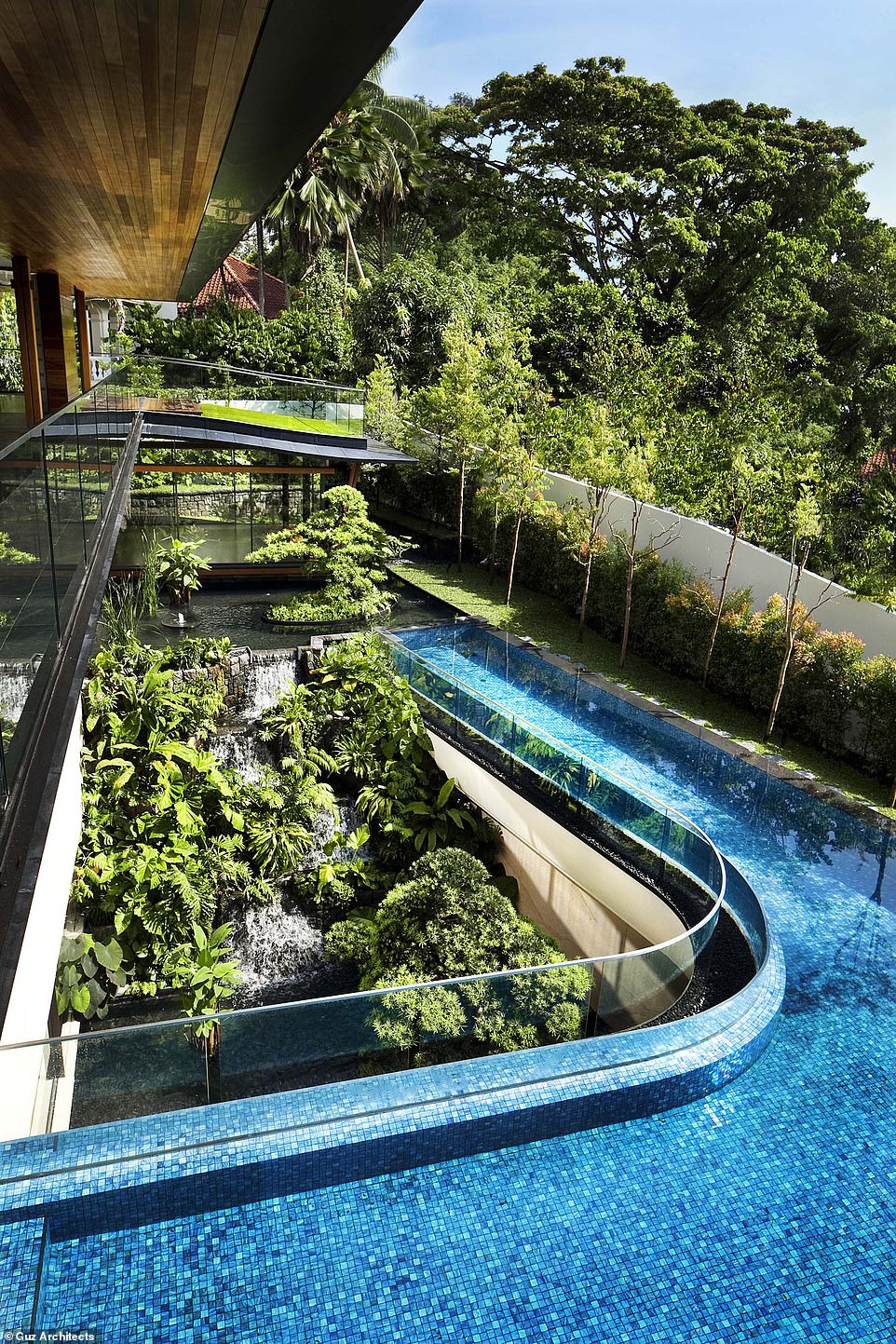 The property is fitted with an infinity pool which snakes through the house and out into the landscaped garden. Big glass windows and walls fill the mansion with natural light and allow views over Singapore’s Botanic Gardens 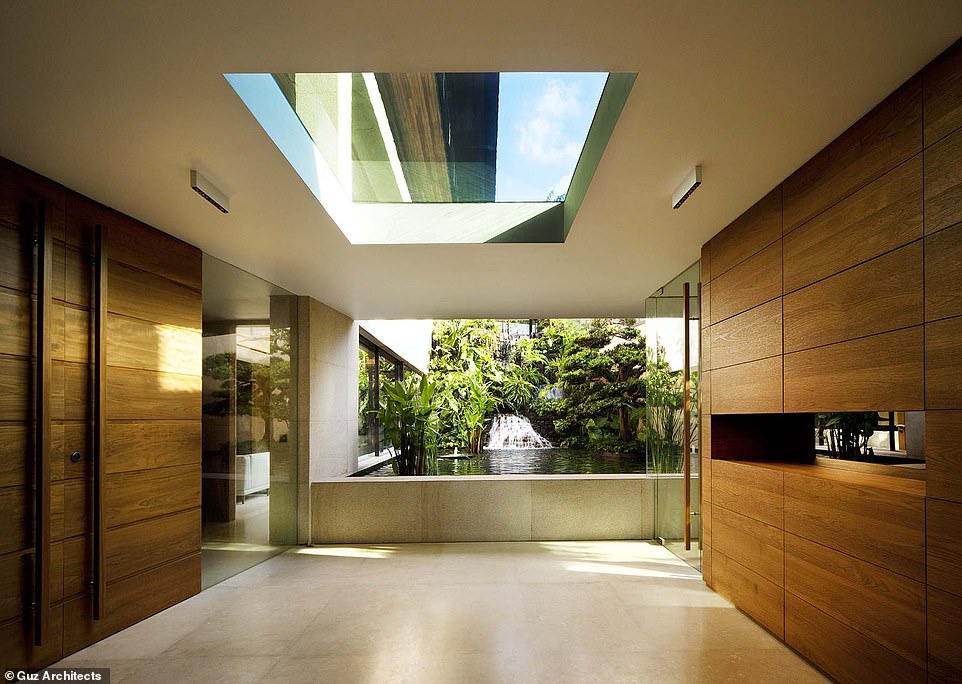 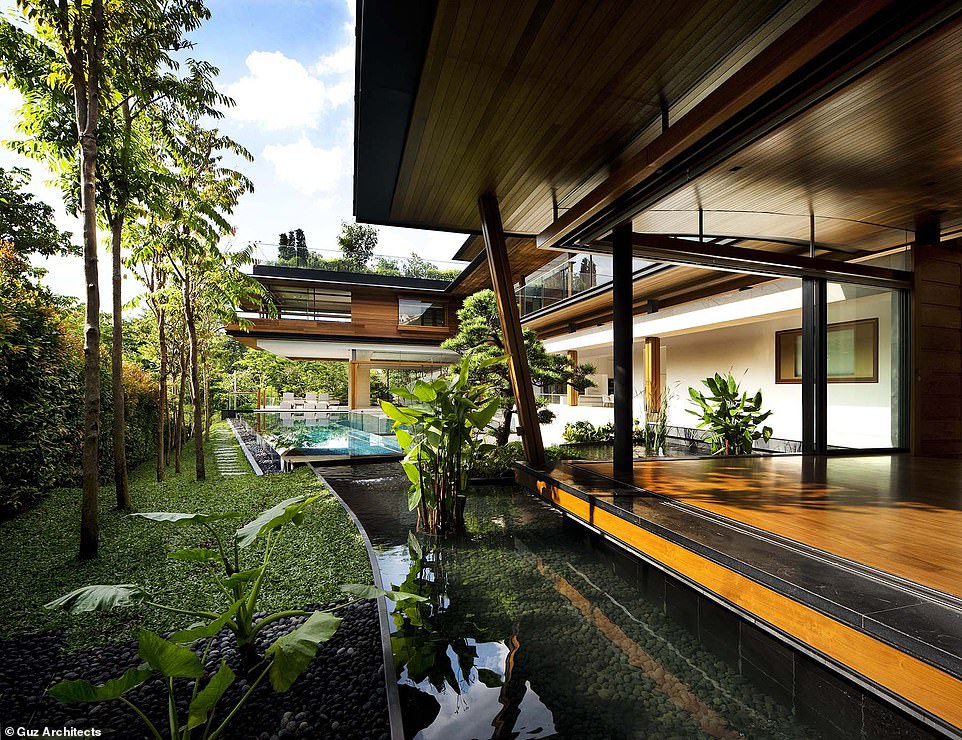 The enormous property boasts a landscaped garden bursting with wildlife. Affluent and developed, the city-state has long attracted wealthy residents from around the world – a trend that has helped fuel a rise in property prices over the years

His remaining Singapore property is just one of Mr Dyson’s large collection of envy-inducing properties, which includes a £20 million London town house and a £3million chateau in Provence with its own vineyard.

A £50million penthouse apartment in New York and a 51-bedroom stately home in Gloucestershire also bear Dyson’s name on the doorbell.

The billionaire has moved his company’s head office to Singapore from Britain to be closer to its fastest-growing markets.

Mr Dyson also has a a £40million Gulfstream jet in his personal hangar, and a vast yacht called the Nahlin which once transported Edward VIII and his married lover Wallis Simpson around the Adriatic, and was restored by the inventor at a cost of £25million. 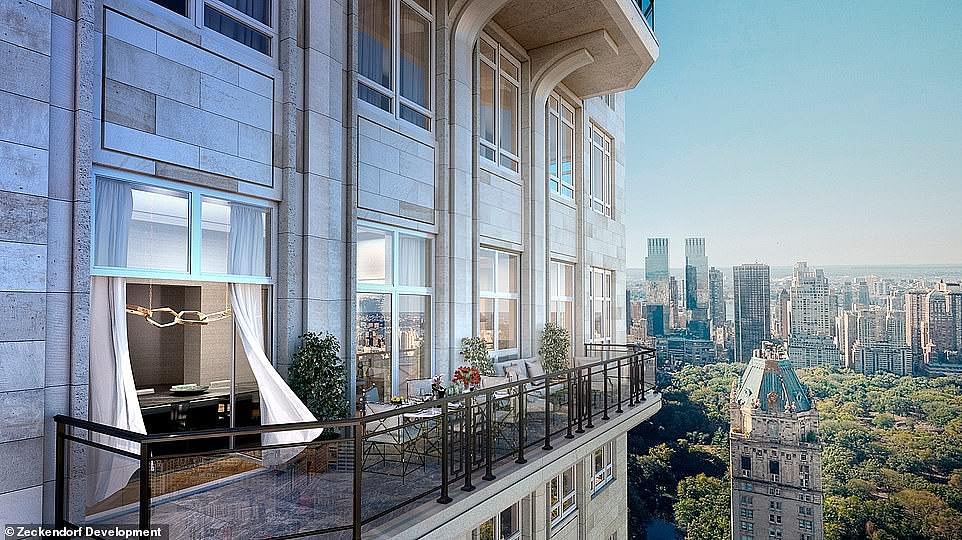 The Singapore property is just one among a long list of Mr Dyson’s properties, which also includes a six-bedroom penthouse at 520 Park Avenue in Manhattan (pictured), which he bought in November last year for a cool $73.8million 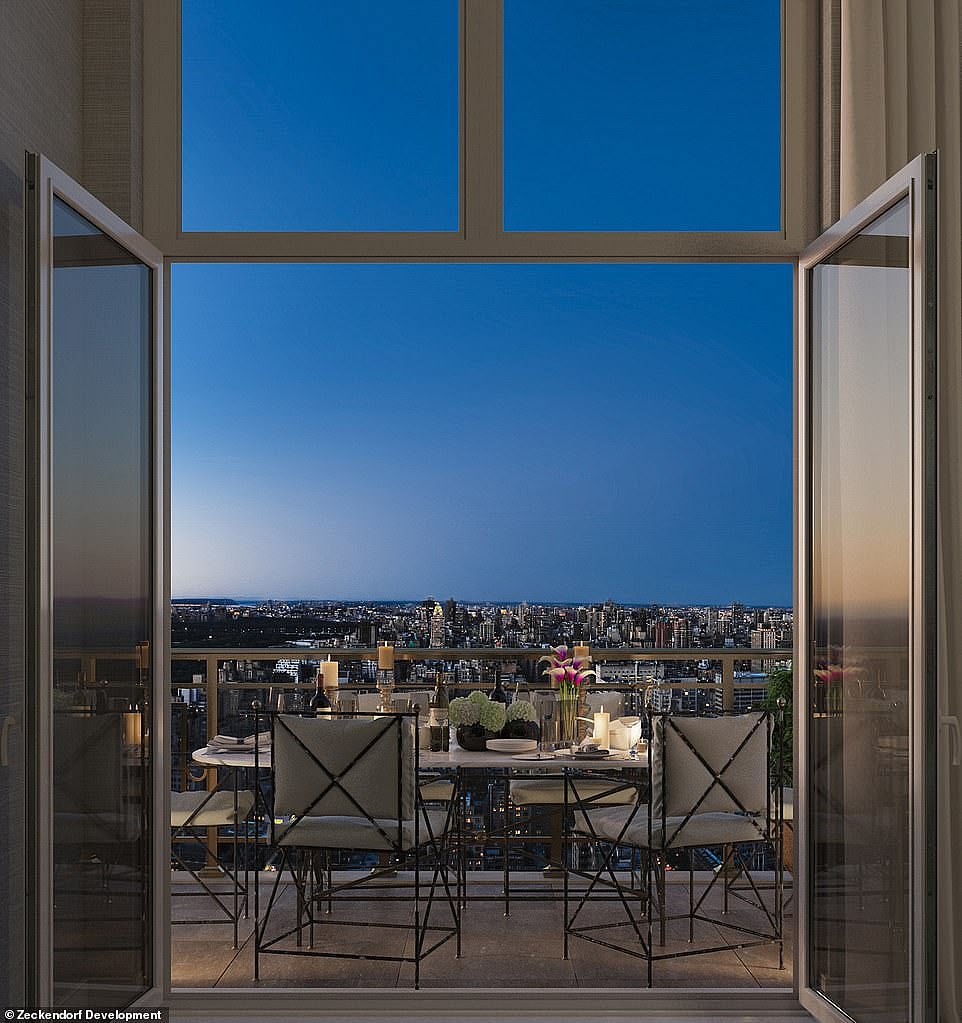 The view from the penthouse balcony stretches out over Manhattan and Central Park, and the building is located at 520 Park Avenue, only a short walk from Dyson’s flagship store 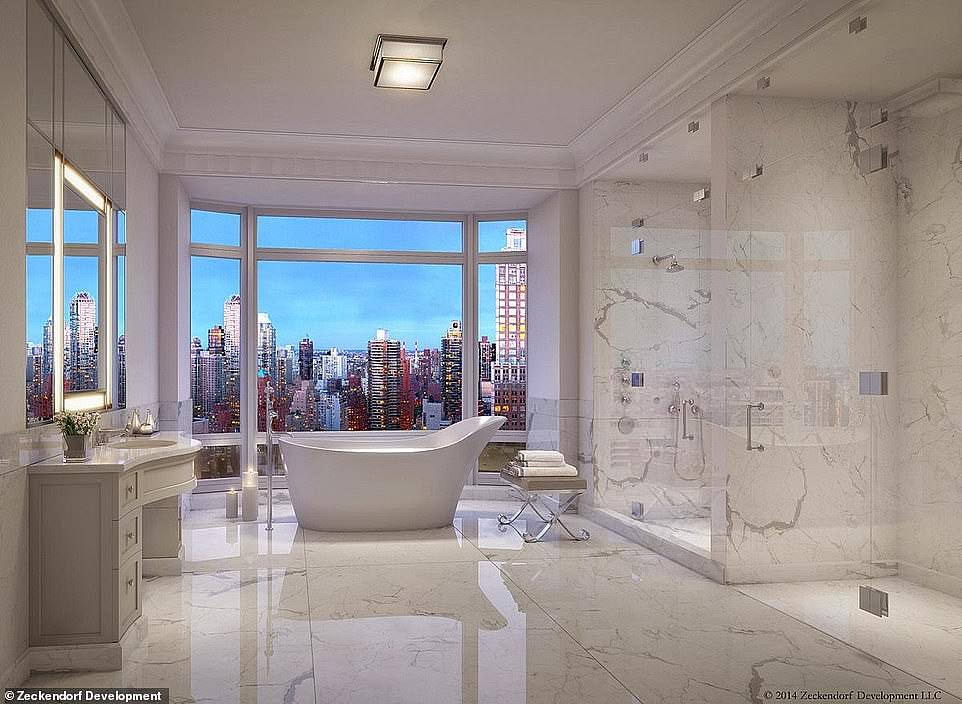 ‘Every apartment is a city villa in the sky, floating above genteel Park Avenue, with classic views of Midtown to the south and the green landscaped Central Park to the north’ says the building’s website 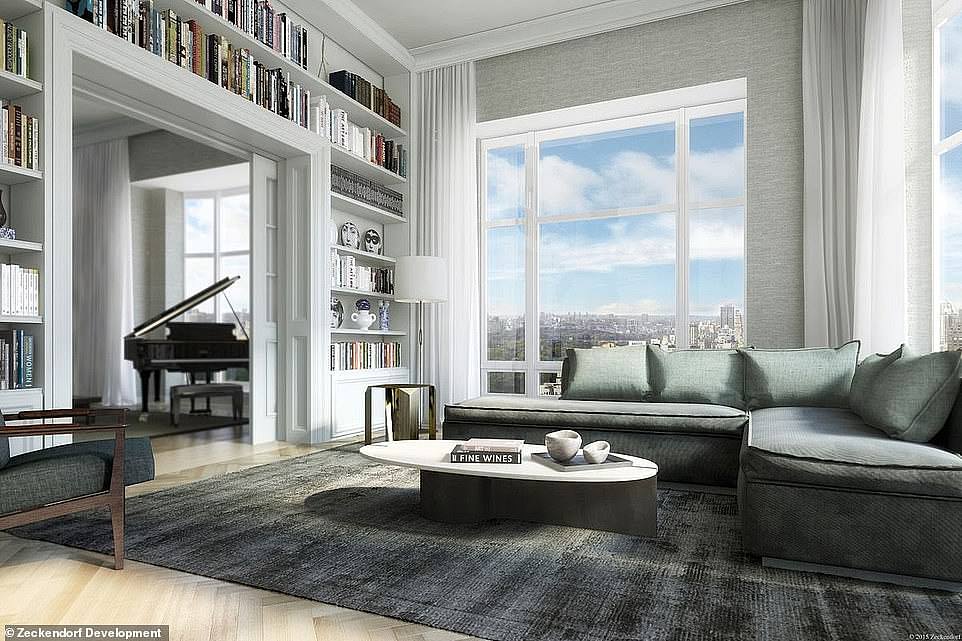 The stately Manhattan penthouse was bought by Dyson for $73.8million – a 24th-floor unit recently sold for a slightly less exuberant $24million along with a 30th-floor unit that went for $25.8million

A fine art student before switching to furniture and interior design while studying at London’s prestigious Royal College of Art, Mr Dyson founded his eponymous design brand in 1979 and in order to work on the machine that would make his name – a bagless vacuum cleaner.

Last year, he scrapped plans to build an electric car in Singapore as not being commercially viable.

‘Dyson remains fully committed to expanding its research and development footprint and other operations in Singapore,’ the spokesman added.