Saunders fights for the first time since being fined for misconduct over a coronavirus lockdown video, which he says was “blown out of proportion.”

“I know Martin is coming to fight but I haven’t been beaten on UK soil since I was 12 years old,” said Saunders, 31.

Murray, 38, insists he will win a world title at the fifth attempt.

Unbeaten Saunders will make the second defence of his 168lb crown at Wembley against a man who has fought for a world title four times, with at least two ending in debatable points decisions.

“People are looking at this fight as a walk in the park for me and think I should win easily,” said the Hertfordshire boxer, who is rated 1-25 favourite by bookmakers.

“He’s going to bring a good game, but afterwards he can take his cash back and have a good Christmas and retire with the family, because that’s what I’m planning on doing, retiring him.”

The pair were twice due to meet in 2018 but the fight never happened because of injuries to Saunders, who scaled 11st 13lb 5oz at the weigh-in.

Murray, who was an ounce heavier, said: “I really rate Billy Joe. We’ve got unfinished business. I firmly believe that the pull-outs years, all the little setbacks I’ve had, have all brought me to this point.

Belfast fighter James Tennyson takes on Canadian Josh O’Reilly in an eliminator for the WBA lightweight title on the undercard.

Super-bantamweight Shannon Courtenay, meanwhile, will bidding to get her career back on track against Dorota Norek after losing to Rachel Ball last time out. 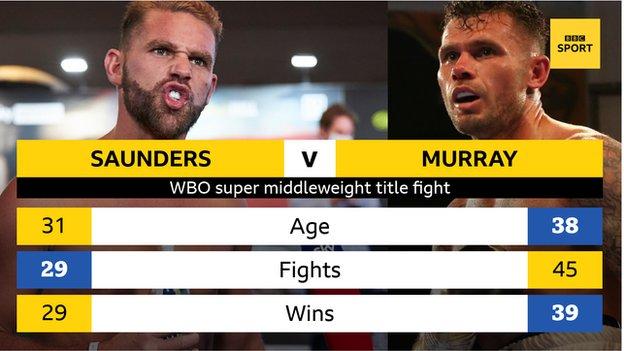 Saunders is eyeing a fight next year with the winner of Callum Smith’s 19 December bout against Saul ‘Canelo’ Alvarez.

The two-weight world champion is hoping for a winning end to 2020 after being found guilty of misconduct in July and fined £15,000 for a video he released advising men how to hit their female partners.

“Anybody that knows me knows I didn’t mean any malice to anybody,” Saunders told 5 Live.

“I’m working with a number of charities now and I would obviously never condone domestic violence. I’ve got a daughter, a sister and a mother. It got blown out of proportion.”

Murray admitted to doubts over his world title ambition when the coronavirus pandemic caused the suspension of boxing earlier in the year.

“I thought Covid had finished my career. I fought in November last year – I didn’t think I was going to get a fight this year,” he said.

“When I got the phone call to say get ready, I couldn’t believe it. I was made up but I have always believed I would get my opportunity.”

What the BBC 5 live experts say

Steve Bunce: “What Saunders did was crass and insensitive. He’s held his hands up, been fined and says he’s learned from it – let’s hope he has.

“Murray’s won 11 different belts, which is not bad going. I’ve always found him to be 100% solid, he’s always spoken straight from the heart. Billy’s got to look masterful if it goes 12 rounds and destructive if it finishes earlier.”

Mike Costello: “When I was sat with him, Murray looked really fit and really fresh. He did look in great shape.

“For me, Saunders is a strong favourite. If he turns it on… he will be too wily and Murray simply won’t have enough success to impress the judges.”

George Ford hits back at criticisms over England kicking too much