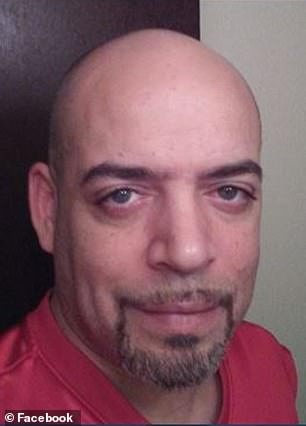 The death of Andre Hill has been ruled a homicide by coroners, just days after he was shot dead by police in Ohio less than 10 seconds after he emerged from his friend’s garage holding a cellphone.

The Franklin County coroner’s office announced the determination in a brief statement Monday, adding that its preliminary investigation determined Hill, 47, died of multiple gunshot wounds. A full autopsy report is expected in 12 to 14 weeks.

Police bodycam footage of the fatal exchange shows Hill stepping out of an open garage door holding up a cellphone as two Columbus police officers approach him, just after 1am on December 22.

Hill was pronounced dead less than an hour later at a Riverside Hospital at 2:25am.

Pettus promised a ‘prompt decision’ on the officer’s employment after the hearing concluded this afternoon. Coy is not currently facing any criminal charges.

Hill (left), 47, walked toward the police officers with his cellphone (right) in his left hand and his right hand in his pocket on Tuesday moments before he was gunned down

Earlier on Monday a disciplinary hearing was held for Officer Adam Coy, 44, (above in 2003) who remains relieved of duty pending a decision about his employment

The hearing comes after Police Chief Thomas Quinlan made a video statement Christmas Eve, saying he had seen enough to recommend Coy be terminated.

Quinlan expedited the investigation and bypassed procedure to file two departmental charges alleging critical misconduct against Coy in the death of Hill.

‘We have an officer who violated his oath to comply with the rules and policies of the Columbus Division of Police,’ he said. ‘And the consequences of that violation are so great, it requires immediate action. This violation cost an innocent man his life.’

Coy and the second officer had been responding to a non-emergency call regarding a man ‘sitting in an SUV for an extended period, repeatedly turning the vehicle on and off,’ the Department of Public Safety has since revealed.

Mayor Andrew Ginther said it remains unclear if the call had anything to do with Hill.

The bodycam footage of the shooting does not initially contain audio because Coy hadn’t activated his camera until after the shots rang out. An automatic ‘look back’ feature captured 60 seconds of the exchange without sound.

An investigation is also being conducted into the other officers who responded to the call that ended in Hill being shot, who Quinlan said also appear to have either failed to activate their body cameras or to render Hill aid.

The Police Chief said any others who violated department protocols will be held accountable.

Officers must activate their body cameras as soon as they are dispatched to a major incident such as a shooting, robbery or burglary, under departmental policy.

Although Coy was dispatched on a non-emergency call, the call became an enforcement action when the officer interacted with Hill because that was separate from the original call, said police department spokesperson Sgt. James Fuqua.

The bodycam footage shows Coy arriving at the scene and approaching a garage with an opened door where Hill, who was at a friends house, was standing inside with his back to the officers.

Hill then turns around a takes four steps toward the officers, with his cellphone in his left hand and his right not visible.

Within six seconds of Hill turning around, he is shot by Coy and falls to the ground.

After pulling the trigger, Coy activated his body camera which then activated the microphone.

The sound starts with him yelling at Hill – who was lying motionless on the ground – ”Put your hands up to the f*****g side!’

He then repeated himself: ‘Hands up to the side now! Go onto your stomach now! ‘

He then yells at Hill: ‘Get your hand out from under your stomach, now!’

The cop’s tone then softens, asking: ‘We got a medic coming?’

As Coy approaches Hill, who is still on the ground, he yells: ‘Don’t move, dude!’ He then leans down, with his gun pointed at the back of Hill’s head.

The officer then curses under his breath.

According to Ben Crump who is representing Hill’s family, he is the 47th unarmed black man to be shot dead by cops this year

An investigation is also being conducted into the other officers who responded to the call that ended in Hill being shot, who Quinlan said also appear to have either failed to activate their body cameras or to render Hill aid (footage from Coy’s bodycam is seen above)

Grabbing at Hill, Coy shouts: ‘Roll over dude’ and turns him over.

A woman can be heard in the background yelling: ‘He wasn’t doing nothing!’

Several seconds later she is heard yelling: ‘He didn’t do anything!’

Coy turns to an officer and says: ‘Get me support’. No one goes to the ground to give him first aid. Instead, Coy walks away from him, on to the street, leaving him on the ground.

He coughs violently, spits and paces up and down the driveway. What sounds like labored breathing can be heard but it’s unclear if it was Hill struggling for breath.

Another two cops are then filmed approaching Hill. ‘I need another person over here,’ one of them says. The other says: ‘Let’s cuff him up’.

Coy then goes to his car to retrieve a bottle of water while other officers stay with Hill. By this point, it has been eight minutes since he shot Hill.

The video shows that at least six minutes pass before aid is rendered to Hill. Coy does not provide any initial aid and in the intervening minutes, crime scene tape is placed around the scene and more officers arrive.

Coy then gets into his patrol car, and picks up a bottle of water. More cops arrive on the scene. He is heard asking: ‘We got any bosses here?’

The recording eventually ends after nearly 14 minutes, when Coy asks if he can switch his bodycam off.

Protesters on Thursday gather outside of the home where Andre Maurice Hill, 47, was killed in Columbus, Ohio, on December 22

In addition to an internal police investigation, Attorney General Dave Yost was appointed a special prosecutor in the death of Hill on Thursday.

‘We will do our duty based on the facts and the law,’ Yost said in a tweet. ‘Whatever the outcome, someone will be angry-but the decision will be objective.’

There is also an investigation under the state’s criminal investigations unit, under Yost, with assistance from the U.S. attorney’s office and the FBI’s Civil Rights Division.

As far as Coy’s employment, the city’s public safety director will now review all evidence and documentation submitted by the police chief Quinlan and rule on his recommendation for Coy to be fired immediately.

Coy has been relieved of duty, ordered to turn in his gun and badge, and stripped of police powers pending the outcome of investigations. By union contract, he will still be paid.

The 44-year-old is a 17-year veteran of the force but has had more than 36 complaints made against him including a dozen alleging excessive use of force. The city has not released any more details about those complaints.

According to The Columbus Dispatch, one involved him banging a man’s head against the hood of a car during a drunk driving arrest.

Hill’s family have now hired Ben Crump, the famed civil rights attorney who has represented the family’s of Breonna Taylor and George Floyd.

Crump said in a statement last week that Hill is the 47th unarmed black man to be shot dead by cops this year.

Reacting to the coroner’s determination Monday, Crump tweeted: ‘Andre Hill’s death is another tragic example of the tendency of police to view Black people as criminal or dangerous, and it points to the need for comprehensive, national police reform.

‘The family wants to review all the bodycam footage as soon as possible.’

A protester lights a candle outside the home where Andre Maurice Hill, 47, was killed in Columbus

Sierra Mason, a national activist with Consistency Speaks, based out of Canton, Ohio, leads protest chants during a demonstration against the police killing of Hill

Last week, Mayor Ginther, meanwhile said he was ‘very disturbed by what he had seen, after the bodycam footage was released publicly.

‘From what we can see, none of the officers initially at the scene provide medical assistance to Mr Hill.

‘No compression on the wounds to stop the bleeding. No attempts at CPR. Not even a hand on the shoulder and an encouraging word that medics were en route.’

A vigil was held for Hill over the weekend, in which family and friends remembered him as a great cook with a passion for people.

Hill, better known by loved ones as Big Daddy, was also said to be passionate about the Black Lives Matter movement and was wearing a BLM shirt on the night he was shot dead by Columbus police.

His killing follows the fatal shooting of Casey Goodson Jr. on December 4 by a white Franklin County Sheriff’s deputy.

The two back-to-back shootings have resulted in an outpour of criticism from advocates and the Black community in Columbus for wider and more comprehensive police reform.