The life-sized flight dummy sat in one of the six crew capsule seats to measure the vehicle’s overall performance during the test flight that saw the rocket reach some 300,000 feet above the surface.

The rocket took off from Launch Site One in West Texas at 12:18pm ET, with a focus on testing new features in the capsule that include environmental features, crew display panels and communication systems.

The mission sent the capsule to the boundary of space, which will one day take tourists for $200,000 a seat, and marks one of the last tests needed before Blue Origin conducts its first crewed mission, according to CNBC news.

The Bezos’ owned company is shooting to fly the rocket again in six weeks and a manned crew in ‘a few months.’ 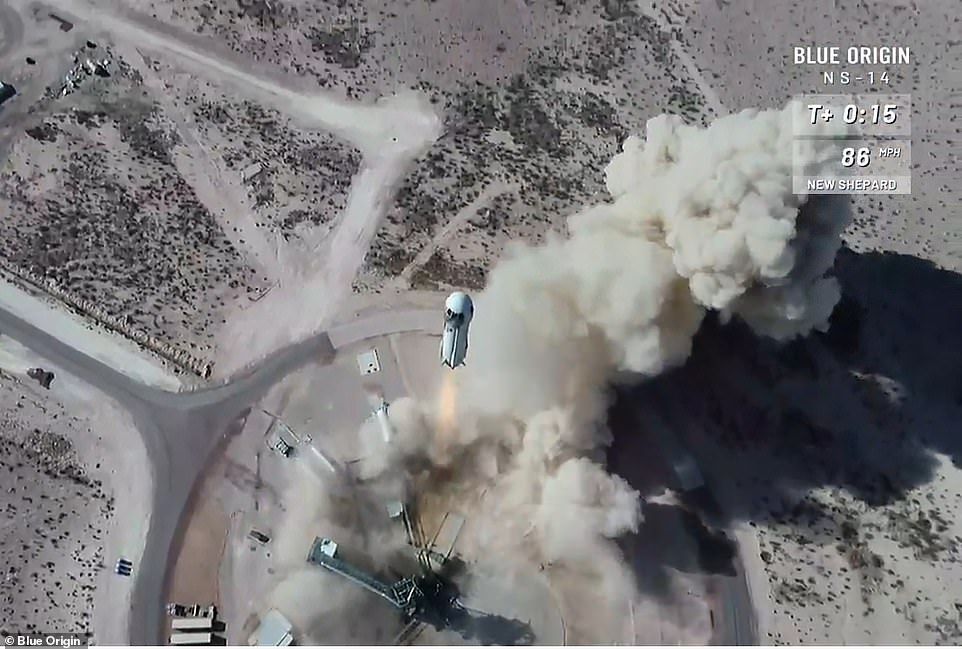 Although Elon Musk’s SpaceX seems to be leading the path of commercial space travel, Bezos’ Blue Origin is not far behind.

In October, Blue Origin broke the record for rocket recycling by launching its New Shepard 13 times – and with Thursday’s successful mission it seems the firm still holds the title.

However, today’s mission was not to bring satellites or other payloads to space, it was for Blue Origin to test its own technologies in the upgraded crew capsule that could have a human in a seat in just a few months.

People familiar with the matter told CNBC that Thursday’s launch was the first of two ‘stable configuration’ test flights, which is Blue Origin say they are not making any changes from now until the next flight that is set to happen six weeks from now. 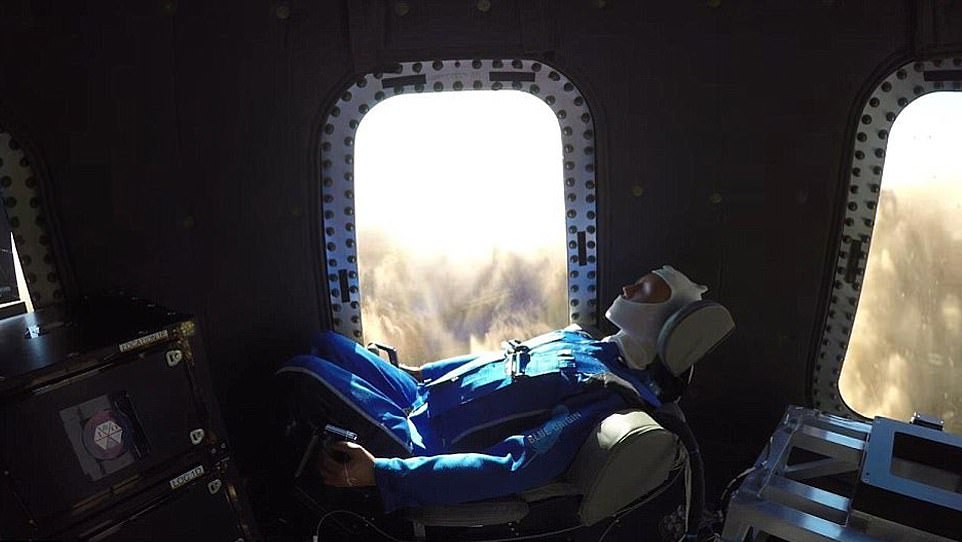 The life-sized flight dummy sat in one of the six crew capsule seats to measure the vehicle’s overall performance during test flights. Pictured is a shot from a 2017 launch 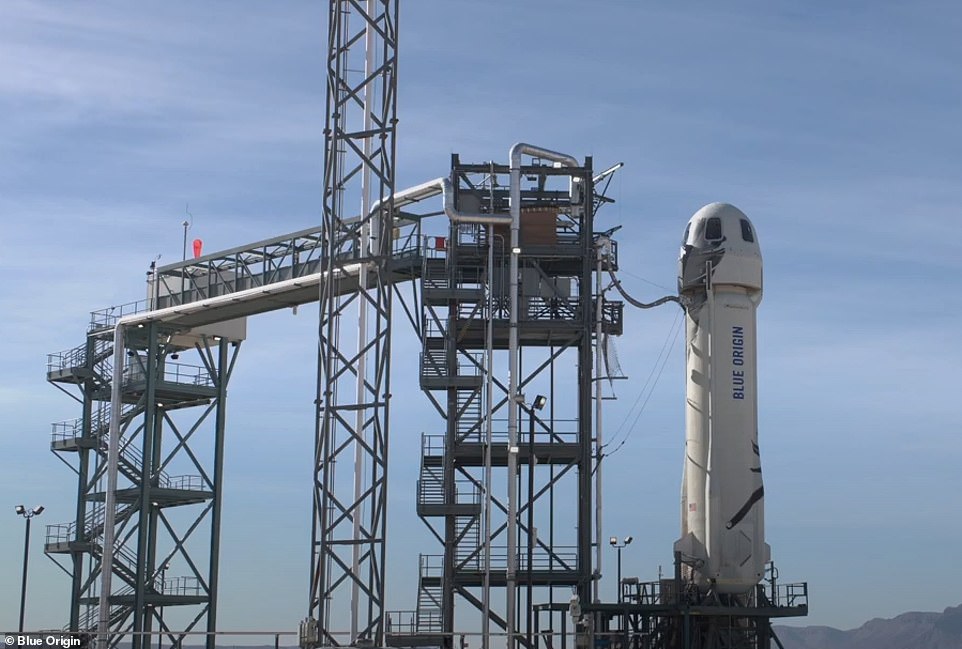 New Shepard waiting on the launch pad in West Texas

The 15th flight of New Shepard, according to sources, will focus on loading and unloading crew members – but they say it is also an ambitious one.

The person said Blue Origin still needs to complete the necessary software  and the firm does not see it being done until late March or April.

Regardless, the firm’s 14th test flight on Thursday was a success.

It was a sunny day in West Texas when New Shepard ignited its engines, releasing a stream of fire and smoke from the base.

It was a sunny day in West Texas when New Shepard ignited its engines, releasing a stream of fire and smoke from the base

The rocket took off for the sky and when it reached some 300,000 feet above the surface, the capsule detached and floated into orbit.

New Shepard landed safely on the ground about seven minutes after takeoff, followed by the capsule shortly after.

‘The upgrades include improvements to environmental features such as acoustics and temperature regulation inside the capsule, crew display panels, and speakers with a microphone and push-to-talk button at each seat,’ the company said in a blog post.

‘The mission will also test a number of astronaut communication and safety alert systems.’

The rocket was initially designed for space tourism, which aims to bring up to six passengers to the edge of space and float in orbit for 10 minutes. 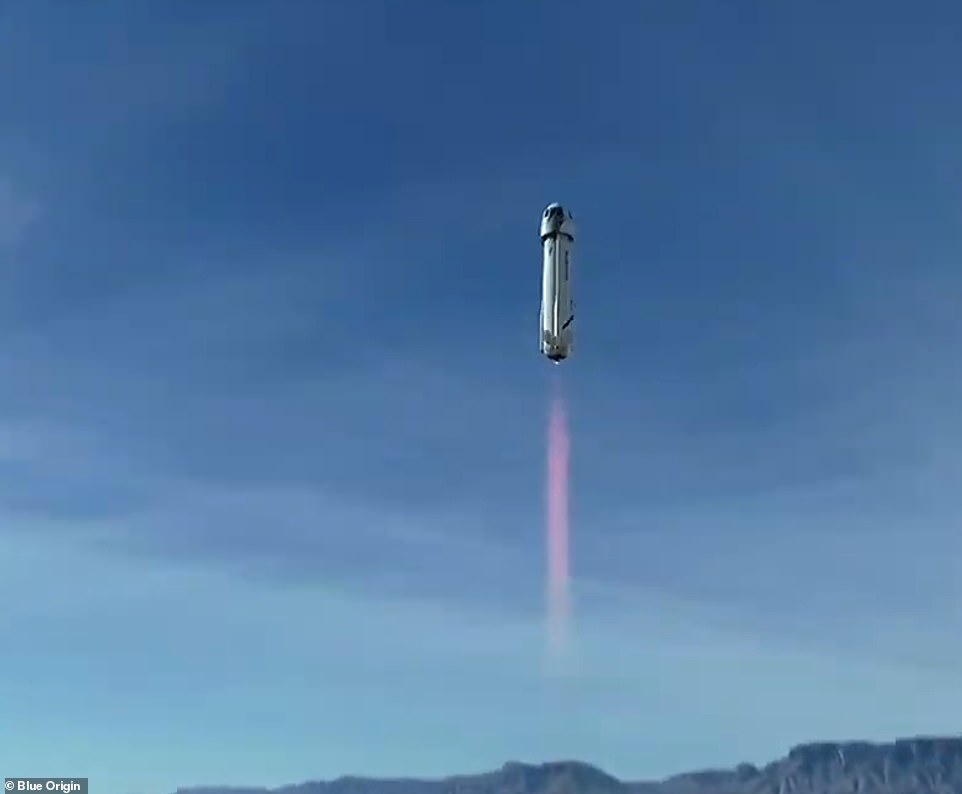 The mission sent the capsule to the boundary of space, which will one day take tourists for $200,000 a seat 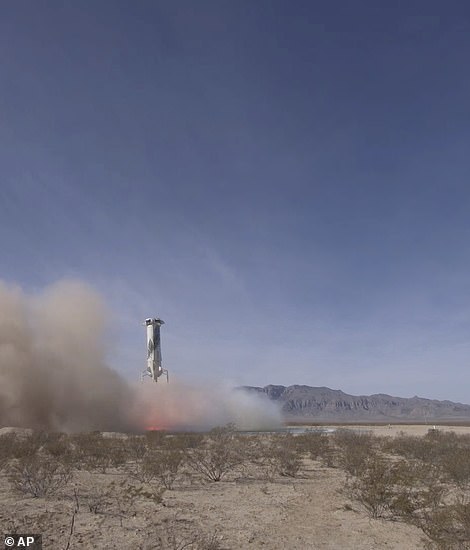 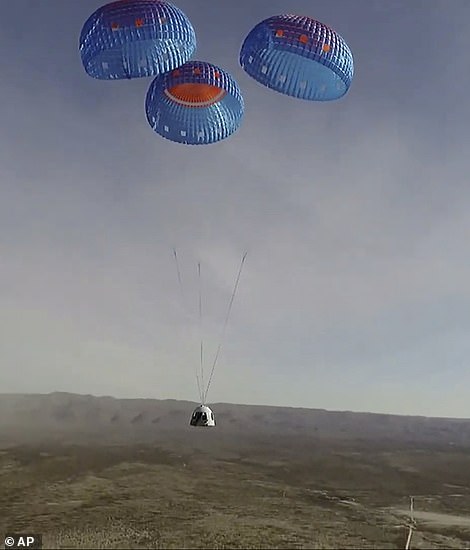 New Shepard landed safely on the ground about seven minutes after takeoff, followed by the capsule shortly after

Blue Origin is making strides in the space business and NASA took notice last month when it named the firm’s New Glenn rocket as a potential provider for scientific missions.

Blue Origin was awarded a NASA Launch Services (NLS) II contract that allows its 310-foot tall reusable rocket to launch a range of satellites into orbit and make supply runs to the ISS.

The announcement allows the American space agency to place orders with Blue Origin starting June 2025 through the end of 2027.

New Glenn has yet to take off into space – it is set for its first launch sometime this year.

Blue Origin also says the system will use the massive reusable rocket to provide access to the moon and is part of the firm’s broader mission that aims to one day send one million people to live in space.

Brazil .. The collapse of the health system in Manaus in the face of Corona

Gordon Ramsay reveals son Jack, 20, has joined the Marines in a series of celebratory family snaps

Jimmy Floyd Hasselbaink calls on Tammy Abraham to ‘step up’