Bodybuilding mother stuns TikTok with her bulging muscles and six-pack

A rising TikTok star has stunned her fans by sharing photos of her ripped bodybuilder parents, but it’s her muscular mother that has their jaws dropping.

Delaney Short, 17, from Virginia, took to the video-sharing platform to share footage of herself taking a mirror selfie followed by a slideshow featuring pictures of her mother, Becky, and father, Brandon.

‘Go ahead… cheat on me,’ she captioned the clip, which has been viewed more than 14.5 million times since it was posted on September 21. 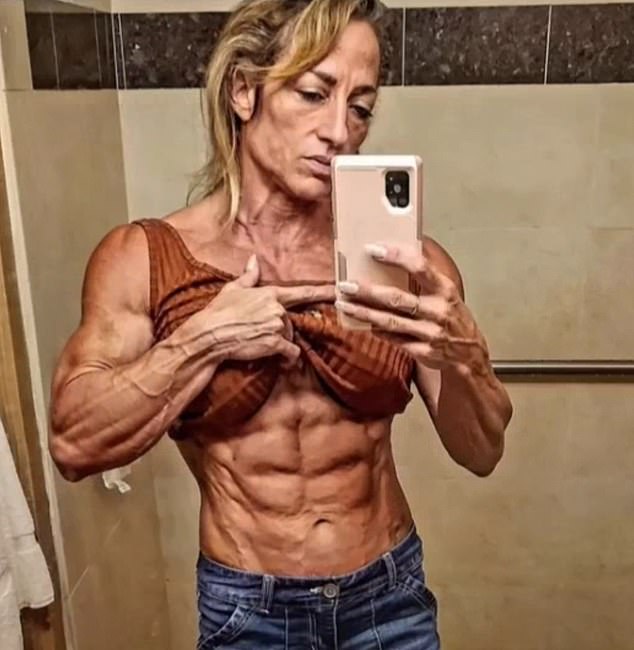 Ripped: Delaney Short, 17, from Virginia, stunned her TikTok followers when she shared a slideshow of photos of her bodybuilding mother, Becky (pictured) 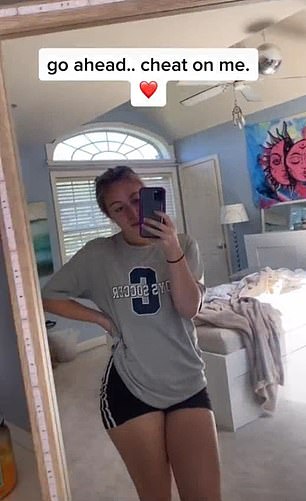 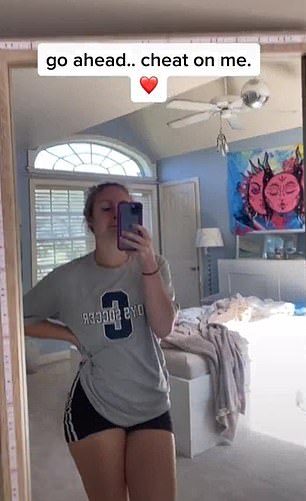 Viral: The video is part of a new TikTok trend in which users are daring people to ‘cheat’ on them while sharing photos of their most intimidating family members

The video is part of a new TikTok trend in which users are daring people to ‘cheat’ on them while sharing photos of their most intimidating family members with Kendrick Lamar’s ‘Humble’ playing in the background.

Delaney’s version is one of the most popular, and it’s easy to see why. Both her mother, a national level National Physique Committee competitor, and her father are ridiculously muscular.

The slideshow of her parents starts with pictures of her 48-year-old mom on stage at a competition followed by images of her flashing her pecs and six-pack abs.

Her 47-year-old dad, Brandon, is next up, and in his snapshots, he can be seen flexing and showing off his arm muscles in skimpy tank tops. 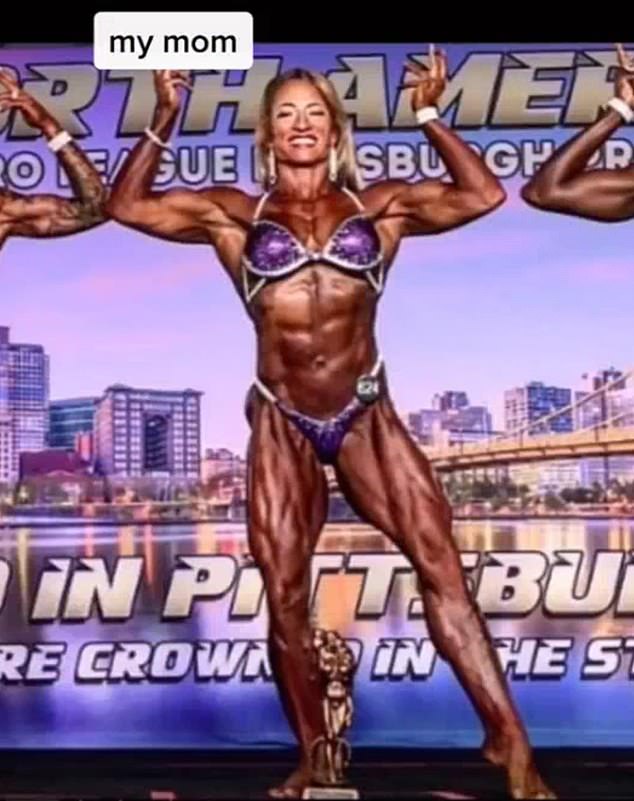 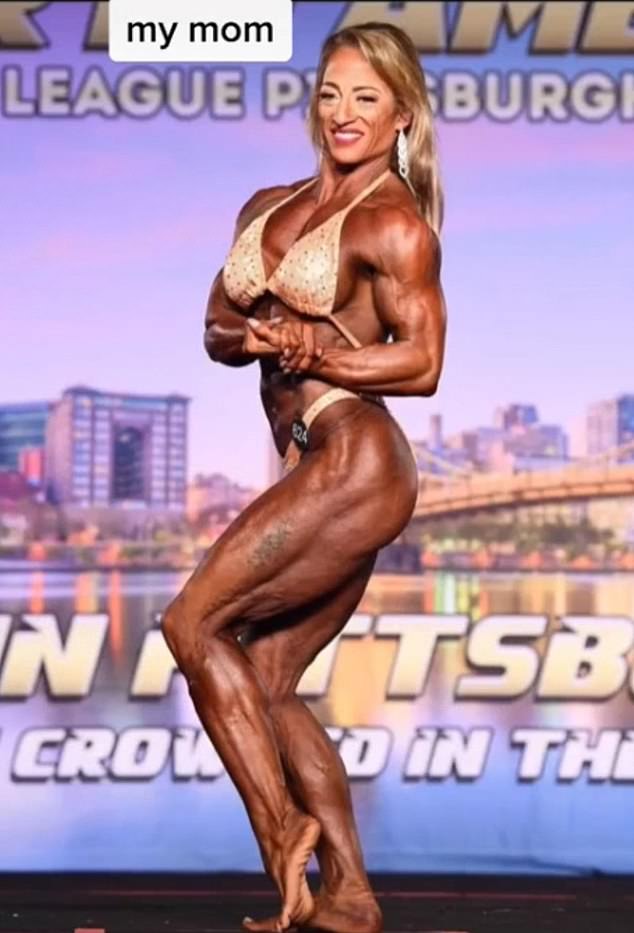 It’s the look: Delaney explained in the comments that her mom has to get spray tan before every competition 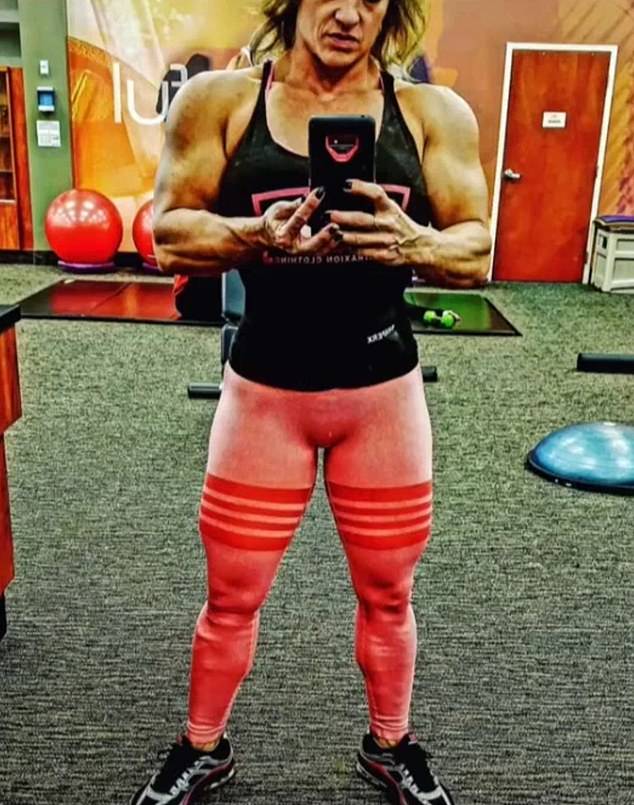 All muscle: There isn’t one part of Beckys body that isn’t perfectly chiseled

There also pictures of him with his friends, including Kevin and Keith Hodge, the conservative comedy duo known as the Hodgetwins.

‘The mom has more muscle than all the Sway Boys combined,’ one person commented, while another added: ‘Girl I — I won’t even approach you.’

‘Yea this one right here probably the scariest,’ someone else noted.

Delaney addressed comments about her mother’s changing skin tone, explaining it was because of her spray tan. 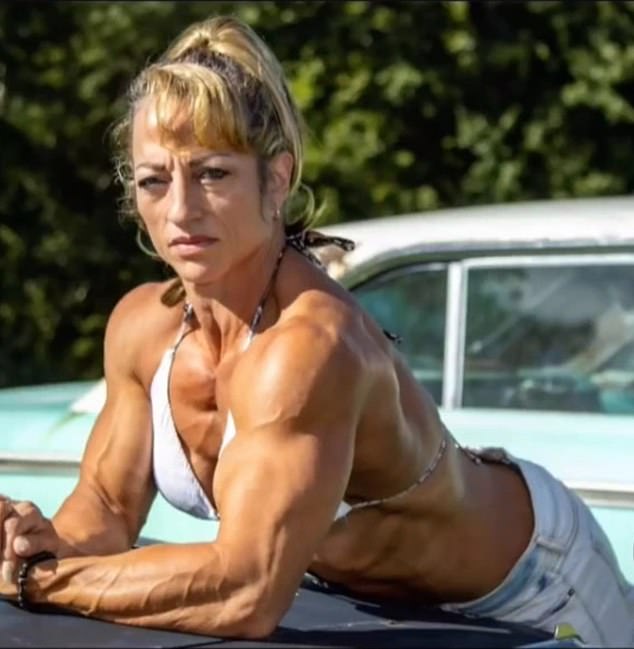 Built: The mom has veins bulging out of her arms and legs because she is so ripped 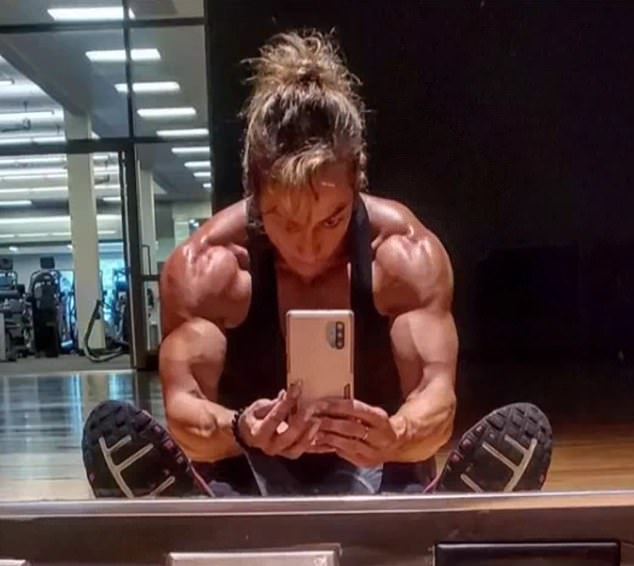 Variety: Delaney’s photos show her mom posing and snapping selfies at the gym 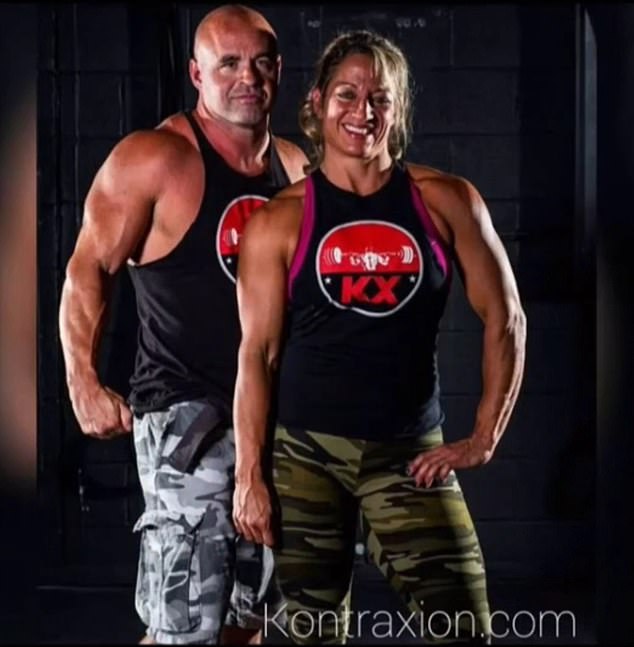 They’re both ripped! The teen also posted photos of her 47-year-old father, Brandon, in the clip 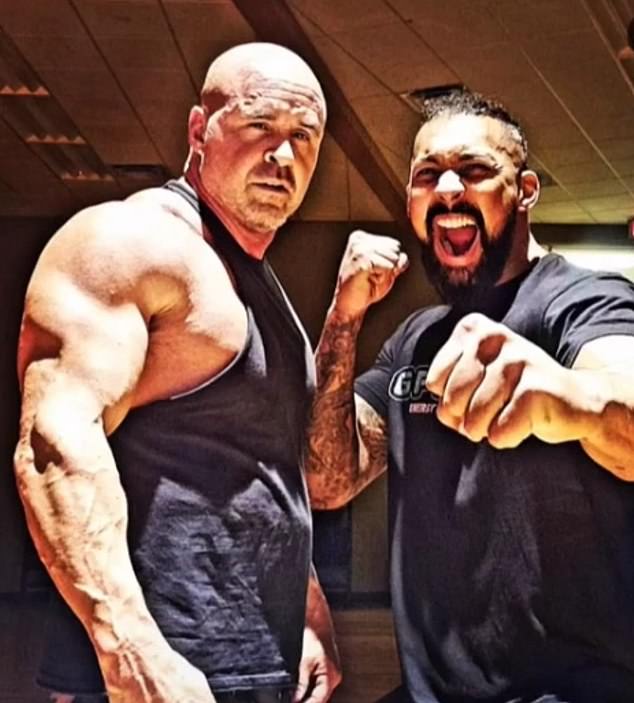 Not having it: Delaney shut down TikTok users who accused her parents of taking testosterone to build muscle

‘All bodybuilders have to get a spray tan before they get on stage,’ she said. ‘It makes them look more defined and less washed out.’

She also shut down TikTok users who accused her parents of taking testosterone to build muscle.

Delaney, who has 1.1 million TikTok followers and 145,000 Instagram followers, often features her mother and father in her viral videos. 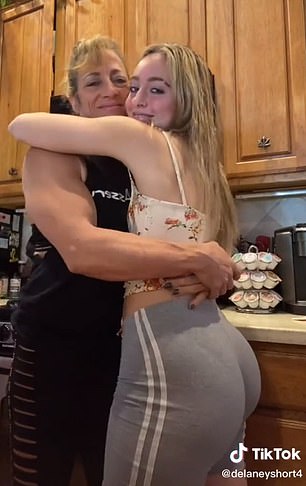 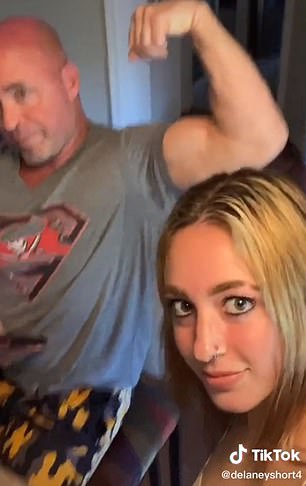 Proud daughter: Delaney often features her mother and father in her viral videos 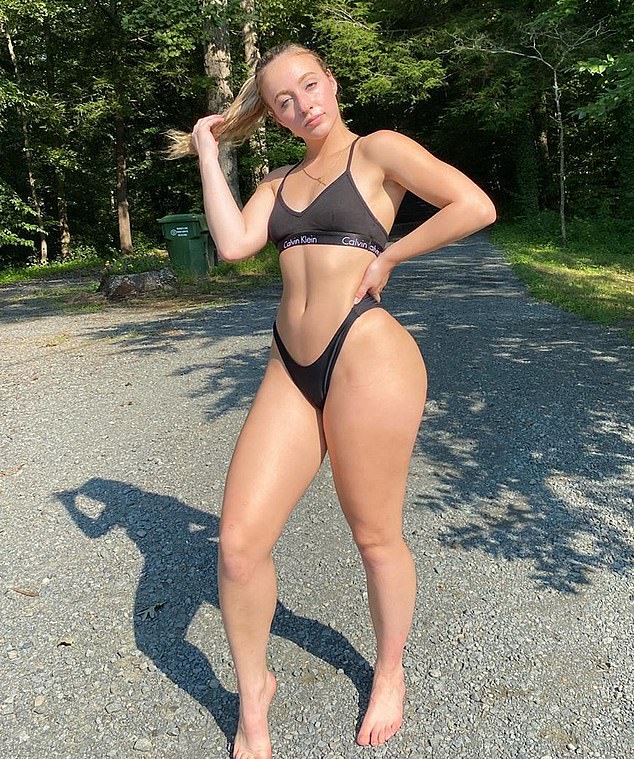 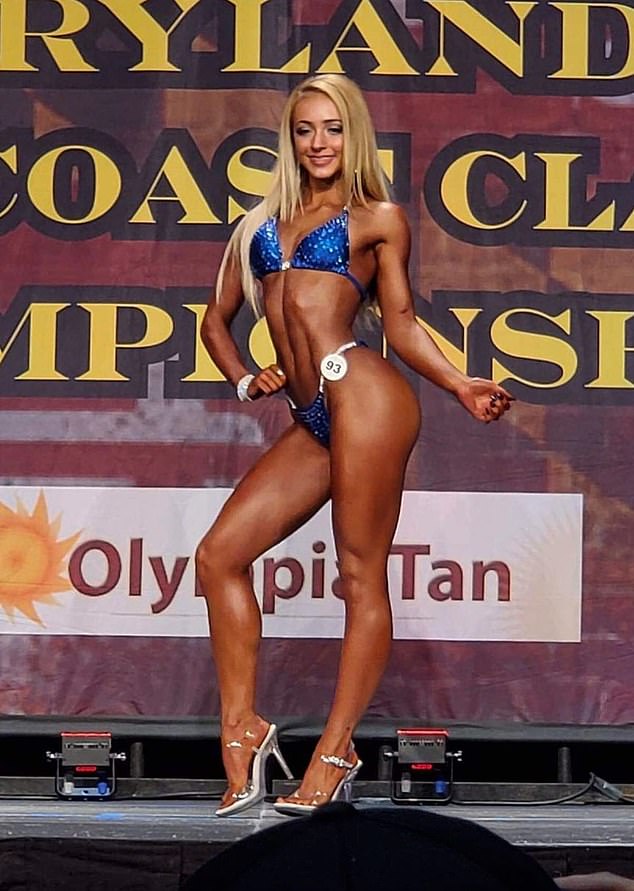 Just like mom and dad! In June 2019, Delaaney competed in her first competition (pictured) and took first place in her age division

She is no stranger to striking a pose, and it turns out she is also following in her parents’ footsteps as a bodybuilder.

In June 2019, the social media star competed in her first competition and took first place in her age division. She shared photos of herself on stage while thanking her mother for all of her help.

‘Won first place in my age group after 6 months of dieting, 6 months of training, and 6 months of not giving up! Won 3rd place in true novice (all age groups) as a first time competitor as the youngest person on stage,’ she wrote.

‘I have to say I had to cry a little after I got off stage and had to thank my posing coach who’s been there for me so much @skylarlanier_ifbbpro and thank you to my mom that I am so proud of that worked the absolute hardest of anyone I know!’ she added.

‘Know you will always be my inspiration and always a champion in my mind.’

Coronavirus: What part could rapid antigen tests play in the fight against COVID-19?