Boris Johnson is struggling to contain a fresh Tory meltdown today as MPs accused him of broken promises after key ‘Levelling Up’ plans were downgraded in a £96billion rail package.

Conservatives joined a brutal backlash as the PM went into bat for the ‘ambitious and unparalleled’ overhaul of inter-city links.

But the HS2 route to Leeds is being axed in favour of a Birmingham to East Midlands Parkway line. And the HS3 line linking Manchester and Leeds – known as Northern Powerhouse Rail – is being ditched.

On a visit to a Network Rail hub in Yorkshire, the PM rejected as ‘rubbish’ claims that the changes break the ‘Levelling Up’ pledges in Tories’ 2019 manifesto.

He argued that high speed rail was ‘grindingly slow to build’ and most of the benefits could be achieved more quickly.

However, Transport Select Committee chair Huw Merriman said: ‘The PM promised that HS2 and Northern powerhouse Rail was not an ”either or” option. Those in Leeds and Bradford will be forgiven for viewing it today as neither.’

The Conservative MP swiped: ‘This is the danger in selling perpetual sunlight and then leaving it to others to explain the arrival of moonlight.’

Downing Street will be worried about the fallout compounding huge unhappiness within Tory ranks over the handling of the Owen Paterson lobbying case and ensuing sleaze chaos.

Mr Johnson was forced into a humiliating mea culpa to his backbenchers at a 1922 committee meeting last night, admitting he had ‘crashed the car’ – although he again stopped short of apologising.

A Survation poll is among the latest to show damage to the Conservatives from the row, with a previous four point lead over Labour wiped out. Many Tories MPs are also livid at a ‘knee jerk’ push to curb outside earnings in the wake of the sleaze row, which is widely regarded as impossible to enforce.

‘And, of course, there are going to be people who, you know, always want everything at once. And there are lots of people who’ll say, ‘look, what we should do is carve huge new railways through virgin territory, smashing through unspoilt countryside and villages, and do it all at once’.

‘The problem with that is those extra high-speed lines take decades and they don’t deliver the commuter benefits that I’m talking about.

‘We will eventually do them.’ 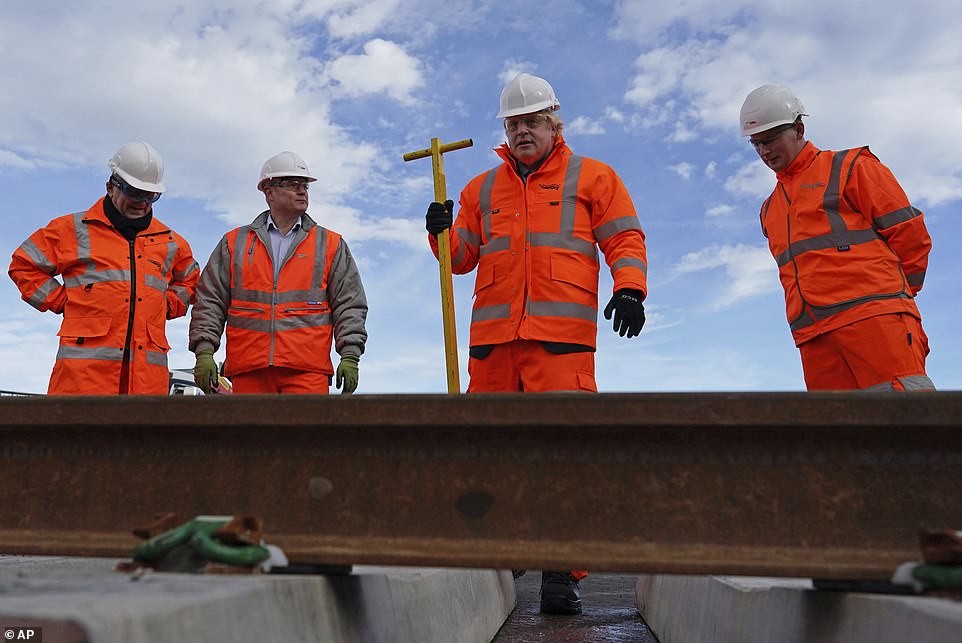 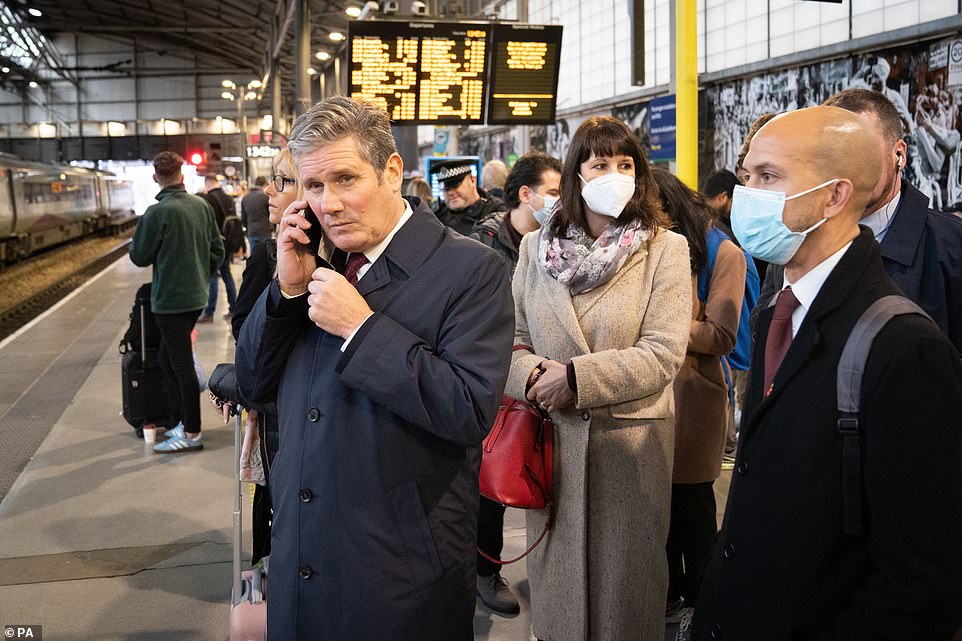 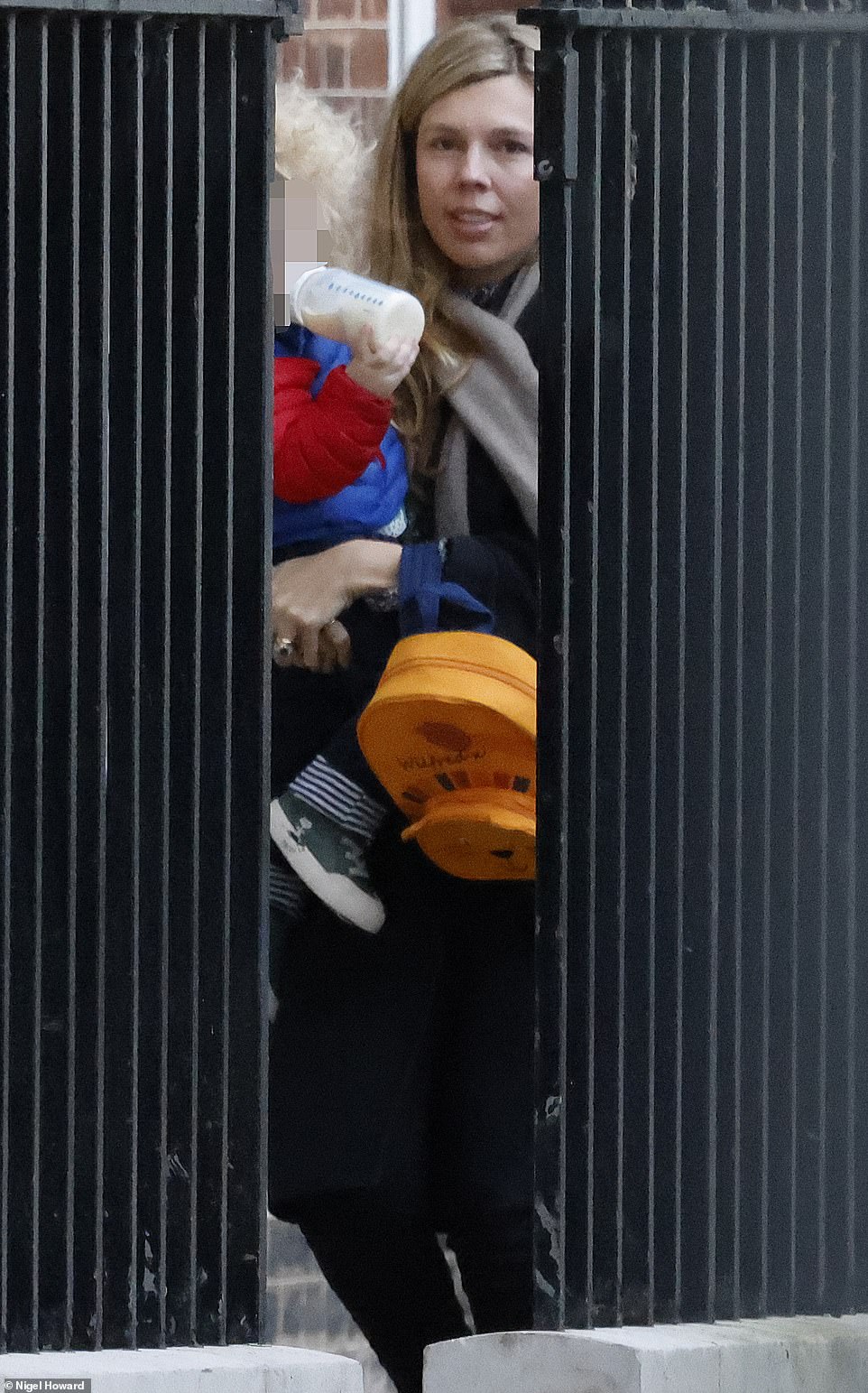 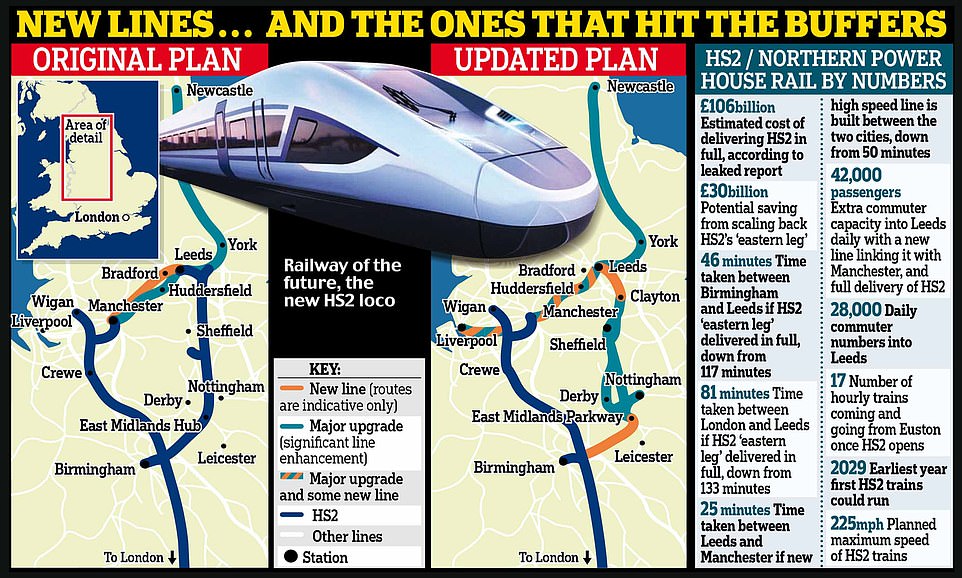 Boris Johnson is facing mounting Tory unrest over ‘unforced errors’ today as a poll found nearly two-thirds of the public believe he should apologise for the Owen Paterson shambles.

The PM delivered a mea culpa to his own MPs last night admitting he ‘crashed the car’ with the extraordinary bid to save the ex-minister by pausing the Commons standards regime.

But research by Redfield & Wilton Strategies for MailOnline found that 63 per cent of the public think he should have said sorry – something he has pointedly refused to do.

Despite the government’s 80-strong majority, there are growing signs of discontent on the Conservative benches at the premier’s record of blunders and U-turns – which seems to be starting to hit support among voters.

There appeared to be a thin Tory attendance at the weekly PMQs session yesterday, which is usually an opportunity for raucous shows of support.

And not all MPs turned up last night for votes on triggering a process of reform for rules on conduct and second jobs, which many politicians regard as ‘knee-jerk’ and impossible to implement.

The key points of the Integrated Rail Plan are:

The decision to cut back HS2 will make journeys between Leeds and London 32 minutes longer than previously planned.

In the Commons, Shadow transport secretary Jim McMahon said the Government had ‘betrayed’ the North and committed a ‘great train robbery’.

‘Second, Birmingham to the East Midlands with HS2 trains continuing to central Nottingham and central Derby, Chesterfield and Sheffield on an upgraded mainline. And third, a brand new high-speed line from Warrington to Manchester and to the western border of Yorkshire – slashing journey times across the north.’

Mr Shapps said: ‘Our plans go above and beyond the initial ambitions of HS2 and Northern Powerhouse Rail by delivering benefits for communities no matter their size, right across the North and Midlands, up to 10 to 15 years earlier.’

But Robbie Moore, the Tory MP for Keighley, said he was ‘deeply disappointed’ by the plan which had ‘completely short-changed’ his constituents.

‘We are one of the most socially deprived parts of the UK and we must get better transport connectivity,’ he said.

‘I still want to see Northern Powerhouse Rail delivered with a main stop in Bradford, so that we can unlock our economic opportunities.’

Fellow Conservative Kevin Hollinrake said the impact of the decisions would be felt for ‘generations’.

The 2019 Tory manifesto said: ‘We will build Northern Powerhouse Rail between Leeds and Manchester.’

In his foreword to the Integrated Rail plan today, Mr Johnson stressed that many Red Wall constituencies would not have benefited from the HS2 extension because they would not have stopped.

‘In my discussions on HS2 last year, I was struck by what one of my parliamentary colleagues, Lee Anderson MP, told me: that his constituents in Ashfield would have to watch the high speed trains go through at 200mph without stopping when what they really wanted was a decent bus service to the next town,’ Mr Johnson wrote.

He also admitted that ‘Covid-19 has altered some of the assumptions on which these schemes were designed’.

‘Some have demanded that we rigidly stick to the old plans, however long they take, however much they cost and whoever they leave behind,’ the premier said.

‘Some have pre-emptively denounced any departure from those plans as a betrayal of levelling-up.

‘But those who say these things are, in effect, condemning the North and the East Midlands to get nothing for ten years or more. Levelling up cannot wait that long.’

The package will see high-speed trains travel on slower track to Sheffield, meaning HS2 trains would reach Yorkshire but the high-speed line itself would not.

Less than half of the total cost declared today – £40billion – will be new funding because the package includes most of the cost of HS2 from London to Crewe – money already announced.

That is much less than would have been spent had the Government gone ahead with its original plans.

Keir Starmer said the scrapping of part of the HS2 extension shows that ‘levelling up’ is ‘just a slogan’.

During a visit to a station in Bradford, the Labour leader said: ‘You don’t have to drill down very long into that £96 billion sum to realise a good deal of that is money already spent on the bit of the line that comes up to the Midlands, so that argument doesn’t hold water.

‘As for the improved speed of times, of course that’s a good thing, but if you don’t have a new line you don’t sort out capacity and that’s the biggest problem we’ve got across the North.

‘So that is, I’m afraid, just the tactics of trying to ensure that focus isn’t on what’s really happened here, which is the breaking of two very, very important pledges.

‘If you can’t level up in Bradford then the whole levelling-up agenda is seen for what it really is, and that is just a slogan.’

Henri Murison of the Northern Powerhouse Partnership said: ‘We won’t be hoodwinked into believing we’re getting £96billion for a transport revolution in the North.

‘Phase 1 of HS2 accounts for half of that and only goes as far as Birmingham. In addition, half the HS2 budget on the eastern leg has disappeared altogether.’

During a round of interviews this morning, Deputy PM Dominic Raab insisted the Government’s rail plans were ‘win-win’ and any changes would help deliver more value for money.

He declined to confirm the specifics but told BBC Breakfast: ‘The detail will be set out today but I think this is win-win.

‘It’s never been done before, £96 billion, there’s never been an infrastructure project or series of projects on this scale.

‘We’re delivering action to go with the words and the aspirations around us.’

The revised plans will focus on upgrading existing lines to cut journey times in the North and Midlands, with some new track laid.

The Government last night insisted journey times would be ‘the same, similar to or faster’ than the original HS2 and Northern Powerhouse Rail plans. 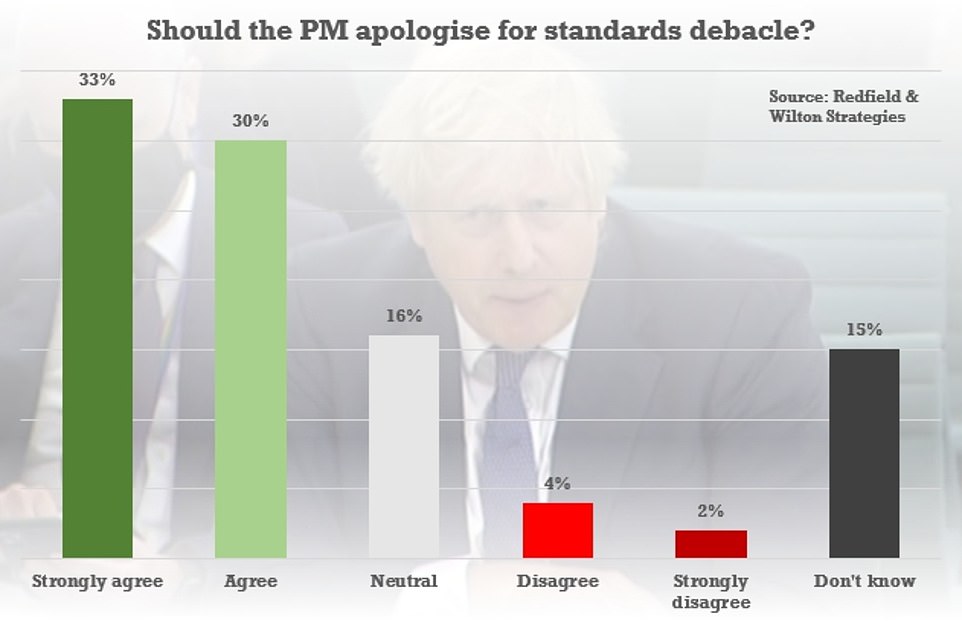 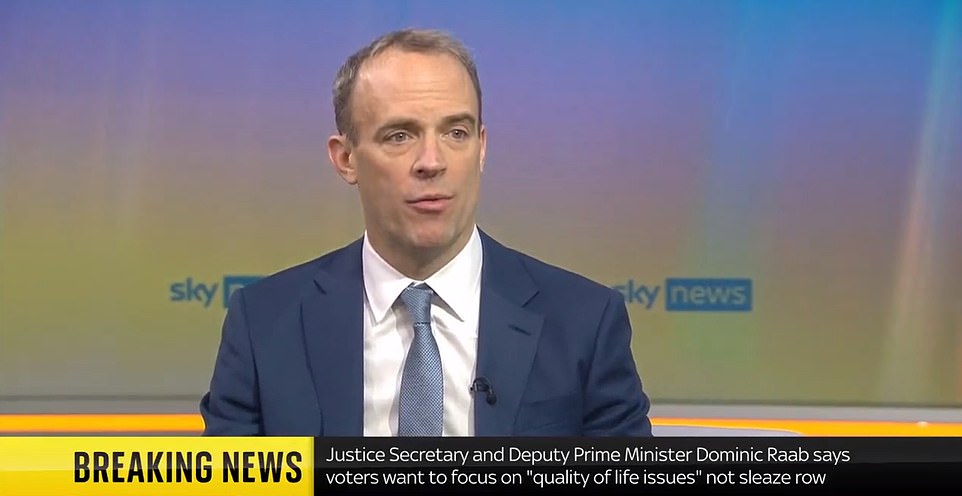 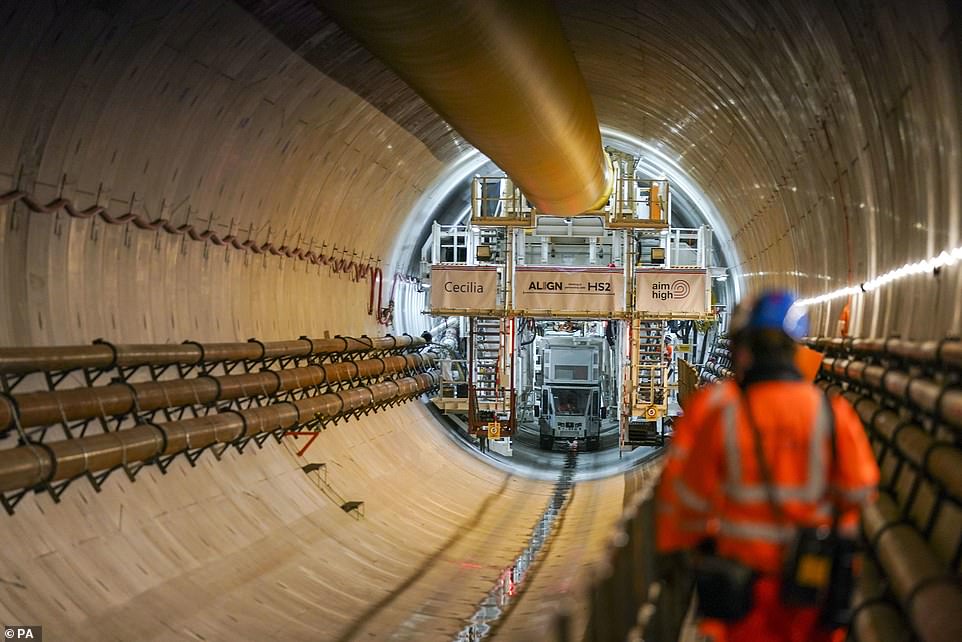 One of the two tunnelling machines at the south portal HS2 align compound, in Rickmansworth, Hertfordshire. The Government has said journey times would be ‘the same, similar to or faster’ than the original HS2 and Northern Powerhouse Rail plans 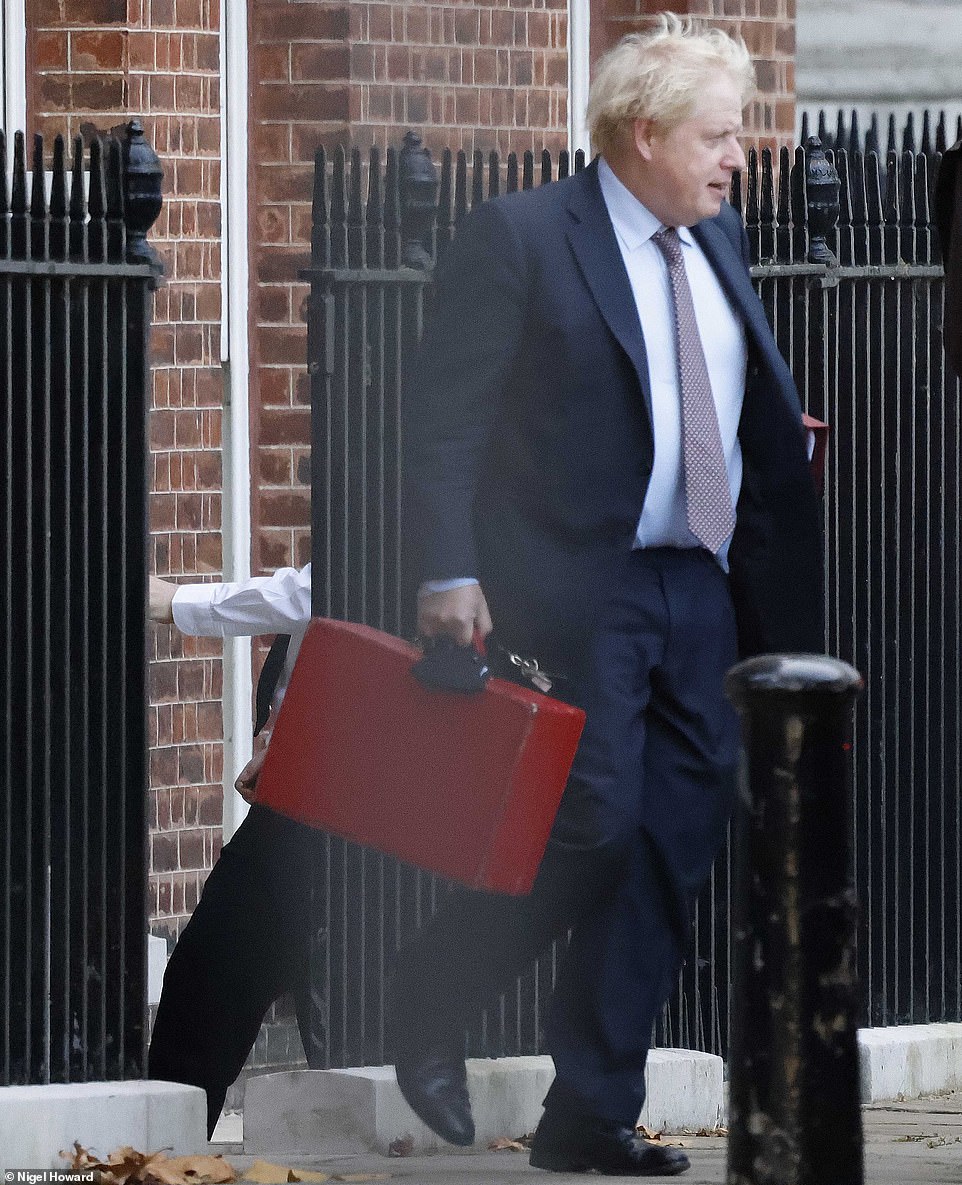 It said better east-west connections between major cities in the North and Midlands would also be achieved up to ten years sooner.

Mr Johnson said: ‘If we are to see levelling up in action now, we must rapidly transform the services that matter to people most.

‘That’s why the integrated rail plan will be the biggest transport investment programme in a century, delivering meaningful transport connections for more passengers across the country, more quickly – with both high-speed journeys and better local services, it will ensure no town or city is left behind.’

Journey times between Manchester and Leeds could still be cut to about half an hour from 50 minutes.

The original plans would have cut them to about 25 minutes. Ministers also say travel times from Birmingham to Nottingham will be cut from 72 minutes to 27, and Birmingham to Manchester from 90 to 40 minutes.

But figures drawn up by the National Infrastructure Commission suggest much less capacity will be created.

Space for up to around 21,000 extra commuters into Leeds will be created under the plans, compared with up to 42,000 originally. Bradford will see a similar drop in capacity.

Lord O’Neill, former Conservative minister and vice chair of the Northern Powerhouse Partnership, told Times Radio that ‘Bradford is being excluded’ after it was revealed it was expected the HS2 extension plans to Yorkshire would be scaled back.

It is expected the HS2 extension will not serve Leeds and Sheffield.

Lord O’Neill said: ‘It seems like a strange political and economic risk-reward calculation here because from what the team at the Powerhouse Partnership have figured out, all of this on that part of it would only save less than £4billion out of what was previously £39billion.

‘So, 10 per cent saving to disappoint millions of people around the north and, crucially, people in redwall seats and their MPs.’

Labour’s transport spokesman Jim McMahon said: ‘It’s laughable that the Government expects people in the North to be grateful for some half-baked and repackaged plans, as they attempt to quietly back out of promises made on the vital major infrastructure projects those communities need so badly.

‘Failure to deliver on HS2 and Northern Powerhouse Rail – schemes ministers have committed to dozens of times – is not only insulting, it is actively holding back investment and opportunity that could benefit millions.’

Do you fall from a high and frightened place? Interpretation of the most famous 5 disturbing dreams from the point of view of psychology