Boris Becker used a company account like his ‘personal piggy bank’ to pay for his children’s school fees as he ‘hid millions of pounds worth of assets after going bankrupt’, a court heard today.

The former world number one, 54, also spent hundreds of pounds at luxury department store Harrods, bought online groceries at Ocado and treated himself to Ralph Lauren clothes, a jury heard.

He is charged with 24 offences under the Insolvency Act relating to his June 2017 bankruptcy over a £3.5 million loan from private bank Arbuthnot Latham for a property in Mallorca, Spain.

It is alleged Becker, who commentated at Wimbledon last year, put money in the accounts of a company in his own name, and then later sent some money to his former wife Barbara Becker, a friend and estranged wife Sharlely ‘Lilly’ Becker.

The German national is also alleged to have hidden 1.13 million euros (around £950,000) from the sale of a Mercedes car dealership he owned in Germany, which was paid into his Boris Becker Private Office (BBPOL) account.

The High Court in London imposed restrictions on Becker’s finances for the next decade as the Insolvency Service raised concerns over ‘undisclosed’ transactions in 2017.

The six-times tennis Grand Slam winner, who won Wimbledon three times over his career, also allegedly failed to declare two German properties, and hand over trophies such as his Wimbledon men’s singles titles.

He denies all the charges and told bankruptcy investigators that he had no idea that he owned a house ‘for decades’ in Germany and ‘cannot recall’ where nine of his biggest trophies and medals are. 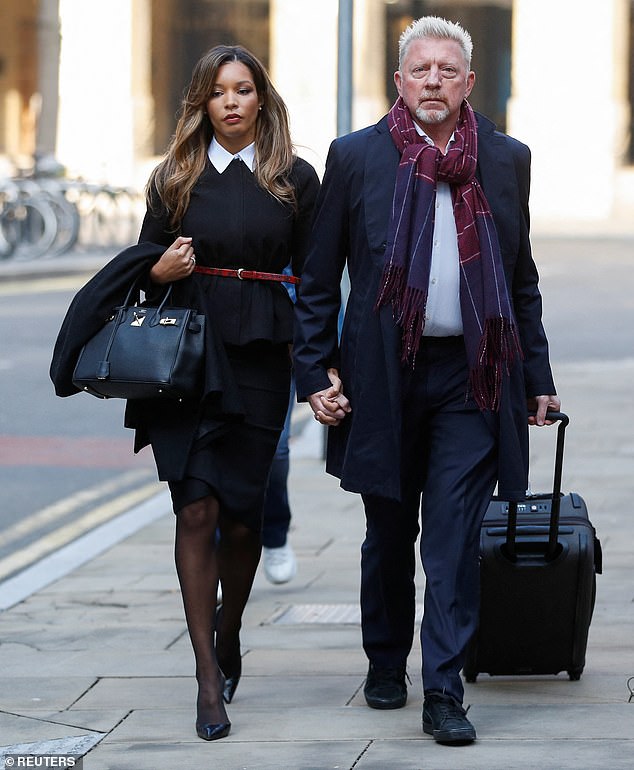 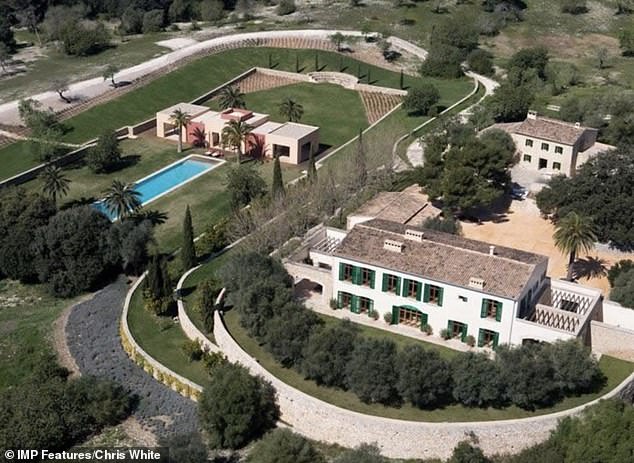 He is on trial at Southwark Crown Court charged with 24 offences under the Insolvency Act relating to his June 2017 bankruptcy over a £3.5 million loan from private bank Arbuthnot Latham for a property in Mallorca, Spain, pictured 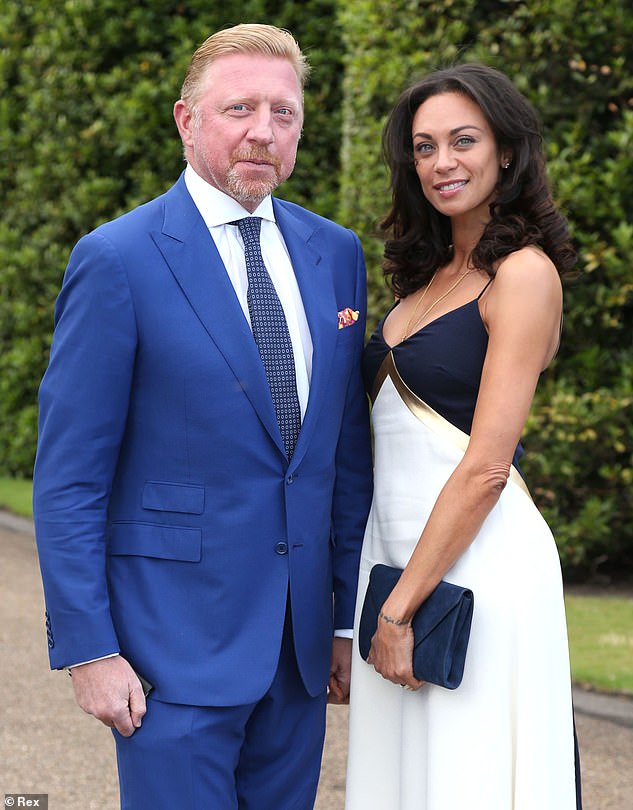 Becker allegedly hid the proceeds from the sale of a £3million car dealership by transferring money to his second wife Sharlely ‘Lilly’, who he separated from three years ago. Pictured, Becker and Sharlely in 2015 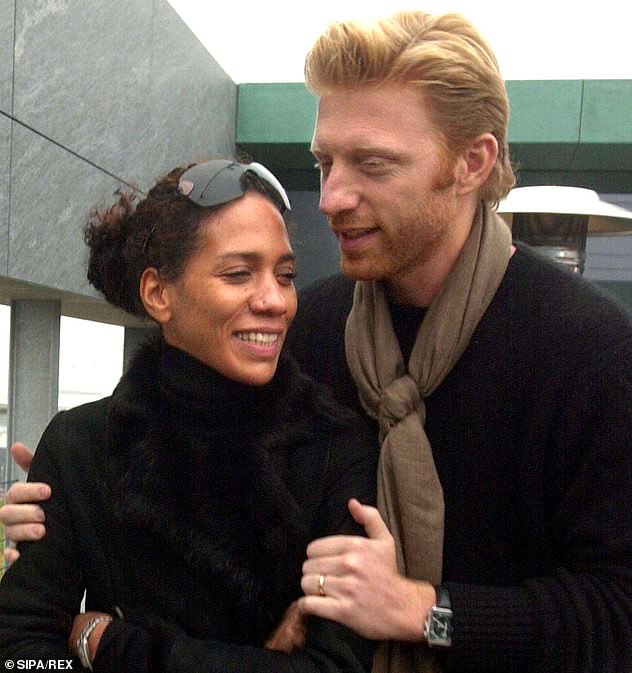 Tennis ace Becker hid money away by sending huge sums to his first wife Barbara (pictured together in 2000), it is alleged

Prosecutor Rebecca Chalkley said today: ‘It is the prosecution case that Mr Becker used the BBPOL sterling account as an extension of his own account, effectively as his own piggy bank, for everyday personal expenses such as school fees for the children and such like.’

He also transferred 300,000 euros (£249,000) to his own account, while other funds went into an account he jointly held with his son Noah, the court heard.

Becker is also accused of failing to hand over assets including trophies such as the 1985 and 1989 Wimbledon men’s singles title, his Australian Open trophies from 1991 and 1996 and his 1992 Olympic gold medal.

His mother had his Wimbledon 1986 trophy at her house and trustees issued an appeal for anyone who held any of his other trophies to come forward and declare them after Becker had forgotten where they were.

The prosecutor Ms Chalkley said Becker was further charged with not providing or ‘delivering up’ nine trophies he won over his sports career.

She added: ‘Mr Becker has not delivered up to the trustees the trophies that are his most important and valuable, historically and financially.

‘Mr Becker has asserted throughout that he does not know where these items are and he is deliberately withholding them from the trustees and estate.’

‘His mother confirmed she had the 1986 trophy and consequently the 1986 trophy does not form part of the charges. It was gifted to her so it was no longer part of his estate.’

She also said trustees issued a press release to say that ‘Mr Becker had forgotten the location of any of his major trophies and if whether anyone had any idea of his location they should contact the trustees.’

Becker, who won 49 singles titles out of 77 finals during his 16 years as a professional tennis player, is being supported in court by his partner Lilian de Carvalho Monteiro. 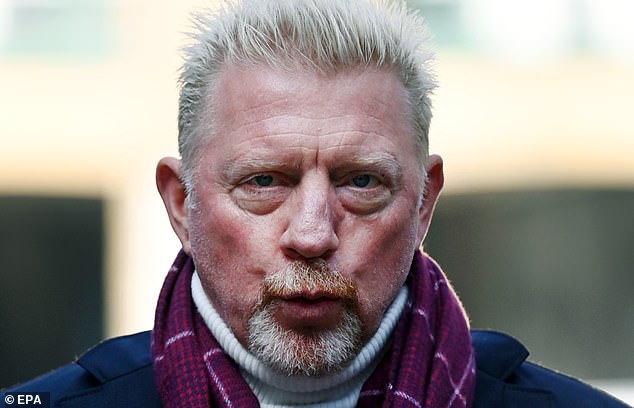 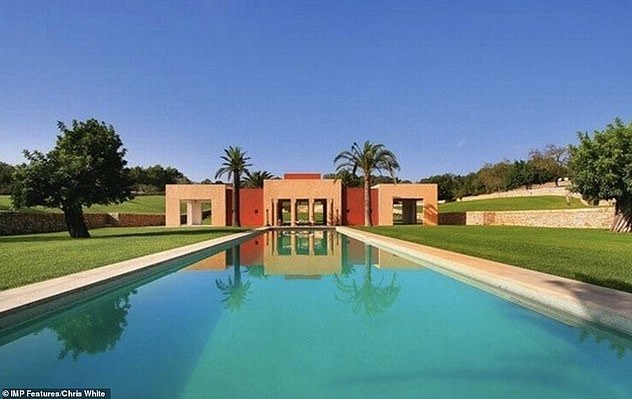 The 54-year-old commentator was declared bankrupt in June 2017 after borrowing around £3.5 million from private bank Arbuthnot Latham for this property in Mallorca

Prosecutor Chalkley, on behalf of the Insolvency Service and business secretary Kwasi Kwarteng, added: ‘It is the concealment that the defence denies.

‘The prosecution case is that Mr Becker had the money which was owed personally to him paid into the BBPOL intentionally so it was not visible, or rather hidden, from trustee of the bankruptcy estate Mark Ford.’

She continued: ‘The ingredients of the offence are agreed. The bit disputed, and what the prosecution has to prove, is that it was deliberate to essentially move the monies away for purposes of concealment.’

The prosecutor also explained that just under 500,000 euros was sent to his ex-wife Barbara, his current wife at the time, Lilly, and a friend.

Ms Chalkley said: ‘He did not disclose the sale of the money until that money was already gone.

‘It was lost to the estate and to the creditors. It is the prosecution case that Mr Becker did this deliberately. 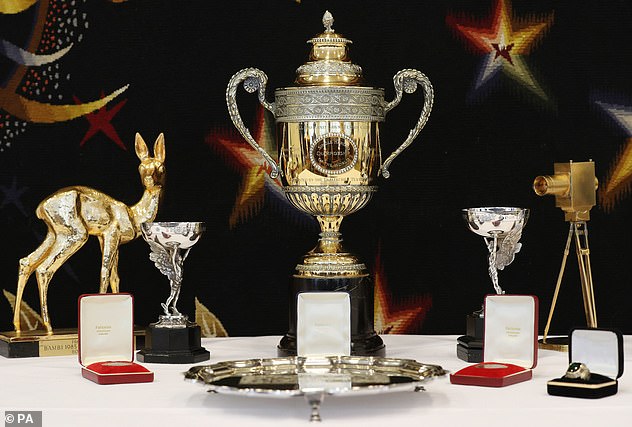 A selection of trophies, awards, and memorabilia from the tennis career of Boris Becker. Becker is accused of failing to hand over trophies from his glittering career to settle debts 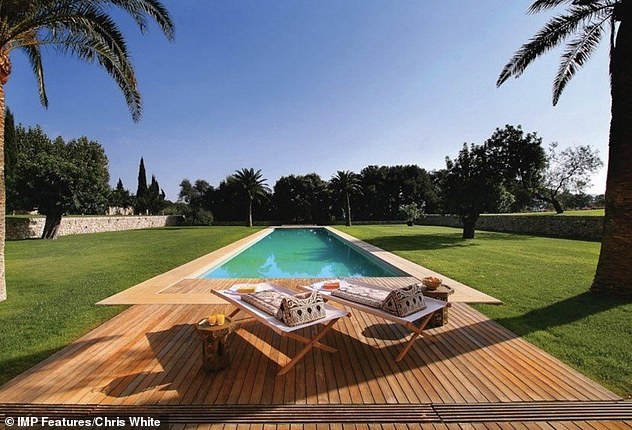 Becker manipulated the bankruptcy system by hiding millions of pounds of assets and his Wimbledon trophies to avoid paying back a £3.5million loan for this Mallorca villa, the court heard

Investigator Mark Ford discovered a property Nublocher Strasse 51, in Leiman, Germany and found a copy of the tenancy agreement and mortgage agreement in November 2017.

The prosecutor said an advisor told Mr Ford that Becker claimed he thought it was owned and operated by his mother.

She said: ‘On 5 November 2017, [an advisor] emailed Mr Ford saying the property is owned by Mr Becker and did not know that his parents put his property into his name.

‘He thought it was done when he was underage and when his parents managed his funds.

‘[The advisor said] Mr Becker had investigated the situation and that he wishes to prevent it from being put up for public auction.

‘On 11 November, it was later claimed that Mrs Becker [his mother] had always managed the property and it was always Mrs Becker who collected the rent.

‘This lacks credibility. Mr Becker claims he had owned a property for decades he had no knowledge of and now he is aware he wanted a third party to buy it.

‘It is the prosecution case that he was less than honest and only admitted he owned it when the joint trustee had identified that he had owned it.

‘The prosecution case is that it’s clear Mr Becker knew he owned the property and should have therefore disclosed it.

‘Any nondisclosure we say was a deliberate act to conceal it from Mr Ford and his colleagues and an attempt to stop it from being sold and distributed it to his creditors.

‘Any disclosures was only made when investigators were aware of it and the cat was out of the bag.’

Ms Chalkley also said bankruptcy investigators discovered an email chain sent from Becker to his prior advisors before he was made bankrupt or before the period on which he was ‘on notice’.

She outlined that properties relate to the luxury villa in Majorca and the German property Im Schilling.

She said: ‘The email exchange is signed BB. It is an email signed from an address of Mr Becker’s email address on it.

‘He concludes the email: ‘PS this info is strictly private between us.’ 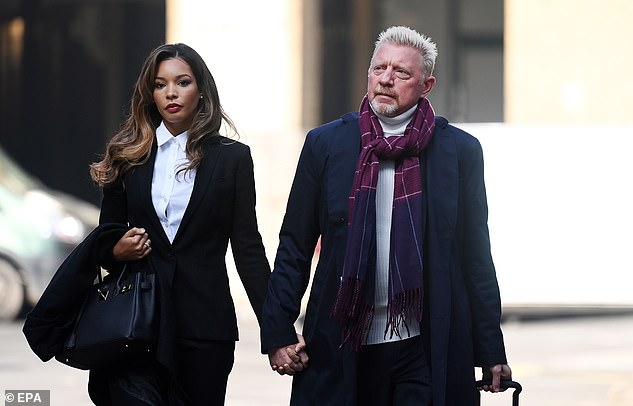 The prosecutor said: ‘When Mr Becker’s attitude is considered regarding his conduct as a whole it is the prosecution case this is a further example of Mr Becker attempting to frustrate the trustees and keep potential valuable items from the creditors.’

Becker, who now lives in an exclusive riverside apartment block in Battersea, southwest London, sat in the dock wearing a navy pinstripe suit with a white turtleneck and black Puma trainers.

In 1985, he won Wimbledon at 17 years old wearing Puma shoes and using a Puma racket.

Becker is bailed conditionally with requirements to live and sleep at his Battersea address.

He must notify the Insolvency Service, who prosecute the case, at least 48 hours before travelling abroad, including details of all countries and islands he will be visiting.

Becker, defended by Jonathan Laidlaw QC, is also required to provide his solicitors with his passport when not travelling.

NBA: The bloodiest murder in the NBA: life sentence for the man who killed Lorenzen Wright