By Eleanor Hayward, Health Reporter, For The Daily Mail 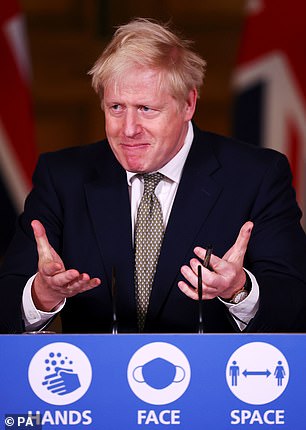 The NHS Test and Trace system ‘needs improvement’ after its performance slumped to the worst on record, Boris Johnson admitted yesterday.

Fewer than six in ten close contacts of those who test positive for Covid-19 are being reached by tracers, well below the 80 per cent target.

And figures released yesterday show that only one in seven people receive virus test results within 24 hours, the lowest on record.

The Prime Minister said: ‘I share people’s frustrations and I understand totally why we do need to see faster turnaround times and we do need to improve it.’

Sir Patrick Vallance, the chief scientific adviser, added: ‘It’s undoubtedly the case that test, trace and isolation becomes much more difficult to have an impact once numbers are high.

‘So, it’s much more effective when numbers are low. It’s very clear that there’s room for improvement.’ The figures show that in the week ending October 14, only 15 per cent of those who were tested in the community received their result within 24 hours.

This is down from 32.8 per cent in the previous week and is the lowest since Test and Trace began. 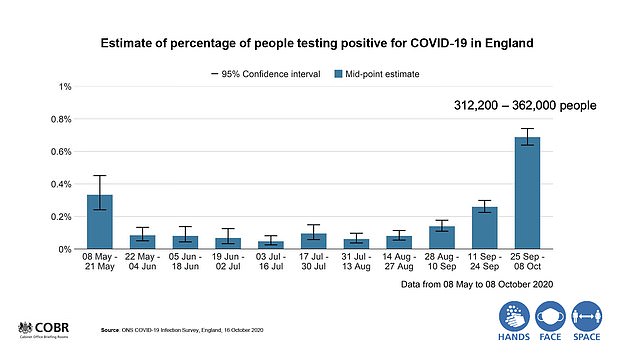 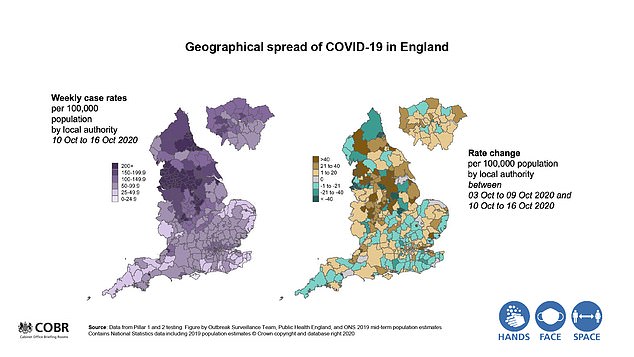 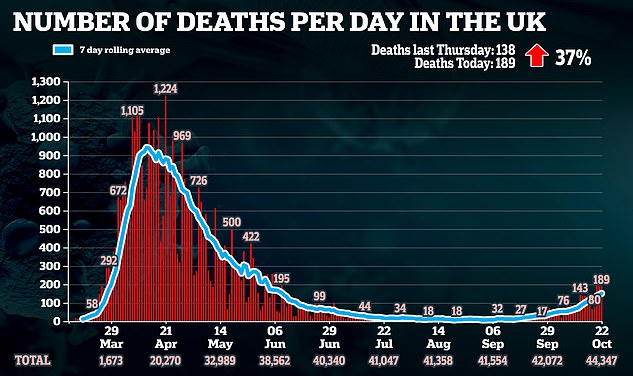 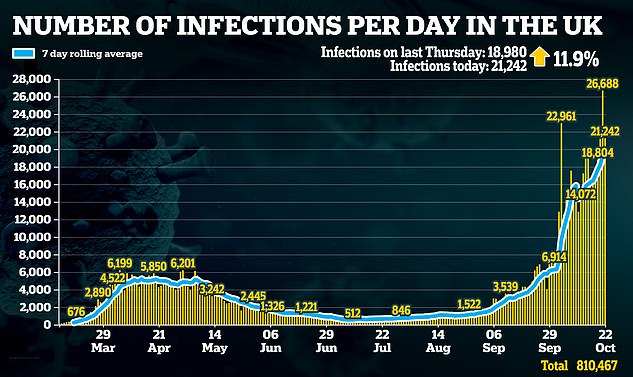 The UK today announced another 21,242 positive tests and 189 deaths

Local health protection teams are much more effective than call centres, reaching 94.8 per cent of contacts compared to 57.6 per cent. The positivity rate – the proportion of all tests returning a positive result – has climbed to 7.1 per cent for the week, the highest since Test and Trace began.

According to the World Health Organisation, a positivity rate of less than 5 per cent is one indicator that the epidemic is under control.

A total of 101,494 people tested positive for Covid-19 in England at least once in the week to October 14, a rise of 12 per cent in positive cases on the previous week. 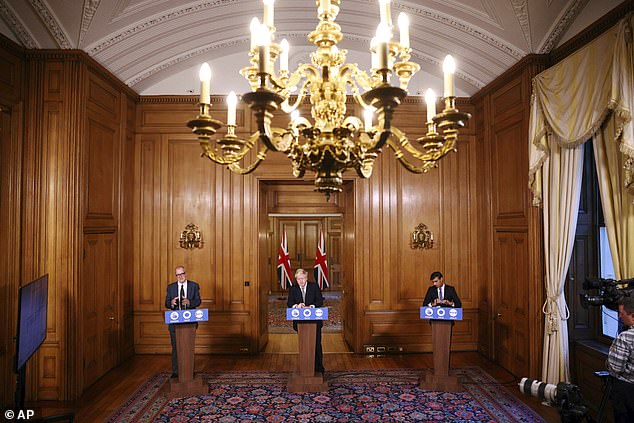 Labour health spokesman Justin Madders said it was time for ministers to admit that the private companies being paid millions to help run the system ‘aren’t up to the job’. He added: ‘To have over 40 per cent of people not even being contacted is an interstellar-sized black hole in the Government’s plan to reduce transmission.

‘How much longer are we expected to put up with this dangerous failure?

‘The need for a circuit break is critical and that time should be used to fix Test and Trace once and for all.’

Health minister Lord Bethell said: ‘We’re proud of our achievements as we continue to test more per head than any other European country. However, we do know that more needs to be done.’

Baroness Dido Harding, interim head of the National Institute for Health Protection, said reducing turnaround times was an ‘absolute priority’. She added improvements were expected as capacity ‘continues to grow at pace’.

She also said partnerships and rapid advances in technology will help the system meet its target of 500,000 tests a day by the end of October. She added: ‘Nearly 30,000 testing capacity has been added in the last week.’

US election 2020: Kristen Welker was ‘clear winner’ on social media