The Prime Minister and the Labour leader are both set to pay their respects to the father-of-five after he was stabbed to death while holding a constituency surgery at Belfairs Methodist Church in Leigh-on-Sea on October 15.

A message from the Pope will also be read during the requiem mass is held in London. The Archbishop of Westminster, Cardinal Vincent Nichols, will preside and Archbishop Claudio Gugerotti, the Apostolic Nuncio to Great Britain, will deliver the message from Pope Francis.

Yesterday, people lined the streets to pay their respects to the Southend West MP as mourners attended a private ecumenical service at St Mary’s Church in Prittlewell on Monday.

Former Conservative MP Ann Widdecombe, a friend of Sir David’s, read a statement on behalf of the Amess family, similar to the one released shortly after his death, asking people to ‘set aside hatred’ and urging tolerance.

Southend West MP Sir David was killed during a constituency surgery in Leigh-on-Sea in Essex on October 15.

Ali Harbi Ali, 25, has been charged with his murder and also with preparing acts of terrorism between May 1 2019 and September 28 this year. He is due to enter pleas in December. 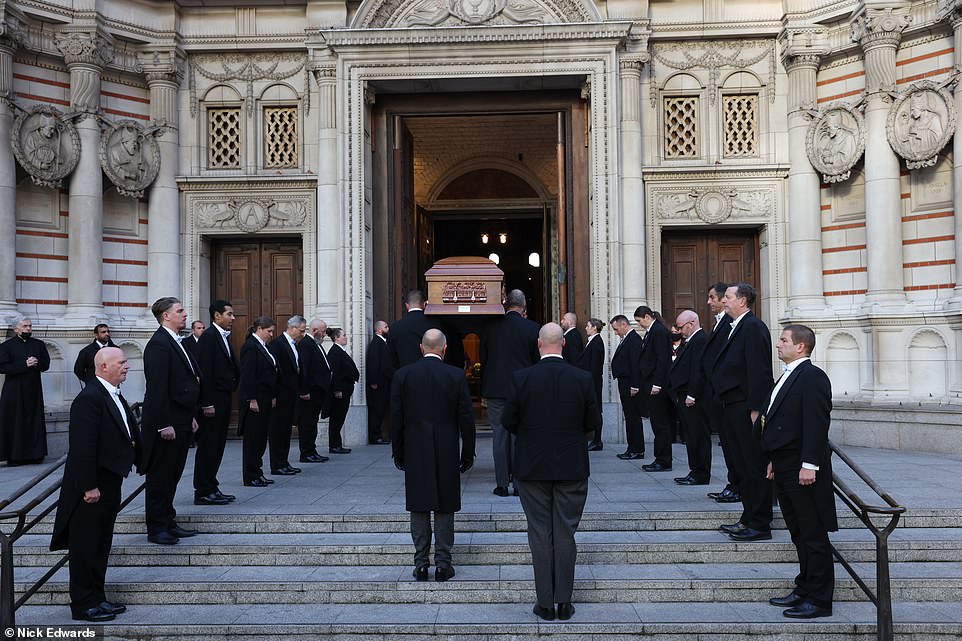 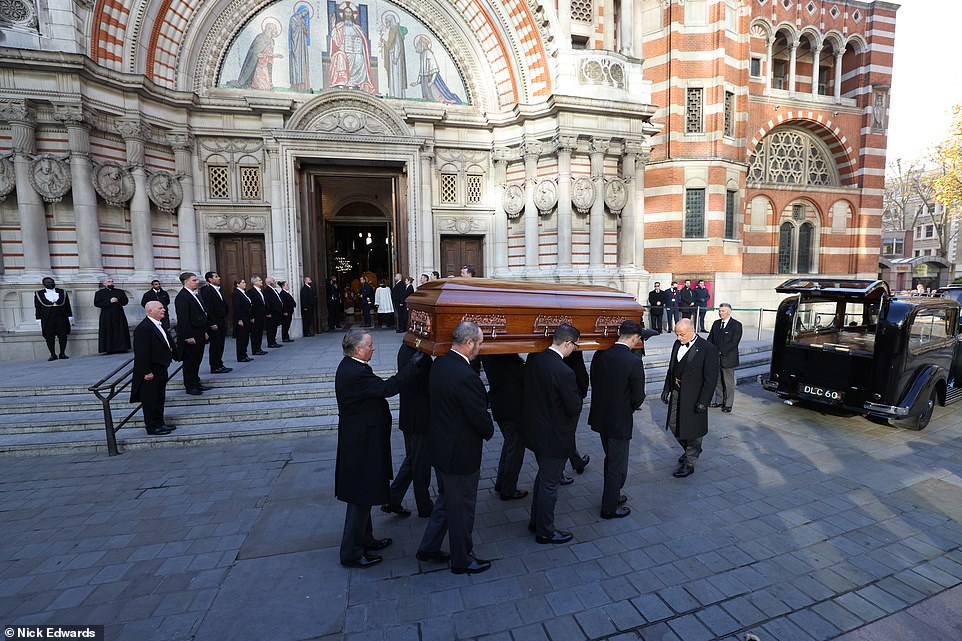 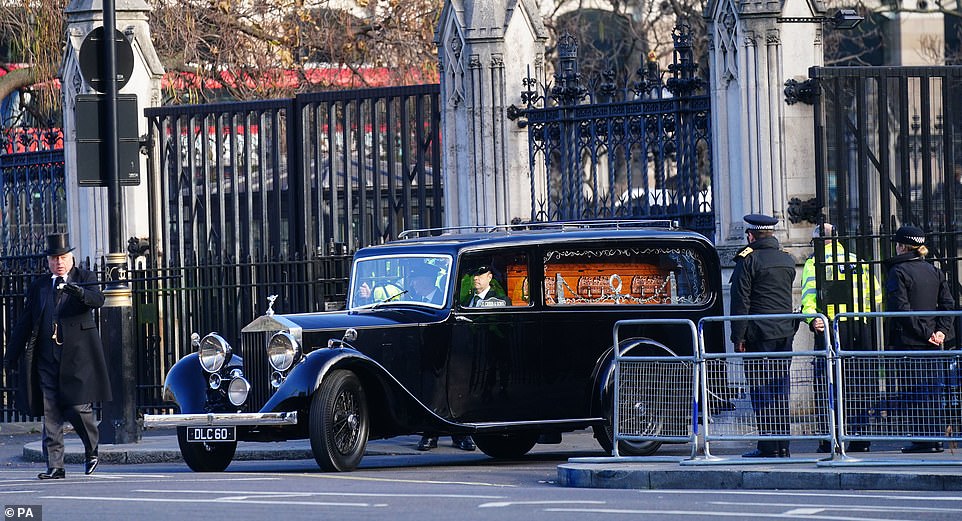 The hearse carrying the coffin of Sir David Amess MP leaves the Palace of Westminster where it laid in the chapel overnight, ahead of a requiem mass at Westminster Cathedral 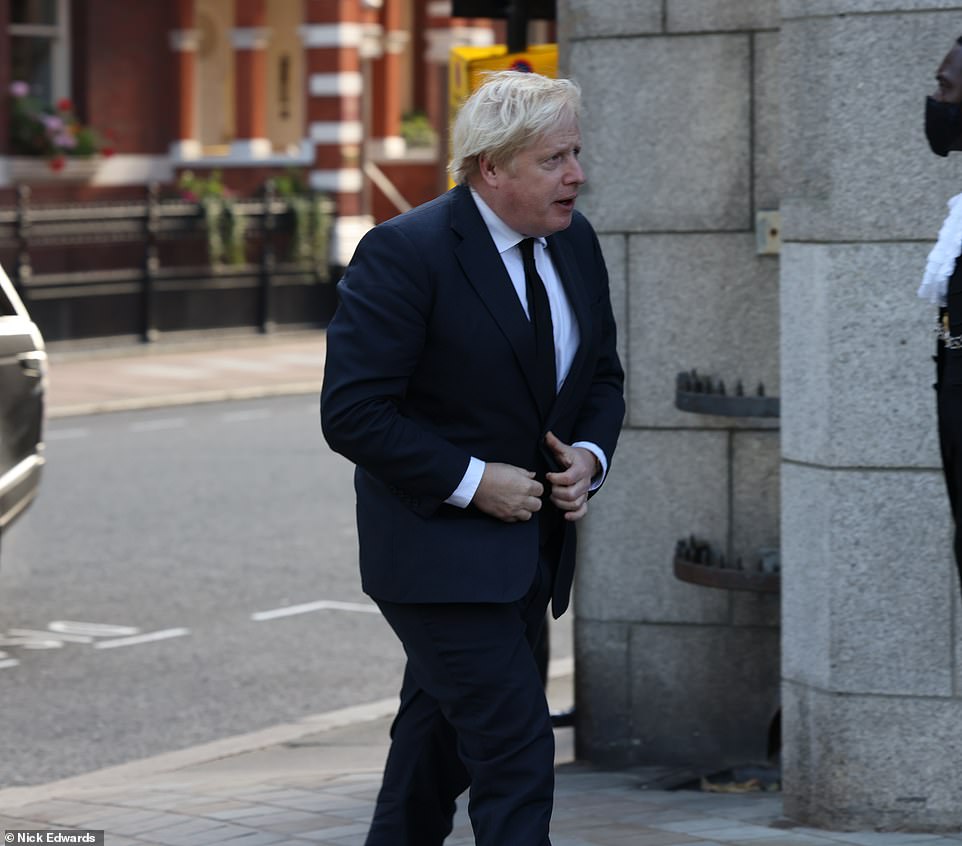 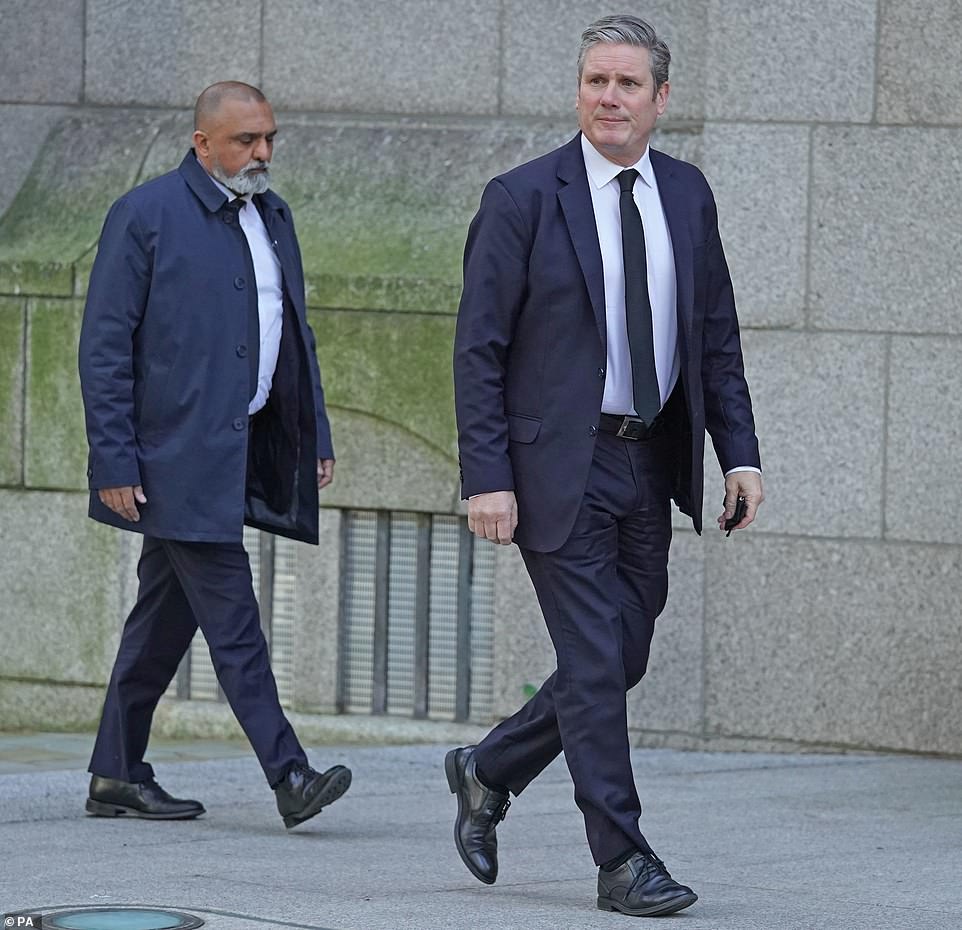 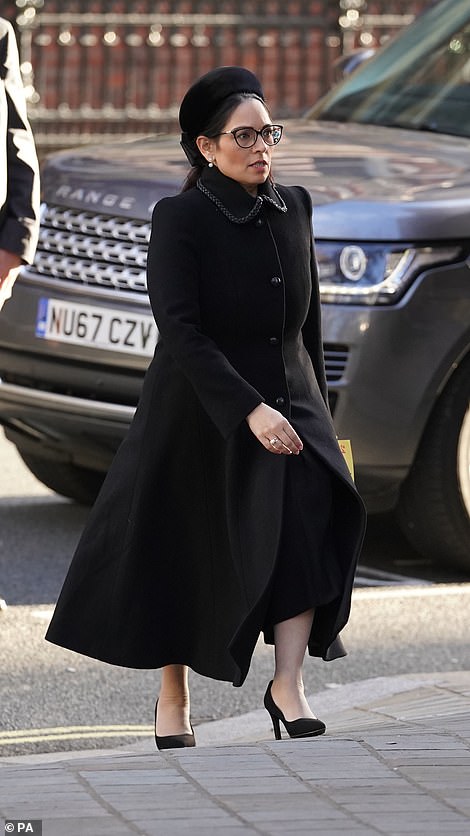 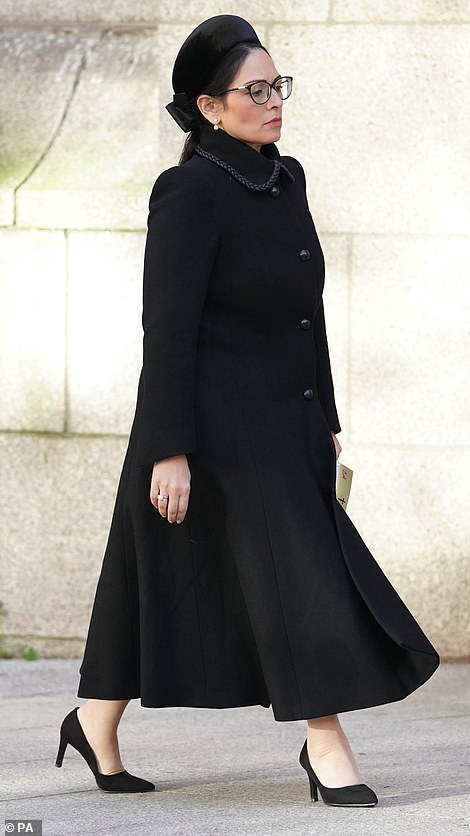 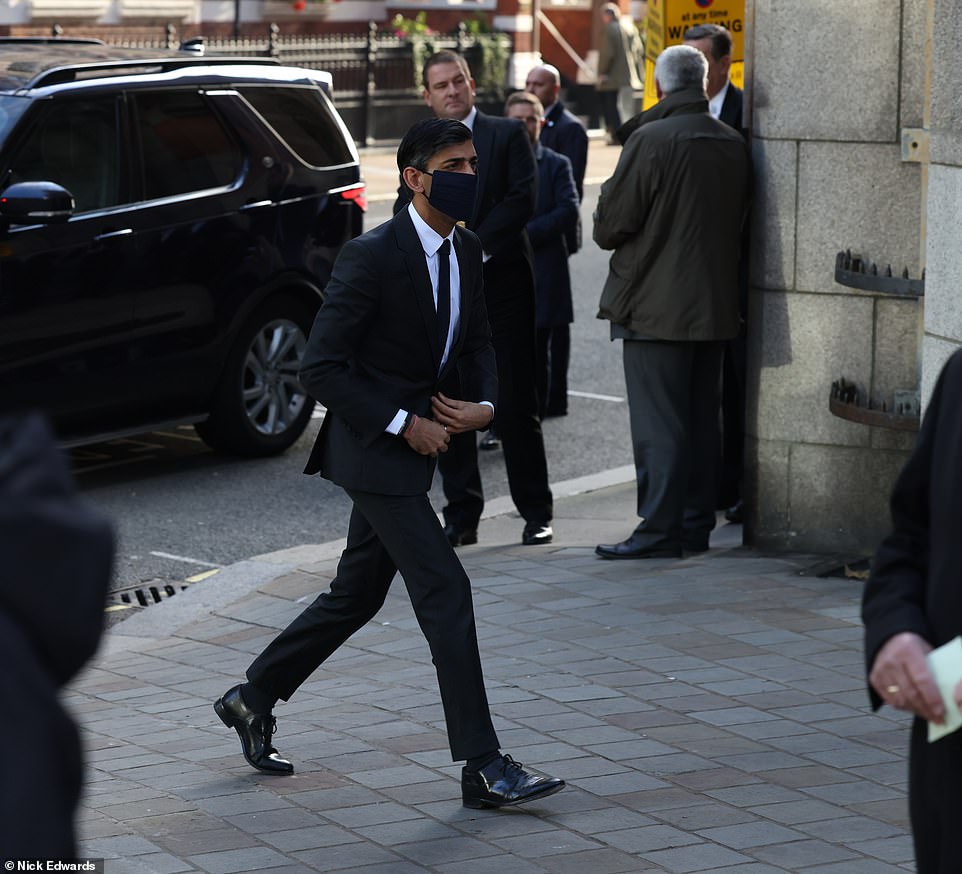 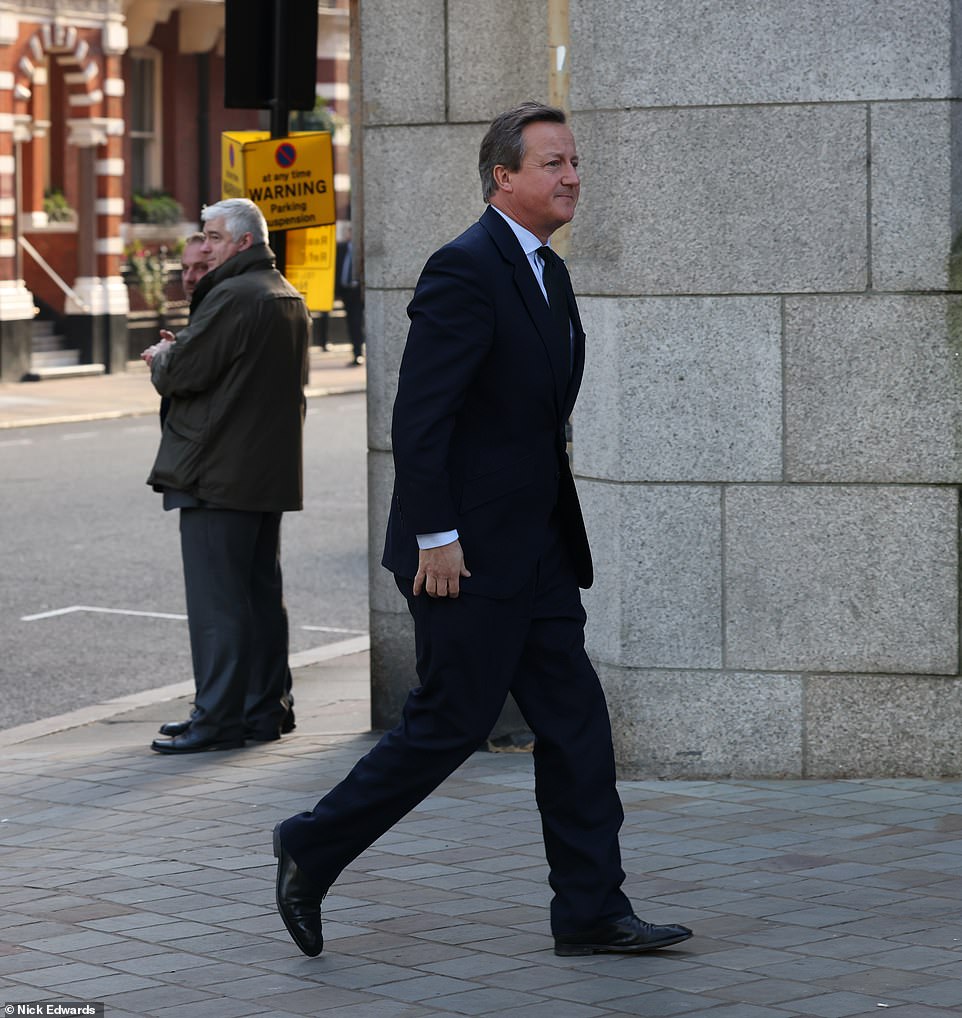 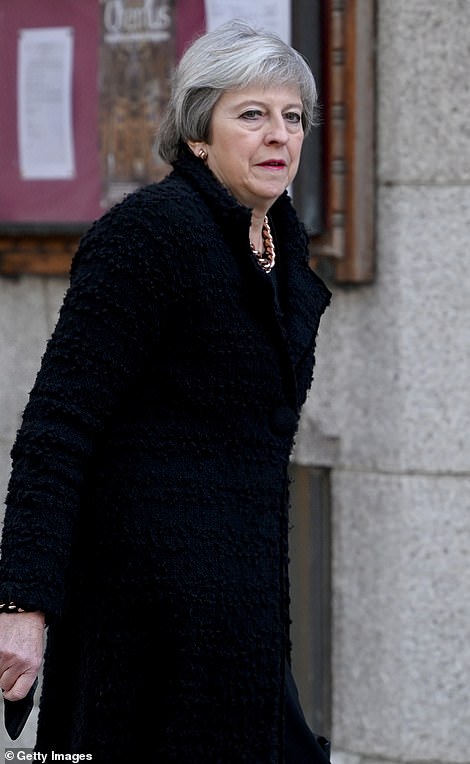 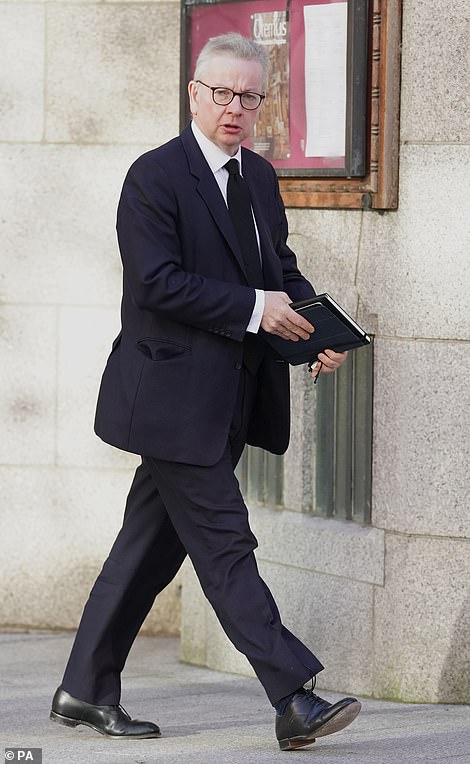 Sir David’s coffin, draped in a union flag, was carried by pallbearers from Southend Fire Service.

After the church service, they carried the coffin to a horse-drawn hearse for a procession around Southend.

Hundreds of people gathered outside Southend’s Civic Centre to pay their respects as the hearse, led by four black horses, paused in front of it.

Uniformed police officers bowed their heads as the hearse arrived and people applauded.

Following his death, MPs paid tribute to Sir David in the Commons and a service was held in Sir David’s honour at St Margaret’s Church.

Prime Minister Boris Johnson and Labour leader Sir Keir Starmer were among around 800 politicians in attendance to hear the Archbishop of Canterbury say the ‘light lit by public service’ provided by MPs like Sir David ‘must never be put out’.

Yesterday, Sir David Amess’s ‘absolutely broken’ family pleaded with Britons to ‘set aside their differences’ in an emotional statement read out at his funeral – as Boris Johnson said ministers ‘broke down’ when they heard of his death.

The Tory MP’s wife, Julia, son, David, and daughters, Flo, Katie, Sarah and Alexandra, were all believed to be at the service. 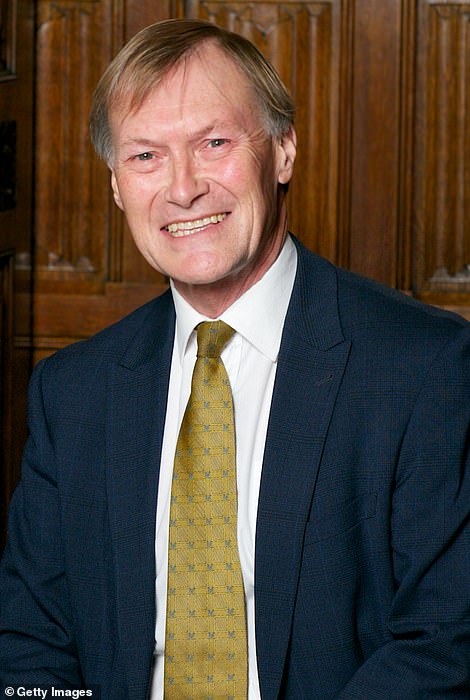 ‘This is the only way forward – set aside hatred and work towards togetherness,’ the family said in a statement read out by Sir David’s friend and former colleague, Ann Widdecombe. ‘Whatever one’s race, religious or political beliefs, be tolerant and try to understand. As a family, we are trying to understand why this awful thing has occurred.

‘Nobody should die in that way. Nobody. Please let some good come from this tragedy. We are absolutely broken, but we will survive and carry on for the sake of a wonderful and inspiring man. We ask at this time that the family’s privacy be respected so that we can grieve in private.’

Earlier, delivering the eulogy, Sir David’s friend Mark Francois MP remembered him as ‘the original Essex cheeky chappy’ and praised his service to Southend, which will now become a city in his posthumous honour.

After a service where a local choir sung Vera Lynn’s ‘We’ll Meet Again’, pall bearers from Leigh-On-Sea Fire Station carried the MP’s coffin out of the churchyard of St Mary’s in Prittlewell before it was placed into a horse-drawn hearse, as members of the public broke into spontaneous applause.

Earlier, Boris Johnson recalled how he was in the middle of a cabinet away day in Bristol when he learned of  the veteran MP’s death, and that when he told colleagues several ‘broke down’.

He told BBC Radio Essex: ‘It was clear he inspired feelings of affection, love and admiration for the causes he espoused. He was a guy who campaigned about things he really cared for… He showed what you can achieve as an MP to change lives of people up and down the country and he will be much, much missed.’

Mark Francois praised Sir David’s service to his constituents during his eulogy at his funeral in Southend. 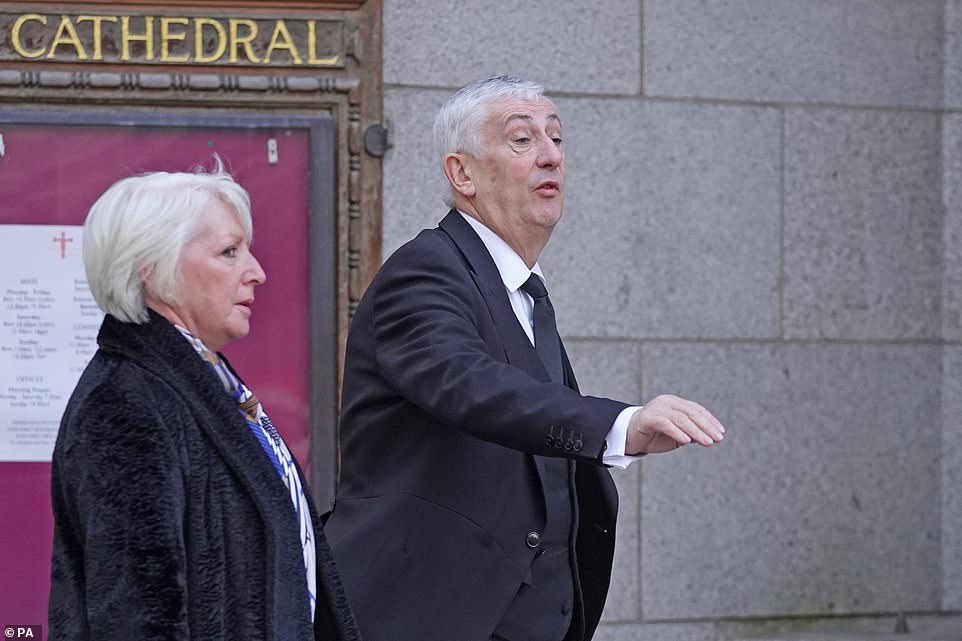 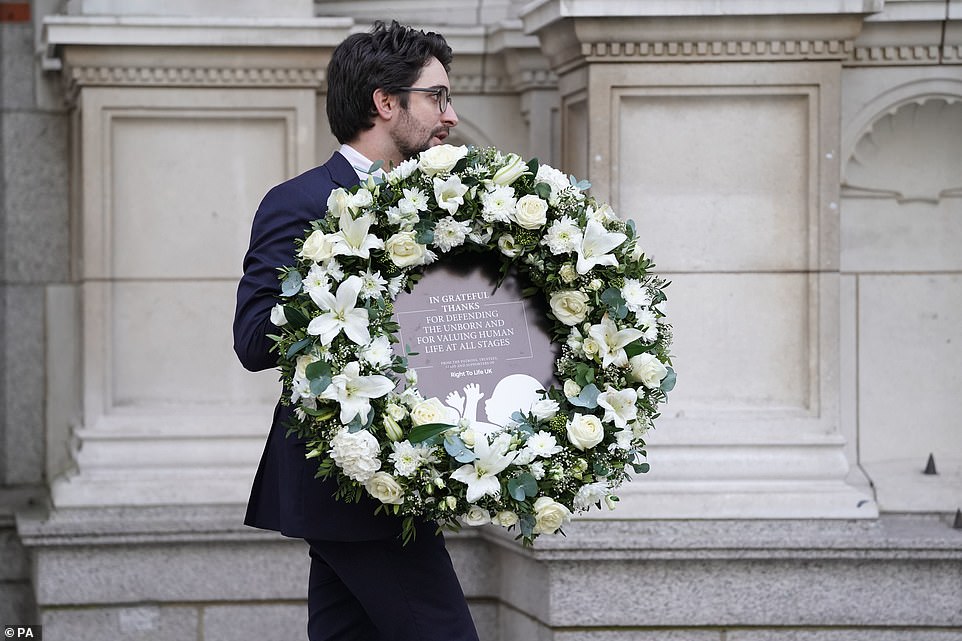 A wreath is carried into Westminster Cathedral, central London, ahead of a requiem mass for Sir David Amess MP 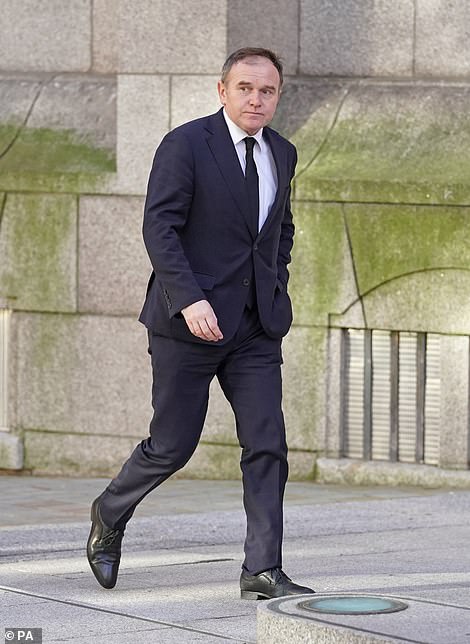 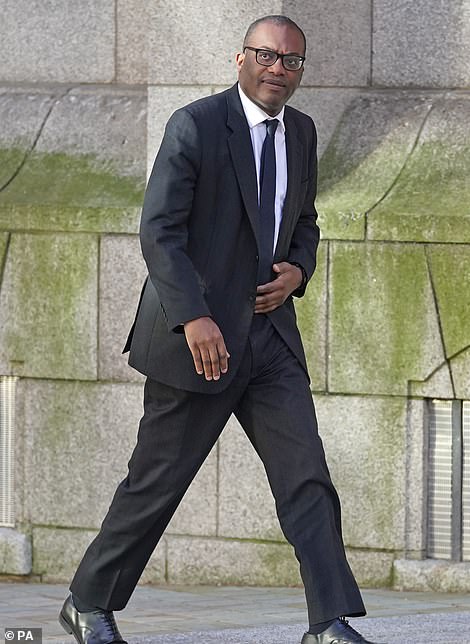 The Rayleigh and Wickford MP told mourners at St Mary’s Church in Prittlewell: ‘Our electors employ us to represent them in a contract renewable every few years.

‘We work for them and not the other way around, and no-one was ever more conscious of that than David Amess.

‘Whatever one thinks of members of Parliament, and opinions do vary, in my experience MPs of all parties do genuinely try and help other people.’

The Tory MP continued: ‘He was the original Essex cheeky chappy. In short, David Amess had more front than Brighton.

‘He was deeply honoured to be knighted by Her Majesty the Queen at Windsor. As he told the Echo newspaper: ‘I never dreamt that one day a boy from Forest Gate would be made a knight by a Queen in a castle’.

‘He subsequently celebrated by hiring a lightweight suit of armour and turning up to the mayor of Southend’s annual reception on a horse. When he was asked what he thought he was doing, he simply replied: ‘I’m a knight’.’

Mr Francois continued: ‘He put Basildon firmly on the map and he worked tirelessly for Southend.

‘In the end, I think his constituents loved him for it.

‘Just look at the turnout here today in this beautiful house of God, which, before long, will form part of the city of Southend – forever.

‘So, he won in the end. Some would say, including me, that David was a bit of a legend really.’

The former minister also recalled how Sir David had helped break the world record for the most centenarians at one lunch during an event in Southend, recorded an album with Bananarama and had a boiled sweet blessed by the Pope.

Finishing the tribute, Mr Francois said: ‘The David Amess I knew never yielded on an important point of principle to anyone, and so neither shall we.

‘Despite this awful tragedy, we are going to keep calm and carry on, because I earnestly believe that is exactly what he would have wanted us to do.

‘So, we come to say farewell, or perhaps it is adieu, to Sir David Amess – a wonderful husband and father to Lady Julia and their children, a fine parliamentarian and an absolutely brilliant constituency MP.

‘Whatever the weaknesses of Parliament, David Amess was the living embodiment of all its strengths.

‘You see, ladies and gentlemen, in the end he really was, quite literally, a jolly good fellow. And so, I am sure, say all of us.’

One of Einstein’s manuscripts was put up for auction in Paris.. know the expected price

Crypto.com coin surging after deal to rename Staples Center: here is where to buy CRO coin

Crypto.com coin surging after deal to rename Staples Center: here is where to buy CRO coin