Boris Johnson tonight leveled blame for the swift Taliban victory in Afghanistan at the feet of Joe Biden and US forces.

The Prime Minister tonight said that the decision by the US to remove its air cover for the Afghan army meant ‘things did go faster’ and allowed the Islamic extremists to catch the West on the hop.

He spoke as he visited soldiers from 16 Air Assault Brigade, which took part in the UK airlift from Kabul, at its base in Colchester, Essex.

It came amid a furious cabinet row between Defence Secretary Ben Wallace and Foreign Secretary Dominic Raab about how much ministers were told about the possible collapse before it happened.

Mr Johnson said: ‘It’s been clear for many months that the situation could go very fast and that has been in part of the intelligence briefings.

‘There have also been suggestions, as you know, that the Afghan national defence force might hold on for longer.

‘But logically you can see what happens: Once people in the Afghan Army felt they were no longer going to be getting the American air cover then the logic for them became really to end their resistance and so things did go faster.’

Mr Johnson’s critique of the US came after Mr Wallace had earlier suggested that the abrupt abandonment of Afghanistan and thousands of allies left on the ground, meant America  was no longer a superpower. 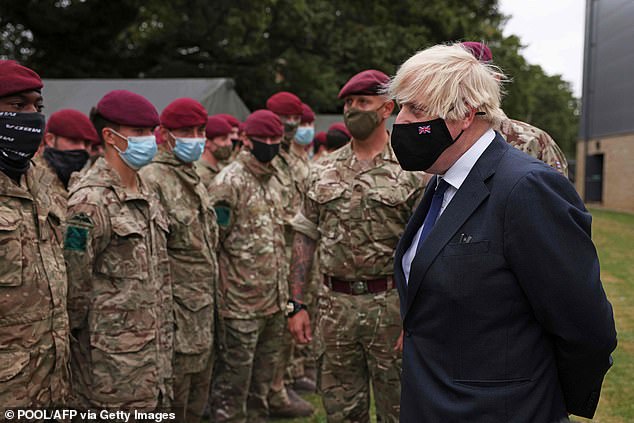 The Prime Minister tonight said that the decision by the US to remove its air cover for the Afghan army meant ‘things did go faster’ and allowed the Islanic extremists to catch the West on the hop. 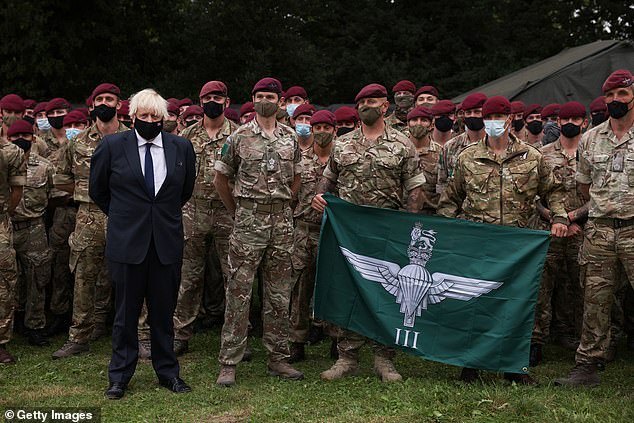 He spoke as he visited soldiers from 16 Air Assault Brigade, which took part in the UK airlift from Kabul, at its base in Colchester, Essex. 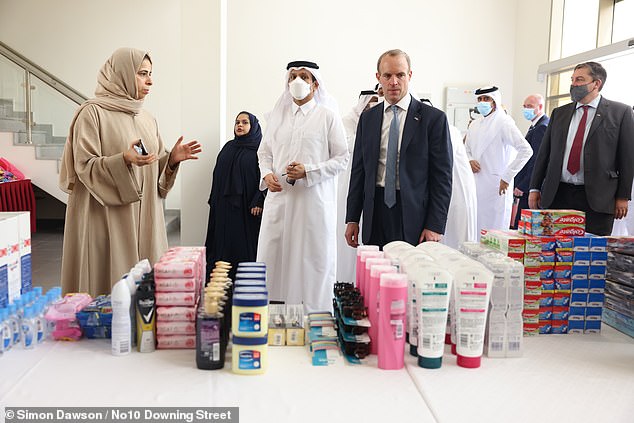 Dominic Raab arrived in Doha, Qatar, in the early hours of this morning as he stepped up efforts to help British allies left behind in Afghanistan 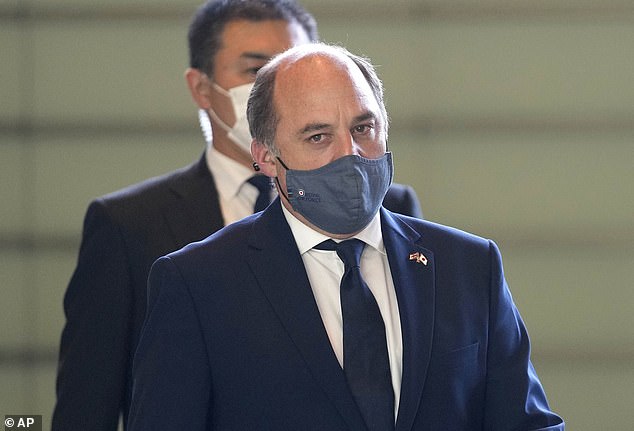 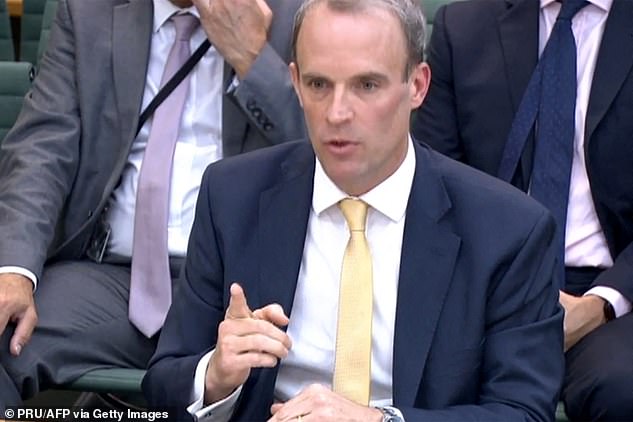 The West’s abrupt withdrawal from Afghanistan is ‘an act of strategic self-harm’ that will increase terrorism and embolden China and Russia, Boris Johnson’s former national security adviser warned today.

Lord Sedwill, a former UK ambassador to Kabul, lashed out at the US-led retreat that left the Taliban in charge and stranded thousands of people desperate to escape.

He warned that that humiliating defeat which ended 20 years of conflict would ‘undoubtedly’ boost extremism and terrorism.

Speaking at an event hosted by the Policy Exchange think thank this afternoon: ‘This is in my view a bad policy, badly implemented. It is an act of strategic self-harm.

‘It was not inevitable that either this decision had to be taken or indeed it had to be implemented in the way it was.’

Former Nato chief Lord Robertson told the same event that the organisation had been weakened after the US’s ‘hasty, crassly-handled surrender’, saying Joe Biden’s nation had been ‘humiliated.

In remarks that show how frayed the so-called ‘special relationship’ with Washington has become in recent weeks, he told the Spectator magazine: ‘It is obvious that Britain is not a superpower.

‘But a superpower that is also not prepared to stick at something isn’t probably a superpower either. It is certainly not a global force, it’s just a big power.’

Earlier Mr Raab today hit back at Ben Wallace as he dismissed the Defence Secretary’s claim that he had warned in July the ‘game is up’ in Afghanistan, weeks before the Foreign Secretary took a Mediterranean holiday as the Afghan crisis unfolded.

Mr Raab said that ‘Ben and I were taking the same assessment throughout until very late’ and ‘we were all working to the same set of assumptions’.

He yesterday pointed the finger at intelligence failings after he said the UK’s central assessment was it was ‘unlikely’ Kabul would fall to the Taliban this year.

He said the main planning scenario of a slow deterioration in the country had remained in place ‘until late’.

But Mr Wallace rejected the suggestion that intelligence had failed and said he had argued in July that ‘whatever we think, the game is up’ and the UK should ‘accelerate whatever we’re doing’.

His comments came after Mr Raab was confronted with his own department’s ‘principal risk report’, dated July 22, three weeks before Kabul fell, which had warned ‘rapid Taliban advances… could lead to fall of cities’ and the group’s swift return to power.

Tom Tugendhat, the Tory chairman of the Foreign Affairs Select Committee, ambushed Mr Raab with the document, piling pressure on the Cabinet minister because it suggested he had been warned about the deteriorating situation in Afghanistan two weeks before he went on a family holiday to Crete.

But the Foreign Office later claimed the document simply set out ‘potential risks’ and it was ‘simply wrong and misleading’ to suggest it was at odds with the Government’s central assessment.

The Prime Minister has said there are two tasks for the UK following the withdrawal from Afghanistan.

Britain’s former representative in Kabul today warned the UK is ‘playing catch up’ on diplomatic efforts in the region around Afghanistan.

But he suggested Britain had been slow off the mark in speaking to third countries as ministers and officials now scramble to help people escape Afghanistan following the withdrawal of US and UK forces.

Sir Nick told the BBC Radio 4 Today programme: ‘I think the important thing is now that the wheels are clearly turning and turning rapidly and it is good that the Foreign Secretary is out and engaging face to face with these countries in the region.

‘There isn’t, obviously, any time to lose at all and to some extent we are, yes, playing catch up.’

‘Secondly, we have got to make sure that we level with the Taliban who are the new authorities in Kabul.

‘They have got to understand that if they want engagement with the west, with us, our friends, and I know that they do, then the first priority for us is safe passage for those who want to leave.’

It came as Mr Raab arrived in Qatar in the early hours of this morning for talks with the country’s emir and foreign minister about what can be done to secure safe passage out of Afghanistan for British allies who were left behind in the country following the US and UK withdrawal.

Mr Wallace told The Spectator magazine that it was clear by July that the Afghan forces trained by the West would melt away once US troops withdrew.

He said: ‘It was a bit of a shock when Herat fell. Some of these big places had historically been resistant to the Taliban.

‘When they fell, literally without a fight… I remember back in July arguing that whatever we think, the game is up and we have to do what we can to accelerate whatever we’re doing.’

In comments which appeared to be directed at Mr Raab, he said: ‘I’ve already seen some lines about the failure of intelligence. 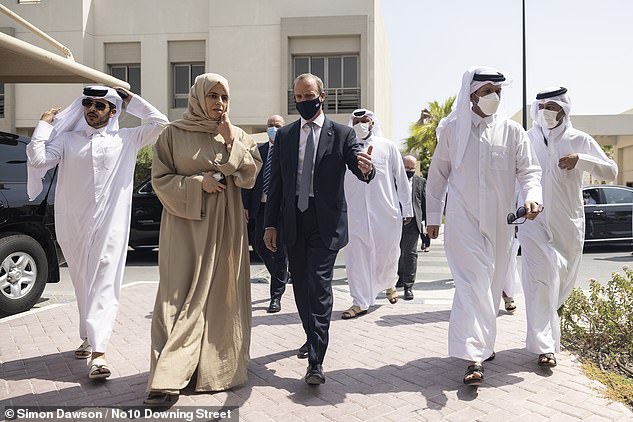 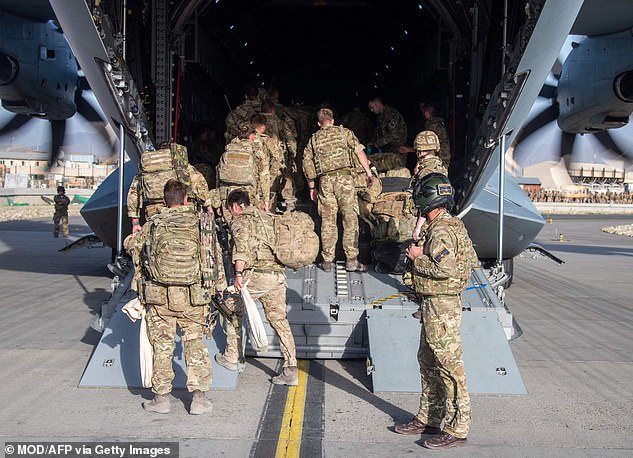 ‘When the Soviet Union crumbled, when Libya collapsed, when the actual moment came in Afghanistan, intelligence hadn’t failed. It was just limited, as it always is at the very end.’

Mr Raab responded to the remarks today, telling broadcasters: ‘Ben and I were taking the same assessment throughout until very late.

‘The central assessment had been that Kabul wouldn’t fall until after the end of August and the evacuation of allied troops, and indeed there would be a steady deterioration throughout the remaining part of the year, so we were all working to the same set of assumptions.’

Mr Wallace’s remarks were in contrast to the picture painted by Mr Raab when he gave evidence to MPs yesterday.

Mr Tugendhat confronted Mr Raab with the Foreign Office report and said: ‘(It) read on Afghanistan ‘peace talks have stalled and US/NATO withdrawal is resulting in rapid Taliban advances, this could lead to fall of cities, collapse of security forces, Taliban return to power, mass displacement and significant humanitarian need, the embassy may need to close if security deteriorates’.

‘This was on the 22nd of July. How did your actions change after that report?’

Mr Raab said he was ‘very mindful of that’ and added: ‘The central assessment remained until late that the deterioration would be incremental and the planning for military withdrawal obviously began in April.

‘But the contingency planning was also there for a more rapid deterioration.’

The Foreign Secretary said the UK’s central assessment was that Kabul was ‘unlikely’ to fall to the Taliban in 2021.

He told MPs: ‘The central assessment that we were operating to, and it was certainly backed up by the JIC (Joint Intelligence Committee) and the military, is that the most likely, the central proposition, was that given the troop withdrawal by the end of August, you’d see a steady deterioration from that point and it was unlikely Kabul would fall this year.’

The Principal Risk Register is classed as an ‘official-sensitive’ document and is not publicly available.

The Foreign Office said the document ‘does not contain intelligence assessments’.

A spokeswoman said: ‘It is an internal document which sets out potential risks to the organisation for planning purposes including around duty of care to staff.

‘It is simply wrong and misleading to suggest this document is in any way at odds with our detailed assessments of the situation in Afghanistan or our public position throughout the crisis.’

Labour has called for an end to the ‘unseemly infighting at the top of Government’.

The row over why the UK was caught out by the speed of the Taliban takeover came as Mr Wallace said he does not believe Britain is a ‘superpower’.

He also risked a diplomatic spat with Washington after he also appeared to question the status of the US.

He told The Spectator: ‘It is obvious that Britain is not a superpower. But a superpower that is also not prepared to stick at something isn’t probably a superpower either. It is certainly not a global force, it’s just a big power.’

His comments will be seen as a swipe at the US after its decision to abandon its military effort in Afghanistan.

But defence sources denied this, saying he was making a wider point about the need for the West to stand up to adversaries prepared to stick to ‘100-year plans’.

A source said Mr Wallace was clear that the US ‘is a superpower’.

Chewy shares plummet on disappointing Q2 results: should you buy or sell?

World Cup qualifiers.. Germany is satisfied with a double against Liechtenstein