Boris Johnson today cancelled his trip to India amid surging coronavirus cases and alarm about a new variant.

A joint statement from the British and Indian government said the trip – already scaled back – will not go ahead ‘in light of the current situation’.

‘In the light of the current coronavirus situation, Prime Minister Boris Johnson will not be able to travel to India next week,’ the statement said.

‘Instead, Prime Ministers Modi and Johnson will speak later this month to agree and launch their ambitious plans for the future partnership between the UK and India.

‘They will remain in regular contact beyond this, and look forward to meeting in person later this year.’ 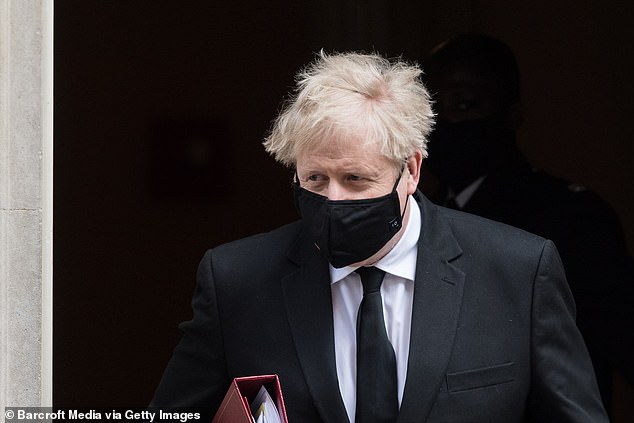 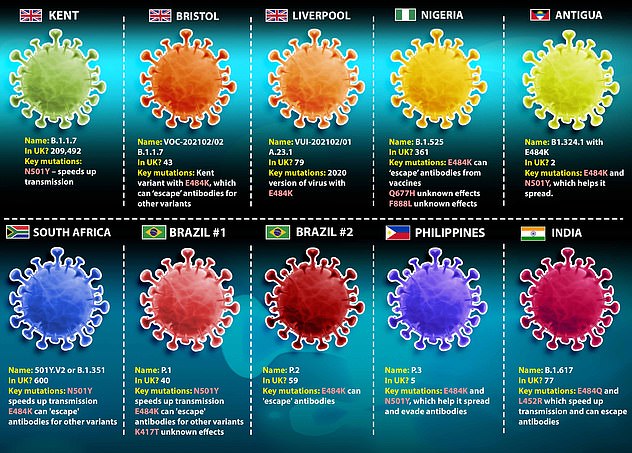 The Covid variants circulating in the UK: Public Health England says officially the Indian variant has been spotted 77 times in Scotland and England since March 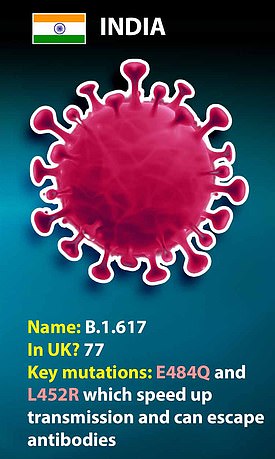 The news comes after an expert warned the Indian coronavirus variant could ‘pose a threat’ to mr Johnson’s roadmap out of lockdown.

It is feared the B.1.617 strain spreads more easily than older versions of the virus and scientists say it has mutations which may help it evade vaccines.

Professor Danny Altmann, an Imperial College London immunologist, said there were vaccinated vulnerable Britons who could ‘still be caught out by variants like this’.

Health officials warned yesterday that cases of people in the UK contracting the South African and Kent strains after being vaccinated have already been recorded.

Public Health England says officially the Indian variant has been spotted 77 times in Scotland and England since March.

But analysis of publicly available information on new variant numbers on Saturday suggest cases have risen to 160, suggesting it’s spreading rapidly in the community.

PHE currently lists it as a ‘variant under investigation’, a tier below other troublesome strains including the Kent, South African and Brazilian variants.

But Professor Altmann told Good Morning Britain today: ‘My assumption from everything I’ve seen is that it will become a variant of concern.’

He added: ‘I think our road map is going well and at the moment, in this country, we are doing rather well, enjoying unlocking – but out there there is the Indian variant, the South African, Brazilian etc, and they do pose a threat.’

SAGE member Professor Andrew Hayward backed calls for India to be put on the ‘red list’ to buy experts time to study the variant in more detail.

The infectious disease expert urged the Government to ‘err on the side of caution and act sooner rather than later’.

But top experts studying Britain’s Covid variants said the Indian variant was unlikely to ever take off in the UK because its mutations were ‘not top tier’.

They questioned whether the strain actually is more transmissible than older versions, claiming the evidence was still murky. 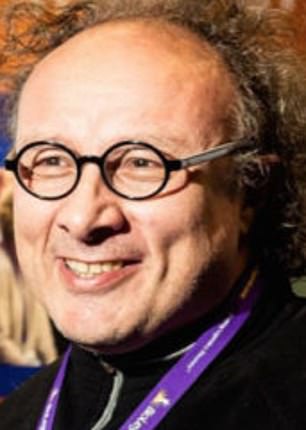 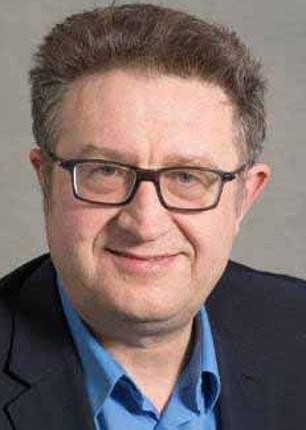 Professor Danny Altmann (left), an Imperial College London immunologist, said there were vaccinated vulnerable Britons who could ‘still be caught out by variants like this’. SAGE member Professor Andrew Hayward (right) backed calls for India to be put on the ‘red list’ to buy experts time to study the variant in more detail

3 Details Centre REITs With The Best Upside According To Analysts

Details facilities — a modest sub-sector amongst actual estate financial commitment trusts (REITs) — are less very well-recognized than other types of REITs. Knowledge centers have and regulate...