When Boris Johnson threatened to abandon talks with Andy Burnham on a Covid rescue package, Manchester’s mayor figured he was bluffing.

Having come to power on a pledge to ‘level up’ the North, the Prime Minister wouldn’t dare face him down over a £5million gap in their positions, would he?

Johnson, who craves being loved more than any other PM, would be terrified that the ‘Red Wall’ ex-Labour voters would give up on him.

He wouldn’t just walk away for the sake of a drop in the ocean compared with the tsunami of cash thrown at fighting Covid nationally. 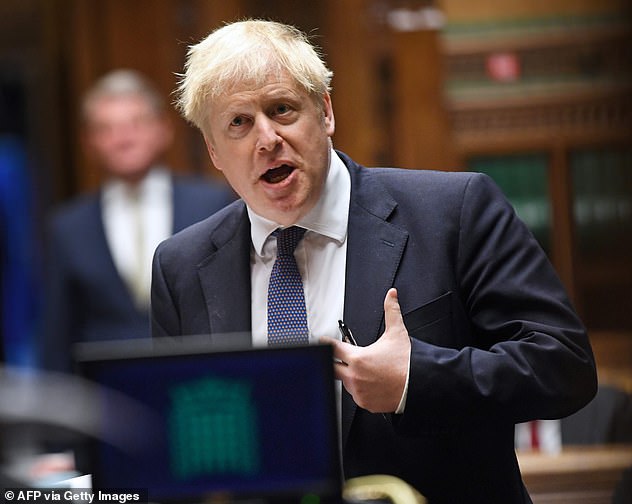 When Boris Johnson (pictured) threatened to abandon talks with Andy Burnham on a Covid rescue package, Manchester’s mayor figured he was bluffing

And then, over the head of ‘Manc of the People’ Burnham, impose a Tier 3 lockdown on the city like some latter day Napoleon.

He’s Boris, not Boney. Well, he just did walk away. Johnson, the man of bluff and bluster, called Burnham’s bluff.

The mayor tried to hide his defeat by claiming the moral high ground, accusing Johnson of treating Manchester’s fate like a game of poker.

In truth, it was Burnham who attempted to get more money than had been given to Liverpool.

Had he won, it would have been a handy card to play when up for re-election in six months’ time.

Ever since the Manchester lockdown loomed, Burnham has been grandstanding in his windcheater and black shirt, like a cross between a pensioned-off boy band member and the anti-Soviet Polish shipyard leader Lech Walesa.

He may have the floppy fringe and doe eyes of a crooner, but a Mancunian Walesa he is not.

After state school and Cambridge University, he rose from political adviser to minister.

Recently he has evoked the spirit of the 1980s miners strike, claiming Johnson was treating its citizens like ‘canaries in the coalmine’.

On Tuesday, he accused the PM of trying to ‘grind them into the dirt’.

It would be more convincing if Burnham’s own brief spell in the Cabinet had not been marred by two huge controversies.

He was Chief Secretary to the Treasury when the financial crash started in 2007.

By Labour’s 2010 election defeat, mainly because of the perception that the nation had been left bankrupt, Burnham’s successor as Treasury Chief Secretary, Liam Byrne, spelled out the truth to the incoming government: ‘There is no money left.’ Some was spent by Burnham. 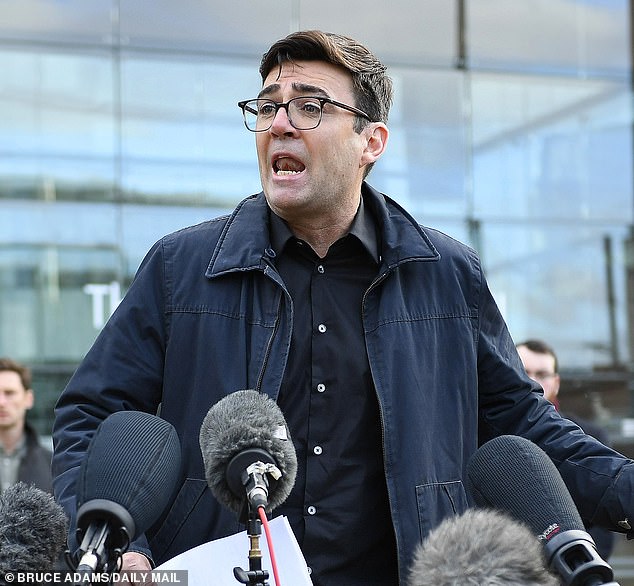 And then, over the head of ‘Manc of the People’ Burnham (pictured), impose a Tier 3 lockdown on the city like some latter day Napoleon

And then his period as Health Secretary in 2010 was clouded by allegations of appalling health-service negligence following the revelation that up to 1,200 patients in Stafford Hospital had died unnecessarily; there were also claims of ‘excess’ death rates at 14 NHS trusts in England.

Burnham denied any wrongdoing. But you might think that anyone accused of failing to do enough to prevent unnecessary deaths would think twice before considering anything that might lead to ‘excess deaths’ as a result of Covid in Manchester.

Which is what Johnson warned would happen as a result of Burnham’s intransigence.

Some point out that Burnham was thrashed by Jeremy Corbyn in the 2015 leadership contest, and that only now is he able to relish the limelight he always craved as Labour’s new glamour boy.

They say Johnson will now be reviled in parts of the North just as Margaret Thatcher is.

But it should be seen in context. One Tory ex-Cabinet minister with a northern seat told me: ‘If you are a Conservative MP in Manchester and a local trader complains ‘why are you making me go bust when if my shop was in Guildford or Windsor it could stay open?’, you have to take their side publicly.’

In my book, Johnson had no choice. He could not afford to be held to ransom by showboating Burnham or other mayors – they don’t have to pay to clear up the coronavirus chaos, Johnson does.

It is telling that less publicity hungry Labour mayors, like Sheffield’s Dan Jarvis and Liverpool’s Steve Rotheram, have secured generous Covid bailouts without any Burnham-style histrionics. The PM must take a national view and show true leadership.

It won’t always win him friends and may lose him votes in the North at the next election.

But if by avoiding a national lockdown and taking tough measures in cities like Manchester, the UK comes out of the pandemic in better shape, Johnson will have passed a much more important test: the test of a true leader.

There is also a wider dimension to his hardball tactics.

He is sending a message to Michel Barnier, the EU’s chief Brexit negotiator, who thinks Johnson’s threat to walk out on trade talks is just a bluff.

How could the UK scupper a trade deal with the EU all because of a tiny dispute, relatively speaking, over fishing rights?

He wouldn’t dare, he is all bluster, they say in Brussels.

But however ‘tiny’ that fishing rights dispute, it is no less important to Johnson than the £5million that made him turn his back on Burnham. And Barnier will have noted that, despite this, Johnson still got his way.