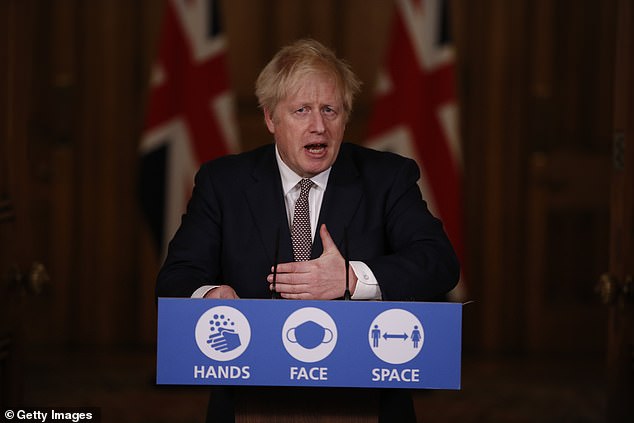 The Prime Minister was battling to quell a Tory revolt as he unveiled a series of concessions in a bid to persuade backbenchers to back a tougher tiers system.

But ahead of a critical Commons vote Tuesday, the rebels tonight demanded ‘hard evidence’ to convince them that the crackdown will save more lives than it costs.

Tomorrow Downing Street will publish an analysis of the health, economic and social impacts of coronavirus and the measures taken to suppress it. The move is an attempt to limit the scale of a rebellion which has been growing since last week.

Downing Street will publish an analysis of the health, economic and social impacts of coronavirus and the measures taken to suppress it

The economic case for the new tier system will be set out by ministers today – after experts predicted it could cost the country £900million a day.

Amid threats of rebellion from Tory MPs, Downing Street will publish impact assessments to reveal how they decided what restrictions each area of the country will face when the tier system comes into force on Wednesday. More than 34million people are facing tougher restrictions than before the national lockdown.

The Centre for Economics & Business Research estimates the restrictions will cost the economy in England £900million a day, with high street shops and the hospitality industry bearing the brunt of the losses, caused by controls on trading.

The document will include forecasts from the Bank of England and the Office for Budget Responsibility. Mr Johnson yesterday dangled the prospect that some areas facing the harshest curbs in Tier Three could see them eased as part of a review before Christmas.

He also announced the new rules would be scrapped altogether in February unless MPs vote in the New Year to keep them in place until Easter. But in a letter to MPs, the he conceded: ‘These will not be easy decisions. With Christmas round the corner, and the difficult months of January and February ahead, we will need to continue to exercise caution.’

Mr Johnson insisted ‘no prime minister wants to impose restrictions which cause such harm to society, the economy and people’s mental health’.

But he warned that the ‘tougher tiers’ are needed ‘if we are to keep the virus under control and avoid either overwhelming the NHS or another national lockdown which is far more damaging and restrictive than these tiers’.

The government is also planning extra cash or bars and restaurants hit by upper-tier closures.

A government source told The Daily Telegraph: ‘There are already grants of £2,000 and £3,000 for businesses in Tiers 2 and 3 but we recognise we need to do more.’

Tonight Mr Johnson also sent a separate letter to around 70 Tory MPs in the Covid Recovery Group, which has led opposition to the tiers system. He insisted he was listening to their concerns as he pleaded for unity.

The PM wrote: ‘I do believe the strategy is a balanced approach, which helps protect the NHS from being overwhelmed, keeps children attending school, and lets the economy open up in a safe way, and the best way forward.

‘There is every reason to believe that the worst is nearly behind us, so now more than ever is the time to demonstrate unity and resolve. The prospects offered by vaccines and testing mean we can begin the process of recovery in earnest.’

Mr Johnson also promised the CRG it would receive a briefing on the evidence on how Covid is being spread in hospitality venues.

MPs will vote tomorrow on the new system of tiers that will come into effect when the national lockdown is lifted on Wednesday.

Only the Isle of Wight, Cornwall, and the Isles of Scilly will be under the lightest Tier One controls. Large swathes of the Midlands, North East and North West are in the most restrictive Tier Three.

In total, 99 per cent of England will enter Tier Two or Three, with tight restrictions on bars and restaurants plus a ban on households mixing indoors. Tory former minister Mark Harper, leader of the CRG, said he still needed to be convinced about the measures.

He said: ‘MPs can’t be expected to support these severe restrictions without a cost-benefit analysis and data showing they’ll do more good than harm.’

‘That’s why MPs need the harm/benefit analysis and the predicted impact of these restrictions on NHS capacity for their local areas.’ Greg Clark, chairman of the Commons business committee, said he was not persuaded by the promise of a ‘sunset clause’ that will give MPs a vote in February on keeping the tiers system.

Mr Clark is Conservative MP for Tunbridge Wells, which will be in Tier Three with the rest of Kent but has a lower rate of infections.

He told LBC’s Swarbrick on Sunday programme: ‘February is a long time away for my constituents who feel this is not just an injustice but is hitting the livelihoods of people in pubs and restaurants.’

Foreign Secretary Dominic Raab yesterday warned that England could face a third wave of Covid infections if ministers fail to ‘get the balance right’ with the curbs.

He insisted places will still be put into the tiers on a county-wide basis, not at a more local level.

Mr Raab also suggested some areas could move before Christmas but it was ‘more likely’ to be from Tier Three to Two.

Show us the evidence NHS can’t cope, Gove is told

Ministers are facing a furious backlash from MPs over claims the NHS will be unable to cope unless a near-lockdown continues for months.

But Tory rebels called for ‘hard evidence, not hyperbole’ and said Mr Gove must publish the evidence for his assertion. The Government faces a Commons showdown tomorrow, when MPs will vote on the new tier system which bans 99 per cent of the population from socialising indoors.

Mr Gove said over the weekend that without tough curbs the NHS would be ‘physically overwhelmed. Every bed, every ward occupied’. He added: ‘With every NHS bed full, the capacity of the health service to treat new emergency cases – people who had suffered serious accidents, heart attacks, strokes – would go.’

However, a growing number of Conservative MPs, led by former chief whip Mark Harper, are sceptical about the claim.

Mr Harper told the BBC: ‘Show us the evidence… the last time we were debating lockdown a slide was leaked from the Cabinet Office – the department which Michael Gove runs – which suggested that hospitals would be overwhelmed. We now know that the information on that slide was not correct. I’m saying to Michael that if he genuinely thinks that hospitals would be overwhelmed, then show us the modelling and the evidence that he’s seen.’

Coronavirus: How do you vaccinate 7.7 billion people?