The Prime Minister highlighted the right-wing populist’s attacks on ‘gender equality, LGBT rights and media freedom’ when they met in London this afternoon.

It came after Mr Johnson faced widespread criticism for meeting with Mr Orban, an ally of Russian autocrat Vladimir Putin.

He has previously talked about ‘Muslim invaders’ in his country and described migrants as ‘a poison’.

But Downing Street defended its decision to invite him, saying the meeting was ‘vital to the UK’s prosperity and security’, after Brexit.

There were demonstrations outside Downing Street ahead of this afternoon’s meeting.

‘The leaders also discussed a number of foreign policy issues including Russia, Belarus and China. The Prime Minister encouraged Hungary to use their influence to promote democracy and stability.’ 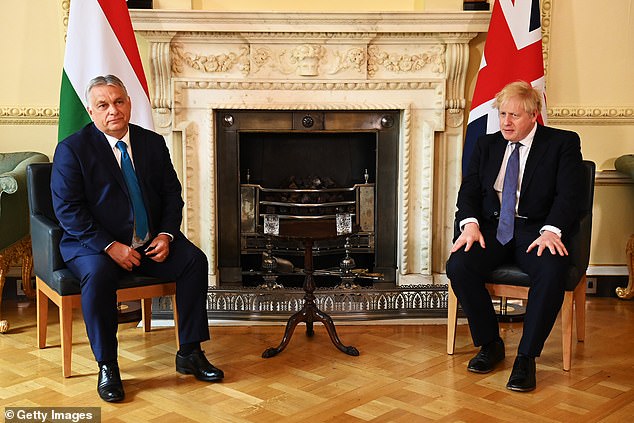 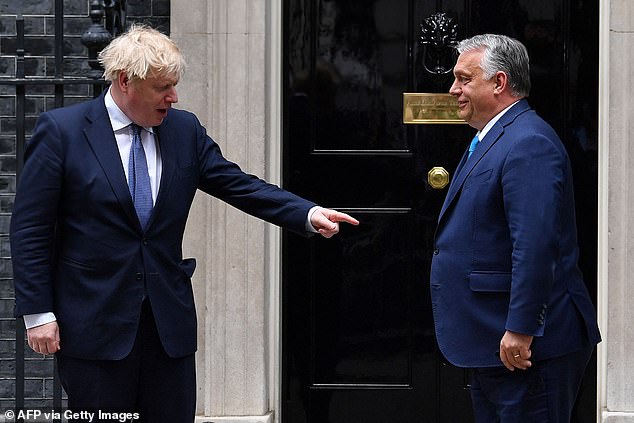 The Prime Minister’s is facing demands to raise Mr Orban’s assault on democracy in the Eastern European state, alleged Islamophobia and assault on freedom of the press. 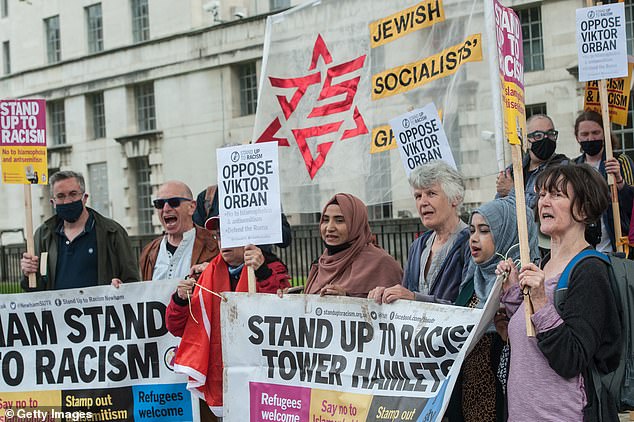 There were demonstrations outside Downing Street ahead of this afternoon’s meeting.

But Labour shadow foreign secretary Lisa Nandy called for the Prime Minister to ‘challenge the repeated attempts to undermine democratic values’ in Hungary by Mr Orban, who has been prime minister since 2010.

As well as stoking domestic tensions, the visit could also put under strain the UK’s relationship with the rest of the European Union.

Eurosceptic Mr Orban, who has previously praised Mr Johnson for delivering Brexit, is a close ally of Russian president Vladimir Putin, and has twice blocked the EU from issuing statements condemning China for actions in Hong Kong.

Last year he pushed Brussels to lift sanctions on Belarus, where a Ryanair flight was diverted last week so authorities could arrest a prominent journalist who has been critical of the regime.

Liberal Democrat leader Sir Ed Davey has written to Mr Johnson to outline 10 challenges the Prime Minister should put to Mr Orban during their discussions.

Sir Ed called on the Conservative Party leader to question the Hungarian prime minister on his links with Russia, his attempts to silence critical media outlets and for failing to hold ‘free’ elections.

He said: ‘We are extremely concerned that you have chosen to invite Prime Minister Orban to Downing Street.

‘Orban’s rule has been marked by a sustained assault on Hungarian democracy, on press freedom and on human rights.’

No 10 on Thursday condemned as ‘divisive and wrong’ comments made by Mr Orban ahead of his visit.

Mr Johnson has vowed not to shy away from bringing up issues surrounding human rights but Downing Street argued the meeting was ‘vital’ to Britain’s interests.

‘As president of the Visegrad group of Central European nations later this year, co-operation with Hungary is vital to the UK’s prosperity and security,’ said the Prime Minister’s spokesman yesterday.

Supporters of Stand Up To Racism plan to protest outside Downing Street, with spokesman Weyman Bennett arguing Mr Orban has been a ‘prominent spokesperson for the far right from a position of power as a prime minister of Hungary’.

Mr Kwarteng this morning said it was ‘absolutely right’ for Mr Johnson to ‘be building bilateral relations’ after Brexit.

Addressing Mr Orban’s remarks on migrants being ‘a poison’, Mr Kwarteng told Sky News: ‘I think Viktor Orban’s views on migrants are things that I would not endorse in any way.

‘Having said that, I think that we have to engage with the EU, he’s an EU leader.

‘Hungary is an EU country, we were part of the EU. And in this post-Brexit world, I think it’s absolutely right for us to be building bilateral relations with countries in the former EU.

‘I think it’s completely reasonable to do that, and not to do so I think would be irresponsible.

‘So it’s a diplomatic relationship that we want to develop.’

Coronavirus vaccine will roll out in Australia in March

Bitcoin is making a rather spectacular comeback, as BTC price soared 15% hitting $39681. After two...