It’s just gone 9.30am but Trevor and Joe are already enjoying their first pint of the day. ‘I’ll be voting Tory,’ Trevor, a master craftsman, tells me.

‘I voted Labour in the General Election, but we’ve got a Conservative council round here now, and they’ve done more in the past couple of years than Labour ever did.

Also, I used to go to school with a Labour councillor, and he went round wearing sandals. Sandals? When you’re a councillor?’

I’m in Darlington, sitting in the sunshine outside The Boot & Shoe pub and we’re discussing the local elections. Joe, a former tax inspector, is sticking, slightly hesitantly, with Labour. 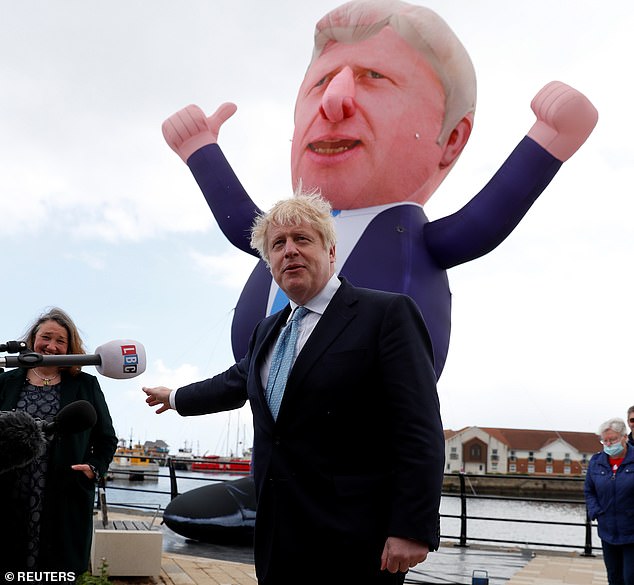 ‘I think Starmer’s doing OK,’ he says. Trevor nearly spits out his beer: ‘You’re having a laugh, aren’t you?!’

Over the past few weeks the eyes of Westminster have been on Hartlepool, the by-election framed as the defining test of Keir Starmer’s first year as Labour leader.

But several months ago a senior Labour insider told me Starmer and his team had set a different benchmark.

‘The Tees Valley mayoral election is the one they’re looking at,’ I was told.

‘They’re not saying they definitely expect to win it, but it’s a part of the country where they think they need to be making inroads to show they’re pulling things back in the Red Wall seats.’

But in 2017 the region was struck by a mini electoral earthquake when Conservative candidate Ben Houchen won the inaugural mayoral election by 2,000 votes.

Many people dismissed it as a blip, a short-term product of the 2017 post-Brexit upheaval. Until General Election night in 2019.

The job of leading Labour’s Teesside fightback is in the hands of local charity chief executive Jessie Joe Jacobs. She has been dubbed a ‘real rising star’ by one Shadow Cabinet member, and is running on a message of change.

‘Should I win, I will be the first female metro mayor in the country,’ her website proclaims. 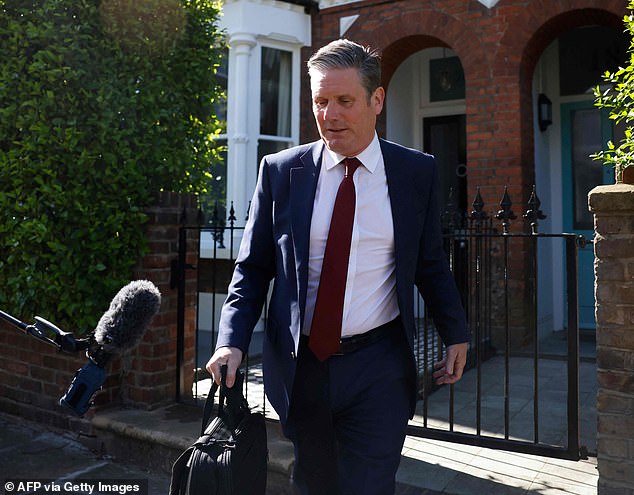 Over the past few weeks the eyes of Westminster have been on Hartlepool, the by-election framed as the defining test of Keir Starmer’s first year as Labour leader. Pictured: The Labour leader leaving his home on May 7

Unfortunately, on the day I arrive and try to arrange a meeting, a poll has just dropped giving her 37 per cent of the vote and Tory rival Houchen 63 per cent.

I receive a phone call in which she talks cryptically about important issues that have not been discussed by the media and which favour her opponent. I never hear from her again.

On the surface, the backdrop to these elections couldn’t be better for Labour. All those endless stories about Boris and Carrie’s wallpaper, topped off by the allegation that Johnson proclaimed ‘so be it’ when warned that his refusal to countenance a third lockdown would see ‘the bodies pile high’.

But in the shadow of Middlesbrough FC’s cavernous Riverside Stadium, metropolitan gossip collides with reality.

It’s here that one of the nation’s largest vaccination centres has been established, and the local residents filing out into car park E after receiving their jabs have a different perspective to the Prime Minister’s critics.

‘Boris is doing what he could,’ Louisa tells me. ‘It’s a very difficult situation. He’s been fantastic.’

Some Labour strategists have been pointing to the vaccination success as the primary reason for Tory buoyancy in the polls.

One Shadow Minister told me: ‘People are getting their jabs, the sun’s out and the pubs are open again. They’re going to do well.’ 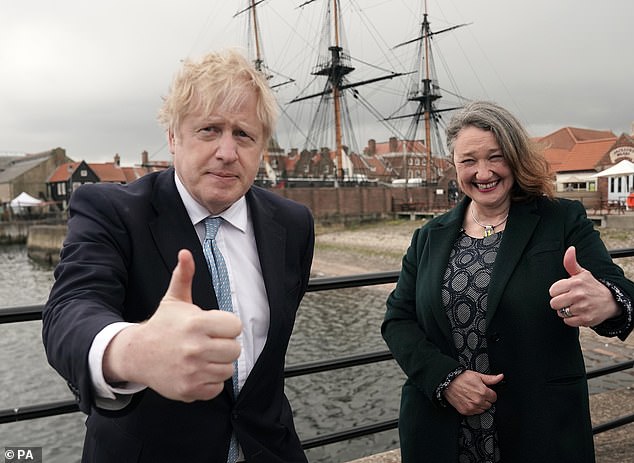 But as hailstones begin bouncing off my windshield and the gigantic rusting skeleton of the Teesside steelworks rises into view, it’s clear that deeper factors are in play.

Although it went into liquidation in 2015, the derelict Redcar plant is still a significant local issue.

Labour’s Jacobs has aligned with a campaign to retain the iconic blast furnace as a tourist attraction and monument to the area’s heritage.

Tory Houchen has warned the cost of keeping it would top £35 million a year and could put at risk new investment at the site and more than 800 new jobs.

As I walk round Redcar, it doesn’t take long to work out whose vision will prevail.

Martin is a locksmith whose father used to work as a shipwright in one of the local yards.

I ask him why, in an area with such a proud industrial history, a campaign such as the one to retain the blast furnace doesn’t resonate.

‘People are disillusioned,’ he tells me. ‘It’s too distant. They’re not invested in it in the same way.’

I ask if he – a lifelong Labour voter – shares that disillusionment. Although he’s no Boris fan, he admits he’s undecided how he was going to vote on Thursday.

What does he think of Labour’s leader? He responds with what I’ve come to recognise as The Starmer Shrug.

Heading out of Redcar, one thing becomes apparent – Tees Valley is facing serious challenges. But it’s not the apocalyptic post-industrial hellscape that some like to paint.

The Redcar works may be gone but, as you head towards Stockton, the giant cooling towers of the Billingham manufacturing works punch up through the skyline, while the drive out of Darlington brings you face to face with the monolithic new Amazon warehouse that employs more than 1,000 staff.

And this is what Boris – and Houchen – are betting their political lives on. That they can turn around decades of ‘managed decline’ under Labour and get the nation’s economic engine room motoring again.

Back in Hartlepool, the voters have started delivering their verdict. And again, another fashionable Westminster ‘narrative’ is running head-first into the British people.

You can’t currently buy a pint inside The Rossmere Pub on Balmoral Road, but you can cast a ballot.

And builder Geoff Rollinson is planning to deliver his for Boris. ‘He’s been amazing. I love him,’ he tells me. ‘What have Labour done for this town in over 50 years? Boris has pumped billions into furlough, he’s given people here a wage. Labour would never have done that.’

Outside Mill House Leisure Centre, Mark Robinson delivers the same message. ‘I voted Conservative,’ the charity worker tells me. ‘Boris is trying to get the job done.’

What about the furore over sleaze and bodies? ‘I wouldn’t want to be in his shoes with Covid and all the stuff he’s had to deal with. I think he’s doing his best.’

As I walk round polling stations in traditional Labour areas, they’re sparsely attended. But when I arrive at the Seaton Carew Sports and Social Club, close to where Boris paid a campaign visit, voters are queuing to get in. Joanne, a teacher, tells me why: ‘Boris brought us through the pandemic.’

It’s important to keep these election results in perspective. Excited political observers rushed to anoint polling day as ‘Super Thursday’, but to the vast majority of people I spoke to, it was just Thursday.

In their eyes this was not a transformative political moment, such as the Brexit referendum or the 2019 General Election.

Yet there are still fundamental lessons to be learnt. The first of which is that Keir Starmer has actually made some progress.

The fear and loathing Jeremy Corbyn generated among Labour’s traditional base has dissipated. But the problem for Starmer is it has been replaced by something potentially far worse – total apathy.

To huge swathes of the electorate, Starmer is not a threat but an irrelevance. It’s not that they think of him and shudder. They simply don’t think of him at all. 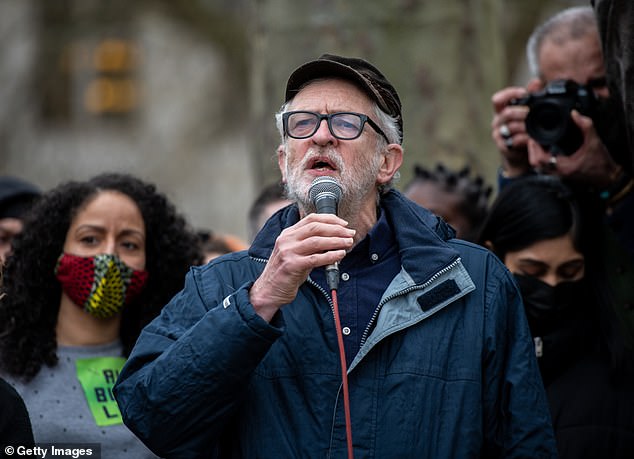 Which in turn could lead Labour to underestimate the true depth of the political hole they now find themselves in.

During my time in the Tees Valley, I didn’t encounter hordes of Labour supporters saying they were abandoning the party and switching directly to the Conservatives, but I did keep hearing the same resigned phrase – ‘I’ve always voted Labour, but this time I’m not sure…’

And this hesitation doesn’t reflect a further potential erosion of Labour’s base, so much as a jackhammer gouging away the party’s foundations.

Because these are the ultra-loyalists that are now expressing doubts and disenchantment – the hardcore who stuck with the party in 2017 and again in 2019.

If people who held their noses and voted for Jeremy Corbyn cannot stomach voting for Starmer, there’s no telling how much further Labour has to fall. Especially when they are faced with an opponent like Boris Johnson.

Yes, there were local factors at play. Ben Houchen is a popular and dynamic mayor. But this was Boris’s victory. Just like his London mayoral run in 2008, and his 2016 Brexit campaign and his 2019 Election campaign. He defied the odds – and the polls – and emerged triumphant.

Not that his enemies are any closer to understanding why. They are still so blinded by post-Brexit hatred that they are unable to see Boris the way the nation sees him.

In particular, they cannot grasp that rather than view him as a deceitful dilettante, the British people actually like him.

Not in the way they do a popular sports figure, or pop star. He’s a politician, and all politicians evoke a degree of suspicion.

But, for me, the drum-beat of this campaign was a rare empathy from the voters towards their Prime Minister.

‘He’s doing the best he can for us,’ was a phrase that got played back to me time and time again.

Back in Hartlepool Town Hall, the returning officer emerges to read out the results. The Conservatives have destroyed Labour, taking the seat with a 7,000 majority.

As I drive back down the A1, the radio announces the Tees Valley mayoral result. Houchen won 73 per cent of the vote, with a majority of more than 76,000 over Labour’s ‘rising star’ Jacobs.

Last week’s election represented Starmer’s first big test. He saw it as his opportunity to begin the fightback for Labour’s heartlands. He failed. Boris and the voters of the Tories’ North East Blue Wall saw to that.

The hatreds, tears and tantrums behind the ousting of Dominic Cummings revealed

Christian Eriksen-inspired Denmark advances to knockout round in Euro 2020