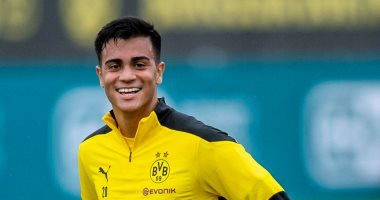 Borussia Dortmund officials are considering cutting the loan of Brazilian Reinier Jesus with the Royal and loaned to him from the ranks of Real Madrid.

Brazilian Reinier Jesus joined Real Madrid from Flamengo in January 2020, for 30 million euros, and was loaned to Borussia Dortmund, Germany, to gain experience and develop the technical and physical side.

And according to the German newspaper “Bild”, Borussia Dortmund plans to end the loan of Brazilian Reinier Jesus in the upcoming winter transfers.

The newspaper added that the Borussia Dortmund administration has given Brazilian Reinier until next January in order to provide a great level that gives him the opportunity to continue until the end of the current season, otherwise his loan will be cut off in January.

Brazilian Reinier Jesus participated with Borussia Dortmund in 254 minutes in the first season, and scored one goal.

On the other hand, the Norwegian Erling Halland, the talent of the German team Borussia Dortmund, ignites the struggle between Real Madrid and Paris Saint-Germain to include him during the next summer transfer period.

And the Spanish newspaper “AS” published a picture of the Norwegian talent, Erlind Halland, and confirmed that a conflict awaited in the summer 2022 transfer market between Real Madrid and Paris Saint-Germain over the kidnapping of Halland, who is expected to leave “Signal Iduna Park” at the end of the current season.

And the newspaper added that Real Madrid is putting Halland on his agenda to join the royal ranks, after resolving the deal of Kylian Mbappe, the Paris Saint-Germain wing.

Paris Saint-Germain will also enter with its financial strength to resolve the Dortmund star Haaland deal, in preparation for the expected departure of star Kylian Mbappe to Real Madrid at the end of the current season.

Paris Saint-Germain officials rejected the idea of ​​Kylian Mbappe leaving Real Madrid in the ending summer, and stuck to his stay until the end of the season.

Signs that will tell you that you are sick with a thyroid gland, most notably a swollen neck