Borussia Dortmund vs Augsburg.. 1-1 draw ends the first half of the Bundesliga match 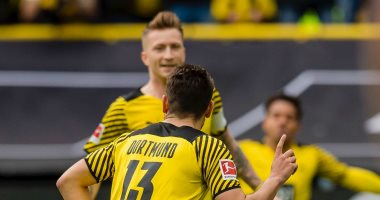 Borussia Dortmund ended the first half with a 1-1 draw with its guest, Augsburg, at the Signal Iduna Park, as part of the seventh round of the German League matches for the current season 2021-2022..

Raphael Guerrero opened the scoring for his team Borussia Dortmund in the 10th minute from a penalty kick, then Andy Zekpri equalized for the Augsburg visitors in the 35th minute of the first half.

Borussia Dortmund occupies fourth place with 12 points, one point behind runners-up Leverkusen and Wolfsburg, while Augsburg is in 15th place before the last three in the standings table with 5 points..

Borussia Dortmund entered the match with a formation:

While Augsburg entered the confrontation with the formation:

The young Norwegian, Erling Halland, missed the match against Augsburg, due to injury, after he missed the two matches of Borussia Moenchengladbach, in the last round of the Bundesliga, and he also missed the victory over Sporting Lisbon in the Champions League..

Haaland is the top scorer in the German league this season with 7 goals, equal to the Polish star Robert Lewandowski, the Bayern Munich striker..