BOY, 12, set to make history as the youngest person to study aerospace engineering at Georgia Tech


Boy, 12, who was accepted to MENSA at age three is set to make history as the youngest person to study aerospace engineering at Georgia Tech and insists ‘I’m not really smart, I just grasp information quickly’

A 12-year-old boy is set to make history as the youngest student to study aerospace engineering at Georgia Tech.

Caleb Anderson is expected to gain admission to the prestigious university this fall after meeting with the school’s president earlier this month.

The tween prodigy, who hails from Marietta, Georgia, has stunned administrators with his advanced knowledge and his ability to assess and retain complex information.

‘I don’t think anything Caleb has done has been normal for us,’ the youngster’s mother, Claire Anderson, told CBS This Morning on Monday.

Caleb began mimicking his mother’s speech when he was just four weeks old.

By the age of two, he could read the Constitution. At age three, he gained acceptance to MENSA.

In addition to English, Caleb is fluent in Spanish, French and Mandarin.

‘I’m not really smart, I just grasp information quickly,’ a modest Caleb told the news program, which followed him on a tour of Georgia Tech.

Caleb Anderson, 12,  is set to make history as the youngest student to study aerospace engineering at Georgia Tech

The prestigious university, which is located in Atlanta and currently enrolls just over 36,000 students, is known for its aerospace engineering program

‘I have this distinct memory of going to a first grade class and learning there, and everyone was way taller than me, because I was two – I could barely walk,’ he hilariously added.

Caleb – who hopes to attain an internship with Tesla founder Elon Musk – advanced to middle school quickly, but his teenage classmates were far from welcoming.

‘The kids there, they kind of looked down on me, they treated me like I was an anomaly,’ he stated.

Caleb went on to complete high school by the age of 11, and he has been studying aerospace engineering at Chattahoochee Technical College for the past year. 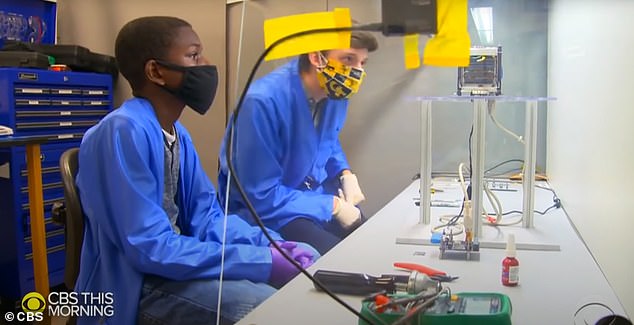 However, his parents were eager for him to have a more holistic college experience at Georgia Tech.

They also want to make sure that Caleb learns important life lessons outside of the classroom.

‘We want to make sure that when he is an adult, he’ll make a great husband, a great father, a great friend,’ the couple told CBS this morning.

Mom Claire has a Master’s degree in education, while dad Kobi is an IT salesman.

While most parents are still helping their 12-year-old children with homework, they are no longer able to help with the complex assignments Caleb is completing.

‘Both of us are not rocket scientists,’ Claire told USA Today earlier this year.

‘We had to learn there are other things that we can teach him about compassion, kindness, and looking for good in others’.

Author got down to discover what’s really a pure excessive